Lately we’ve been doing this new thing where we’re like super prepared before all of our shoots. We’re like, all professional and stuff.  So if you know the entertainment industry, you know that it’s not a rare occurrence for a shoot to have early call times. So that’s like a thing we’re doing now, early call times. Sometimes, if like, we have to.  This was one of those times.

It seems that it’s a decent plan of attack, because now when The Van does its doesn’t want to start thing, and Spud does his “aaah it’s all good, she gonna start,” thing, we don’t have to do our get nervous that we’re gonna screw up the shoot thing.  All of those things happened on this foggy Los Angeles morning, but like I said, we were over-prepared.

The destination on this day was about an hour’s drive North on the Pacific Coast Highway.  A campsite called Leo Carillo that’s well known to Los Angelinos who like to get out of the gridlock for a night and drink beers in front of a campfire. There was nobody at the gate when we arrived and so we bypassed what we thought was going to be a $12.00 fee to hang out on the campgrounds for the day. That’s what the lady on the phone told us, so that’s what we believed.

We took spot 107, which my dog, RZA, immediately claimed in his oh so unique manner of claiming territory.  I followed behind him with a plastic baggy to un-claim his land before the first band showed up and stepped on his marker. 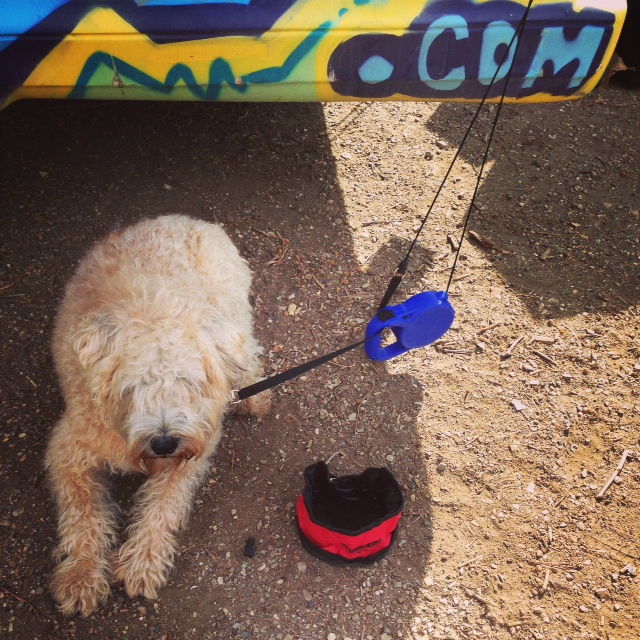 We did not have a Vegas Vacation situation this day.

That first band was an old friend of ours. The Dustbowl Revival were one of the first handful of groups that braved meeting us in a Venice alley three years ago.  Since then they’ve grown (LA Weekly named them 2013’s best live band), and we’ve grown (you’re reading this ain’t ya?), and it was pretty cool to get to do a third shoot with them.  Three years is a long time for anything, especially when it involves music, so here’s to doing it again in another three (Jam in the Jet patent pending). 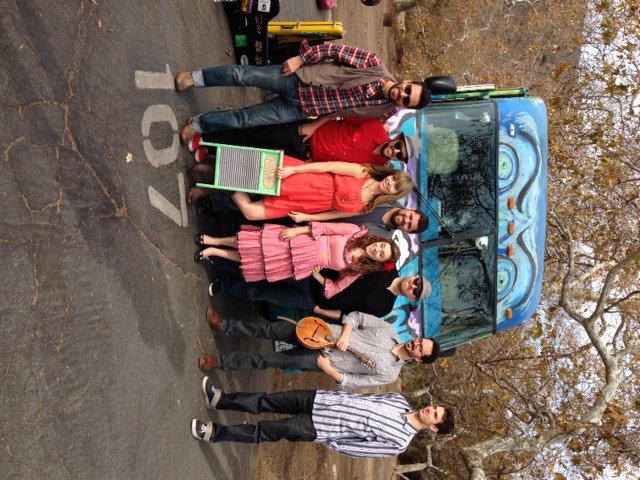 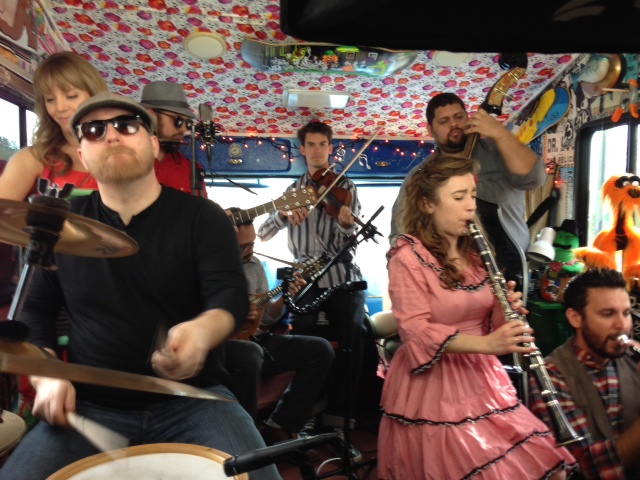 Our second act of the day was another band who we’re able to call our friends. The trio of dudes in The Record Company had a big year in 2013, playing on the same stages as some of their long-time idols, Buddy Guy and B.B. King, and coming to the realization that their passion project may have turned into a pretty legit band.  In looking towards that deservedly prosperous future we thought it a good idea to make a mini-documentary about the group, where they’ve come from, where they’ve been, and where they’re going. 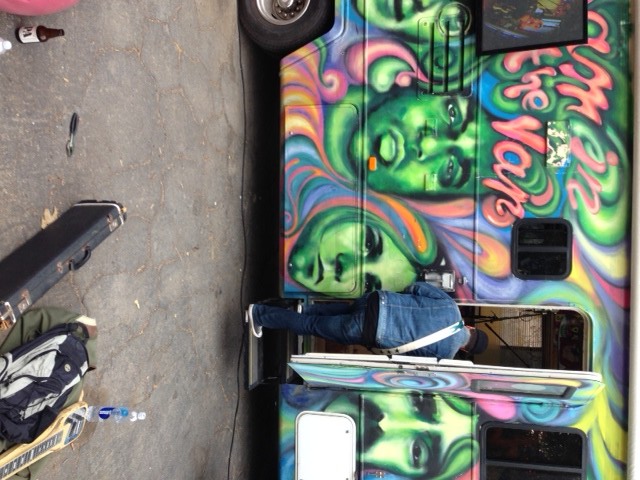 That all went swimmingly until one of the park rangers showed up and explained that we could continue to hang out if we gave him $45.00 and $12.00 for every additional car that was with us. It was a very unofficial exchange of funds for rules, but we got little yellow slips of paper to put on the windshield and nobody bothered us the rest of the day. So if it is actually $45.00 on top of the $12.00 per vehicle that we were originally told, then I guess that’s cool, they could have been much douchier, but weren’t, which is also cool. 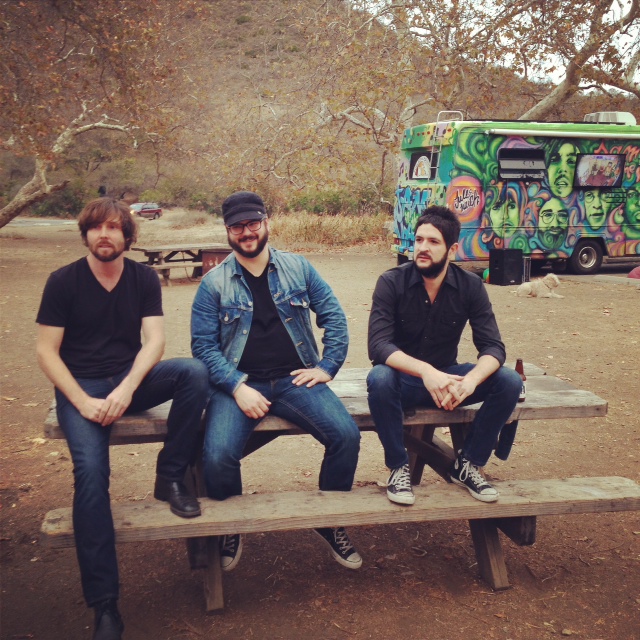 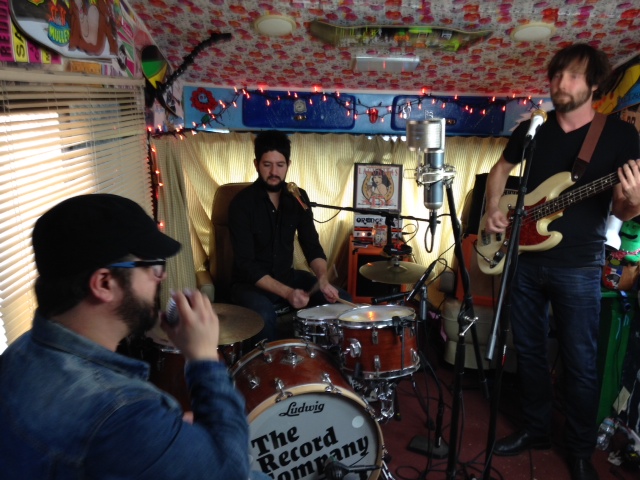 While we were figuring out the parking payment situation Spud stoked a fire by creating one of the most intricate fire pyramids that I’ve ever seen. He said the Pharaoh didn’t have shit on his pyramid. In the end, it burned well enough to cook our hot dogs and beans and we had lunch a’la Spud. Sans potato chips, because somebody forgot those, which I’m not saying is a huge deal, but I mean, just, well, it won’t happen again.

Never asleep on the job   because he’s a “professional”

After lunch it started to get “California chilly,” so it was a good thing that we wasted most of our fire wood cooking lunch/had good music to keep us warm, and also like, a long sleeved shirt. That good music came first from a fairly new unit who took a very similar drive as us in coming from Venice Beach to Malibu that afternoon. Grizfolk has only been doing the thing for about eight months but they had enough buzz for us to hear their jams and they’ve got the type of sound that could catch on quick once it hits the wind and blows in peoples’ ears. Dare I say the Mumford effect. Yeah, I dared, I feel a bit nauseous about it. I apologize dudes, we really enjoyed hanging out with you and drinking Lagunitas with y’all, see you around the hood. 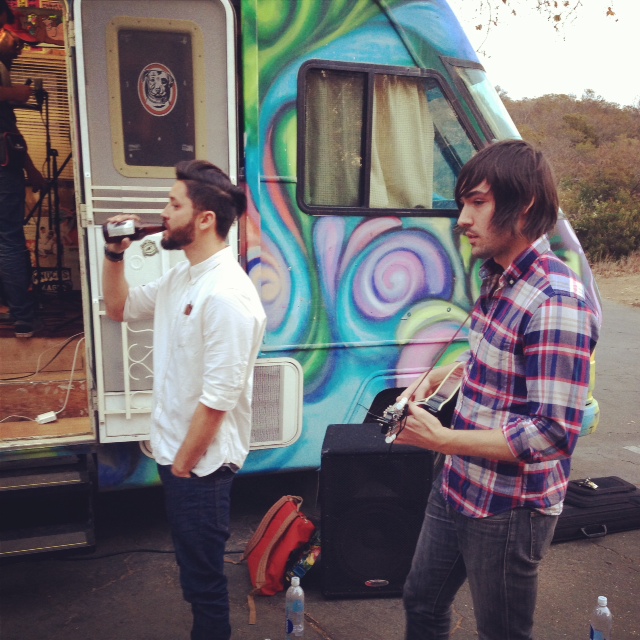 The final group for this shoot was Goldstar, and the fact that it was a group was a surprise to me.  I’d seen Goldstar’s video for “Back to Me,” and I was captivated by it.  We’d been looking for a time to invite what we thought was the solo act out to jam in the van, and this was a perfect opportunity. When Goldstar showed up in Malibu they’d magically morphed into a three piece band.  That folks is what we call a bonus. So we got three dudes who strolled up to the campsite looking like some cool musicians from the 1970’s. Leather jackets, boots, smoking ciggies, they had that cool vibe to them that sometimes is accompanied by the presumption that they’d be unapproachable. They weren’t that at all, in the least.  Just some dudes who like to drink beers like the rest, only they dressed like it was the 70’s and it worked for them. 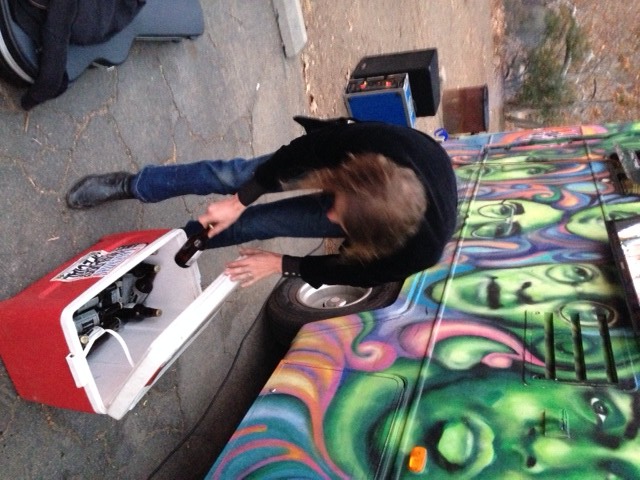 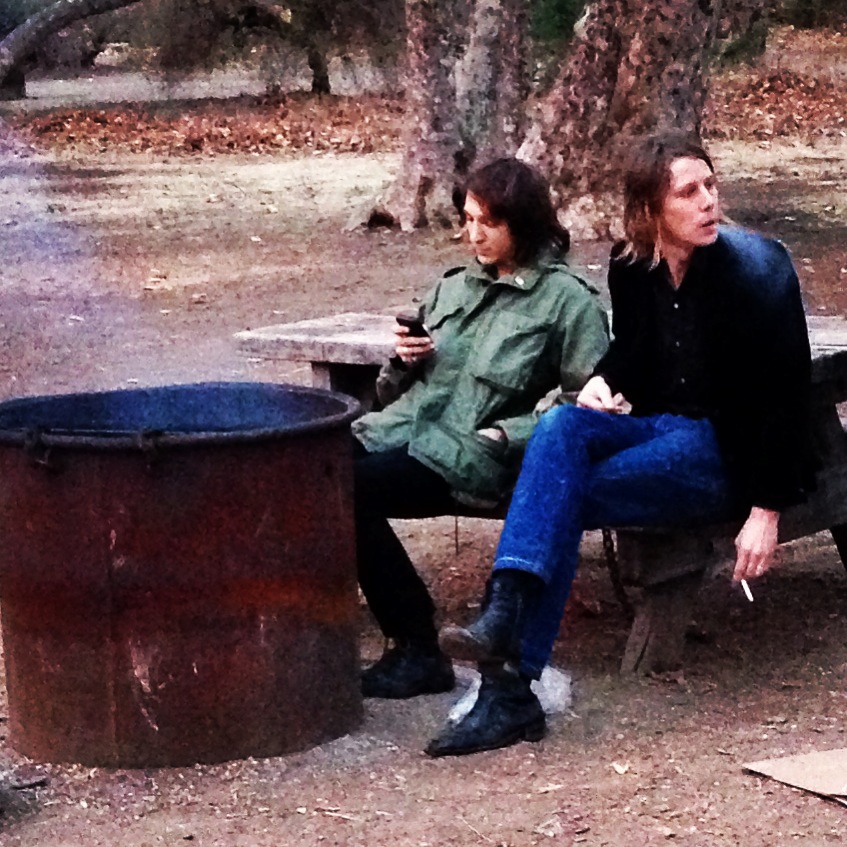 Come to find out that Goldstar as a three piece is just as good as Goldstar as a solo act, and so once again, we went perfect for the day. Four acts, all heady. 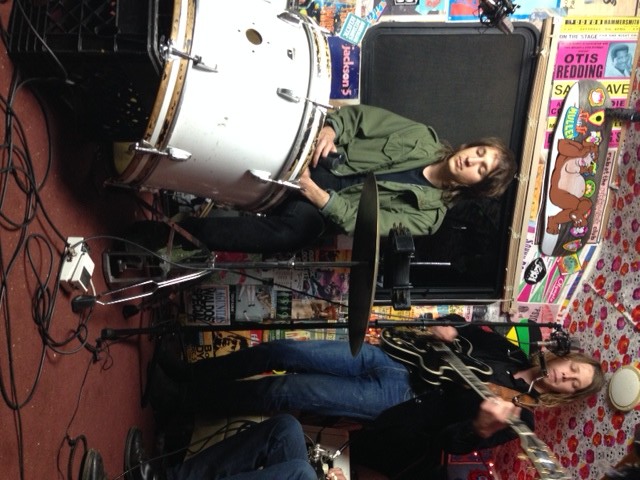 We packed up our gear, and Spud only yelled at us once during clean up for having him lock up the Van’s under-carriage prematurely. Once is a pretty good number to get yelled at by Spud. Zero just wouldn’t feel right. Almost like how we’ve had two shoots in a row without any catastrophe or wild occurrences. It’s nice, but I’m not quite sure it feels right. It’s almost like were playing with fire. To be determined when we get burned… 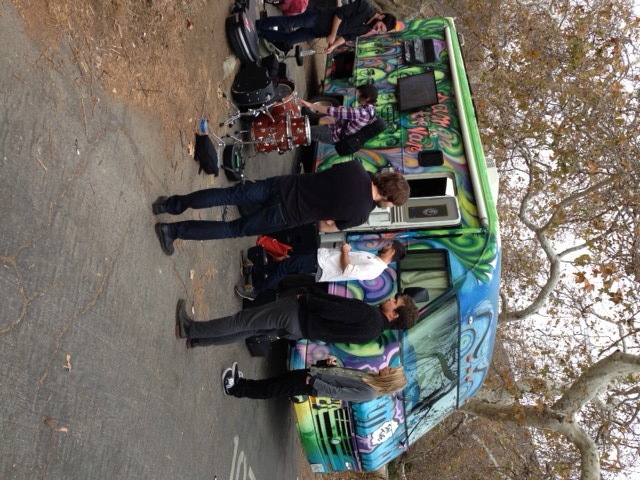 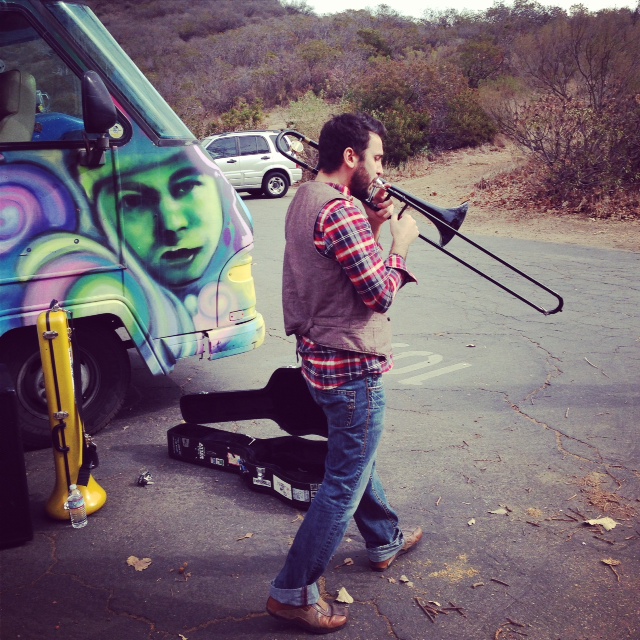 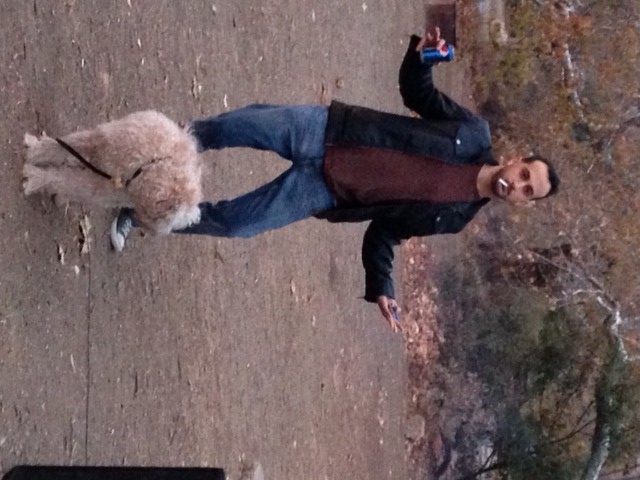 RZA sees you camera man… he sees you good.