Way Over Yonder, Which Happened to be Just Down the Street…

Way Over Yonder was not so far off yonder for the Jam in the Van team. The festival took place on the Santa Monica Pier and the van makes its home in Venice Beach, it’s about a five minute drive between the two. Now, it wouldn’t be Jam in the Van if we didn’t have some sort of trouble getting to our destination, regardless how short the trip is. So on this day the boat wouldn’t crank when we pulled the chord. This isn’t so much alarming at this point as it is annoying. We knew the deal, something is f’d with either the battery or the alternator. Way Over Yonder kind of snuck up on us, so we didn’t have time to get a lot of stuff handled that we should have handled after our return from Telluride Blues and Brews. The price we paid for this was about thirty minutes of our time standing in the middle of the street waiting on a jump to kick our battery over. 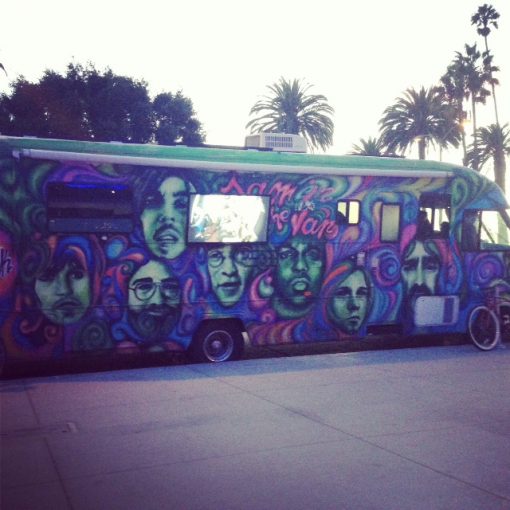 Palm Trees for days yo.

When that engine roars, it is an impressive sound. When she’s awoken old girl means business. So we rambled down Lincoln Blvd., took a left onto Pico Blvd., then a right onto Ocean Ave., coming to a stop in front of The Shore Hotel, located almost directly across the street from the entrance to The Santa Monica Pier. I’d spent about three hours of the Thursday prior securing temporary tow away zone signs for two of the meters in front of the hotel so that we could park there for the weekend. Given that we live in Los Angeles and we know how shiesty the parking situation is around here, the thought did cross my mind that it was not as simple a task as hanging up a couple of signs, to park our technicolor dream wagon in those two spaces for two days straight. It of course wasn’t, as we spent several a moment dealing with either angry valet’s, angry cabbies, confused traffic officers, confused hoteliers, or confused restaurant managers. We didn’t get towed though, so that’s a win.

On Saturday we jumped into our sessions with Brett Dennen. He’s a local boy, singer songwriter type, and he was one of the top billings on the festival’s line-up that evening. He was super polite, a soft spoken dude. The loudest thing about him was his orange and red Hawaiian shirt, which matched the Jam Van color scheme pretty well. He let his guitar and his singing do the loud talking for him and that was just fine by us. Our next guest didn’t get to do that. 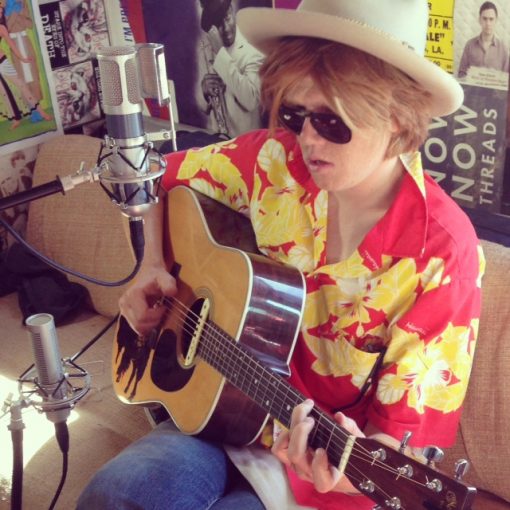 That guest was Neil Casal and a lady accompaniment whose first name, Lauren, was all I got. That’s because this session was cut short due to the heat. Our overhead AC unit wasn’t working, and it was a ninety-degree October day in sunny Southern California, and our roof is covered in solar panels. So the van was kind of acting like an oven and Neil wasn’t trying to drop weight in our sweat box, so we called it a day. I’m sure some of our Bonnaroo bands, The Mowglis, Stoplight Observations, a long list actually, would speak to how cathartic a sweat in the van can be, but the step out was completely understandable given the temperatures. On the positive spin, it prompted us to go and purchase a stand-alone AC unit for day two. Thanks Sears, for being the only place in all of Los Angeles that sells air conditioning units year round. 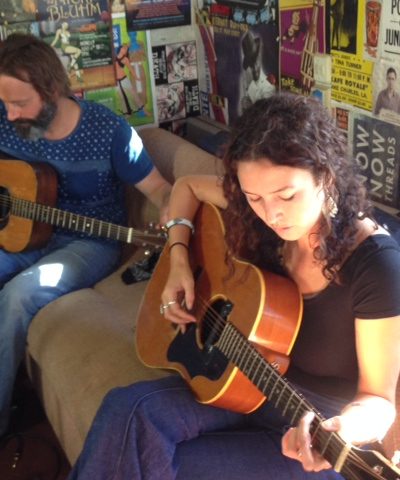 Rain check on this one…

The early wrap time sent us down to the pier to hear some live music outside of a van. We took in Calexico, a moment of Neil Casal in the Carousel Stage and Neko Case closing out the first night of Way Over Yonder. 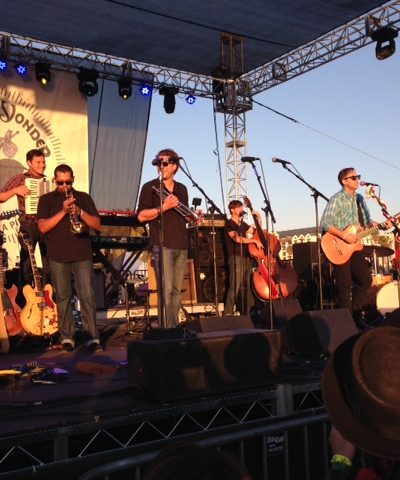 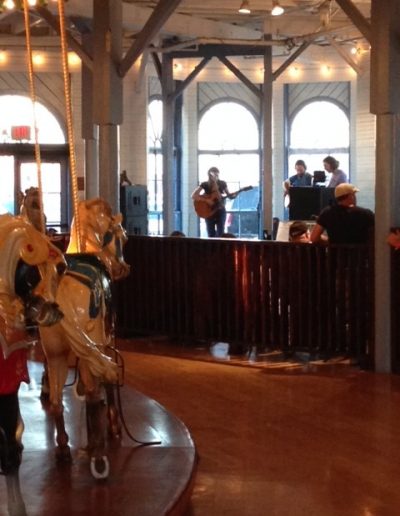 Look at the horsies… 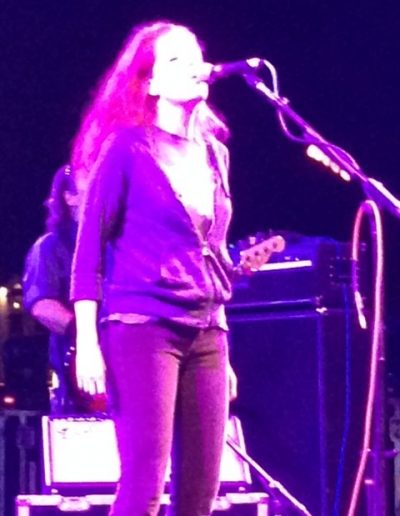 The pier is a unique place for a show. You get the seagulls and shit, the wood slats to stand on, it’s a pleasant change up from your typical festival scenario, you know, a field. The Carousel Stage was a fun touch. Very intimate, people sat on the floor in the corner of the room to watch performances right in front of them. The stage was only raised about a foot or so off of the ground. It had a sing-along kind of vibe, with the backdrop of a spinning carousel. So a mellow atmosphere was created within the makeshift walls of the event. All the chaos of the pier and Ocean Ave. was quelled, and festival-goers were encapsulated inside of a folk fest. All signs pointed all eyes towards music, and all eyes and ears in attendance dutifully obeyed. 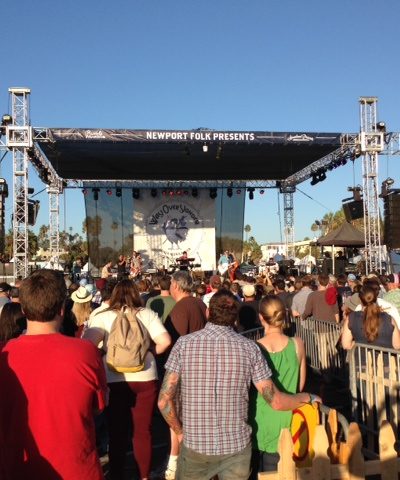 Day two opened at the Van with one of our most highly anticipated sessions in oh, I’d say two and a half years. We’d met The Felice Brothers a couple of years prior at Fun Fun Fun Fest. At the time they struck us as really easy going fellas who drove an equally bad-ass RV. We didn’t have the van with us that day, just some cameras and a microphone for a chat, but I distinctly remember our parting words to them being that one day down the line we’d get them to jam in the van. It’s nice when things come full circle like that.

When it did happen, they were just as chill as the first time we’d encountered them. Totally appreciative, they thanked us just as much as we did them, which is always refreshing. LA can bare on your soul a little bit in that gratitude category. Folks don’t usually seem to see the need to thank a stranger for letting them pass into their lane on the freeway, and that blasé’ attitude extends to a lot of other aspects of life. So when we get thanked, we dig it. 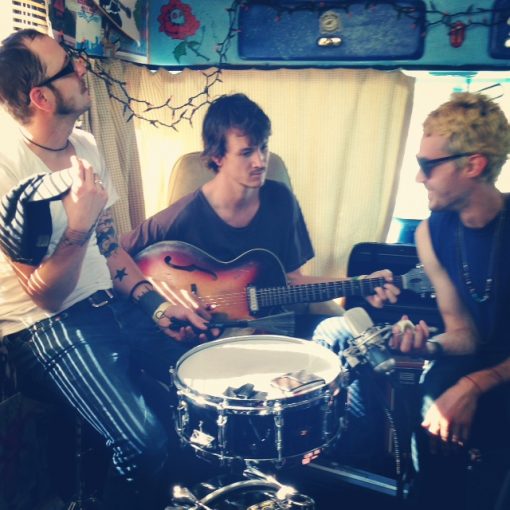 Deep thoughts with The Felice Brothers

The Felice Brothers were followed close behind by Spirit Family Reunion who waited on me to bike about twenty minutes away to get water for them, because we had run out, which is bad form on our part. I made it back in time to catch their last tune and to pour them some H2O, as they were all quite parched. 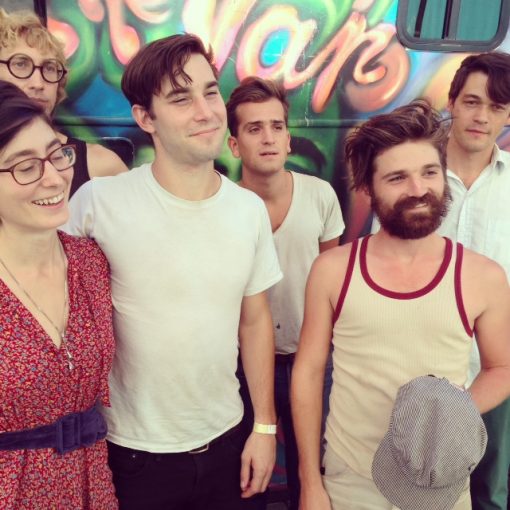 Our third act for the day was Aaron Embry, a dude whose show poster has been hanging in a very visible spot on the van walls for about a year. We probably snagged the poster at a venue or record shop somewhere, and by luck of the draw it got a good spot on our wallpaper, so we’ve stared at Aaron Embry’s name for a long time. Way Over Yonder gave him a chance to earn that spot on the wall.

Earn it he did. Sweated the shit out of that van. When he finished and I stepped inside to ask him to sign our wall, the first thing that hit me was that it smelled exactly like what it smelled like after NoBunny performed in the van. I proclaimed “it stinks in here,” and Aaron Embry fessed right up.

So he earned that spot on the wall with sweat equity, no doubt, and he got to sign that very same piece of real estate. 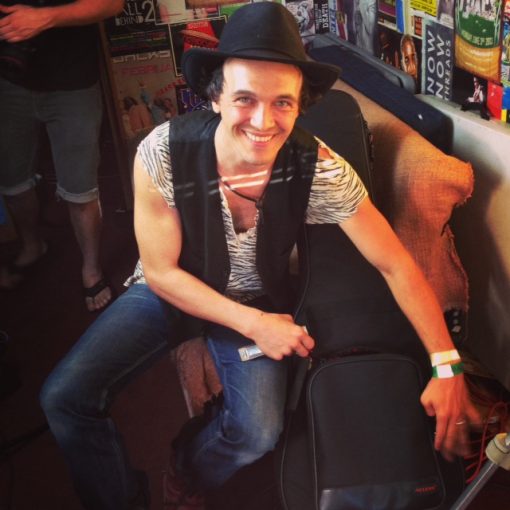 Our final act was some dude named Frank Fairfield. He brought along another fellow whose name is inconsequential. They both wore black slacks and blue button-downs. Mr. Fairfield’s short sleeved variety was buttoned to the top and tucked deep into a waistline wrapped well above his mid-section. They gave off a faux vintage look, like they were working real hard at making you think that they woke up and churned their own butter. They played some blue-grass and it was nice enough as far as blue-grass goes, but they were a sharp turn away from the polite and friendly musicians we’d encountered the rest of the weekend.

Every response Mr. Fairfield gave to our crew was mocking. He took the wanting to be in the 1920’s schtick far further than necessary, given that he drove up in a truck that was very much from the twentieth century, and definitely not a horse. If you know you’re going to shoot a video that uses video cameras and promotes itself via social media, but you prefer to make fun of all of those things, why shoot the video? I guess Mr. Fairfield had that same realization, only hours after the footage was already taken, as he asked us not to edit the session due to distaste with his experience, admittedly a first for us. Another first was his refusal to sign our wall (all artists sign). His given reason, which he told us without making eye contact and with a less then cunning grin peaking out from under his mustache,

To which I said “seriously, you’re not going to sign the wall?”

To which he said “it looks like you’ve already got plenty on the walls.”

So you see, we’re not heartbroken that Frank didn’t want us to edit his session. If I’m speaking out of line, and in fact Mr. Fairfield is a marvelous and kind person then I apologize and welcome stories to contend with my account. This is my take away based on the facts of one day only, so take it as such. 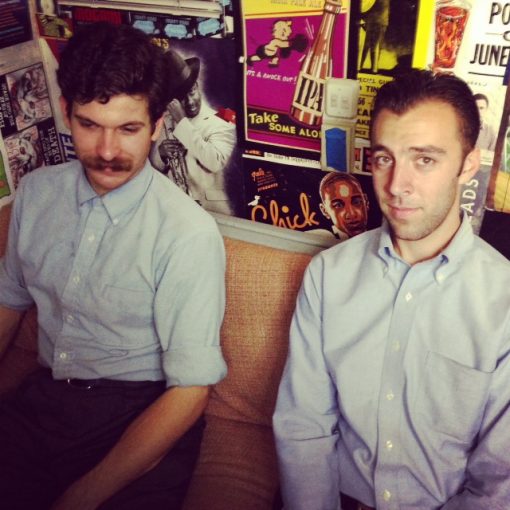 A look says a lot.

We caught a little bit more music on the pier to close out the festival. Jonathan Wilson invited Jackson Browne on stage to play with him, Connor Oberst brought up The Felice Brothers and First Aid Kit. That’s how the recounts of all the Newport Folk Festivals I’ve read always appear. Musicians joining together on the stage rambling through powerful memories that will stick with the crowds long after they dust the sand off of their shoes and take to their beds after the show. 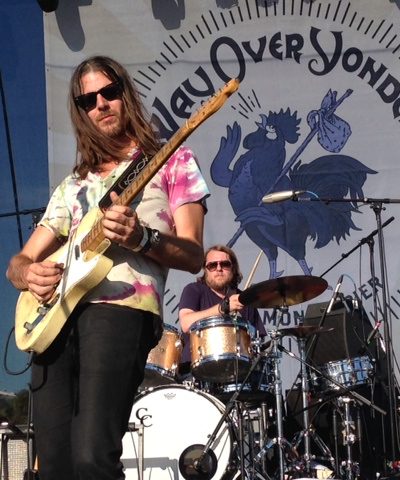 We’re confident, one bad experience aside, that we made some decent memories of our own at this inaugural edition of Way Over Yonder. We’re certain that we didn’t use too much gas to do that either, which is a huge plus in our book. Until the next bend… 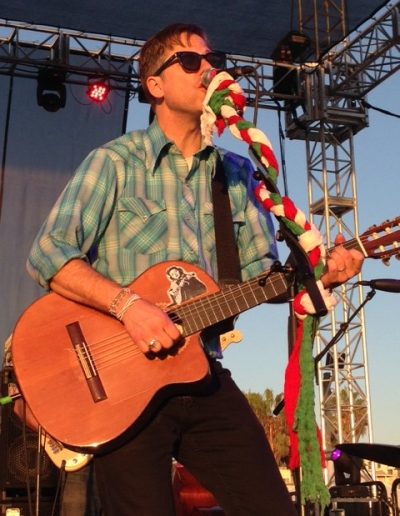 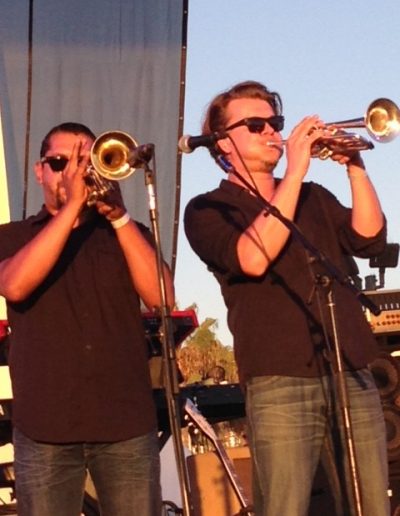 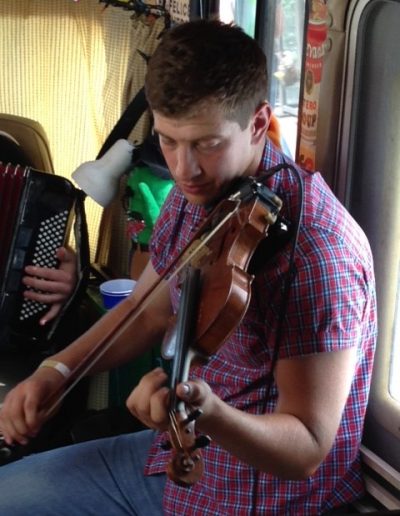 Headiest fiddler in the van to date. 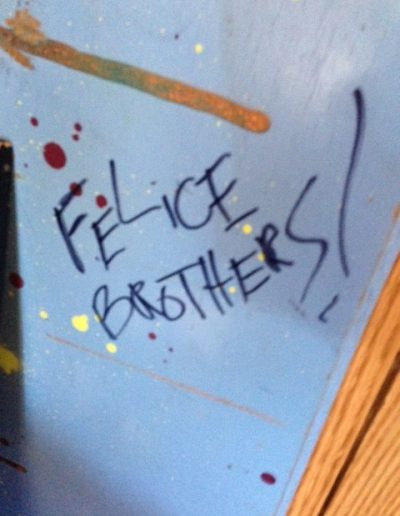 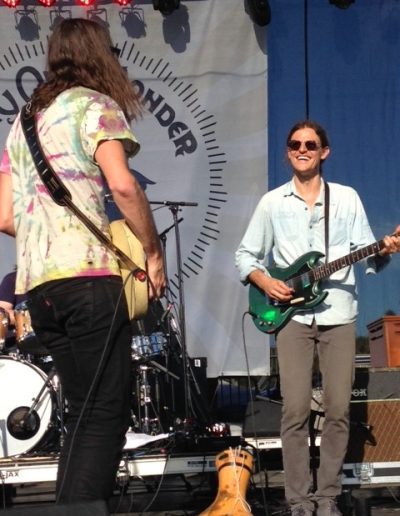 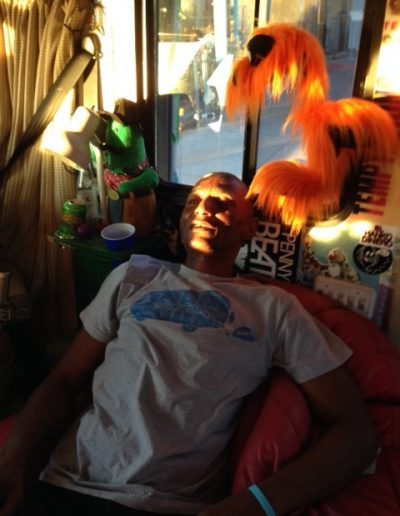 Spud had a rough weekend, good thing he’s got pals like Clyde Puppet and Raw Clyde the Cactus to take the stress off with.