To Hotlanta and Beyond

New Orleans is similar to Vegas in that if you are there as a tourist and you spend your time there properly, it can ware on your soul, and your liver as well. We did New Orleans quite proper this go around, and so when it came time to leave we were more than ready to hit the road. We departed the Crescent City under the cover of the last moments of night and we set our compass north for the state of Georgia. Five dudes, two dogs (one still more resembling a rat) and a Spud, headed straight through the deep south. Sounds like a hell of an adventure if we hadn’t had such a tight schedule to stick to. 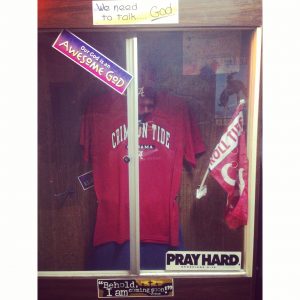 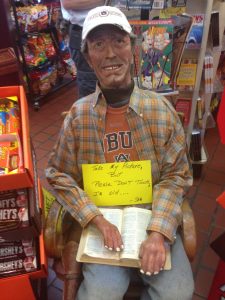 As it was, most everyone but Spud slept the entire drive, only arising to exit the van during truck-stop breaks. Spud likes to take those about every hour. I’ve said it once, I’ll say it again, the man really loves pumping gas. I’m happy to let him stop as many times as he wants as long as he keeps gettin’ us to where we’re trying to get to.

This time we were trying to get to Atlanta. Our Amplifier sponsor, Orange, has its U.S. homebase there, and so we asked them to line up some bands to jam in the van. First things first though, we had to find barbecue. You can tell a decent BBQ joint in the south by the size of their clientelle. This spot we went to had a replica cast from the family scene from Nutty Professor sitting on the porch . Although they were out of ribs (thanks “Herculeez! Herculeez!”) their rib tips were the size of a small animal, so we did alright. 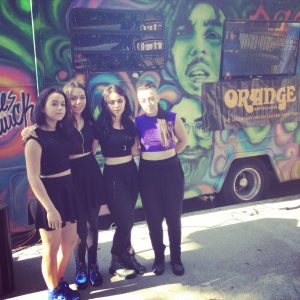 Sisters are don’ it…

We filmed the session outside of Criminal Records, which is like Atlanta’s hippest record store. It’s located in the Little Five Points neighborhood. This area is a high cruster zone, so we had a whole bunch of people standing around watching the session and hoping that at some point there would be free shit to be had. For real, one of them actually asked us to give him free food. We explained that was not what we did. He didn’t seem to get it, you know, because colorful RV with a band in it obviously means free food. So we gave him an Aquahydrate water to go away.

We took a few hours to catch up on sleep after the morning session. That meant heading back to our hotel which was conveniently located next to the Pink Pony Strip Club. I’d been to the Pink Pony before, it is the pinnacle of class. So too is the hotel next to it, where the clientelle are mostly strippers and their Johns and the elevator always smells like reefer. That is to say my dog and I had a wonderful stay.

Our second shoot location was Thunderbox Studios, which had far fewer crusters milling about. The first act of our first day at Thunderbox was Blake Rainey and his Demons, however only Blake Rainey showed up. It turns out that Mr. Rainey and a guitar is just as lovely as Mr. Rainey with his demons. 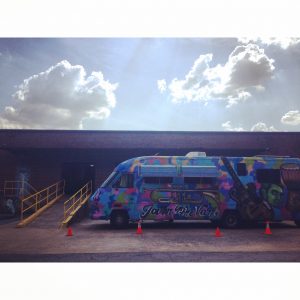 Grey skies are gonna clear up. 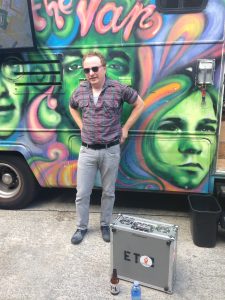 Next up was Zoners, a rambunctious punk rock unit who some might describe as crusters themselves, although crusters with musical talent are far more tolerable than crusters with merely, well, crust… They were a friendly bunch who seemed very intent on making sure we knew that we could party with them. The crew took them up on that offer, I opted instead to go eat tacos at what was described to me as “the Waffle House of Mexican restaurants.” We also got a good bit of Atlanta based gossip out of Zoners. Seems that one of their members had a knife pulled on him by one of the members of possibly Atlanta’s most (in)famous rock band. There seems to have been a woman at the center of this bit of gossip… 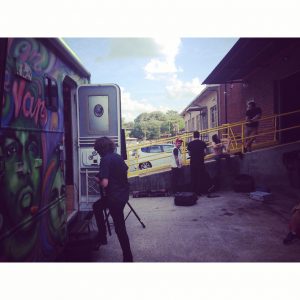 Please Please followed Zoners and surprised everyone who had gathered around to watch. These dudes had an extremely unique sound, and although it’s weird to say they are unique and then compare them to another band, they did come off a bit My Morning Jacket-ish. Which is never a bad thing. 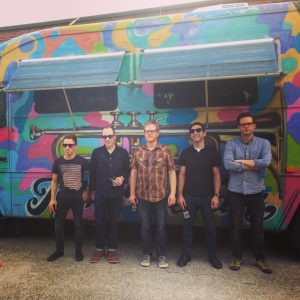 They’re all about the same size.

Last on day one was our second all female act of the day, Shantih Shantih. Rocker chicks indeed. They drank beer good, and they had a member of the Black Lips come out and watch them. Spud told me he was going to ask the Black Lip in question (the bassist) why they called themselves the Black Lips, seeing as they are all white. The response he got was that they started the band so long ago that they’d all forgotten why they called it that, but that it most likely had something to do with being Rolling Stones fans. At any rate, I tweeted something out about this conversation, and I guess I was off on the exact wording of Spud’s question, and so said bassist took offense and now I guess Jam in the Van has Twitter beef with Black Lips. I think I am OK with that, and it’s as rock and roll as Twitter beef can get, right? 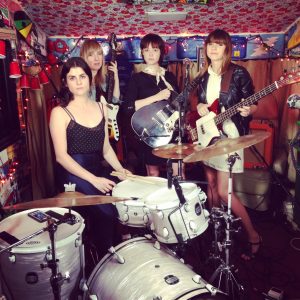 The next morning I shared breakfast at the Waffle House with Spud. A lot of people out there swear by the Waffle house, I think it’s gross. To each their own. My eggs that day sucked, which I take for standard at the Waffle House. I know, I know, I’m crazy. Please people, America’s fascination with this food troth is less fascinating than it is depressing. I can’t say I’m befuddled by it, because people in this country knowingly and happily eat pig slop for three meals a day everyday, but it is certainly fucked up that congealed eggs and cardboardesque waffles have developed such an adoring following amongst both educated and undeducated masses.  It speaks to something, but that is for an entirely different publication. 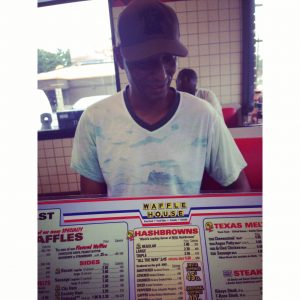 Breakfast aside, it was back to Thunder Box for us, where we met up with a band that multiple people had told us we had to film, New Madrid. They were in town from Athens to play at the Shaky Knees festival, and in line with their many recommendations they were a very talented group of musicians. It must also be noted that each member of the band had long hair, which albeit used to be a common thing amongst rock bands has seemed to wain a bit amongst current trends.  One member didn’t have your typical long hair. Instead he had a white boy afro which he said he’d been maintaining for quite some time and was rather impressive for both its volume and radius. Hair styles aside, the music was excellent. 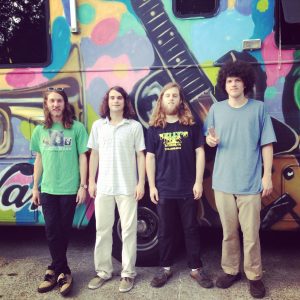 See how the fro just blends in.

Our second act for the day was Anna Kramer, who had played guitar for us the day prior in Shantih Shantih. This go around it was just her and a drummer for her solo project. Spud was a huge fan. I have not seen him hug someone so profusely in quite some time. He does indeed like to talk to white girls. 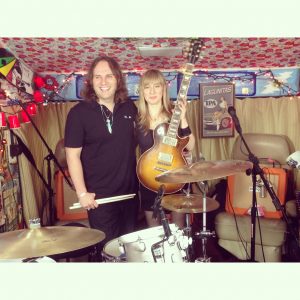 The last group for the day was Eel Pie. There isn’t much to be found on the interwebs about this band. Their social media accounts, of which there are few, lack much of a following, which I must assume is due to their relatively recent beginnings. They are far too talented musicians for that to be the case for long. Their music is a throw back to straight sixties rock and roll, which can be garish if not done proper.  Yet here we find a four piece that most certainly holds their own, both in talent and sound. Let this be a sounding point for you to follow their pages and grow their support. 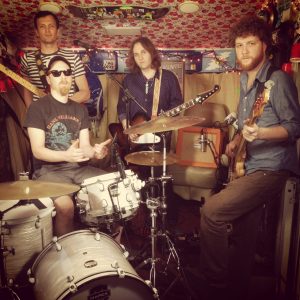 They look the part.

Eel Pie’s set ended with ample time for me to make my way to Atlantic Station in time to catch The National at the Shaky Knees Festival. The area where the festival took place was basically a glorified outdoor shopping mall. The stages were set up in the parking lot, there were two of them, the main stage employing the tactic of having a double stage so that while one band is performing another band can set up. This is a good technique that allows for no lag time between sets. The festival grounds were a bit sparse, two food trucks, a whole bunch of liquor and beer stands, and that was about it. If you were hungry you walked up to the shopping area and foraged at what was essentially a fancy food court. I myself found a spot with gluten free fried chicken that pretty much made my night.  I’m pretty easy sometimes.  Oh, and The National were pretty cool too. 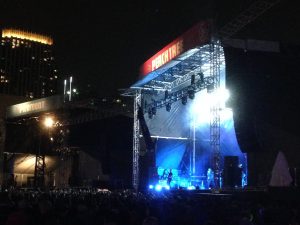 I guess I’m getting old, or hanging out in a parking lot just didn’t do it for me, so I called it a night early, kind of embarassed to say that I skipped out on a late night Deer Tick show, but sometimes sleep trumps all.

It had been a long few weeks and we had just one day left. Back to Thunderbox we went. Four to go.

Four, Claws ATL, a charming bunch, I believe the Jam Van was their first official live show together. 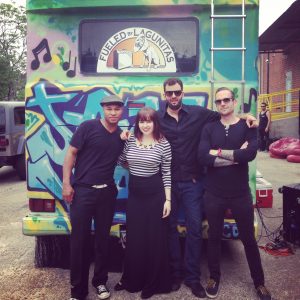 Three, Kameron Corvet, dude is smooth and apparently kind of a big deal overeas. Here’s to hoping he gets some hype on this side of the globe. 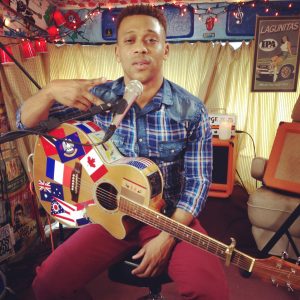 Two, Larkin Poe, the sisters who fronted this band were certainly not tough on the eyes, and pretty good at strumming their guitars. Southern hell’s belles indeed. 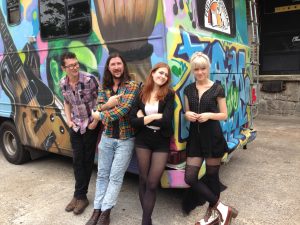 See, they ain’t rough on the eyes.

One, why not close it all out with something loud? Gunpowder Grey, proving once again that no matter how big or how loud the band, the Jam Van can take it. After three weeks of non-stop filming in the south, some intense rock was just what we needed. Blasted it loud one last time, gave away the rest of our Lagunitas, put the bean bags back in the van, and called it a trip. 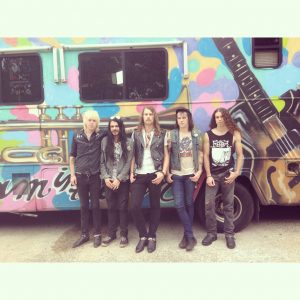 Atlanta is a big town, we only tapped into a tiny bit of it on this ride. So we’ll have to be back, and not just because we didn’t get the ribs this go around… 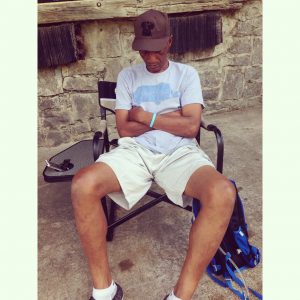 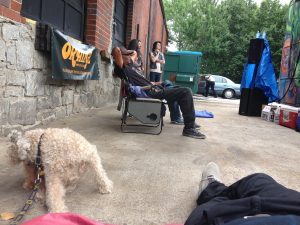 When the dog scratches his ass it’s time to go…