Waking up is not that tough of a task when you’re sleeping on dirt in a tent with no cover save for a fine mesh netting, that does nothing to stop the sprinkles of light rain that seemed to find their way inside every morning.  Not enough to ruin anything, but just enough to make further slumber impossible.

The hardest issue with sleeping about eight heads to a spot is the bathroom use.  You’ve got to have your business timed correctly.  I struggled with that.  Every day of the trip.   Yet I survived and lived to truck it downtown via bicycle, Jonny and Chach-Man by my side.  We hit the convention center to check on the team.  We were now Wolf-less, but reinforcement heads were scheduled to arrive later in the day, so our sorrow was short-lived.

The Jam Van’s morning began with a band that I have personally listened to since the start of college.  Which unfortunately was about ten years ago.  Tea Leaf Green’s set was again an example of why we wanted to build a Jam Van.  This was music we love that we want to capture and share.  They did not disappoint.

They were followed by a group of young dudes from Indiana whose tunes I have also dug for quite some time, HotFox the band.  They liked us on Facebook, I followed them on Twitter, that’s how stuff happens nowadays, and it was pretty cool when I twitted at them and they twitted back, and we speculated on the prospects of them playing the van at some point, and then they won a Jansport contest to get them to SXSW and they came by and ripped the Van apart.  Nice dudes, real nice dudes.  I hope you guys make it out to Venice and hit us up.  We’ll rage.

The closer set was Crocodiles, they fuzzed.  It was heady.

My wanderings outside of the Convention Center took me quite a few places this day.  We started off with some random street teaming.  Me, Jonny, the Chach, and our former intern Zeke (ed. note: former cause he got a real job) (ed. note: real jobs suck the fat one).

We walked the stroll, pounded Wolf Water, and then found our way into the MTV Woodie awards where we caught sets by Gary Clark Jr., Chiddy Bang, Fun., and some bands whose names I don’t know and who sucked too hard for me to care to look up.  The Woodies were cool though.  They had that undeniably corporate feel that I’ve come to associate with MTV, and when those corpos are feeding you free BBQ and booze, well they ain’t half bad at all.

It got cold though, and we needed to get warm, and the beer line was long, and they ran out of free saki, so we needed a new destination.

Our Buddhaphest met up, as did our freshly arrived from Humboldt Geologist, and we made tracks, first to the Wolf Water store, then to the Bandpage + SuperGood Music + the Roxy showcase at Empire Automotive.

The line-up that night featured two Jam Van veterans, The Peach Kings and The Stone Foxes.  I gotta say, and this is in all honesty, The Stone Foxes may have been the best show I saw at all of SXSW.  Those guys play rock and roll the correct and proper way.  They get people moving, they get hands clapping, they get feet stomping, and the result is a good time.

Of the other acts that night, what I remember was Das Racist and Doom Tree.  Das Racist was loud, really loud.  Even Chach was unimpressed, and he is about as close to a Das Racist aficionado as anyone I know.  They had removed a good deal of the beanbag chairs that had been situated outside of the venue to use at another venue.  I learned this because when we had approached I saw a bus painted with a red, yellow, and green flaming lion that looked identical to one that I knew roamed the streets in our hometown of Venice.  All my companions that evening doubted me when I pointed it out, but low and behold, our old friend Udi, owner of the Love Shack Bean-Bag Chair Store and Art Gallery, popped his curly Israeli head out of the bus and said what’s up.  It was a relief to know that Udi really is the only dude who distributes beanbag chairs in the Twenty-First Century.

The last act of the night that we were concscious for was Doomtree, a Chach SXSW must see band.  They did not disappoint.  When they dropped their hit “Bangarang” Chach had his arm waving up and down so hard he could have put out a fire.  We gave it til the end of that song and then those of us remaining stumbled out into the green laser filled streets of Austin, found our bikes, and somehow made it back to our tents and hotels.  All except Jonny, he found a Raven, and that evening he was heard from “never-more…”

Other Highlights: I got accosted by a thing that I could best describe as a disgruntled hipster hobbit.  He was roughly 4’8” tall, bald, and wearing a Kangol Cap.  He stood in front of the Buddhaphest and I while we waited for food from a sandwich truck.  I was asking Buddhaphest if there was live performer on stage because I couldn’t see that far.  The Hipster Hobbit (HH) apparently took offense to my lack of auditory skills and began to mock me about not knowing if there was a live performance taking place.  When he started freaking out on me and asking if I was serious the best I could think to respond was by feigning like he was hearing things and telling him that he needed to hydrate and lay off the hard drugs.  This had the effect of making him even more irate, and he began to spit from his mouth and declare that “you’re not as smart as you think!”  I guess he must have been working for Bandpage or one of the other companies involved, because he went to every door and tried to have the bouncers throw me out.  The bouncers must have been just as amused by the HH as I was, because I got to stay, how else would I have seen Doomtree?  Anyways, he also unsuccessfully tried to get the lady in the food truck to spit in my food, and in the end he apparently took out his aggression on a chick, because I caught him aggressively throwing a girl out at some point in the night.  To that pug-ugly little man with the aggression problem, cool your Napoleonics out little fella, it’s all just a head show.

Track for the Day: “Bangarang” by Doomtree… Duh… It’s on their latest album, No Kings. 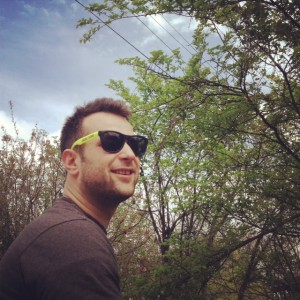 Captain of the Street Team taking it all in before another full day... 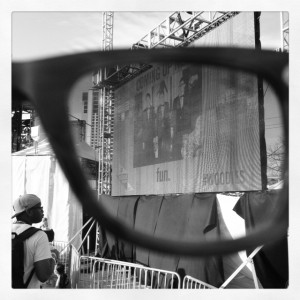 Fun. was both seen and had at the MTV Woodies... 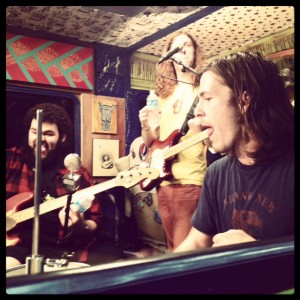 The dudes of HotFox... Heady personified... 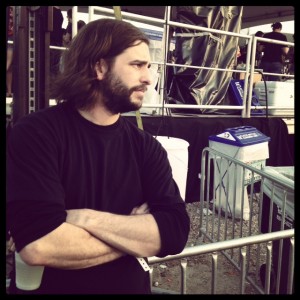 The Geologist in Black Arrived! #HEADY 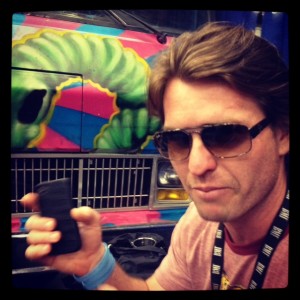 The PH was callin' his "girl" Meiko here... He was feelin' pretty good about that and about going to her show later that night... I went ahead and skipped that one. 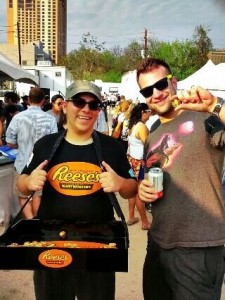 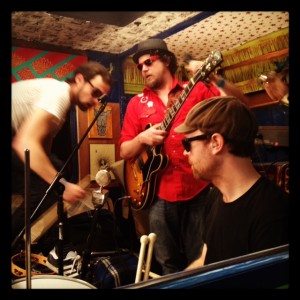 Tea Leaf Green warming up in the mornin'... 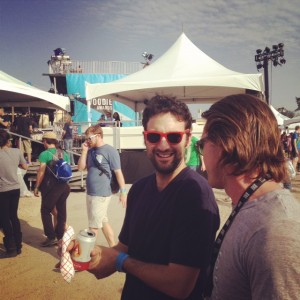 That's my boy Josh. He let use house our whole crew in his sweatshop of a basement. It was awesome. Josh, much, much, much thanks... PS. I'm sure the PH is saying something inappropriate right there. 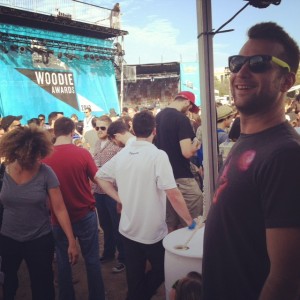 He's laughing because he's refusing to point at his junk... Again, worthless.

Further…  Seriously, it’s gonna get really, really, really further by the time all these days are recanted, y’all have no idea where I’m typing this from, it’s heady, but it’s not the good kind of heady.  Stay tuned.