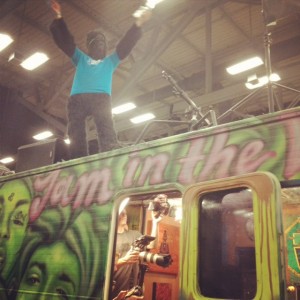 First day of the trip that I woke up not inside of the Jam Van.  Felt a little less cozy sleeping in a tent with Jonny and the Wolf beside me, and the RZA at my feet, but I got some rest, I don’t need much.

Not when there’s Wolf Water to be had for breakfast.  What’s Wolf Water you ask?  It’s a jug full of danger, that’s what Wolf Water is, and I will leave it at that.

As for the task at hand, we were set up, locked, loaded, and ready to record.  The bands that traipsed through the Austin Convention Center and graced our beast with their presence this first day of SXSW were the Parlatones from South Africa, The Rassle from New York, and Jonny Corndawg from Texas.  It was all excellent, it all went off without a hitch (ed. note: excluding the viscous diarrhea that our sickly Gorilla Camera Man came down with).

I’d say our one regret was and is that the Convention Center trade show does not seem to be the hub of excitement and foot-traffic that it was sold to us as, but we’re making our best effort to bring the ruckus and turn it into a scene.  We threw up a huge monitor, turned up our MXL monitors, and we had the place rockin’ with a Gorilla on the roof and a Gorilla under the roof.

This first festival is after-all a learning experience for us, we’ve never been to SXSW, so we didn’t know what type of situation we were getting into.  Now that we do know, we realize that next time around we’re gonna need to be parked outside, because that’s where there’s goings on a going on.

Hitting those streets with the Wolf, Jonny, and the proud Captain of our Street Team, DJ, we explored the mess and mayhem that Austin has to offer this fine week in March.

If you’ve never been here for SXSW, here’s a disclaimer: be prepared to be overwhelmed.  There is just so much going on, so many lines, so many bands whose names you have absolutely never even imagined that you could hear of, so many people with fancier badges than the next, and so many eye-rolls…  It leaves one a little verklempt.

So the first day and night we called a scratch.  We were just figuring things out, guzzling Wolf Water and floating through the crowds.  I managed to find my way into a Hanni El Khatib show, and to the SuperGoodMusic + The Roxy + Bandpage party (ed. note: every party has a million sponsors, very corpo, I’m tryin’ to get corpo, somebody holler at us, we wanna be in the corpo-party scene come next year, we will sell out for heady quicker than you can say heady).

The night ended with The Perfect Hippie, Numbers, and myself eating BBQ on the ground of a parking lot, then attempting to grab a cab ride back to our campsite.  That was maybe the most daunting task of the whole experience, as it is next to impossible to get a cab in this town.  I literally had a can of mace pulled on me by a disgruntled Ethiopian cabby who was upset over the fact that I had the audacity to flag down his vacant cab that had the “in service” sign lit up… The balls on me.

Anyways, I eventually made it (ed. note: mace free) tent side, and as soon as I hit the pillow I was out, SXSW is a workout, I needed a recharge.

Other Highlights:  Jonny gathering crowds of girls and demanding that they follow us on Twitter…  Pretty spectacular stuff…

Track for the Day:  “Thug Waffle” by Flatbush Zombies...  Cause that’s how we do! 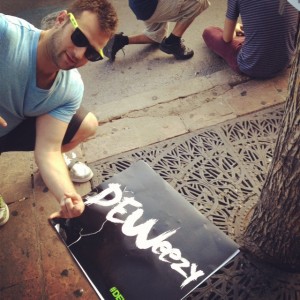 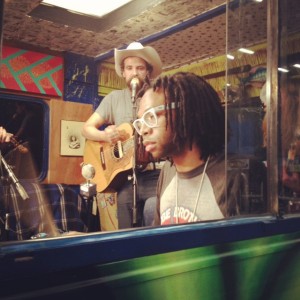 Jonny Corndawg... One of Rolling Stone Magazine's Top 25 Artists to watch at SXSW... 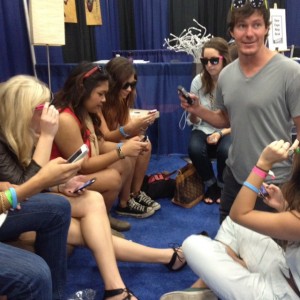 Jonny with our new Tweet-heads... He's also one of Rolling Stone's Top 25 Artists to Watch at SXSW list... 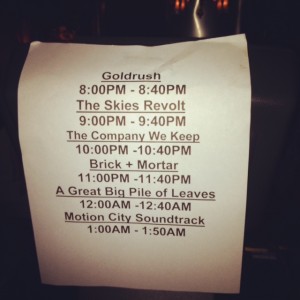 You can expect a lot of sik acts like these at SXSW.... C'mon! A Great Big Pile of Leaves!!!