My dog couldn’t keep his yap shut in the morning, so we got in trouble with our Inn Keep, whom I’ve previously described to you as being named Linda.  Her to the point reprimand for us having snuck the dog in was certainly noted in our online review of her EconoLodge branch.

It was Jonny who was walking the dog when Linda griped “you’re supposed to pay for dogs.”  A dialogue ensued, in which Jonny tried to explain to Linda that the dog had slept inside of the RV with him, not realizing that she had earlier that morning heard the dog barking from within the room, where he’d actually slept.  Jonny was fighting a losing battle, but his plight was overheard by two traveling tequila merchants, whom he hence struck up a conversation with.

By the time I arose for the day I found Jonny a quarter deep into a breakfast of a very smooth Anejo tequila, rightfully named Peligroso.  Thus, the catchphrase “Peligroso Rescate” was born, and repeated, and repeated, many times this day.

We avoided the extra animal lodging fee and made haste for the Ten Freeway.  The drama of the evening prior behind us, we were excited about the prospects of getting some ground between us and Texas.  I for one had grown tired of the dust situation, as well as the two police to every one citizen ratio.  It was time to move on.

Gorilla: “What, the engine?”

An oil leak was discovered, and pieces of the puzzle began to fall into place.  The Ghost Piano, the sixes, the oil, the clunking sound the beast made before she veered to the side of the freeway, the deadening click that her body was giving when her ignition was turned.  The Van was officially broken down beyond our capabilities of repair.  For the first time ever, we needed a tow.

It’s not so bad to wait for a tow truck in the middle of nothing when you’ve got a bottle of Peligroso and a few friends.  The Gorilla, Jonny, and I killed time by hiking out to an old windmill that we saw in the distance.  We took the dog with us too, having to pass him over the rusty barbed-wire fence that we climbed to get at our destination.

When we reached the tattered tower, and climbed it’s rungs, we were amazed by how strong the wind was up at the top.  The metal frame, which from the ground seemed to be perfectly sturdy, shook, creaked, and clanked at the contraption’s apex.  This created the illusion that one was perched far higher than we actually were.  Jonny was the boldest of us, scaling across the tower as if it were a jungle gym, settling himself in the crook of a bent support bar, rocking slightly back and forth in the middle of the machine, very braze, very bold, very stupid, I don’t know which to pick, but it felt like we were in a novel.  I remember orating the stoic phrase “wow, he is stupid…”

From our perch I saw in the distance an oasis of sorts, and determined that this would be our next point of interest.  Dodging cactus both large and small, we navigated our way to what appeared to be an abandoned goat farm.  There were corrals, and a drinking pond, plenty of goat dumpings, but no goats.  Just goat corpses, and a dead bat floating in the pond, the current moving it’s mouth back and forth to give the appearance that it still retained life.  Yet, nothing in this barren wasteland retained life.  It was a roadside graveyard, and our Jam Van seemed to be it’s latest burial.

The tow was quick and painless.  Two Mexican chaps took apart our drivetrain and hooked us up to a massive truck.  The Geologist and Jonny hopped in their cab, the other three of us took the Honda the ninety miles to Fort Stockton.

If you’re staying in a place where dust clouds billow up from the mattress when you press upon it, then the best way to find slumber is to get plastered.

In Fort Stockton you have a choice of three places to do so at.  One was the Good Times Lounge, but they only serve beer and good times, and I’m allergic to beer, so we had two other options.  Styxx, which was closed, and the Atrium Lounge, which was classy as all hell.

There we found an oil man from Louisiana whom we’ll dub with the title of J.  Not like Geologist Jay, but like J. who didn’t want his name on a website because his wife would “cut” him.

To say this man lifted our spirits at a time that they were in need of a boost would be an understatement.  To say that he forced round after round of whiskey upon us and ridiculed us by the name “Vajay Jay Boy” if we declined his offer of spirits, would be spot-on.  Drink, after drink, after drink he bought us, only allowing us to pay for the final round.  Only once did the Bartender, a grizzled man by the name of Bert, lecture Jonny on curbing his tongue when referring to a southerner’s progeny.  Only once did the Geologist try to explain to J. that he wasn’t actually from Lafayette, Louisiana, but rather had lived there for all of six months.  No, no, a shake of my head dissuaded the Geologist from pressing this issue any further, and henceforth for the night his name became “Lafayette.”  Sometimes lying is really the only play you can make.

When all were good and liquored up, and Bert had grown tired of our patronage, we drove J. back to his hotel, the La Quinta, which was light years flossier than the Texan Inn.  We watched him stumble back to his room, and then resigned to the fact that we too would have to stumble back to ours, lay our heads down, and wake up to find out the fate of our baby-girl.

Needless to say, we’d all heard the clunk of engines before, and so as four of us laid down on dust covered beds and one of us (Jonny) laid down in a pile of filthy comforters that my dog had soiled, we weren’t thinking so much of hitting the open road, but of how to prepare for what seemed to be an inevitable funeral.

Other Highlights:  Asking for a restaurant recommendation at the front desk of the Texan Inn seemed like a bad idea at the time, and played out just as it seemed.  K-Bob’s steak house, the finest fare in all of Fort Stockton was as you’d assume, bad going in and bad coming out.

Gorilla and I had a lovely conversation with our barman Bert about his kids’ rodeo-fees, which were the reason that he was working the late shift at the Atrium Lounge.  Apparently even grizzly faced bartenders in Ft. Stockton rock smart phones.  Because he showed us pic after pic of his kids riding big-ass bulls.  Said they started out when they were like 4 years old.  I am thankful my parents put me in a soccer league.

Oh, and I’m not naming names, but two of the people in that bar, and there were only six of us, engaged in an Aryan brotherhood salute at the end of the night.  Neither of the two participants rode back to Cali with us.  I grew up in the Bible Belt and this was still a first for me.  Oooh Texas, you so silly…

Track for the Day:  “Nothing but the Whole Wide World” by Jacob Dylan, from Women and Country… 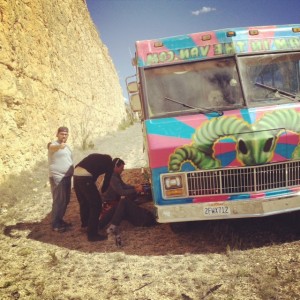 Why does everyone always give the thumbs-up in these pictures? 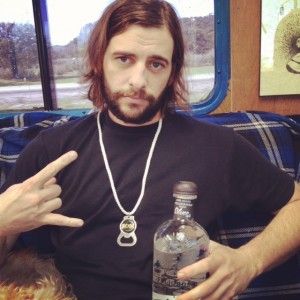 Ooooh, that's right, because we had Peligroso. It's all thumbs-up with Peligroso! 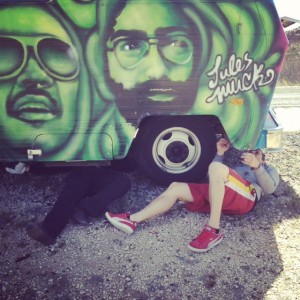 Well, it was all good until the engine started smoking... That was not good, as far as good things go... 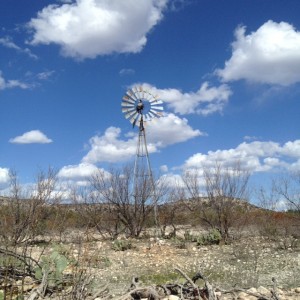 "Who wants to go climb that old windmill?" Things said without thinking too much... 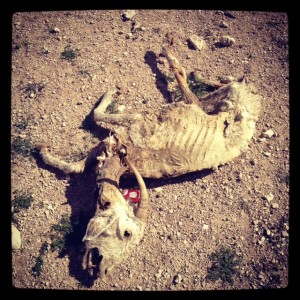 Any future break-downs that don't occur beside abandoned goat farms will be disappointing... 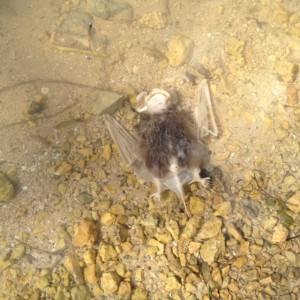 Did the goats kill the bat? Did the bat kill the goats? Was it all the piano's fault? 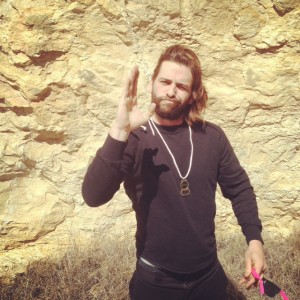 This picture was inspired by Chach and Juicy J. Nuff said... 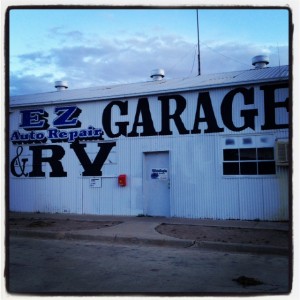 This is where we towed our baby-girl... Ft. Stockton's finest RV Mechanic. 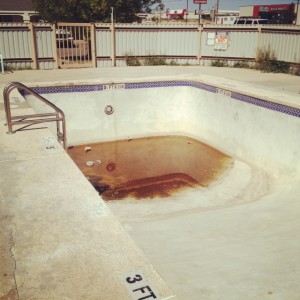 The Spa at the Texan Inn. They had a weight room too, it was an upside down treadmill... 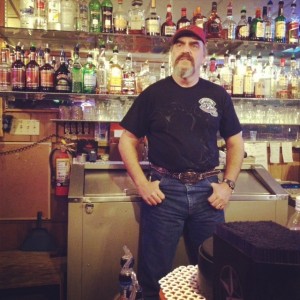 Bert was a mountain of a man... 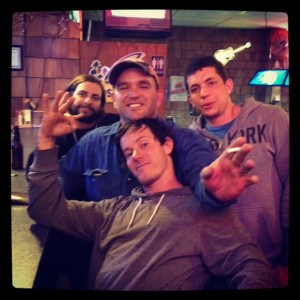 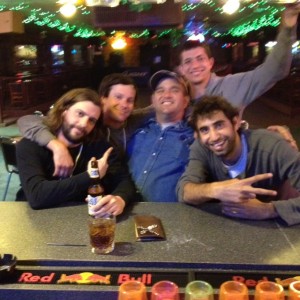