We hit double digits.  Ten days.  Here we lose some important parts of the team.  The PH, our hippie compass, gone, off to the Redwoods to jump between trees and sprinkle vibes that you don’t know are getting sprinkled, until you feel them at those unexpected junctures between your life and headiness.  Philthy, back to the prop-house in Burbank to move giant clocks and street signs so that people can make stories from their imaginations.  Camera Kenzy, back to learn things and slang drinks by the beach in San Diego.  Sound guy Alex back to…  Man I can’t even speculate on what he does with his time in LA.  I’m sure it involves way more Jason Mraz than I have ever encountered in my days (ed. note: gotcha).  The Geologist was also scheduled to split, but his brain circuits were still shooting off Elysium sparks (ed. note: see prior post) and Spoiled Dove Rays, so he had a last minute change of heart, and consequently change of flight.  We’ll call that flight change #1.

Before we lost the crew we slid in just a few final sessions.  These sessions we’ll dub the Sixth Street Sessions.  They were born at a Gary Clark Jr. concert the day before, where I was introduced to Gary’s old friend, Phranchyze, a local Austin rapper who has spread his name via his skills in the art of freestyle lyricism.  He’s caught the ear of Eminem, toured and opened for heavy hitters like Snoop, Big Boi, Scarface, Kid Cudi, Method Man, Dead Prez, and it goes on.

We agreed to meet at the office of Gary Clark Jr.’s management, which also happens to be Phranchyze’s management’s office.  The walls of which are painted with only their two silhouettes.  It was under these paintings that we waited for the Van to be prepped, trading SXSW war stories, his far more star-studded than mine, but just as gritty and filth laden.  He told me he was ready to be the headliner.  That he’d learned a ton on the road, perfected his craft, and was ready to step out from being just a battle rapper.  If we judge this claim strictly off of what we heard in that  parking lot that rainy Sunday afternoon, then I’d have to say I agree.  Tracks were fresh.

We also taped a session with another talented Austin rapper, Perseph One.  As well as singer/song writer Arum Rae.  She’s in the band White Dress, but for this performance it was just her alone with a borrowed guitar that most likely belonged to Gary Clark Jr.  The rain was coming down pretty hard so I had to duck out to a local watering hole to stay dry, but I heard the first bars of the first song and I knew it was a damn nice way to wrap up our shoots in Austin.  I’m looking forward to seeing all of this stuff that we taped come to life.  I hope there’s a good handful of others out there that feel the same.

Other Highlights:  Jonny left the remains of a can of sardines that he ate for breakfast sitting under the sun on the dashboard of the Buddhaphest’s Honda.  The Buddhaphest was not stoked on it.  Also, Jonny and Sound Guy Alex’s fond farewell, they both cried, I cried, we all cried, it was a lot.  Losing the P.H. was more of a low-light, but knowing he was pleased with the work we’d done, that was aight…

Track for the Day: “Heaven and Home” by White Dress off of the album Virginia…  It’s a niiiiice. 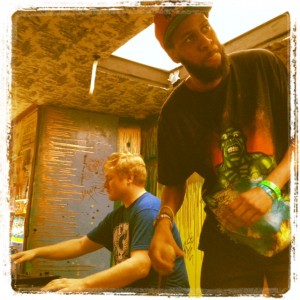 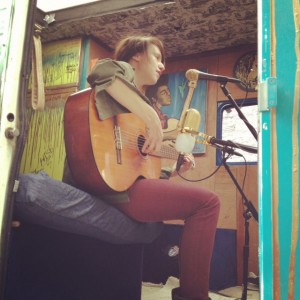 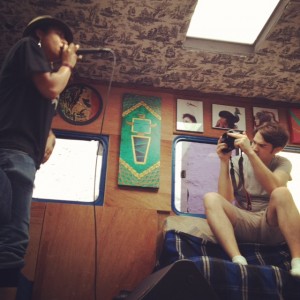 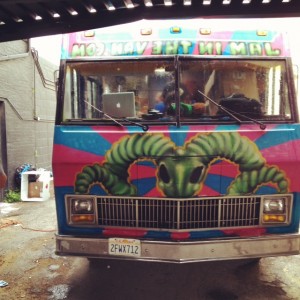 The parking lot off of Sixth Street. Big steer horns guard the gates, it's pretty legit, as far as legit things go... 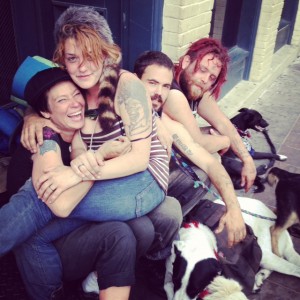 These things asked me for "any type amount of change to take a picture" even though I had no interest in taking a picture. I gave them a dime. They got mad and said this picture was worth way more. I did not like them. Aah Dirty Sixth Street.