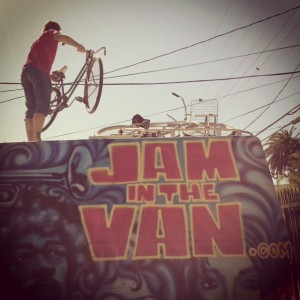 The Hippie loads our bikes up, the last bit of packing before blast-off...

I drove out to LA from North Carolina in the summer of 2005. I drove a ’94 Chevy Corsica with a thirty-five inch non-HD television in my shotgun seat. I wrote notes for a script on a school notebook that I kept in my lap. I might’a crashed. I didn’t. I made it to Venice Beach, the place stuck to me. Nothing ever came of that script that I penned so dangerously on that road-trip, but it was a good feeling, to write something like that.
Seven years have passed. I’m back on the freeways, yet this time I’m typing on a laptop that sits on my lap, as the Perfect Hippie steers us in the direction of Texas. We’re supposed to hit phoenix tonight, camp out at an old friend’s house. Fittingly this compadre from the past whose house we’re crashing at is the first person I ever went on an RV trip with. It was Bonnaroo, 2002, I guess in a sense, it was life-changing.
I think this ride to Texas in our big green and blue vessel could be some type of altering as well.  Five of us set out from Venice around four PM, mark it as having been March 9, in the year 2012.  Mark it that we were aiming for a 12 PM start (quoteth the Perfect Hippie), but we were off by about four hours, and as I typed this to you now, we sat in bumper to bumper traffic somewhere in the sea of sprawl that is the Inland Empire. We had an early bump, but it was minor, and it had nothing to do with the affects of the foul nachos that I threw down my gullet at our first pit stop. No, it was something with the radiator, a loose hose or some crap.

All’s I know is I was trying to get a basketball game to come on my phone in the back of the bus (ed. note: they wold have done it at Woodstock if they could’ve, so scoff your face) when all of a sudden the Hippie starts hollerin’, “something’s on fire! Oh $@$%! Something’s on fire!”  That sentence in usually not proceeded by something cool.
Sure enough, steam was billowing out from the grill, and we ducked through three lanes to the shoulder where a loose cap was tightened, the situation was assessed as ok, and we were back at it.
Night fell with the Hippie cursing at every car in front of him, the Gorilla passed out in the back, our camera girl Kenzy snuggled with my dog the RZA on one of the couches, the Budaphest’s on Honda Civic duty about twenty yards behind on the 10 headed East, with Jerry’s face is slapped on the side.  As for me, I’m back on the freeway writing, and I think that’s a good thing.

Track for the Day: I’m gonna go with “What’s the World Got in Store” by Wilco, off of Being There.  Yeah, it’s lovely, I know.

Highlight of the Day: Truck stop masseuses do exist! Oh man, and they are as gnarly and disgusting as you would imagine, and she was not into me sneaking in her lair when she wasn’t looking and messing with her hand-sanitizer.  No she did not like that. 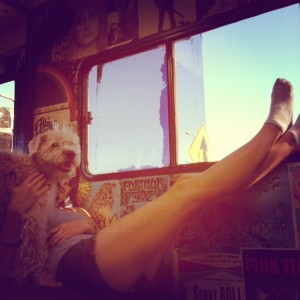 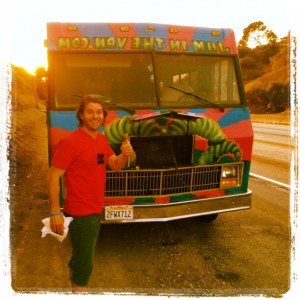 Situation with the radiator assessed as "A-OK" by the Perfect Hippie. That's like AAAAAA, six friggin' A's.