My mom and dad were in town from the East Coast. They told me they were going to come out to the Jam Van shoot to see how we run a tight ship. Apparently my mom was as excited for the shoot as she was for every one of my soccer and basketball games when I was a kid. Because she pulled a no show. No matter, I didn’t have much time to notice. It was a full day, five bands, an interview, a meeting, three other impromptu meetings, and lunch, AND LUNCH! So no worries about my folks ditching me. Dinner was on them either way, and it was their loss.

My dad is a tough cookie. He says he likes something about one out of every five hundred things he eats, sees, hears, or does. He tells me once a week that most of the bands on Jam in the Van suck. Honestly, if you are a band that’s played The Van please don’t take offense, he thinks everything sucks. I take that back, he likes Rixton, a boy band, albeit a good one, but, you get the drift… So I was wondering if he would like any of the bands that played that day.

Although my father cruises around Asheville, NC in his drop-top blasting Young Jeezy, I don’t think he’d have been feeling our first performer, Open Mike Eagle. That’s only because Open Mike Eagle wasn’t Young Jeezy, and in my father’s head, that dude is on a very high pedastal. Open Mike Eagle was a totally different breed of hip hop. He’s a bit more introspective, a bit less talking about flashy things. He had a little synthesizer, a drum machine, and a computer, and we gave him a mic and he went in.  Every time he finished a track he reminded us “that was a rap song,” which is something that Young Jeezy never does. 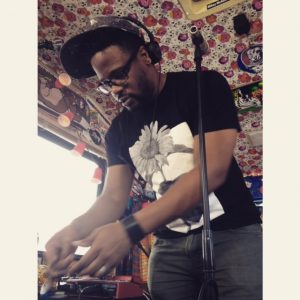 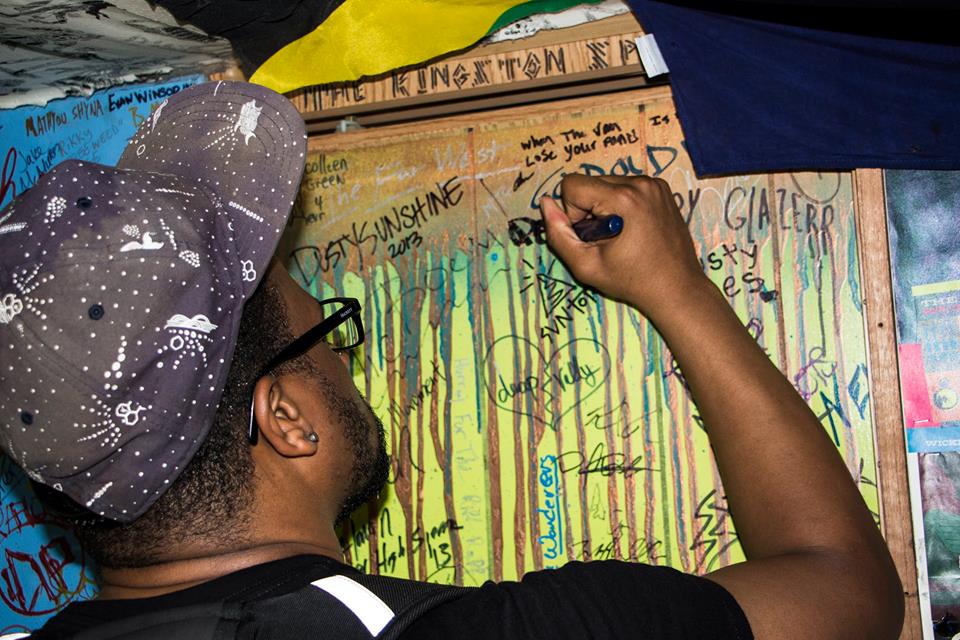 Real estate at a premium…

Following closely behind Open Mike Eagle was the band that I think might have had the best shot at appealing to my father, Freedom Fry.  Their songs were extremely catchy, which is why I think pops might have dug it.  He’s a sucker for that type of song. Specifically the type that he can remember one line from and sing that one line over and over again until my mother screams at him to “shut-up before you drive me nuts!”  Anyways, these guys and gal, were really sweet, and their songs were equally lovely.  I was posted on the couch humming along, and would have been completely content there for the duration of the set, but there were two gentlemen in attendance that weren’t going to allow that to happen. 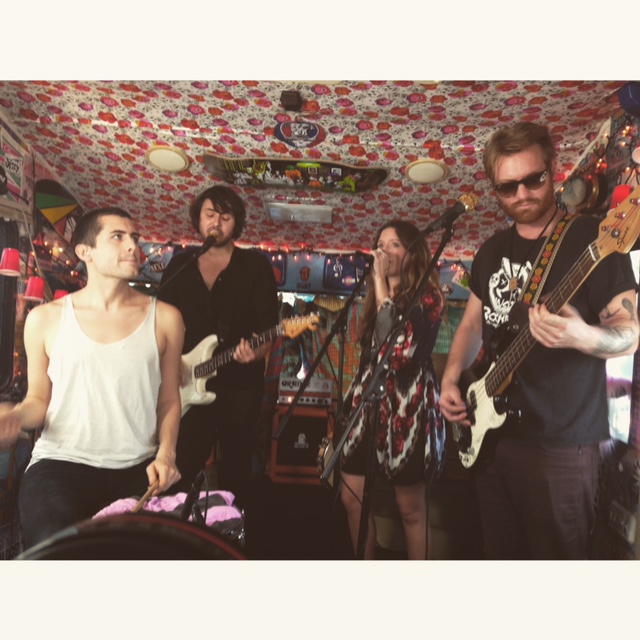 Freedom Fry played music and we had tacos for lunch. 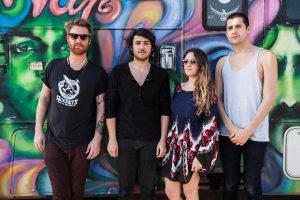 That sounded bad, but it really wasn’t.  They were actually there to interview myself and Dave Bell.  We’d been in communication with them for a few weeks trying to set up a time and place to meet up, and we’d settled on the Swinghouse Studio shoot.  The interview was for a podcast called A Pint of Cacophony.  We pulled up a few lawn chairs and they asked us some questions about where we started and where we’ve gone, and we did a couple radio plugs for them, and that was that.  Those things are always fun because it’s like, damn, someone wants to interview us, it must mean we did something cool, right?  Where you at now Mom? Where you at now?! 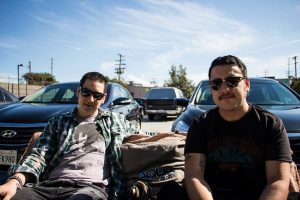 The interview took just a few minutes, and concluded just in time for us to catch the entirety of the next set, which featured a band that we were already very familiar with, The Tumbleweed Wanderers.  We’d met these boys from the bay a while back through our friends at Lagunitas and we’ve kept an eye on them ever since.  On this occasion they were down in our neck of the woods to play a Jam in the Van Presents show that we were hosting later that night, so we figured why not squeeze them in for another Jam Van Session?

Tumbleweed Wanderers performed three songs for us, but they were not thrilled with their performance on one of the tracks, so it will forever be lost in our hidden files.  It’s one of those instances where to the untrained ear, the song sounded perfect, but to the musicians performing it there was something off that they just couldn’t stand for.  It’s a bummer, because it was maybe my favorite song of the three that they played, and if I was a betting man I’d have guessed that my father would have felt the same way.  Regardless, we didn’t give them any time to dwell on their mistakes.  Instead, we ushered them over to where we’d set up a row of chairs beside The Van in an area that we would be dubbing as Cuz’s Corner for the day.  There they had the prestigious honor of being intreviewed by the one and only Spud.  He took their band name and ran with it, coming up with at least three puns to work into his schtick.  I don’t know if the Tumbleweed Wanderers were high for the interview or not, but Spud has a knack for making all of his guests come off looking like they were. 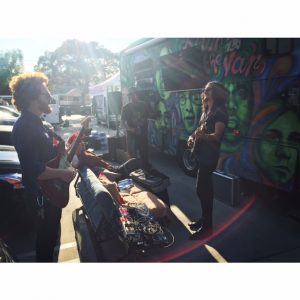 Most beautiful thing I’ve ever seen… in the parking lot of Swinghouse Studios. 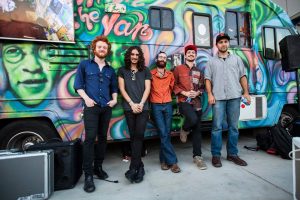 Can’t get the hippies to stop hanging around our van. 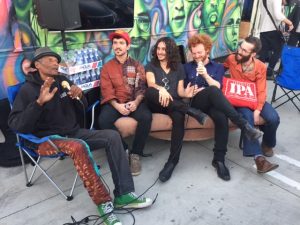 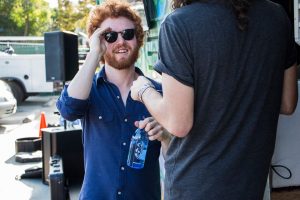 Not in the military. 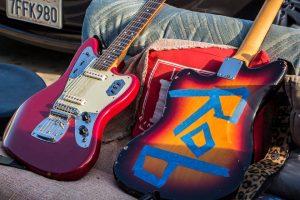 My dad probably wouldn’t have dug the Tumbleweed Wanderers too much.  He’d classify it as “hippie music,” which it very well might be, but what does my dad know?  Anyways, so called hippie music is what got me into music to begin with, so there will always be a soft spot in my heart for that type of rock and roll.

Now, for those of you who don’t know, it costs a considerable amount of money to keep the Jam Van on the road and recording music.  So we’ve got to always be on the lookout for new brand partners to come on board and help feed the beast.  While at Swinghouse we had set up to take a meeting with a potential new sponsor’s marketing team.  They ended up bringing along another brand to show us, and so Dave and myself snuck off behind The Van with these corporate types and we talked dollars and sense for a few minutes.  Unfortunately there was no beer allowed in the lot for the day’s shoot, so our usual strategy of getting the company’s reps wasted and tricking them into signing the deal was a no go.  We had to go about it the old fashioned way and actually talk numbers and strategy.  That being said, it went pretty well.  Obviously not super well, or else I’d be less cryptic about who the brand was and I’d be promoting the hell out of them right now, but all in good time.

As luck would have it, our colorful set up was noticed by not one but two other companies that were located in the area and were aware of what the Jam Van is and what it does.  So we had two more impromptu pitch meetings, which is always a good thing.  We’ve actually made some money in the past from people coming up to us at shoots and asking how they can get their brand involved, so you never know what’s going to come out of a conversation. 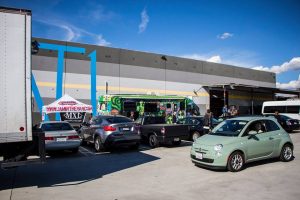 In between all of these meetings and bands I had to go and find some food to feed the crew with.  So I had intern Jack (who’s no longer an intern but will always be an intern because his shirt says Intern 4 Life) look up the nearest Mexican restaurant and place an order for a whole mess of tacos and a couple of plates of nachos.  Spud then strolled over to what turned out to actually be an Ecuadorian restaurant and picked up the food.  When he returned he was without the nachos, which was what I was most looking forward to.  So he and I walked back to the restaurant and asked them to make us our nachos.  It took a few minutes, but the waiter returned with a bag of what was clearly just tortilla chips and said “two orders of nachos.”  So on that day we learned that in Ecuador nachos means tortilla chips without cheese.

We returned a little bit bummed but with our spirits unbroken to find Jared James Nichols tuning up his ax inside the rig.  He and his two Swedish bandmates went into The Van completely dry.  One extremely intense shred sesh later they exited sopping wet.  I don’t know if hair bands are still a thing, but Jared and his crew would certainly be one if this were the ’80s.  They had some manes.  They also knew how to just rock the fuck out, and that is what they did.  I won’t even pretend like my dad might have liked this display of badassery, because he is a straight up hater and would certainly not understand why this shit just fucking rocked. 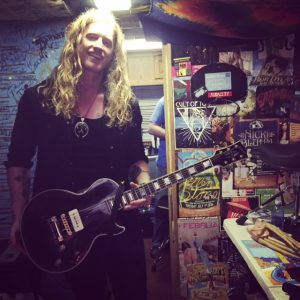 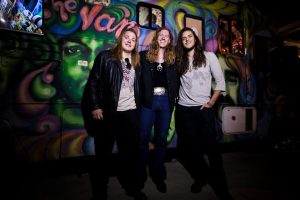 The last band of the day, Young Creatures, showed up a little bit early and hung out around The Van before their set listening to Jared James Nichols shred.  The Young Creatures all had beaming smiles accross their faces, they were super stoked to be where they were.  That’s because they’d been trying for at least two years (maybe longer) to get inside of The Van.  They first contacted us via Instagram asking in the comments section if they could Jam in the Van.  That’s a big no no.  You don’t ask in the comments section of Instagram if you can Jam in the Van, that’s not professional, and we are professionals.  So they got the hint and they adjusted their attempts and followed proper protocal (emailed music to bands@jaminthevan.com).  However, it took at least three to four submissions for us to finally decide that the young bucks were ready to take on The Jam Van.  So it was understandable that they were a bit geeked to be there that day.  It was somewhat of a dream come true for them. 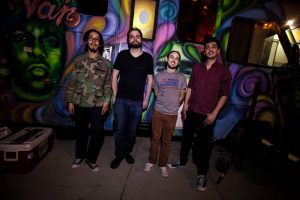 I feel like the photo would have been better if we told the smaller guy to lay in front.

Unfortunately, I had to split a little bit early to meet my parents for dinner.  So I didn’t get to catch the Young Creatures’ set live.  I saw it later in video form, and while I think it’s the best effort I’ve come accross from this band, I don’t think my dad would have dug it, but again, what the hell does he know?!  So the moral of the story, while dads may be awesome, and full of good advice, they most likely don’t know shit when it comes to rock and roll. 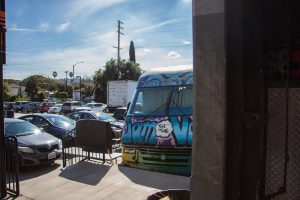 Pulled up on em. 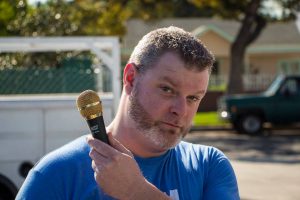 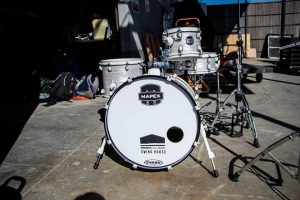 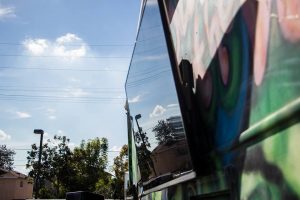 Toshibas even reflect in 4K. 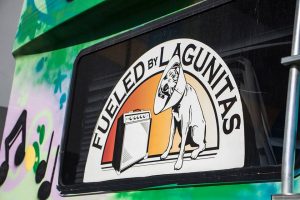 You don’t have to frack to get it either. 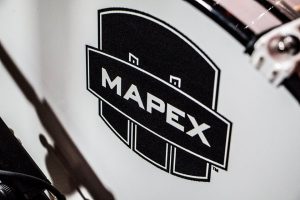 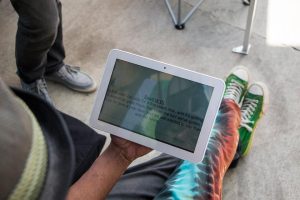 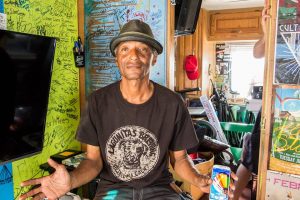 Looks like a meditating position, but he was no doubt yellin’ something. 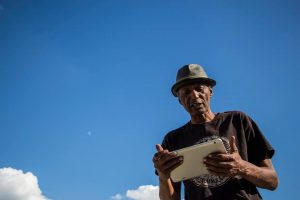 Spud using his Toshiba tablet to do some Batman type shit. 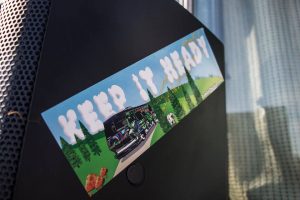 This is a custom model QSC speaker. 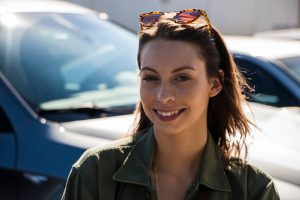 Intern, stoked about being the intern.