Playing with Bands and Drones at The House of Blues

The list of venues in Los Angeles that we haven’t filmed at is getting shorter and shorter (if you’re on that list, get at us). Check The House of Blues off, because we knocked that one out in fine form on a sunny Saturday afternoon in February (suck it East Coast)(sorry mom).

The morning began with Spud, our very “professional” driver telling me that you turn left onto Sunset Blvd. off of La Cienega to get to The House of Blues. I withstained from betting him, because I wasn’t certain, but as it turned out, I should have bet him, because we should have turned right. Luckily our intern wasn’t alarmed by Spud hollering at some woman blocking his return route and we made it to the venue only half an hour behind schedule. 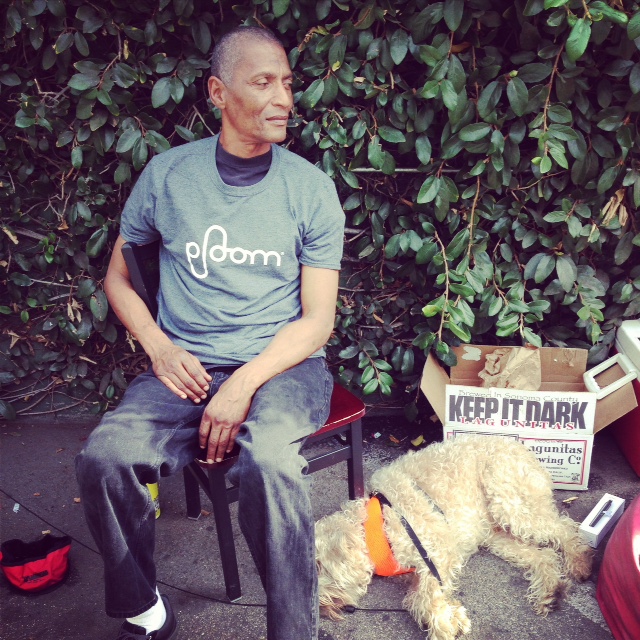 Luckily, as has been noted on here before, we show up fairly early to shoots, it falls under our Spud Clause. So we had plenty of time to set-up, hangout, and play with our new drone. Yes, we work for the NSA now. Yes, I can spy on my douchey neighbor who likes to sue everyone in the neighborhood. No, I have not yet. Yes, I did crash the shit out of the drone several times, the worst probably occurring moments before our first act of the day, The Devil Makes Three arrived.

I put that thing into a tree, narrowly avoided the Jam Van, put it into another tree, and then crashed it about forty feet to the ground where a bystander picked it up and told me “it hit pretty hard.” Luckily only one of its prop-lights was busted and it was able to attempt several other footage gathering missions throughout the day. The intern knows how to fly it, so he flew it, and he is under strict instructions to not allow me to fly it again. I foresee a new drone in our future. 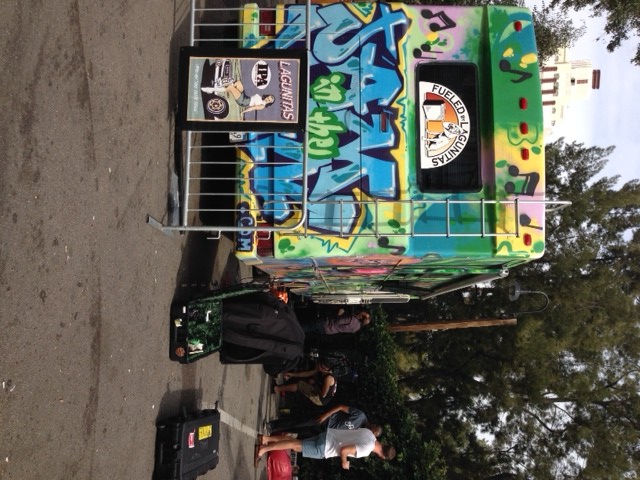 Parking spot, right below the tree I hit.

As for the music, it was a knee slapping kind of day, with a lot of bluegrass, banjos and fiddles gallore. As mentioned, The Devil Makes Three started us off seamlessly. We were able to answer their question of “will a full upright bass fit in there.” The reply, with ease… 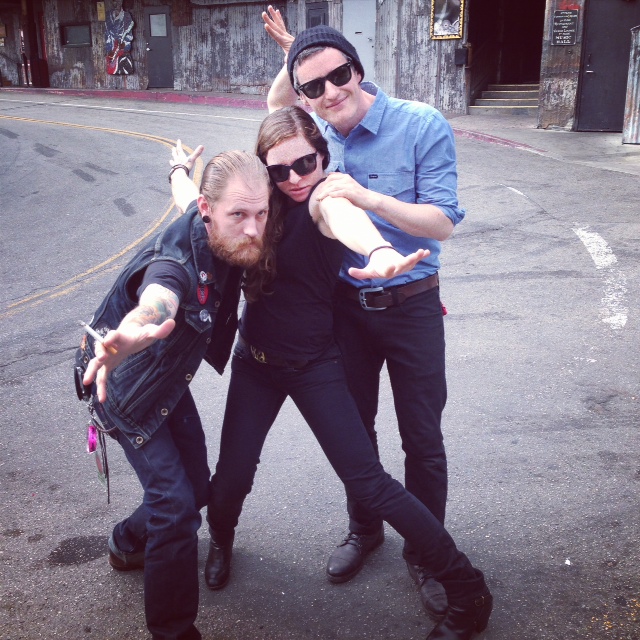 The Devil Makes 3 is made up of 3 people, I am not sure which one is the devil, but probably the woman.

Spud sat down with the band in Cuz’s Corner and informed the world that “if you don’t want to go to church, see The Devil Makes Three.” We can’t verify if the church has approved this message or not, but Spud used to be a sexton so I assume he’s speaking from a place of knowledge, as always. 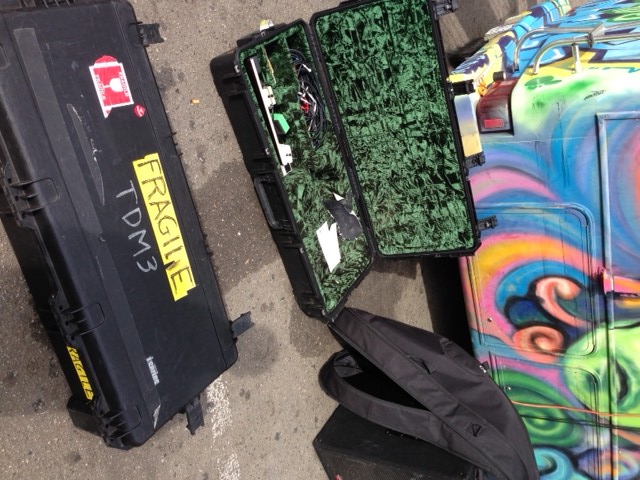 The second group of the day was Jess Williamson and her band of minstrels from Austin, TX. They did two songs as a group and then Jess stepped in with just herself and a banjo to play a song called “Seventh Song,” which seemed pretty damn heartfelt. Take note of the lyric “but here I am at twenty-five and I can’t sign a lease, mostly I survive off people being nice to me.” That’s good stuff, best of luck in your quest Jess, you were just on Jam in the Van, so I’m sure you’ll be famous and live in a big house soon.

Jess and her crew enjoyed the benefits of one of our newest sponsors, the Pax by Ploom. They may have enjoyed it a bit too much as they forgot their keyboard when they left. No worries, Spud stuck around and got it to them so they could play their show in Echo Park later that night. 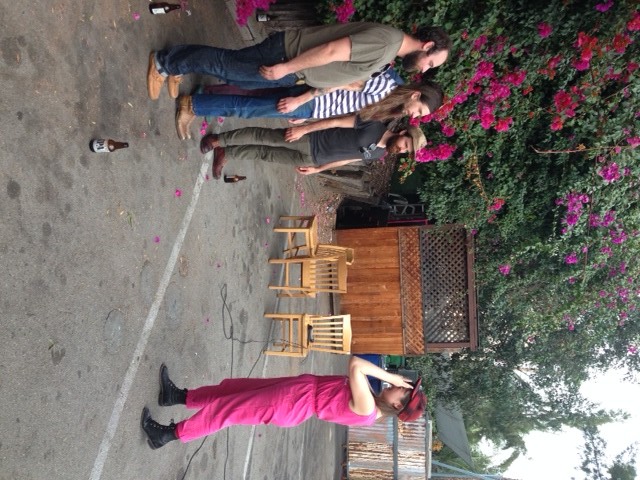 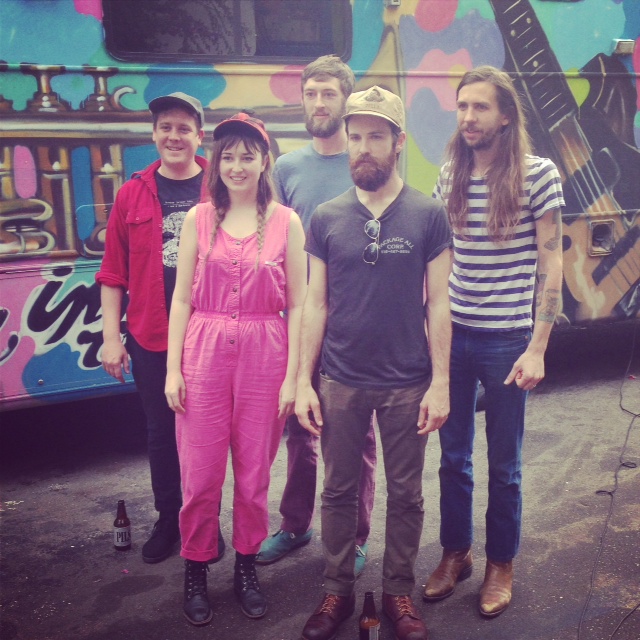 Hey Jess Williamson, where can we get a onezy like that?

Our final act of the day was a group whom our friend Laura at Lagunitas Brewing Co. has been bugging us (in the sweetest of ways) to film ever since we started working with Lagunitas. So since we love making our Petaluma beer buddies smile we met up with this band of musical brothers, two of whom are biological brothers, and we jammed in a van. So to Laura, thank you for turning us on to The Brothers Comatose. They play some kick-ass bluegrass and were all around nice guys. They shot an episode of Cuz’s Corner during which our fluffy buddy RZA the Dog decided to walk into the interview and steal some spotlight, and Spud decided that he wanted to be a brother, so he joined in during their group photo. Last we saw of him he was learning to play the washboard in preparation for the next Brothers Comatose tour. 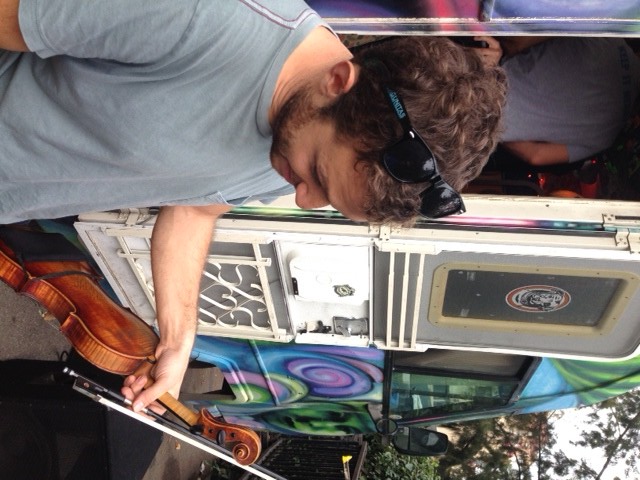 As you can tell by their shades Brothers Comatose was already familiar with our sponsor. 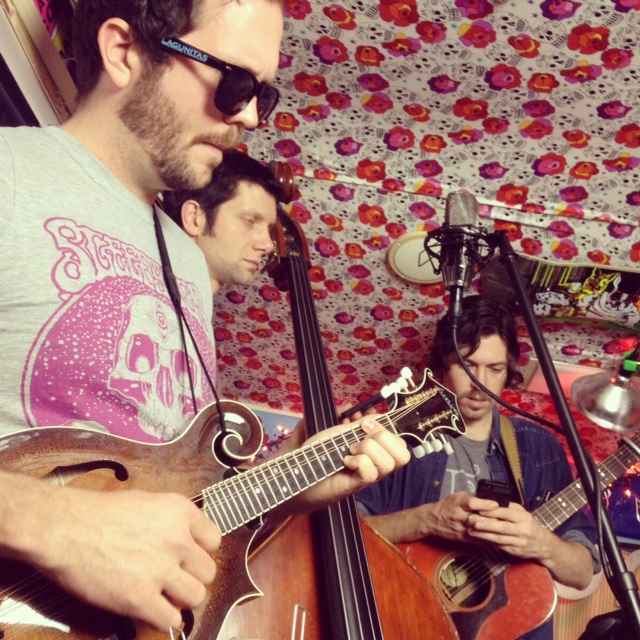 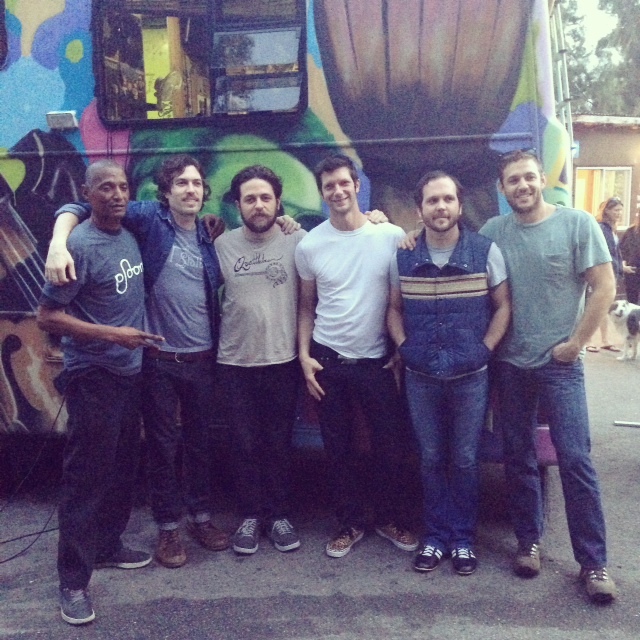 They left with a new brother. 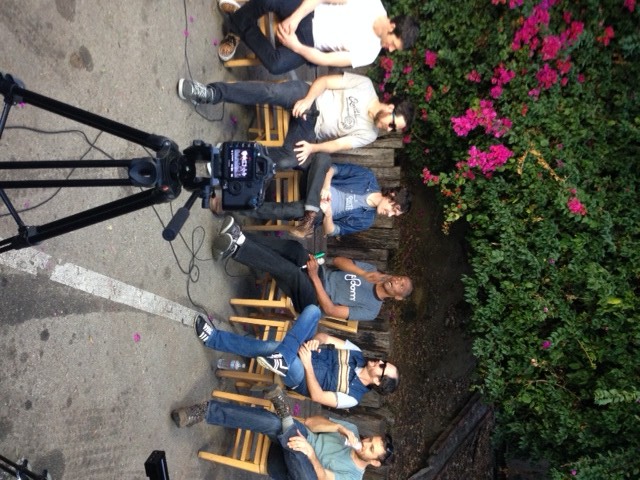 Once you sit in the corner you are forever changed.

That my phriends, is a wrap, until our next adventure. In short, the drone lives on unless the intern screws up and lets me fly it again. Oh, wait, my buddy wants to go to the park now to fly it. Th-th-th-that’s all folks… 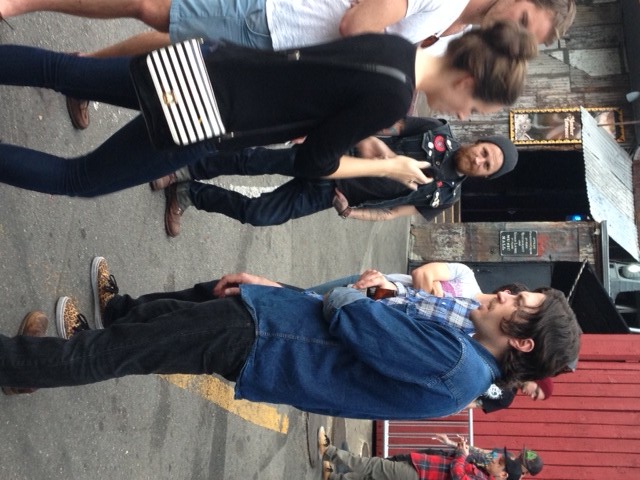 Brothers Comatose, meet the Pax by Ploom. They seemed to like it. 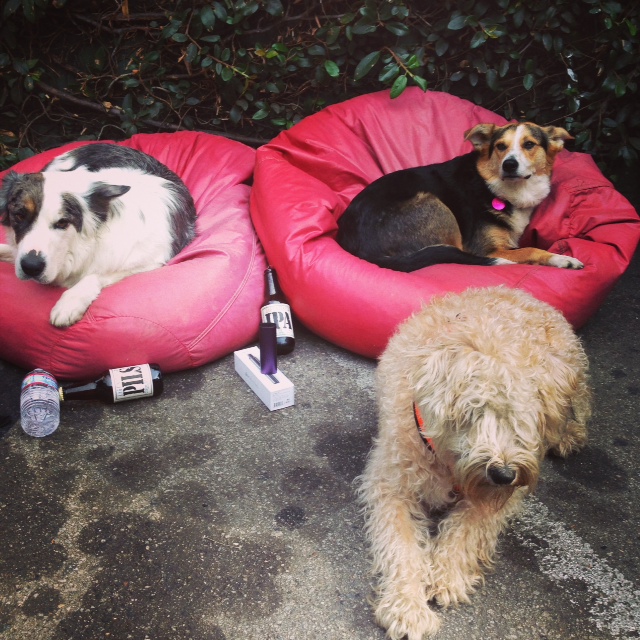 RZA and his crew. 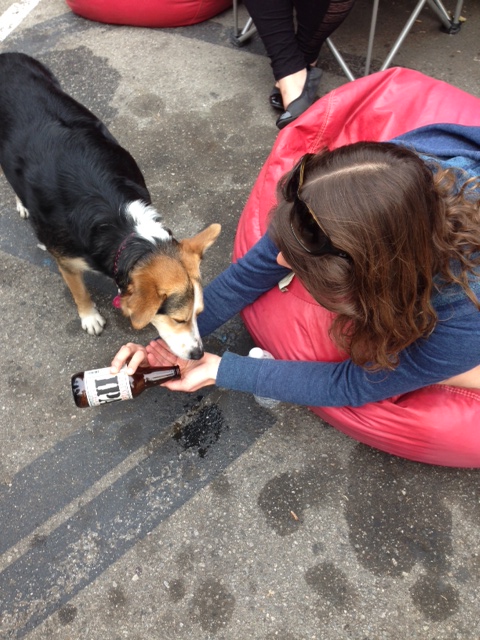 One of the crew is a booze hound… Lagunitas take note. 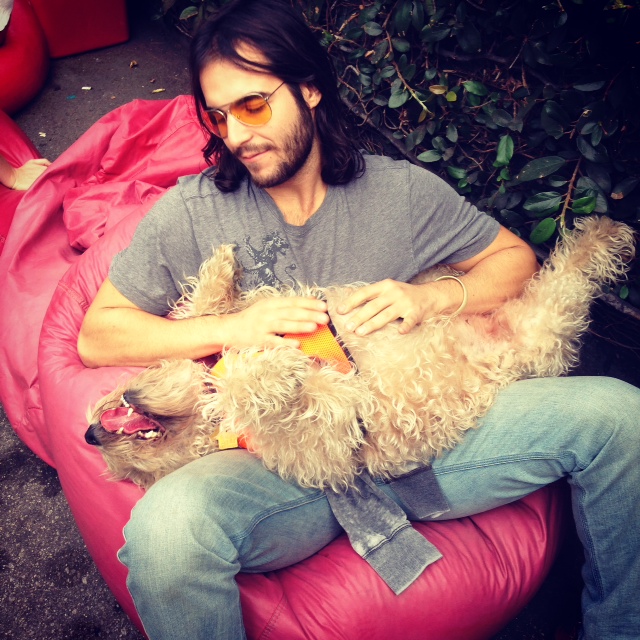 RZA getting some quality time with his Uncle Phil. 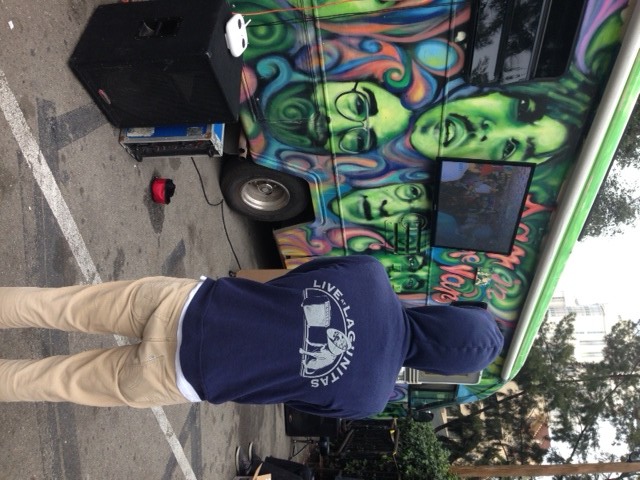