This will likely be the most coherent part of my recant, as it’s the most recent.

We again spent a couple of months filming in the city of smoggy dreams. I’m pretty sure it was during this time span that we filmed MOE at our headquarters. We had a contest for some MOE-heads to sit in The Van during their session. That lucky MOE-head brought us gluten free cookies. I dug that. Hey, if a band you listened to a lot in your college years wants to come to your office and there are cookies involved, it’s a good day. We try to have as many days like that around here as possible.

Then, eventually, an opportunity arises, and our eyes and ears perk up and we get that itch and we’ve got to get out of town. You see, Los Angeles has a lot of musicians, every type. There’s dudes and gals with cowboy hats singing sad songs, kids cloaked in torn black rat gear whaling about how they’re bummed with their parents, there’s a whole lot of dudes and chicks with a computer, a beat machine and some words… and then there’s lots more types of musicians that I’m not going to list. Just know there are a lot. Not all of them, and honestly, probably not most of them, start out here. They come from somewhere else, and that reasons to say that there are a whole bunch more of them roaming around the rest of this country. So we like to get out there and find it before it finds us sometimes.

For this next excursion we hitched our wagon to the National Parks Services and planned a cross-country ride. It would take us from the California coast to the Blue Ridge Mountains and back through the heart of America. 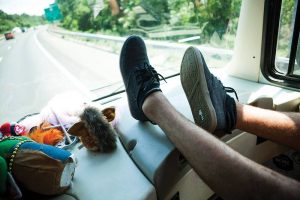 Kicking back and hitting the road.

Round one was a cheat round because we didn’t really have to go anywhere. Ventura is a mere hour away, so we simply made a day of it. Ziggy Marley came to hang early and about 150 kids from a local youth organization came to jive with him. We again partnered with Dole Foods. For this one we filmed a chef cooking with Dole products and had some musicians sit in on the demonstration. It was not our finest work in content production. I think we were closer to the mark when we sent musicians up in a hot air balloon at Coachella and had them tell us their favorite festival story. That didn’t seem as forced as this first go around at a cooking/music show. You can’t however, always, have a hot air balloon on call. 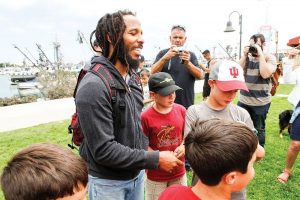 Ziggy and a few of his not so big fans 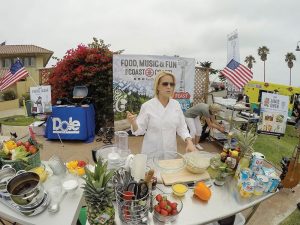 Cooking with Dole at Feast to the Beat

Ventura for the most part went off without many hitches. Sam Outlaw was a bit late and missed his recording slot and then he had to roll to a gig, so I called up Elijah Ocean and he drove his Mercury out to meet us and fill the slot left vacant. Braeves were pretty good, and Layne wore an astonishing amount of black given how hot it was outside, and The Brevet were a good time. That’s my in-depth music recount. 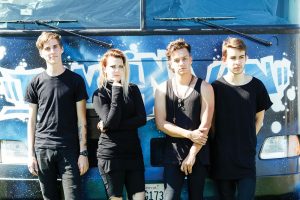 At one point during the event the chef was making a smoothie in front of the large group of kids and let them know that it was never too early to add vodka to your smoothies… that was a bit off. Everyone slept in Los Angeles that evening, nothing more to report here. We gave it a couple weeks to simmer and then packed the rig up to hit Route 66 again.

Three of us rode out in the Jam Van, Ethan at the wheel and Morty Yelping what restaurants we would stop at (only 1 fast-food spot per trip). First city up was Flagstaff. We like Flagstaff. The town is quaint, the people are friendly, our favorite haunted hotel is there and there’s a crystal store (quartz not meth) where all the employees are attractive girls. Morty really liked that store, it hit a lot of his requirements for being a good store, or place in general. We bought some crystals to bless The Van, so consider it and us blessed.

After Flagstaff came Albuquerque, where we stopped for a plate of New Mexico slop, “you’ve got to try the green chile” (you actually don’t). After Ethan’s daily feeding (put a pin in this spot where I say that he ate almost all of his slop), we shot over to Walter White’s House. Morty read on Yelp that if the old man owner is at the house he’s very friendly, if you get his wife she’s not. She was not. Our picture was more like a picture 100 yds away from the Walter White House rather than one at it. 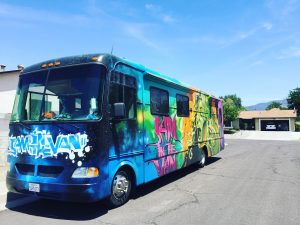 Pulling in to Walter White’s house 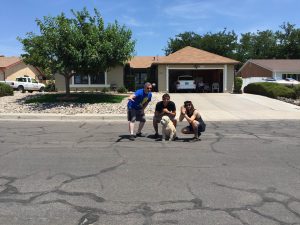 Keeping a good distance from the wife…

That evening we ate at some kind of roadhouse where there was a Dutch playing guitar and singing for dining room entertainment.  He kept asking the crowd for requests but every time we gave him a request he said he was Dutch and didn’t know that song.  So he played a lot of Dutch stuff.  Morty took some photos with him.  My steak was sub-par. 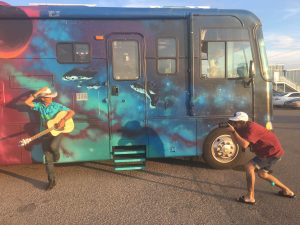 From there we shot out to one of my least favorite towns, Amarillo. This is a town that manages to consistently keep all of its dusty hotels and motels at full capacity while boasting little more than a slathering of bad chain restaurants, strip clubs, and a place that will serve you a 72oz. steak on display atop a platform in the middle of the gigantic dining room. Given our options, we went with the steak place. They sent a complimentary limo for us with bullhorns on the front. They must have known that we were looking to spend the big bucks and get Ethan fucked up on protein. 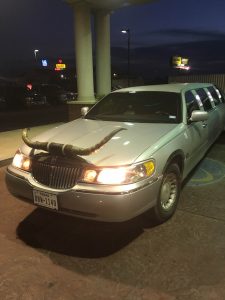 At first the waiter was hesitant and told us that the kitchen was not making any more 72 oz steaks that evening due to the late hour’s proximity to closing time. Fret not, I let them know who we were and how many YouTube subscribers we had and that my extremely professional cinematographer, Morty, was going to be filming it all. They immediately slapped one of those things on the grill.

Roughly thirty minutes later Ethan in all his semi-happy, semi-grumpy glory was on full display in front of the entire room of locals and “close to locals.” You can now take the pin out of the spot which you no doubt earlier bookmarked. As this is the part where I tell you that sadly Ethan only consumed 36 oz. of steak and had to run to the bathroom with thirty minutes left on the clock so as to not shit his pants. So much for priming the engine. He was halfway there in half the time, and I paid the bill for the full price of all that meat. I handed Ethan the loser shirt that he “won” after telling the crowd of restless Trump supporters that they couldn’t boo him because he served our country. They got it. 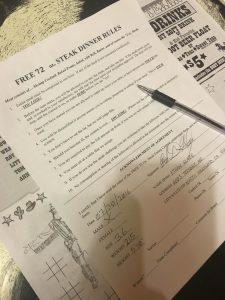 We bought some wonderful souvenirs, like an old timey hologram picture of a dude with an ax in his head and headed back to our lovely room at the Comfort Suites. Ethan and I hit the hay pretty quick, but Morty boy wanted to see what that wild Amarillo night held for him. I can summarize in short that it held a bar with several women and men of varying age and varying amounts of out-of-wedlock children, and a parking lot game of softball that involved new parking lot friends and lasted until seven AM. I wasn’t involved in either affair so I can’t provide intricate details for you and I assume neither could those who were there. I just know I saw Morty stumble in at around sunrise and he seemed to have had the best of times, so I don’t question it.

The next day found us in Oklahoma City, and I’ve got to say, if you absolutely have to live in the middle of nowhere, choosing to do so near Oklahoma City isn’t quite as terrible as I assumed it might be. Now by no means was the town jumping, but I think we all had a solid first OKC experience. Will I go back? Not if I don’t have to. Will I reminisce on it fondly? Solid chance.

It was no doubt a good omen that we bumped into American Aquarium outside of our hotel. Ethan rapped with them and they led us to an open mic that they turned out not to be at, maybe we were late, but regardless, we instead got to hear Morty’s stunning rendition of a song he wrote about how his girl had a baby but how it was a black baby (Morty is not black), performed acoustic on a borrowed guitar. Morty’s mic was soon after “closed” by the older gentleman MC’ing the night when it became apparent that he’d forgotten a good percentage of his lyrics.

That was enough OKC for me, but I again tip my hat to my compadres. Ethan was able to maintain about an hour playing darts or checkers with some construction workers staying at the hotel who had work in the morning. He then found his way upstairs to drunkenly wake me up to beat him at video games. For some reason I woke up and did it. Morty, again, was out well past his bedtime and crawled in just as the sun was coming up recanting tails of what sounded like far below average chess playing and amazing conversation that I’m not sad I missed, but again, he seemed entirely content.

Ethan, having lost to me humbly in Madden at 3:30 AM begrudgingly drove us through Arkansas the next day where he tried to educate us on geography, claiming that the state where we were stopping to have pulled pork BBQ and hush puppies and whose state school mascot is a flaming red warthog, was not in fact a Southern state, but in fact Mid-Western. Every single person in the restaurant chimed in in-unison to correct him when I asked for clarification on the geography. The people spoke. If you’re eating hush puppies you’re either in the south or at a cheap knock-off. 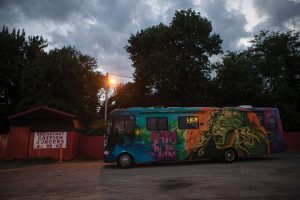 Overall the BBQ was pedestrian and we should have pushed into Tennessee before stopping for any pulled pork, but the satisfaction I got from a room full of hillbillies telling Ethan he was wrong was unquantifiable. We got to Memphis late that night. I may or may not have reserved a room for a date that was a month later in the calendar than the night we needed. Eric may or may not have cleaned that mess up for me the next day.

Memphis was overall not very exciting this go around. I had a gluten-free pancake, and it was too hot to eat outside. Back on the bus, AC cranked up, nothing to see here. From there we rolled into our second official National Parks destination, Asheville, NC, my hometown…(to be continued)

Don’t forget to check out the entire playlist of sessions from our cross-country road trip!