When it’s sitting in West Los Angeles’ in its dock and recording sessions at our headquarters it’s fun, but it’s not the same as when it’s out there on the open road. Yet, we always have to have lulls in the schedule, some time to reflect and detox from the road. Luckily bands like MOE come by our office and film with us while we’re sitting stagnant and it kind of doesn’t feel too stagnant at all.

I’m not sure if that happened before or after our next big event, let’s just say when we were in LA shit happened on the weekdays, and it was usually a pretty solid time for those involved. I’ll have Jack put some pictures down below so you get an idea of who came, what was seen, and what was heard.

Now let’s flash forward to April, when they have hipster Bonnaroo, in the Coachella Valley for 2 weeks, and as a bonus, they’ve got Orange County Bonnaroo (Stagecoach), the weekend after, so we figured it would be a great place to film a lot of bands and have a good time. It was, and we did, but it wasn’t as easy as the recipe on the box.

For starters, Coachella is set up like a Donald Trump sponsored immigration center. Even if you’re not going to the festival you’re getting “super-vetted.” The drive through town is littered with police and barricades. No four-way stop sign intersection is safe. I’d venture to guess that about 60% of the roads are blocked off. If you do go inside the actual festival, which I did for my first time this year, you go through even more immigration check points, where they essentially check the same things at each one about 5 times before you’re allowed to enter the center of the event. Apparently the strategy worked, zero terrorism happened. Zero.

I went in for LCD Soundsystem, and one observation I took from the definitely not capacity crowd at that particular show was that kids have shitty imaginations these days. I say loosely, that I am not in my prime for this festival. The median age is around 19-22, I’m a bit not that anymore, and can only be that in short spurts before I need to sit down. So most of the kids in attendance were over at some kind of Skrillex and friends of Skrillex gig instead of at LCD. Which to me wasn’t a bummer, because I got to walk up close without getting too much beer splashed on me. However, in the overall, as they say, I think it’s probably a bummer. 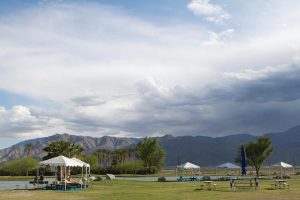 Our production wasn’t actually inside of Coachella, but rather located at an off-sight party called Base Camp. Our sponsor for all three weekends was another corporate juggernaut, again in the pre-packaged food world, Dole. They handed out frozen chocolate covered bananas and smoothies each weekend. Not necessarily anything wrong with that. We filmed a segment called “Never a Dole Moment” (damn right I came up with the title) where we sent a couple of musicians up in a hot air balloon that happened to be on site and asked them what their wildest festival stories were. The balloon was a tethered situation that only elevated about 100 ft. and as a result required the absolute absence of any breeze in order to operate. This is a tough prerequisite. So we got two dudes and Jack up in the balloon (that’s got bad porn title written all over it). Then we faked another where the balloon just stayed on the ground. It was a pretty good fake. I think at least here we managed to coexist with the corporate extension that was necessary for what we’re attempting to do. In fact in comparison to SXSW this was some fairly laissez faire consumer marketing. Also, no rat meat served here either.

At this event there was a pool, and a lake, and for three consecutive weekends, somewhere in the vicinity of a couple hundred people camped out there rather than stay on the festival grounds. So by day, for each of those three weekends, we parked by the pool and watched an eclectic mix of musicians funnel through our four walls. 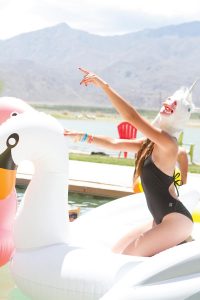 Save a horse, ride a…swan.

Each of the three weeks, as Thursday would approach in Los Angeles, I’d begin to pack a bag, saddle up the dog, and pick up Morty, and the two of us would head out to the desert. Each week got progressively less and less like Fear and Loathing in Las Vegas. By week three, not only were we not super interested in ether (kidding) (maybe), but we were in loathe of the task ahead of us as if it weren’t just going to a pool to hang out with some bands. That town during a festival can wear on you something good. Just the number of police within such a small radius is unsettling. Add to it all of the road blocks and inebriated pedestrians, and it is not the ideal vacation destination for this guy… that being said, we started strong on week 1. Like Bonnaroo circa 2007 strong. For those of you who didn’t camp with us at Bonnaroo 2007 (most), that means very strong.

We stayed at a house that was about a fifteen-minute drive from the event location. We made that drive maybe twenty to twenty five times over the course of the three weeks, I was pulled over once, I think that’s pretty good numbers. I was stone cold sober (PRAISE TO RADD), and so I took my stop sign coasting ticket with a smile. Any interaction with an officer that only ends in a ticket is a great interaction in my book. So from then on I just stopped at stop signs (a trait Morty would no doubt advise me against, metaphorically speaking).

I did in fact make this driving mistake during week one where we were certainly stopping at less metaphorical stop signs with far more frequency than in the weeks to follow. So with that in mind, let’s just say that everyone was on their best behavior and nobody but Morty wanted to ride in my car the rest of the trip.

No interns were bloodied on any of these excursions (to my knowledge) but they certainly did get their fill of lying around on beanbags in a sunny green field. Our interns are really good at that task. They did other stuff too, but it was less noticeable, we love them all, they get my lunch if I say to. 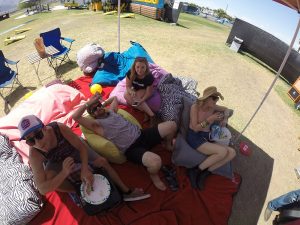 My buddy from college whom I hadn’t seen since we’d last hung out in Phoenix during the original Jam Van’s first and only ride towards Texas came out to visit us during weekend 2. This time around he brought a doctor with him, which in his line of work and recreation is always a good idea. Even if it’s a bad one.

Upon his arrival, he displayed the enthusiasm that one has upon first getting to a music festival or an all weekend party. It’s an unbridled blur. The way in which individuals can shift from work to party is uncanny. I tip my hat to the homie (and his doctor) for pushing for gold in everything he does. This particular friend once wanted to get the NCAA record for most single’s tennis losses, and he explained it to me in the best sense anyone’s ever made, “It’s actually pretty hard to do when you think about it. Because you’ve got to suck enough to lose every time, but not enough to get dropped from the top six players.” The top six being the only ones that play singles matches in competitive team tennis. There’s a life lesson in that. So again, I tip my hat, and I am confident that he is a fantastic lawyer and recommend his services at the highest commendation.

That being said, after his initial arrival and reunion, I saw him very sparingly throughout the weekend, as he carried that blur as far as he could take it, albeit with a doctor fortunately at his side. When we would rendezvous he would provide me with a recap of his days and nights, and I would believe parts of it and believe that he believed other parts of it. I did not fact check with the doctor, although I feel he might have provided me with a similar conclusion.

As for the music those weekends, here’s a quick rundown…

Rainey Qualley stopped by and sang for us. I only learned after the fact that she too is from Asheville, NC. I don’t think we attended the same high school. I’m pretty sure she’d have wanted to know all of that.

One of Drake White’s videos from the Bud Light weekend got into the Rolling Stone (cue song). 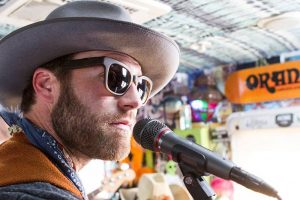 The Dead Ships hung out because they were playing Coachella, which was rad. So once again they were playing a van out in the middle of the desert with a bunch of hopped up lunatics zig-zagging between cactus. The stoke they were on from making it into the Coachella line-up gave an encapsulated idea of why there are so many bands out there for us to find. That is a really good feeling, to be doing what you dreamed up. I’m sure it plateaus at some point, but that first one must feel really good.

The cats from Rusty Maples came down from Vegas, they’re that grateful type of musician, happy for every opportunity, it’s refreshing.

We had a dude named St. Michael for one of the sets, a hip-hop guy. He rolls with a gaggle of people, a few of which are attractive girls, a few of which are skinny dudes (maybe Indian), all are in cropped t-shirts and short shorts. It was a look for sure. The whole squad piled into the Jam Van and shook the hell out of it until security guards showed up looking for one of the crop-top guys who happened to also be the DJ. Apparently he’d gotten into it with the security earlier and they had finally tracked him down to escort him off the premises. Luckily, one of the other crop top guys was able to push play on the track and all was back to bumpin… 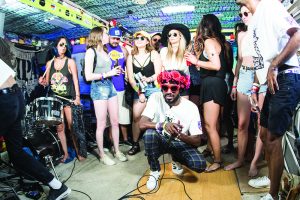 St. Michael and his road posses.

William Elliot Whitmore closed out the excursion on weekend 3 by bringing a baby calf that he found on-site into the van to lay next to him while he performed a solo set. It was the first cow in The Van (to my knowledge). The calf’s owner fully confirmed that he planned to eat it once it became a cow. 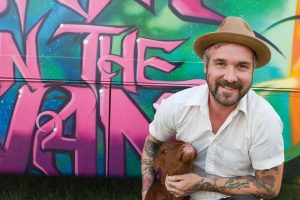 One of this calf’s better days…

I think that’s for the most part, the crucial music stuff for this excursion. At least that I’m retaining. I’m sure you can find the full soundtrack for the three weekend somewhere below. The thing with doing three weekends in a row of something, is that it’s a lot of up and down. You start out with a rush, then that fades out as you get back towards the real world.

All of a sudden you’re back in Los Angeles, the desert is back to being the desert, and you’re in the office. That’s a lot of ebb and flow. So by week three, it’s cool that it’s over, and in this case, even Morty survived, so no casualties.

Check out the entire  playlist, Live from Base Camp in Coachella Valley, CA 2016.