Peace be with you Lil’ Kim… 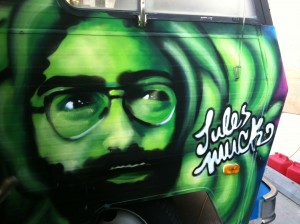 Look how young and virile he looks. Such a stud!

The Muck came by last night.  Started to work some more of her spray-can magic on the van.  Baby girl needed some touch-ups.  We’ve been meaning to get that Lil’ Kimple off her side for quite some time, but, you know, it was a recession yo.  However, we’re pretty flush right now (ed. note: with debt).  Gorilla has taken to using butter on his toast, we’re all showering daily, soap and everything, and I fed the dog yesterday.  Thus, we figured we could spring to get ole’ girt some new makeup.

So when the next band steps inside her gullet, they’ll pass by a different chubby face than every other act before them.  That’s because we finally, FINALLY, got friggin’ Jerry on the friggin’ van.  Not getting Jerry Mucked up on that mobile mural was a bigger oversight than not checking the brakes.  If we had slapped Jerry on there from the start we probably wouldn’t have needed to check the brakes in the first place.   We’re operating with a whole different kind of protection now, head protection.

There were gonna be some more face swaps, but the Muck’s concentration was distracted (ed. note: oh artists, you so silly).  She apparently wasn’t feeling the alley vibes after 11:30, and when her husband (ed. note: err. husband/assistant/slave type situation?) came huckin’ through the alley to protect her, he ended up just messing up her zen and delaying the artist’s process, or some crap.  Whatever, I bet Muck put him in his corner when she got home and flicked cigarette butts at him (ed. note: that’s how I imagine their home life).  I got faith in the Mucktist, she’ll be back to finish, she can’t resist a canvas like that.

In closing, if anyone is close to Lost Angeles and has a big wall that they want her to paint a Bob Marley mural on (outside wall that public can see), holler.  Foreals.

Track for the Day:  “Gimme Back My Morphine” by Henry’s Funeral Shoe off of their second album, Donkey Jacket.  I discovered them on the From the Burro Podcast.  If you like good stuff, you’ll like this podcast.

– That must be convenient, cause I lose crap all the time… (via Complex)

–  When Thizz and the Dawgmaster collab, their songs seem to have a heady theme... (via The Fader)