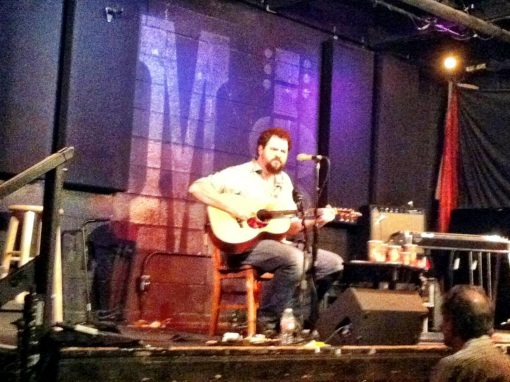 Let me start by saying that I arrived at this show already a huge Patterson Hood fan.  My thoughts on it were predetermined to be positive, however, I could not have anticipated that they would be as positive as what I am about to recant.

So if you’ve never been to McCabe’s Guitar Shop to see a show the best I can relate it is to a small community theater.  It’s the most intimate of settings, with the artist and audience seemingly sharing the same space,  save for a small elevation on the stage, but it’s minimal, because the room is so tight and the performer is so close.  It’s a great way to see a musician that you really dig, because you would be hard-pressed to get closer to them while they put so much emotion into a set.  If you go, go planning on listening to the music and not moving about.  It’s all seated and phones are not allowed, hence our grainy poached images…

First up on the night was T. Hardy Morris.  He’s a soft-spoken dude, he had few words, save for introducing his slide guitar accompaniment and making sure to thank the crowd of about fifty every-time they applauded him.  On this evening he was not the front man for the southern grunge champions Dead Confederate.  Gone was the helter-skelter vibe of their distinctly fuzzy sound.  In it’s place was a set full of very vulnerable and straight forward songs off of his solo debut, Audition Tapes.  His style reminding of Elliot Smith and Nirvana.  Slow, plodding, but yet also constantly reminding that it’s in fact distinctly T. Hardy Morris.  He bends songs in the most unique of ways, taking them to a point where you think he’s about to lose it and fall off track, and then turning them with such professional technique that you hardly remember where he’d just taken you from.  The highlight for the set was “Disaster Proof,” for which he was joined vocally by Patterson Hood.  As of this writing that song is still stuck on repeat in this writer’s brain.

Hardy left the stage around 9PM, there was a short theater-like intermission, during which I foraged across the street at Trader Joe’s for gummy candies.  At around 9:20 Patterson Hood returned to the stage to begin two hours of story telling and singing.

Given the setting and the opening performance it did not take a Mensa candidate to figure out that this show had a certain vibe to it, and that this vibe did not involve hooting and hollering in the middle of songs or singing along.  Yet among the mostly middle-aged crowd there was a surprising number of people who were too dense to piece this together.  The broad next to me thought she was at a Poison show circa ’86.  If she had thrown up her devil horns one more time and “woo-hoo’d” I might have lost my zen and said something that could have gotten me slapped by a wine drunk middle aged woman in cowboy boots.

Luckily Patterson Hood is very with it.  Because about four songs deep he asked the crowd very kindly to shush on it.  Most everyone including the lady to the right of me understood at this point the type of performance we were attending.  Unfortunately there was still one d-bag who was too sloshed to comprehend, and he persisted to act like a loud jack-ass throughout the show.  Most noticeably hooting at parts in stories that by no means deserved celebration (IE: Patterson discussing his great uncle’s death) and talking throughout “Come Back Little Star” a Vic Chestnutt tribute, and also one of my favorite songs.  I believe this got a “somebody smack this ass-hole” from my friend Dave.

Patterson is a down ass mo-fo, as all of his stories about partying, growing up in the south, and writing songs attested to, and bad ass mo-fos don’t take no guff from no d-bags in Newsies‘ caps.  So this little gem transpired between Patterson and the d-bag and the crowd.

“Hey man, if you’re not gonna shut up then get the fuck out. ”

The d-bag, too drunk to realize he’s being addressed, even though he’s in the front row and Patterson is glaring at him fiercely, continues to hoot thinking this reprimand was made for someone else in the crowd.

“You know what man, does everyone in the crowd want this ass-hole to leave?”

The crowd was all in agreement here.

Dude still did not realize that he was getting yelled at so his buddy had to whisper the situation in his ear and escort him through the side exit.  On his way out the guy almost fell over.  Not a good showing for that fella, but I guess he’s got a memory that will last a life-time.

I’ve got some lasting memories from the night as well, but they revolve more around the songs, a mixture of Patterson Hood’s solo-works and his Drive By Truckers’ catalog, and around the stories, each one solidly entertaining, each one told humbly to us as if we were all just sitting around a living room shooting the shit with the guy.  It’s not every day that you get to hear an honest account of where a piece of music came from.  Patterson’s ability to weave his recanted memories from monologue into song was captivating and a truly unique kind of genius.  Anyone who can make a story about a drinking buddy sound beautiful while describing the guy as the type of dude who calls you up as soon as you find an eight ball on the floor of a bathroom, that’s a good story teller…

At some point Patterson let us know that a new Drive By Truckers’ album would be coming around soon, as if I needed more to go home happy about. 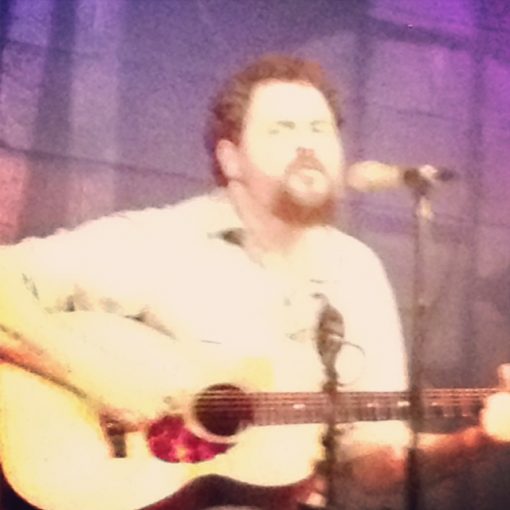 *If you didn’t get a chance to see him at McCabes, T. Hardy Morris will be at the Echo Tuesday July 23 opening for Futurebirds.