Our First Trip to Lagunitas Brewery in Petaluma…

I am allergic to beer.  I haven’t had a beer to my lips in ten years, as drinking enough of them will put me in the hospital with a tube up my butt and a big lady singing along to R & B music over the radio, but that’s a story for another time, or for never. Luckily, when we came to hang with the the heady folks of Lagunitas at their Petaluma, CA brewery, they didn’t ostracize me on account of my stomach issues. They instead gave me cider, which they refered to as lady juice.  I took it in stride while my crew got righteously drunk on what I am told is extremely good beer.

Lagunitas made us feel at home for a couple of days, work days mind you.  Mind you again, that a work-day at Lagunitas means that everyone is drinking beer and acting chill.  It is the exact opposite of the place where I work. 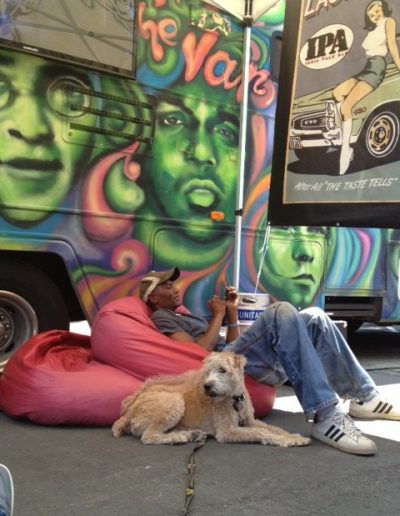 On day one we filmed four acts.  Sean Hayes, Tony Magee, Will Sprott, and The Highway Poets. On day two we filmed Midi Matilda and The Tumbleweed Wanderers. All were excellent. Midi Matilda surprised me the most, as I’d never heard of them before, and along with their music being highly danceable, they used a guitar that looked straight out of a science fiction novel. It looked more like an I-Pad then a Fender, but it made good noise, and that’s all that matters, right? 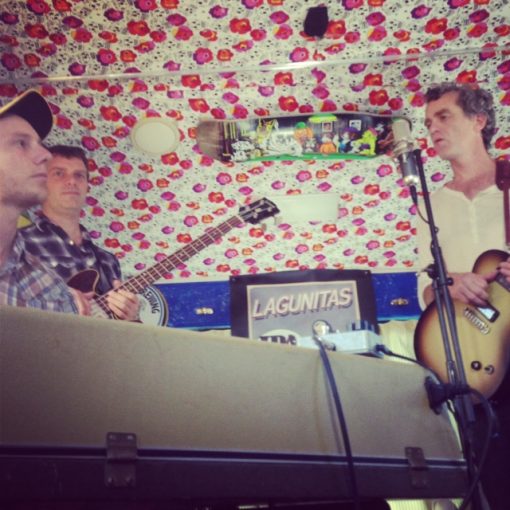 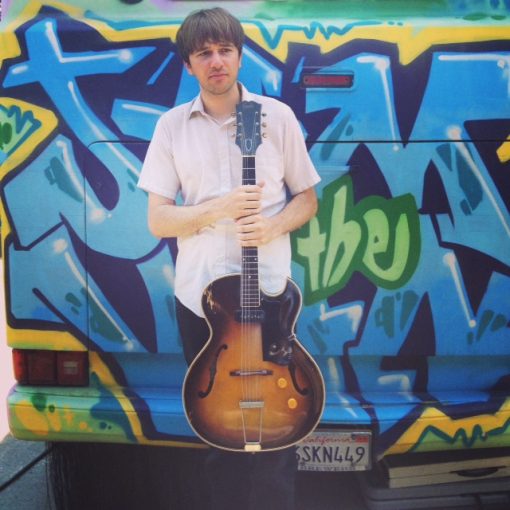 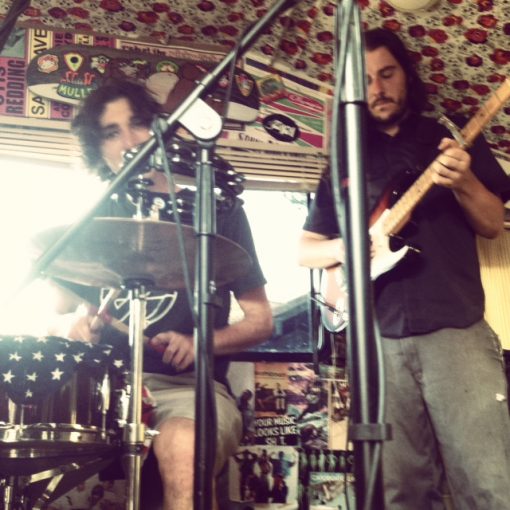 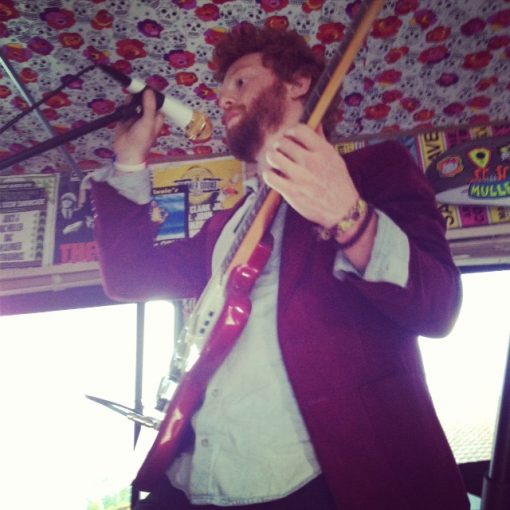 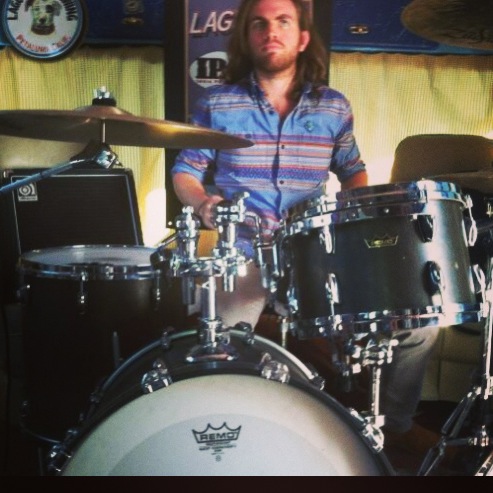 Tony Magee is actually the man behind Lagunitas. King of the Lagunitas, if you will. He’s also pretty talented with the blues guitar, and we were honored to have him and his friend Chris take a ride in the van. Chris graced us with a ukelele version of “Red House,” and that was as impressive as it sounds.

King of Lagunitas (right). Other dude who is nasty on the ukelele (left).

After his session Tony disappeared into his beer kingdom. Which was understandable. If I had a beer kingdom I too would have more important things to do then hang out with us. We were thus left in the very capable hands of two Lagunitas’ employees, Laura and Don, who both made sure that we were taken care of in every aspect. Don by keeping booze in everyone’s system, and Laura by making sure everyone put other things in their bellies other then beer. Lunch, cheese and crackers, etc… She was also integral in uniting Jam in the Van and Lagunitas and setting up all of the shoots we did that week, but c’mon, cheese and crackers takes precedence over most with our crowd.

Now, we’d partied with Don at Bonnaroo only a few weeks prior and I was immediately impressed by his beer drinking skills. So when he gave us a very informative tour of the brewery I was then impressed by his ability to talk intelligently about the processes involved in making and bottling the beer that he is so good at drinking. I of course retained very little of the information he provided, it was very scientific sounding at times, which is tough for me, but I did ooh and aah at all the moving parts and processes that go into brewing beer on a large scale level.

Better then a drone. 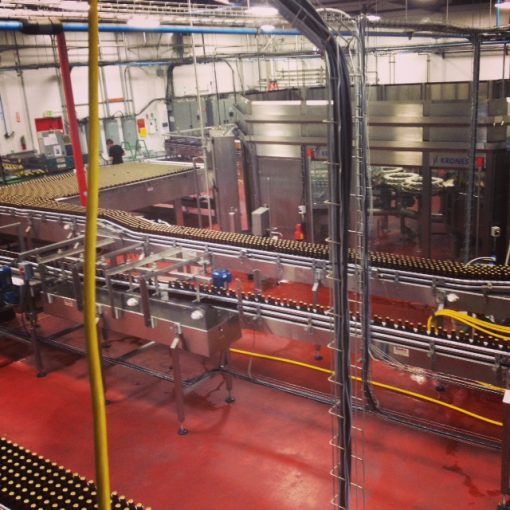 So many moving parts. 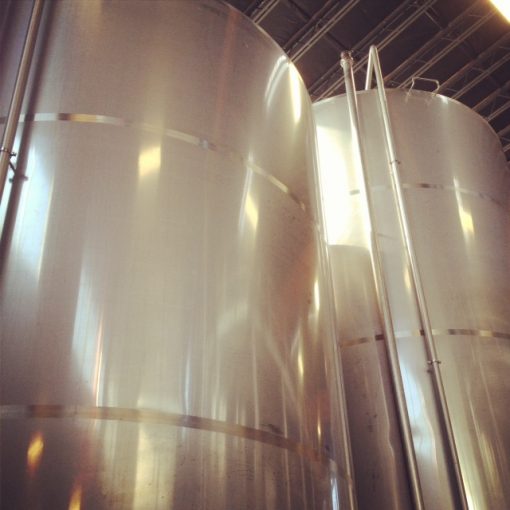 Woulda killed it in high school if I brought this to the kegger.

There are also many mechanisms to the process where one could hurt and or mame themselves with the equipment. So again, it was impressive that these heads managed it so flawlessly. I mean, I didn’t see anyone get injured, I didn’t get injured, my dog didn’t get injured, our crew were all cool, so I assume that’s an everyday thing. I could be wrong though, there’s a lot of beer drinking going on. 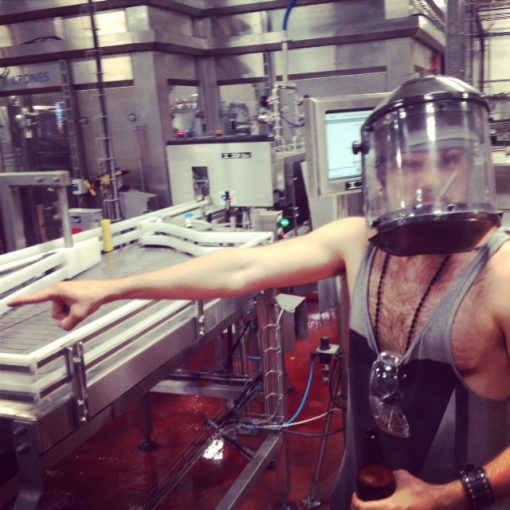 He thinks they’re gonna hire him cause he’s good at pointing. 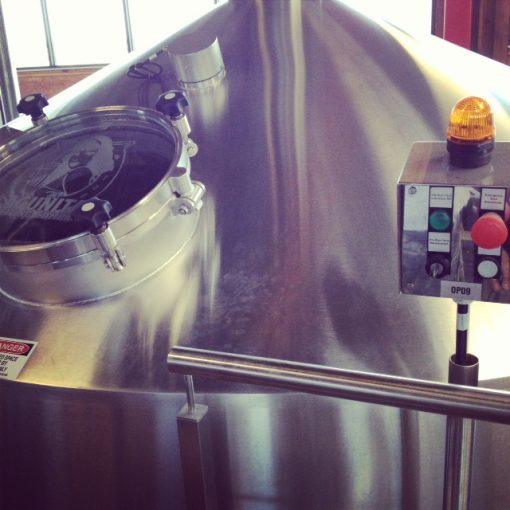 I so wanted to press the button.

Yet perhaps the most outstanding drinking of the trip award has to go to our own Spudnik, who tried to hold his own in a contest of “you drink this,” with Don. Actually it was a taste test, but on his way to trying 11 out of 16 beers Spud was not warned to taste only a small portion of the glass he was handed. No, they were so tasty that he took them all down in full. Shortly thereafter they all returned up onto the bathroom floor, in full. Fortunately Lagunitas is prepared for such an occasion, and they had plenty of rags there for me to clean up Spud’s chuck. 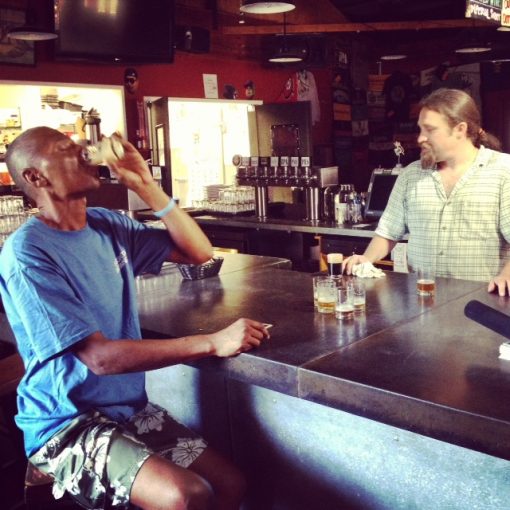 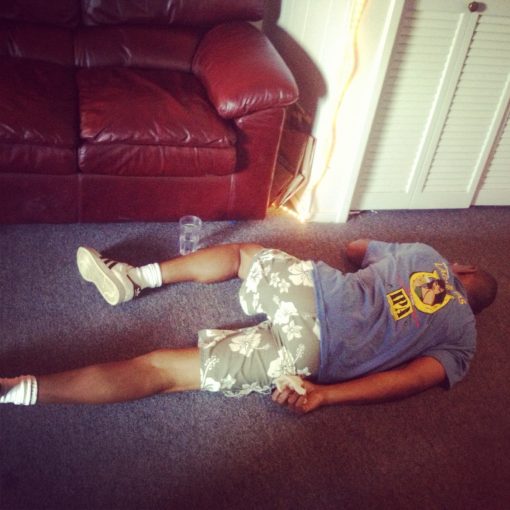 At one point Don took us to hang in the Lagunitas “Break Room,” which is essentially a bar with lots of really cool toys to play with. Like a book that used to be titled “Big Bird Joins the Carnival,” which was then fully altered to read as “Big Bird Joins the Whore House,” by some brilliant mind at the brewery. We read it cover to cover, as well as “Kermit Likes to Get High,” they were both solid books which I would nominate for a Newberry Award if I could. Cheekiness aside, it was little touches like this that made us feel at home at Lagunitas. 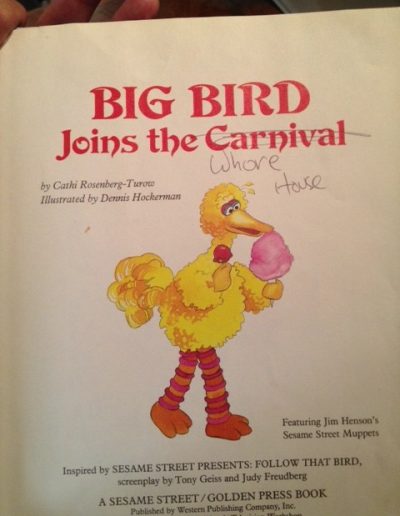 A really good read. Like a really, REALLY good read. 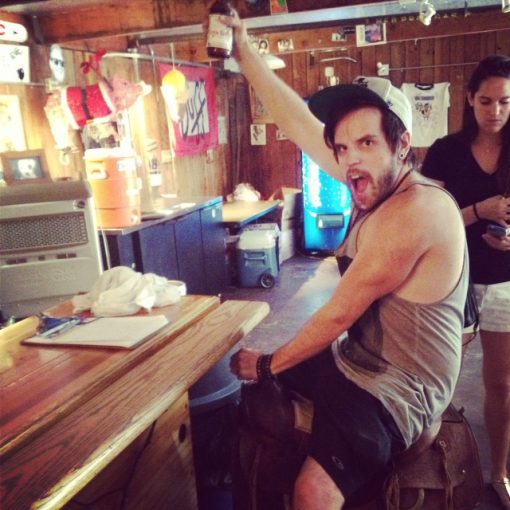 Chick in the back is having a good time in the “Break Room”. 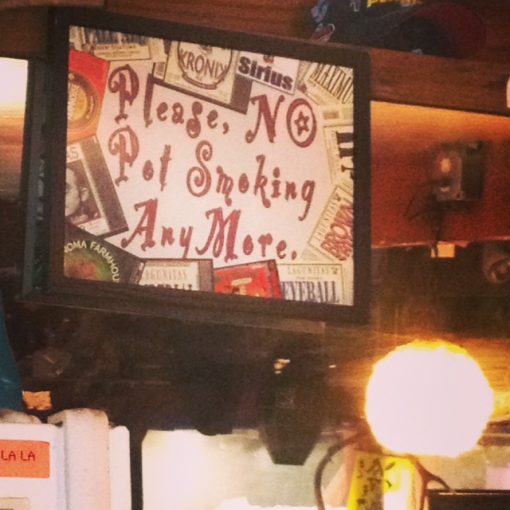 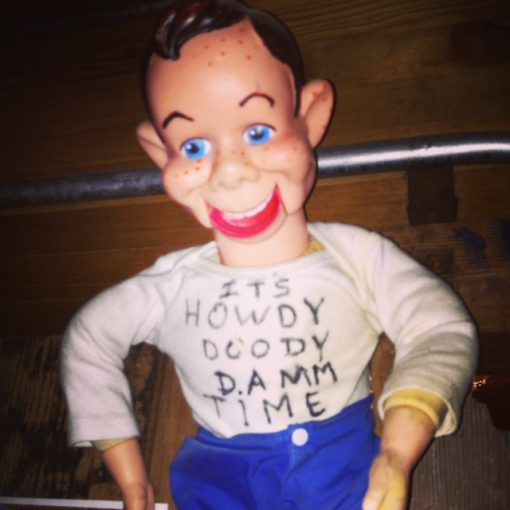 These are our type of folks. They value good times and music. Simple shit. We’re going to make a lot of good stuff with them as the time goes on, so we strongly encourage you to drink their beer, if beer is something you drink. If it’s not, just read the stories on the sides of their beer cases and stay tuned for the videos we’re about to put out. Those should provide plenty of buzz with 0 alcohol content. 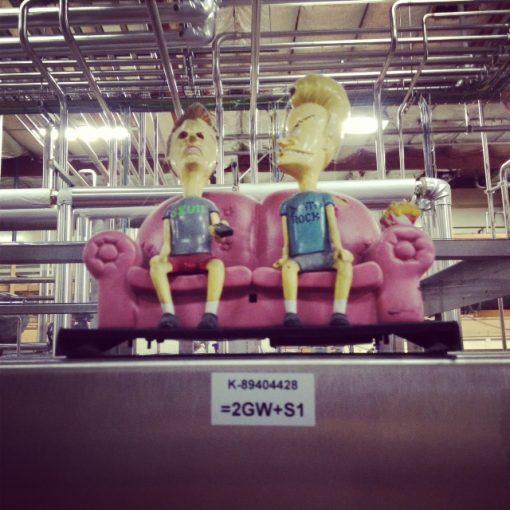 That moment that you know that you’ve met people who get you, and who you get. 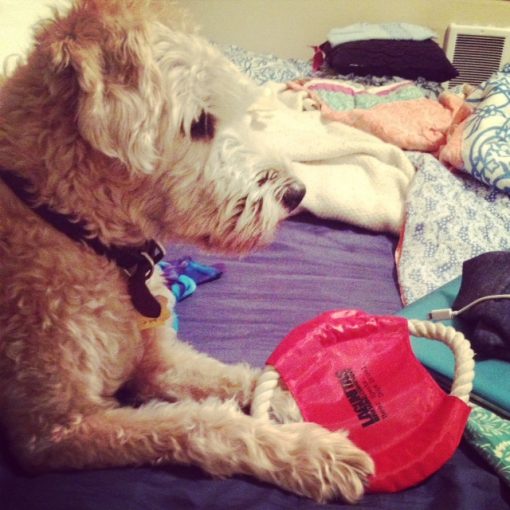 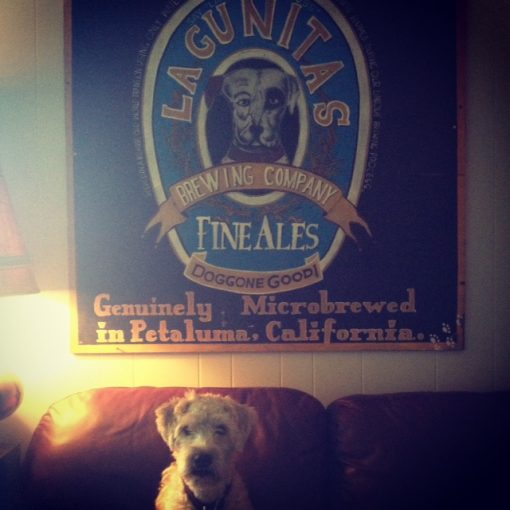 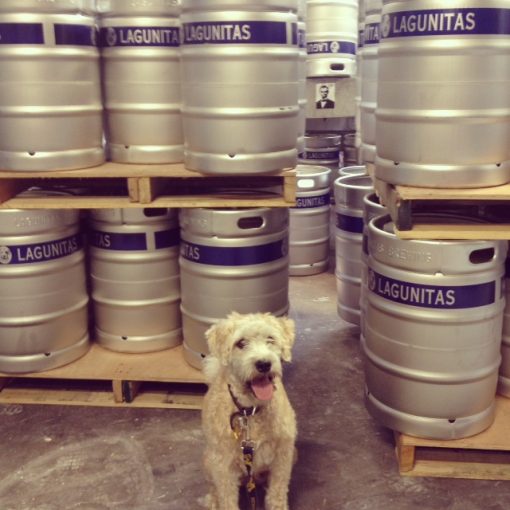