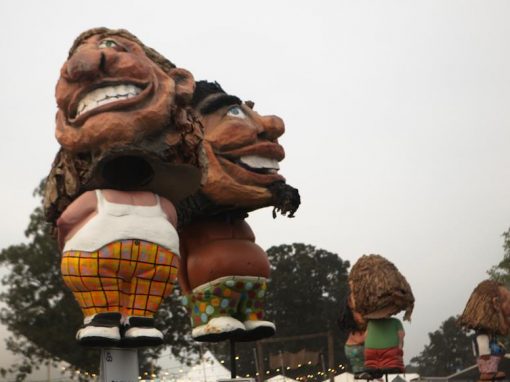 Make sure you’re ready to get heady!

SXSW is over. The Fader Fort has come down, the bloggers have gone home to type, and the bands have hit the road again. Some now in a more lucrative position in the pecking order then they had been before they drove through the El Paso check point. Others just more broke and hungover. Whatever the case may be, it’s done, and all that’s left is to move on to the next.

The passing of SXSW signals the turning towards the heady part of the annual. Things are melting, it’s warm enough to stand outside without fear of your head-locks freezing and snapping off, the conditions are becoming ideal for hula-hooping, corn-hole, and those obnoxious devil stick thingies. In short, it’s time for the real festival season to begin.  The types of ones that you don’t shower at. Us being the types of heads that we are (the heady type), we felt it appropriate to give y’all some helpful tips and pointers to make sure you come correct with your phesting this OH’13 season. Don’t confuse this with any purported “survival guide.” That’s silly. All you need to do to survive is to hydrate and do as my mother always tells me before I leave for Bonnaroo, “don’t take drugs from strangers.” So mostly you need to hydrate.

Read the fine print yo!

Tip Number 1 – Bring Shit that Glows – This is the most important tip on the list. If you don’t hit up the Wally World or the Dollar Tree for glowy stuff then you are a phool and you will pheel left out come nighttime. 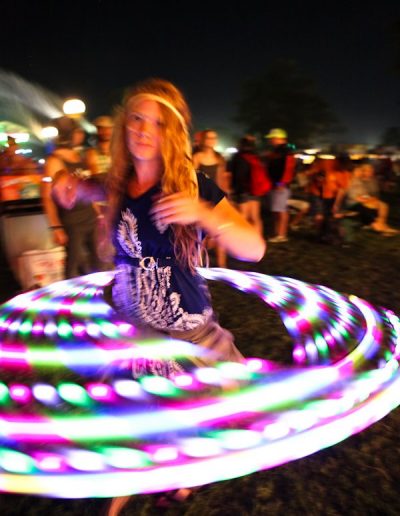 See, don’t you want that for yourself?

Tip Number 2 – Hydrate – Especially if you plan on buying drugs from strangers. If you’re camping and it’s a hot location then your pre-phest supply run should include at least one full cart of water, jugs and bottles. If you bring too much you can always wash your balls and/or other parts with it. You can also take it home, water does not go bad unless you open the bottles and a hippie drinks from them. Then they go bad. 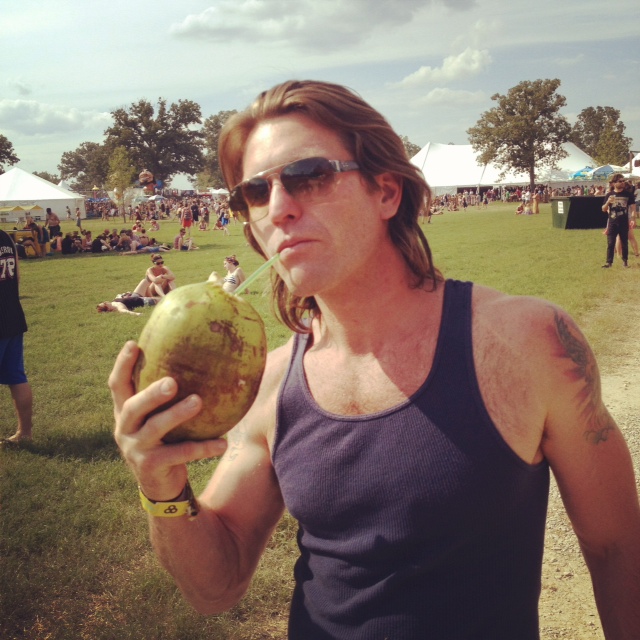 Tip Number 3 – Don’t make plans – I personally don’t like to have a schedule when I walk around a music phestival and i suggest that you act the same.  It has to do with a combination of things, most importantly being that I’m lazy and it’s easier to just ask people to look at their schedules when you think there’s a band you want to see. No plan also means you have better odds of discovering something you’ve never seen but that you’ll swiftly “Like” on Facebook. 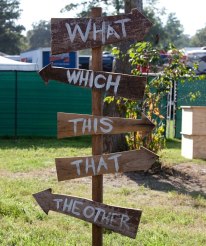 The stages at Bonnaroo, this is why you don’t make plans.

Tip Number 4 – Bring Shit that GLOWS! – I’m serious about this one. We encourage you to split the glowsticks open and spray them on yourself and your friends so that it looks like you’re glowing too. If you get some on a head and they bring bad vibes at you for getting chemicals on their precious skin, then ask them if they did acid that day. If they say yes then tell them that acid is worse for you then glow stick. If they say no, then ask them if they did blow. If all drugs strike out, just don’t splash anymore glow stuff on that dude. 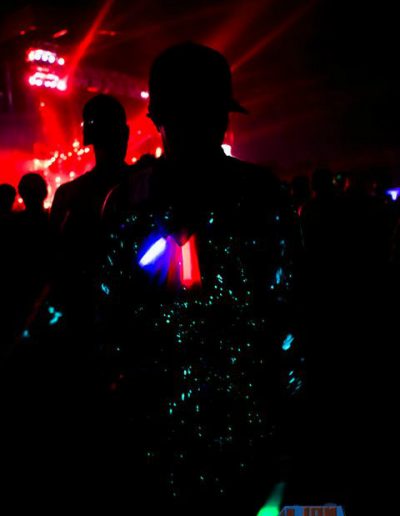 Tip Number 5 – Know that sometimes giving people a beer is like feeding a stray cat – Now, we’re all about good vibes and sharing and being free, but just be aware that sometimes there’s folks at festivals just lurking around looking for heads to mooch off of.  Don’t let that guy be that guy to you! 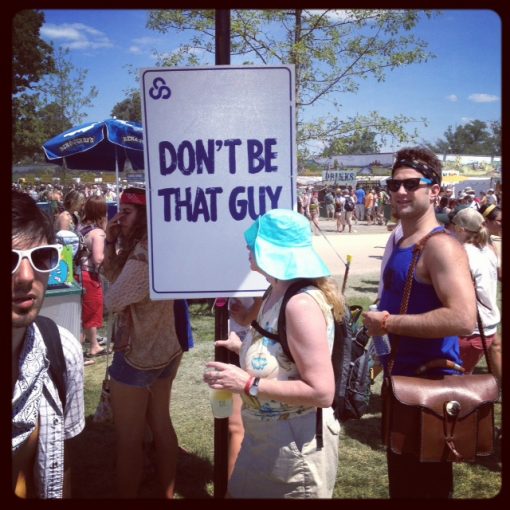 Tip Number 6 – Get some powder – Goldbond powder phools. Chaffing can take down the headiest of heads. If you should forget, and the rub sets in, by any means possible get your ass some cream, literally. I once saw my boy Goose ask a hand masseuse working a booth inside of the Bonnaroo main-stage area for some of her oil or creme. Right in front of her he jammed his hand down his shorts, fixed his situation, and immediately shook some other dude’s hand. The point being, he did what he had to do to get relief, and that’s what you’ll face. 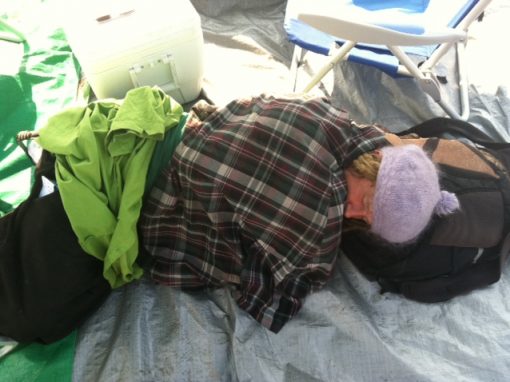 I promise you this guy did not bring powder.

Tip Number 7 – Bring hand sanitizer – Dudes and chicks will shake your hand and give you high fives after rubbing cream on their chaffing. 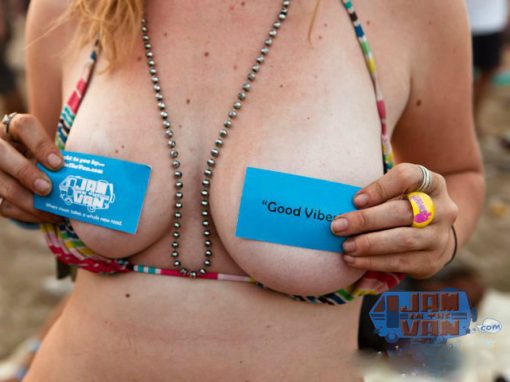 Look how dirty her hands are!

Tip Number 8 – Clear Booze yo – I ain’t gonna draw you a map, I’m just sayin’, you’re gonna have a bunch of water bottles lying around if you paid attention to tip #2 and beers cost like $30.00 a piece from vendors. 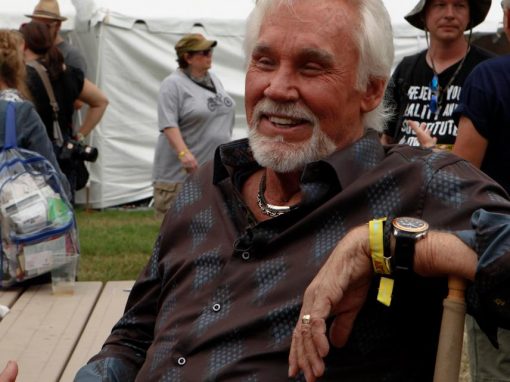 We call that an OG trick, the first one is free.

Tip Number 9 – Get a good base – Don’t try and be Blutarsky, you ain’t got nothing to prove. Have yourself some eggs with your bloody Mary. 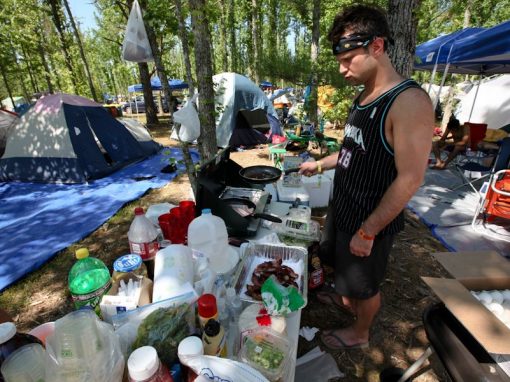 Eggs are best served/cooked by someone other then yourself (IMO).

Tip Number 10 – Pack a lot of underwear and change it frequently – Maybe this one is just me, but I find it very refreshing to get a mid-day dry-swap. If your ass doesn’t sweat then by all means wear none at all. 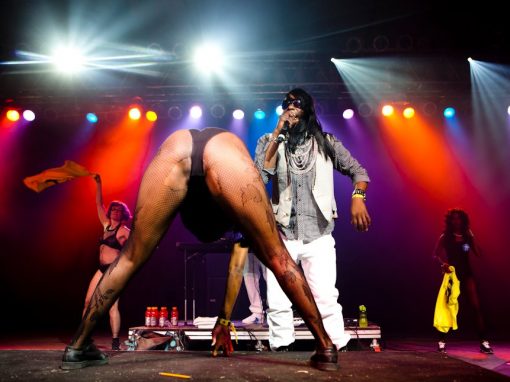 Sweaty Butt = Pain in the Butt

Tip Number 11 – The Shark Fin – When traveling in a pack the easiest way to keep track of your companions as you swim through the crowds is by calling out “shark fin” and having everyone in your group put up their hand in a shark fin formation. Then you never lose anyone, unless they want to be lost, and then they’re lost man, they’re gone. 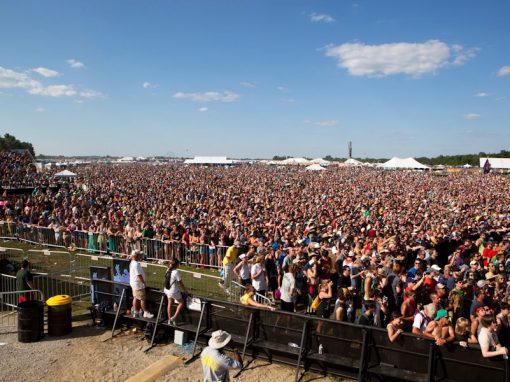 Go ahead and find your buddy in that mess without a shark fin!

Tip Number 12 – Wear crazy shit if wearing crazy shit is what floats your boat – Anything goes! You can wear a onzey with your boobies out if you want, and you should. 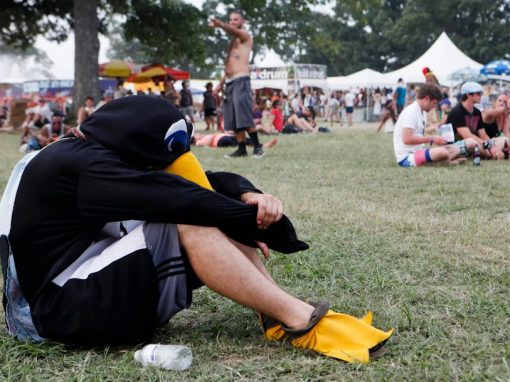 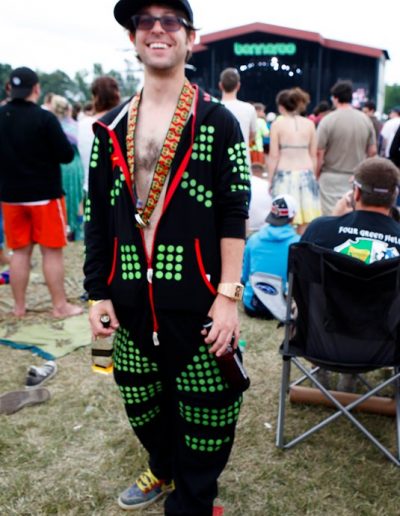 Tip Number 13 – Bring toilet paper and or Baby Wipes – I mean, c’mon, that’s below a JV move to bring no TP, but people will inevitably do it, and again, that’s why you get the hand sanitizer. 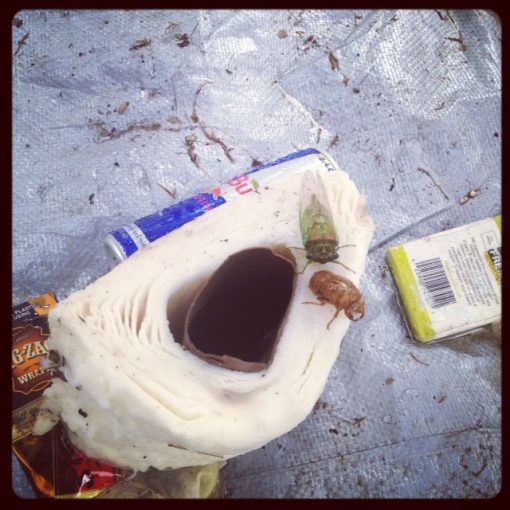 Definitely keep it in a dry place too.

Tip Number 14 – If you eat it, you will poop – Kind of in line with number twelve, if you see some late night munchie food like a jumbo burrito or some chili fries that you want to eat, just remember, while we encourage you to throw caution to the wind whereby many societal constraints are concerned inside of a festival’s grounds, biological rules still apply, almost more so. 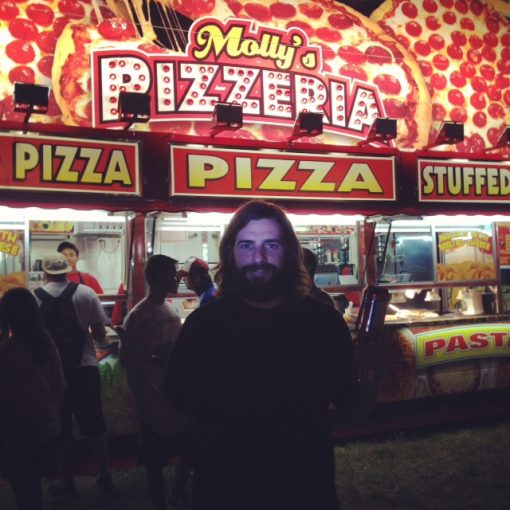 Beware (of everything in this picture)

Tip Number 15 – Leave your bad vibes at the gate – No matter how bad, because they have no place inside of a music festival. If you want to have bad vibes you should go someplace sucky, like CPAC. 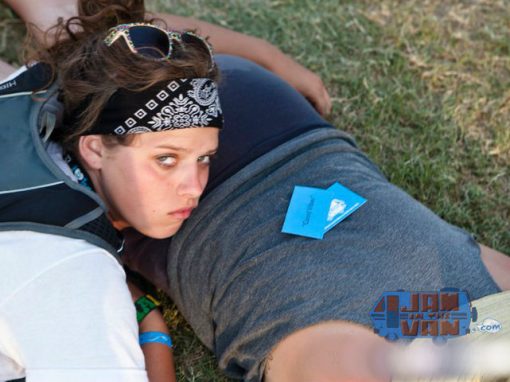 Tip Number 16 – Get rest – Be it at your campsite, hotel, or in the grass at the back of a show, the body needs to sleep, and resting early will help you stay up late, and that’s when things get real wild. 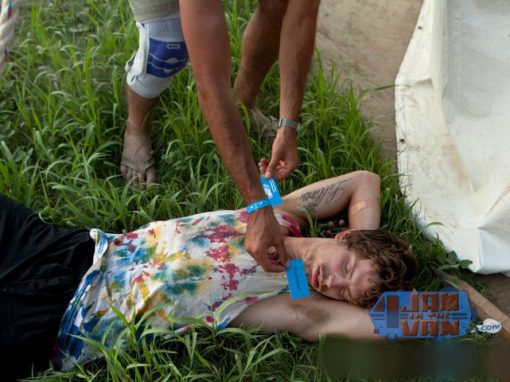 This dude was fully recharged for the 2AM Superjam, no doubt.

Tip Number 17 – Body Paint is Encouraged – Never a bad idea to paint yourself at a music festival.  If you’re worried about the paint becoming bothersome when you can’t wash later on, don’t worry, it usually mingles with all the other dirt and grime and you forget about it after a day. 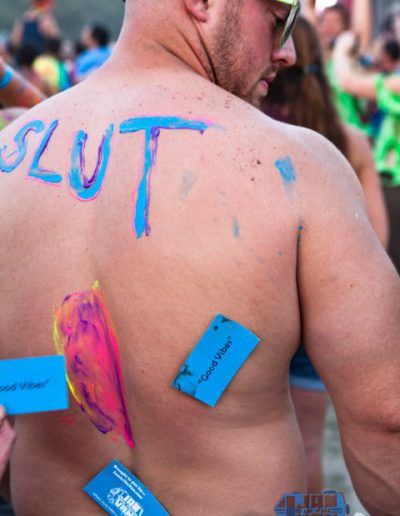 Look how good of a time he’s having!

Tip Number 18 – Pick Up Your Trash – Don’t be a dirtbag, keep your campsite relatively clean, don’t leave your cheese fries on the ground at a stage so that I sit in it later that night.  Don’t throw trash on the ground just cause you think someone will clean it up later.  That’s not heady. 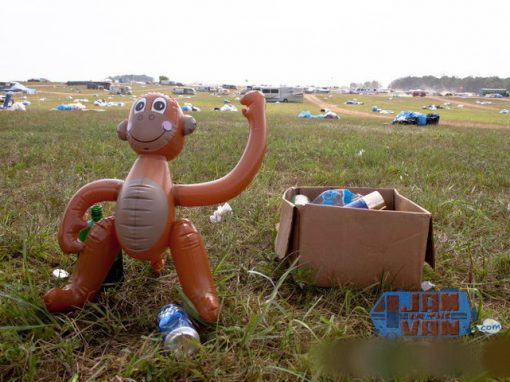 Post festival clean up crew is a high risk job. Pretty sure you could catch any disease imaginable.

Tip Number 19 – Bring some kind of flag to mark where your campsite is – You will get lost. 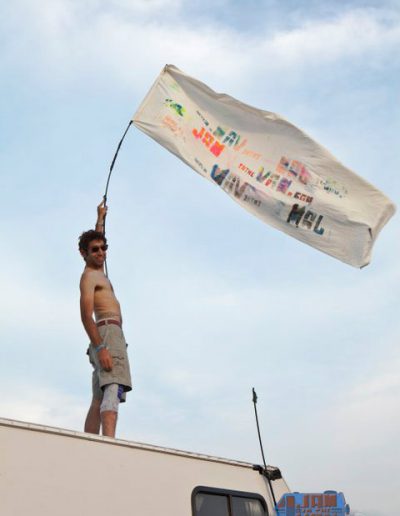 Tip Number 20 – Make Friends – Music festivals are the best because everyone is there to have fun, or presumably so, and so everyone is in a friendly mood and down with that free love.  So don’t be a buzzkill, spread the love! 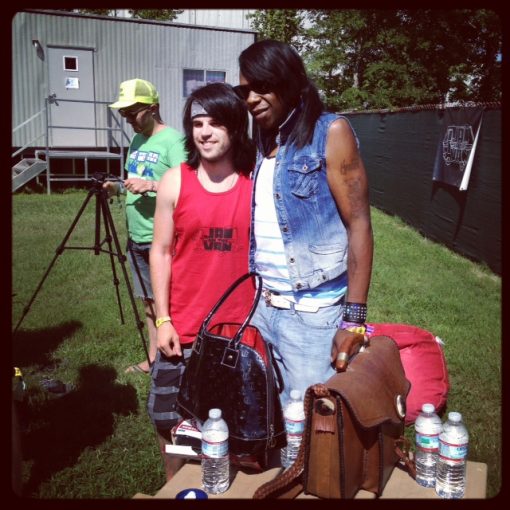 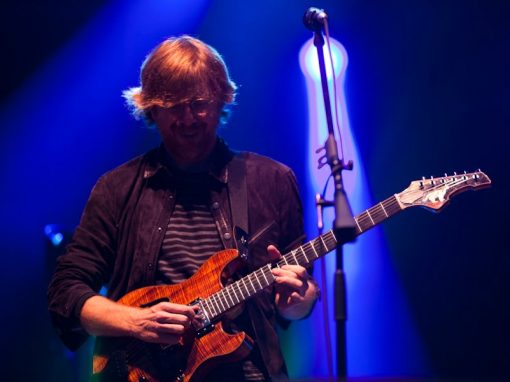 See y’all at the phest!