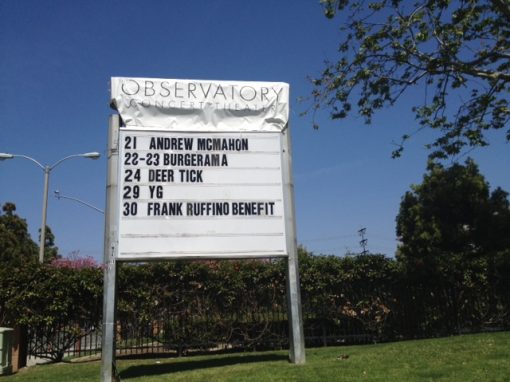 The OC, albeit only an hour drive away, is a far off land to many Los Angeles dwellers.  You need a really good reason to make that drive and to brave the cop and bro infested waters of Orange County.  For us, Burgerama was as good enough a reason as you could ask for.

You see, if you scrape away the blonde-wash off of the top of Orange County, if you get up under the scab, to the crust, you’ll see that there’s plenty of fun to be found in a land where kids might hate their parents more then any other place on earth. Well, at least judging by how some of the high school chicks dressed at this shindig, hating one’s parents as an art is alive and well just an hour slide down the 405. So is punk rock, and fuzz rock, and crowd surfing, and safety pins through the ear, and bad decisions that come in the form of shitty tattoos, and the paramount of excitement that is free beer is tantamount to nothing but the highest of feelings. You were lovely Burgerama, in only the way that something so very filthy can be. 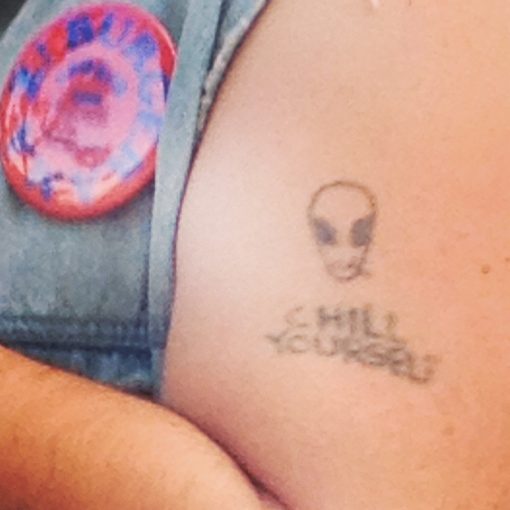 The event was one put on by the dudes over at Burger Records, Sean and Lee. Watch their video “Between Two Buns,” because it can describe them better then I could. However, if I were to so humbly try I would say that they embody the magnificent ethos of Pauly Shore and Stephen Baldwin in the film that was the pinnacle of both of their careers, the epic that is Biodome. 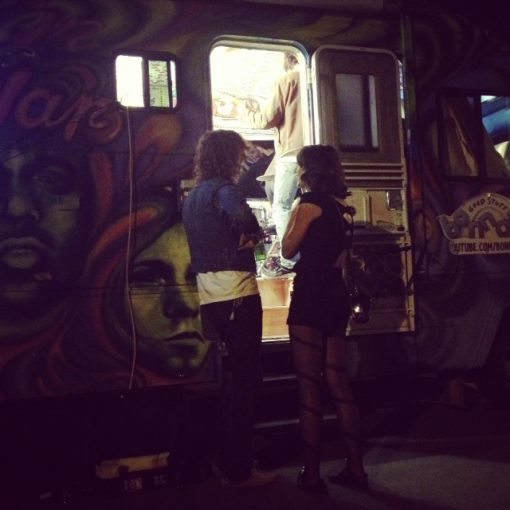 Lee from Burger Records, and a chick, man.

The Burger dudes lorded over this two day celebration of their DIY creation’s success on their skateboards. Cruising from their merch stand, to the Jam Van to shuffle us bands to record, then off to party with The Black Lips, or some other group in the very demure backstage area, where one could aptly only find burgers if you were hungry. They weaved in and out of cruster and punker alike, in a scene worthy of the absurdity that is their record label’s rise to relative success. They’ve achieved their dream of just being liked, being cool, and having cash to buy their own cheeseburgers through putting out cassette tapes in the age of the I-Phone. You have to salute that. Their celebration was as free form and authority-less as you might expect an event thrown by a duo whose rise to prominence came on the back of a dead medium. 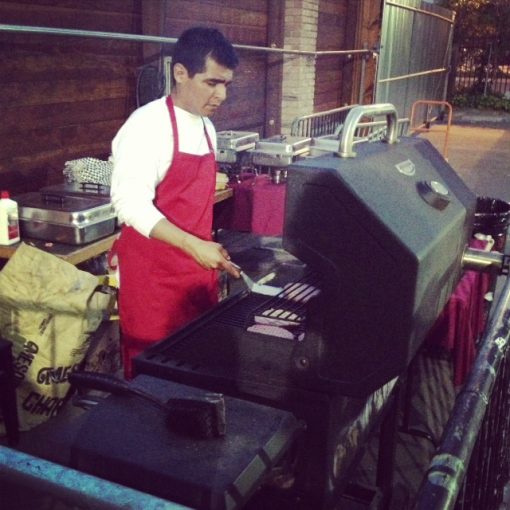 Puttin’ the Burger in Burgerama…

The place teemed with angst, both of the teenaged, and the “time to get over it” varieties. There might have been a running contest for which band could look the most crusty, the nod from these judges going to White Fang with a strong look to Gap Dream at second. A member of that band actually told us he was currently living somewhere that didn’t have a shower, and so when he wanted to bathe it was a two hour ordeal filled with considerable obstacle. I was both impressed and unimpressed simultaneously.

With Burgerama though, I was solely quite impressed. The security was chill. The venue was chill, albeit rather dark, perhaps in an effort to conceal some of the crust and inappropriately dressed seventeen year olds. Which, lord only knows why one would do a thing like that. The performances were worthy of the mosh pits and stage dives that accompanied them for bands both known and relatively unknown. I discovered some tasty music that I’d never heard before.  I will hence forth keep Pangea, The Abigails, and Natural Child on my radar.  I will also henceforth try to find a situation more awkward then watching a Pharcyde concert with a bunch of 19 year old OC punk kids.  I’m sure I’ll find something more awkward quickly, but I’m just saying… I was not surprised when Pharcyde bailed early on their set.  Def. not surprised, but love the image of the Burger guys trying to deal with it. 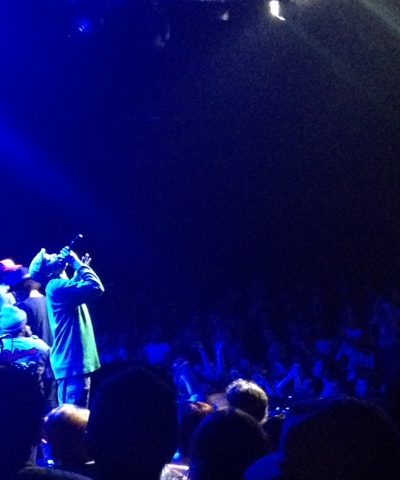 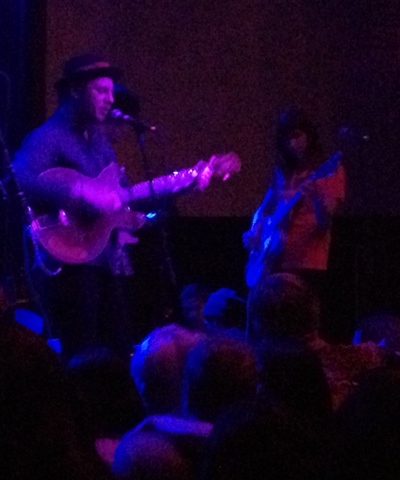 The Abigails, he channels cracked out Bob Dylan vibes, I dig it. 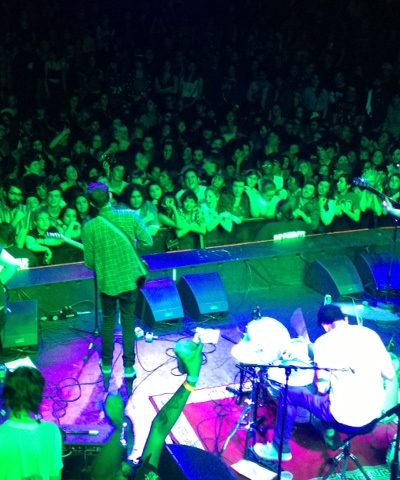 I’d say the event could all be beautifully summed up in the scene that unfolded towards the end of the Hunx and His Punx set. Hunx, who was clearly on one, strutting the front of the stage in his patterned spandex pants, a twinkle in his eye and drunken mischief in his banter called up a girl who was going to let him shave her head during his performance. Security hoisted her up on stage as she pleaded with them to allow her best friend to accompany. Best friend, ha, chick finished shaving her home-girl when, after two passes with the buzzer Hunx grew bored and returned to singing. The song ended with the chick, now bald, shaking her ass at the crowd, sprawled across her silver booty shorts the word “Hunx” written in black lettering. It might as well have read “sorry mom and dad.” I for one am a huge proponent of casting consequence to the wind. There’s strong value in a stage that allows a girl to jump upon it and dance along with the musicians that she loves before she, upon her own free will, thrusts herself off of that stage and into the awaiting arms of a sea of like minded revelers. That shit is how a concert is supposed to be. 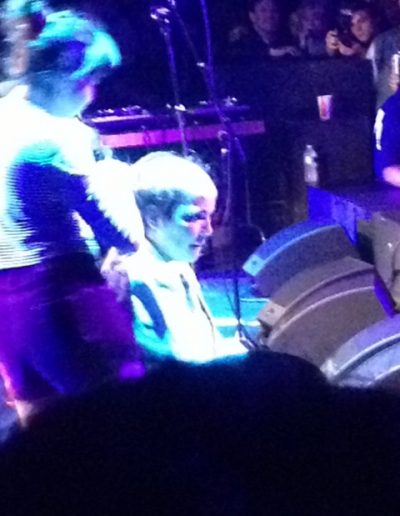 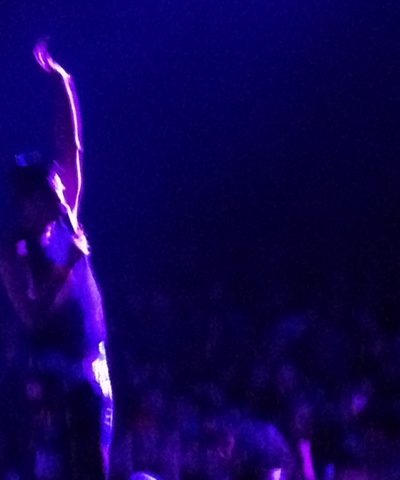 As for our rig, the amount of content we captured was rather impressive given how obliterated most of the musicians were once nightfall set in. Yet we only saw one drummer throw a maraca at our sound guy because she forgot her drumsticks, and we only saw one person fall out of the van because they were too drunk. It happened to be the same person. She had a good time at Burgerama too. Below you can see who we recorded. For me it was a toss up between Pangea, Natural Child, and Tijuana Panthers for my favorite van sets. Although, I was impressed by the diversity, creativity, and youth of a lot of the bands. The OC has some good rage left in it, I’m glad there’s dudes like Lee and Sean at Burger Records to keep that fire stoked. 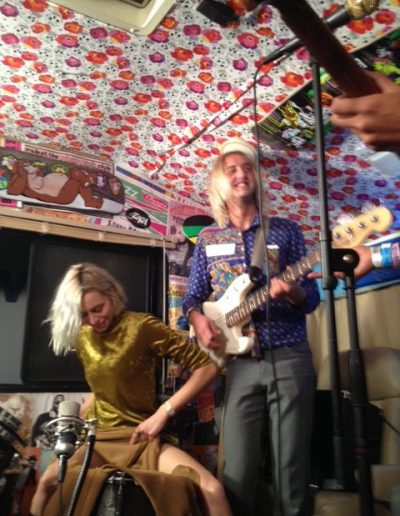 One of these people threw a maraca. 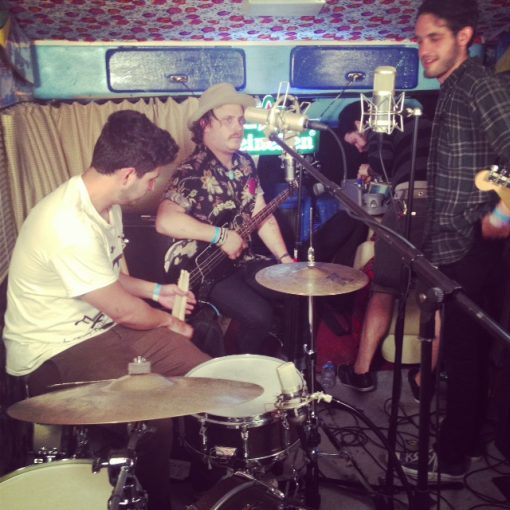 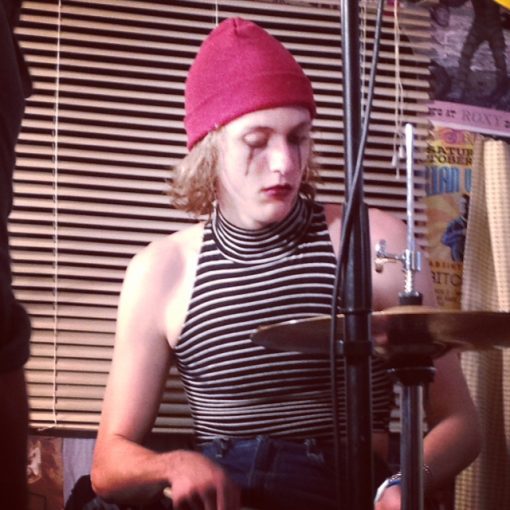 The Garden looked so sad, but hopefully we made them happy. 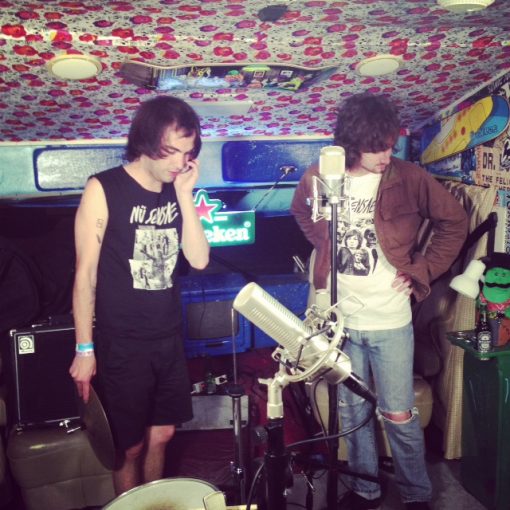 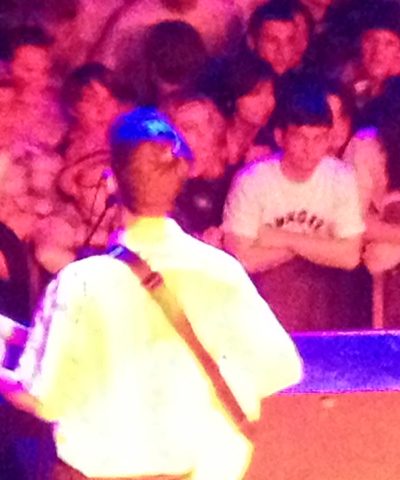 Anyone know who this band is? I wuz a bit out of it. 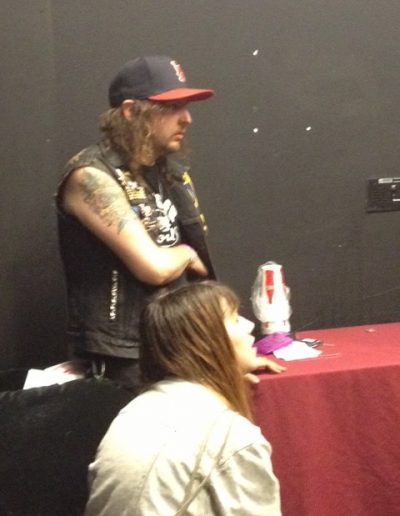 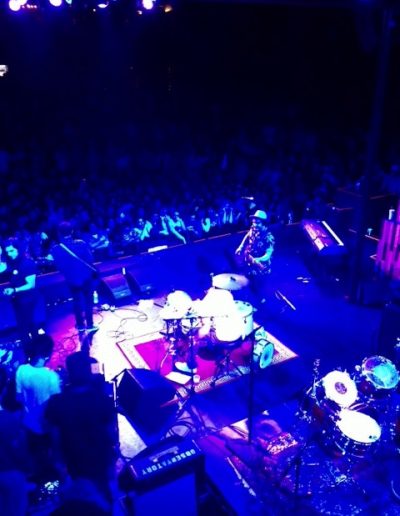 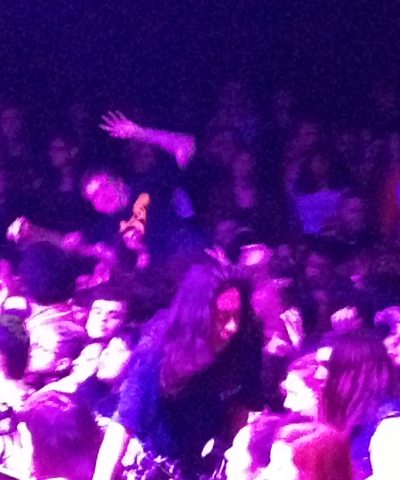 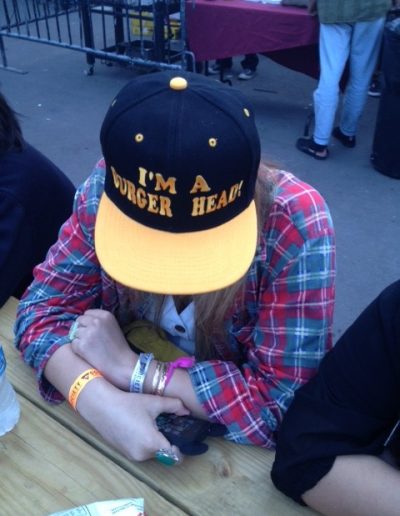 I mean, aren’t we all? Just a little bit?

When the final set of Burgerama was played by Ariel Pink and all the crusters had crawled back towards their drainpipes and damp bedrooms, the Jam Van still stood planted in the Observatory parking lot. Because what’s the point of going out to Santa Ana if you ain’t gonna stay a while?  Especially if Deer Tick is coming through on a Sunday, the Lord’s day. The Lord being Jerry Garcia, in this case.

So we made a day of it. Invited a band called The Highway Poets to drop by on the last leg of their tour, en route to return to their Petaluma home-base, they had one more night of good partying left in them. So they brought a butt load of Lagunitas beer and everyone got smiley. They also taught me a new word for cruster, norgle.

Ivory Deville also cruised over. These fools rode in on trucker-pill fumes after driving seventeen hours in a day from Colorado. Both bands stepped into the van to sprinkle their own version of sunshine on a small crowd that gathered around in anticipation of Deer Tick’s set. 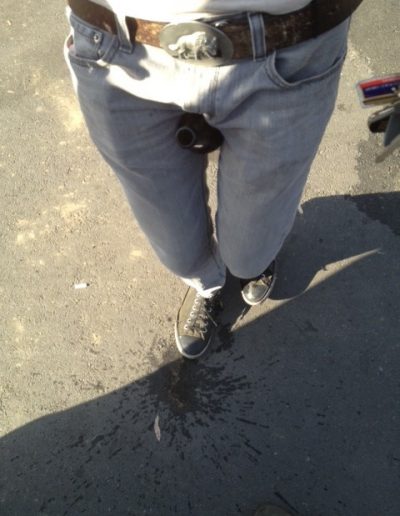 The Wolf messed himself…

Then, when Mr. McCaulley and gang (Ian O’neil and Dennis Ryan inclusive) did their thing, man, it went from a scene where everyone was chatting away, drinking beer, laughing, to one where everyone was just staring dumbfounded at the magic that was coming out of that RV. Something about the voices in that band, they just kind of freeze people in their tracks, you have to pay them homage, because it all sounds so… not just so nice, but so damn genuine, that you don’t want to miss a moment of it.  As cheese ball as this statement may be, it was damn special, and sughs to you if you don’t believe me. 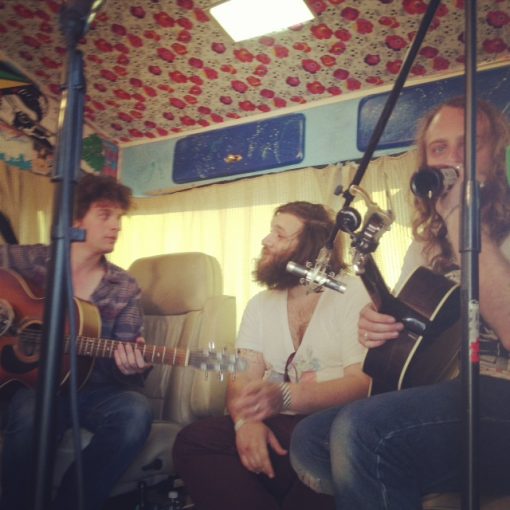 I also appreciated that Mr. McCaulley took the time to tell us that the most acid he’s ever done was fifty hits in one weekend at Joshua tree. That was a cool treat for the Deer Tick fans that had the good fortune of catching this bonus show. You don’t get that with your admission ticket. Being one of those fans myself (like big time), I geeked out a lil bit.  They played Miss K almost three times because Dennis Ryan kept messing up the chorus and everyone would burst out laughing.  That was a pretty content way to close out a weekend for this guy. Our thanks to Burgerama, The Observatory, and of course all of the bands and all of the heads.  Stay crusty, it’s more fun that way. 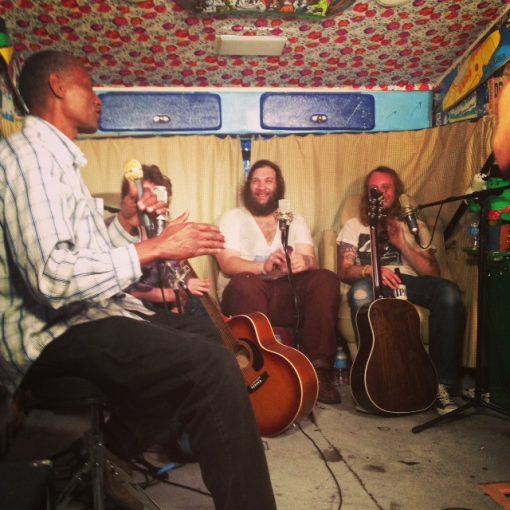 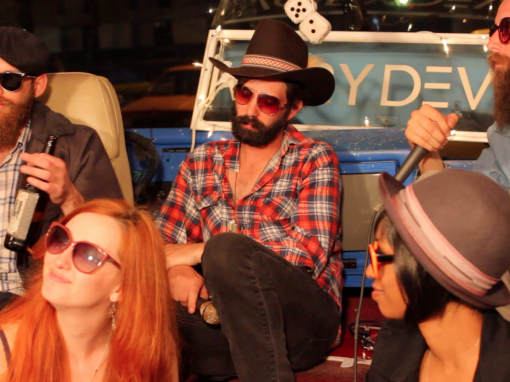 Dudes just wanna sleep, but we made them do an interview, suckers. 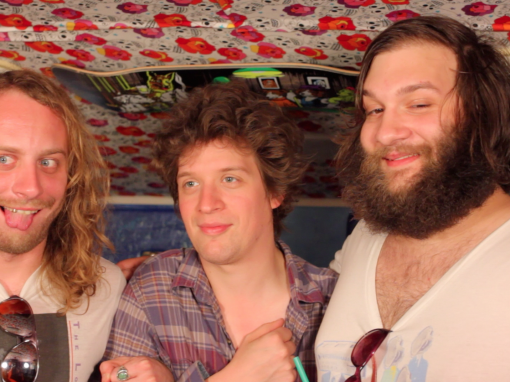 Can’t see where anybody’s hands are in this one… 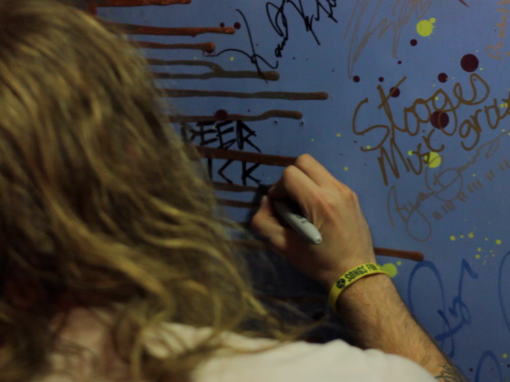 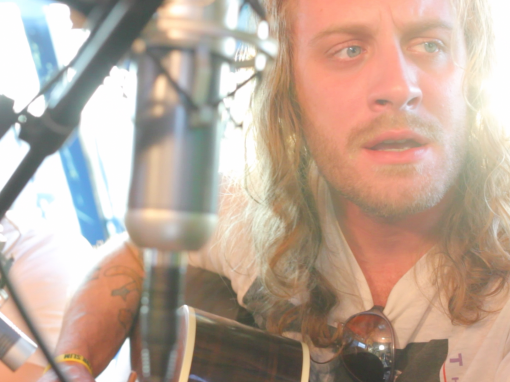 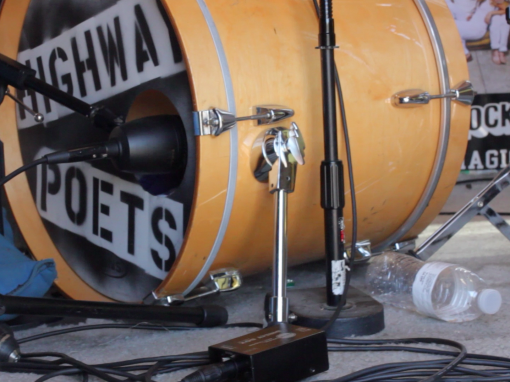 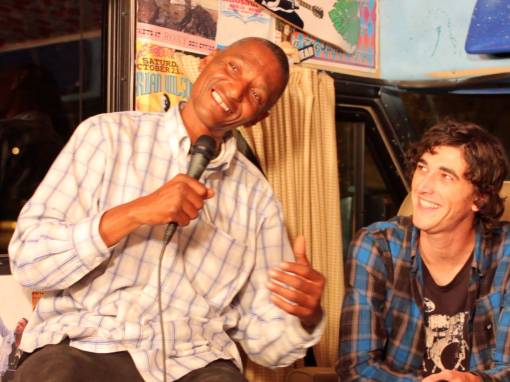 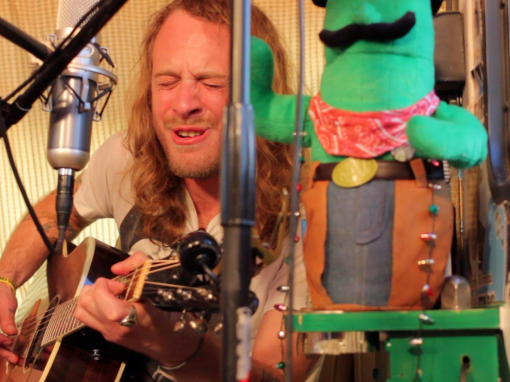 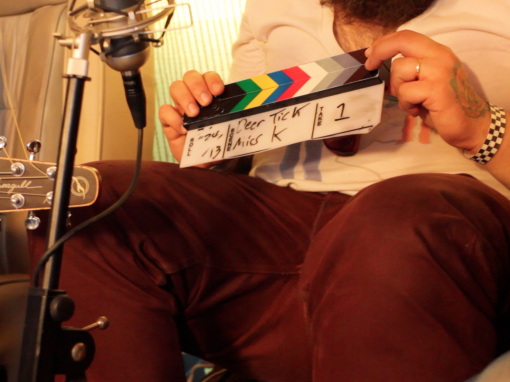