Friday, July 26, 2013
Gray skies and misty rain greeted the crowd as the first day of the three-day long Newport Folk Festival kicked off this Friday. But the weather didn’t seem to stop anyone from having a good time.The traffic on the Newport Bridge kept us from enjoying the opening acts, but JD McPherson’s raucous set made all the traffic-induced tension fade away. The crowd twisted and grooved while JD crooned and growled on the main stage to some amazing tunes, especially the short and fun “Fire Bug.”  “She could light a fire, she’s my little fire bug.”

A short walk around the earthen berms and stone structures of Fort Adams got us a full tour of the site. Because of the Festival’s location on the waterfront, the space can feel both intimate and expansive. It all depends on where you decide to take it all in. For instance the main stage, called the Fort, feels more like your traditional festival venue. The musicians are set up in a temporary metal structure and the crowd is spread out before them in a half moon. The Bay is behind the crowd, and when the weather is good the water is just as full as the land with onlookers (do the folks on the water have to pay for tickets)?

Take a walk around one side of the massive stone fort structure and through a dark stone tunnel with notches in the giant pieces of stone where they must have rolled out the cannons and you are inside the fort. Though the sky is above you still. In that inner courtyard is another stage, called the Quad. This is where we took in Blake Mills’ final few songs. I especially liked the sweet love song, or broken heart song called “7,” which he told the crowd was a cover of a song by his good friend Mt. Egypt.

Then it was time for Phosphorescent, who is really the main act I was excited to see.  The set list follows:

The band was tight. When they started out it looked like Matthew Houck was praying to the dragon on one of the speakers.

Terror in the Canyons flowed from soaring to rockin’ to heartfelt to crazy rock. Houck’s signature “Hej” appeared on the second song, “The Quotidian Beasts.”  Jouck tipped his Mets baseball cap down over his eyes to focus inside/feel his jam.  And this song is where the long-haired, skinny-legged organist really stood out.  “Down To Go” was a heartfelt waltz that brought the crowd back to the folk side of the Folk Fest.

“Song for Zula” had a bass line and keyboard that combined to make an 80s sound.  Then the band played Ride On/Right On, and the whole crowd got up to dance. With the line, “Take your greedy hands and lay them on me,” Houck pointed at someone in the crowd and everyone turned to look. I don’t think he really targeted anyone in particular, though I was expecting to see a super model or the like sitting in the crowd. This was the song that first turned me on to Phosphorescent, and this performance reminds me why I went back for more.

Unfortunately on the last three songs of the set the drums and bass completely overpowered the other musicians. I’m not sure if the sound person changed some settings or if the band wanted to change their sound to something more overpowering, but the experience was a little less enjoyable.

Saturday, July 27, 2013
Saturday started with a ferry ride from Jamestown to Newport.  The ride was beautiful and we talked to a young family. The mother was from Rhode Island and had been to the Folk Fest many times before. She said it was more popular now, but still the same basic festival at heart with a beautiful setting and great music.

The setting definitely was beautiful, with sunny skies, a steady sea breeze, sailboats tacking off the coast, and seagulls soaring above the stages. Fort Adams creats a unique setting for music, with massive stones and earthen berms touching everything with the weight and depth of it’s history.

Once the ferry landed we were off to catch our first show. Hurray for the Riff Raff warmed up with “Blue Ridge Mountain” sung beautifully by the bands lead singer Alynda Lee Segarra, who said the song was inspired by the Carter family. You can’t get much more folky than that.

Nicki Bluhm and the Gramblers performed on the Fort Stage.  The line-up there seemed to be more rock-centric, which wasn’t necessarily a bad thing.  Nicki kind of floats somewhere in between the genres, and the crowd floated with her.

Rayland Baxter performed in the Harbor Tent, where a smaller crowd could get up close to the artists.  He played solo in the beginning of his set and I loved his first song, “The Cold, Easy Life of a Loner.”

Some other highlights of this day, which was epic, included Houndmouth, from my native Indiana, Shovels and Rope, and Jim James.

Seriously, Jim James’ set was one of the best and most enjoyable I have ever seen, anywhere, period. He was on the Fort Stage. He rocked. His bass player (who was female) was rock solid and awesome.  Jim James’ Flying V guitar was on a stand so he could rotate around the stage and raise his golden panda statue to the heavens. He sang, he danced, he played tenor saxophone. The drummer took an extended solo in the 3rd song and everyone left the stage. On New Life James paused at one point in the song, and the whole band was quiet. The crowd waited, and waited, and waited, it must have been about 30 seconds, maybe more, until the music started again. Truly awesome!

I had to leave that fantastic show to go see Father John Misty (he never liked the name Joshua, and he got tired of “J”).  I had wanted to catch him live for a long time. Of course this is one of the things that sucks and is also awesome about festivals, it’s so hard to choose who to see and how long to stay. You can’t do it all!

Father John was the first artist I heard who actually criticized the festival and the crowd. He said things like, “I just got invited here because I’m white and I have a beard and there’s some acoustic guitar on my album.” At one point he called himself preachy and antagonistic and promised the crowd it would be all “smooches and cinnamon buns from here on out.” No one seemed to mind, and the crowd cheered and clapped for him. We even danced (how could you not to such great music)?  But I was glad to hear a little edge and a little cultural criticism in what he said. Folk was socially conscious back in the day, and the Folk Fest seemed pretty short on that kind of talk. Mostly it was just fun, but it’s nice to get a dose of reality now and again.

Sunday, July 28, 2013
Sunday was a little overcast, but still a beautiful day. It started with some activism from the Berklee Gospel Choir, who hoped that we would take their message out into the world. Michael Hurley reminded us of the roots of folk when he started with a song about Monsanto that asked, “Have you no children?” He commented that he was going to perform the song because, “I thought somebody should sing a folk song.” Then it was time for Ramblin’ Jack Elliott on the Fort Stage. The last time I was at the Folk Fest I had seen him in the Harbor Tent. This was a much different setting, the stage was much bigger and higher, but it still had an intimate feeling, like sitting at your grandfather’s knee listening to him tell stories and make jokes about the good old days. The stories were numerous, about those who he learned his songs from, or how long he spent with Woody Guthrie, or the time he traveled by car from London to Turkey. He also brought up sailing a lot, even mentioning that one of the sailboats he could see from the stage was sailing backward. His last song was Bob Dylan’s “Don’t Think Twice, It’s All Right”.

Michael Kiwanuka came up on stage next. His band was great, though I wished I had heard a few more solos from the lead guitarist, who seemed to be holding back, especially on their cover of the Jimi Hendrix tune “May This Be Love.” Kiwanuka credited Hendrix with inspiring him to be a musician.  My favorite song of their performance was “Rest” which was a sweet love song that reminded me of Taj Mahal.

Bonnie “Prince” Billy and Dawn McCarthy were the highlight of Sunday. Of course Beck, who played after them, was an awesome rocker. He dressed like Bob Dylan and even did some “folky” versions of his songs. But Bonnie “Prince” Billy is what stuck with me when I left for the day. The band sat around one mic and played in a semi-circle facing each other. Their voices blended well and it was a joy to watch them. This was the other side of folk which I had been missing, the community of musicians. Here they were all together singing, and enjoying themselves. It was humble. They sang, “Little Yellow Bird,” which goes, “I couldn’t keep it and I loved it, my little yellow bird.” Unfortunately I couldn’t keep the folk festival either. And the next day I felt really refreshed as I started the week but also a little sad, like I lost something, my little yellow bird. 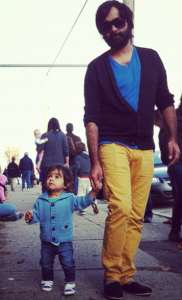 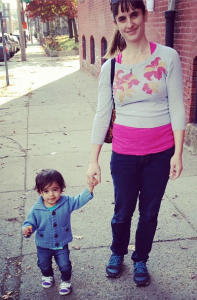 Jasdeep and Melissa live, work, and hang in Rhode Island. Their daughter Mira, almost 2, never ceases to amaze. Jasdeep (aka Jazz) collects records, listens to his music too loud, fixes up a killer Old Fashioned, and is thinking about insuring his beard. Melissa (aka Melly Mel) grows amazing things in the garden, reads the New York Times daily, makes homemade bagels like nobody’s business, and hates her iPhone 4.