The Mountain Oasis Summit descended upon Asheville, North Carolina for it’s inaugural run.  Replacing what once was Moogfest, Mountain Oasis picked up right where the former left off, bringing a diverse bill of electronic musicians into the mountains for Halloween weekend.  It was a different name, but the same old glow sticks and decked out heads in search of that elusive drop.  We sent Max Witt into the mix to sample the festival’s array of lights and sounds.  He took some pictures and left some words about what he came, saw, and danced to. 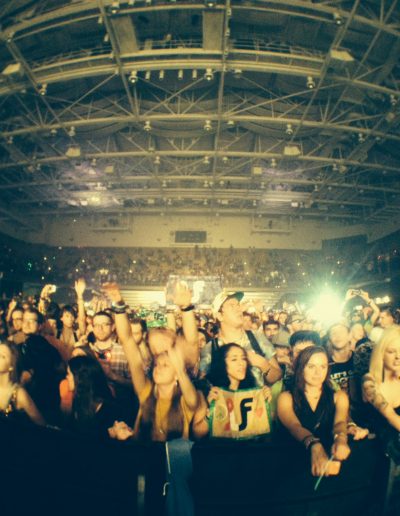 Anticipating that I would find myself amidst a wide array of flashing lights and lasers, I began the night with several beers, as tackling all those trippy colors sober could lead to a seizure.  There’s no scientific data backing that up, it just seems right.  A few beers deep and now brimming with confidence I headed to the heart of downtown Asheville, which on any given night can seem an epicenter of strange and crusty, catch it on a festival evening and the vibe is extra thick.   Deltron 3030 kicked off his set with the hit “3030.”  He was backed by a horn section, a choir, dj, guitar, drums, bass, and Dan the Automator dressed in a full conductor’s suite with tails and all.  Del relied on orchestral sounds and samples to mold his unique brand of hip-hop. Mixing styles and cultures, these one of a kind sounds gave Del an epic background that not many rappers have the luxury of dropping their bars over.  He pulled some tunes from his new album “Event 2,”as well as pulling from some of his earlier catalog.  The set wrapped up with a cover of “Clint Eastwood” by the Gorillaz and I found myself only needing to walk up a flight of stairs to find Neutral Milk Hotel in the Thomas Wolf Auditorium, which is in fact connected to the Civic Center where Deltron performed. 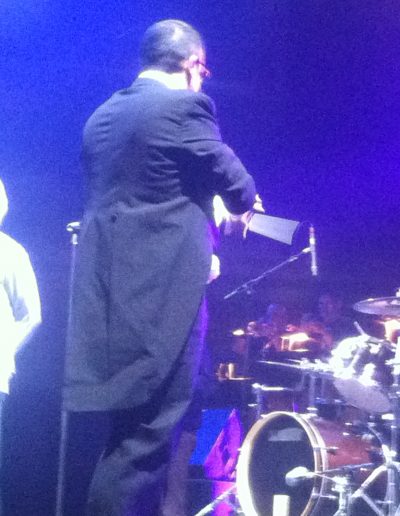 Deltron 3030 with the mixed on stage dress code.

Although this band seemed a little out of place in the EDM heavy line-up, The Thomas Wolf Auditorium was nonetheless stacked with Neutral Milk Hotel fans (not the most sexy looking of crowds).  They all freaked as a humble, heavily bearded, Jeff Magnum stepped onto the stage, picked up a worn acoustic guitar and got right into the good stuff with “Two Headed Boy.”  The song ended without pause as the full band joined in on a raucous “folk punk” waltz. The slow 1…2…3… pulse made the crowd sway back and forth, while a trumpet and french horn laid out a simple but powerful melody.  The combination of brass, accordion, and folk guitar is Neutral Milk Hotel at it’s best.  A little weird, a little gypsy-ish, it’s folk music on the odd tip, emotional and deep in both meaning and sound.  I would have lingered longer but the night was still fairly young and the scene in the Thomas Wolfe was a bit sleepy compared to what I figured I might find over at Bassnectar.  So I made a b-line in the same direction that a swell of scantily clad females was going and figured that would lead me to the drop.

My intuition was correct.  I could barely feel my face once it started. Never before have I had this happen to me, but I thought I was going to swallow my throat. I can handle bass, but hot-damn, it literally shook my clothes and almost made me vomit from the reverberations. Rhythms blended together in crazy hemiolas as Bassnectar is a master at leading everyone to that always anticipated magical moment, the “drop.”  The whole crowd pulsed to his rhythm, while projections of clocks, hummingbirds, and butterflies spun across the stage. Bassnectar did well to mix the head throbbing bass with quieter atmospheric moments that gave you a minute to recuperate.  Had he not done so we may have lost a few heads.  Possibly in celebration of everyone surviving he closed out his set with a mind blowing display of confetti that rained down on the crowd and stuck to their sweat drenched skin. 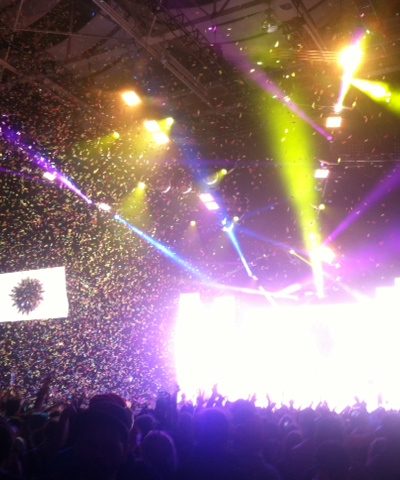 After you win the Thizz Super Bowl they throw confetti.

Night two for me began with Bosnian Rainbows. This is a super group of sorts with Terry Gender Bender on vocals and Omar Rodriguez Lopez from The Mars Volta on lead guitar.  They bring that heavy electronic-grunge sound, with some metal-ish vocals. The drummer played set and synth at the same time which was rad. Terry did some new aged dance type stuff around the stage and worked the audience into a trance with her moves.  The crazy light show also helped to induce that trance.  Electro-grunge-metal is a pretty tough combo.  Tough in a good way. 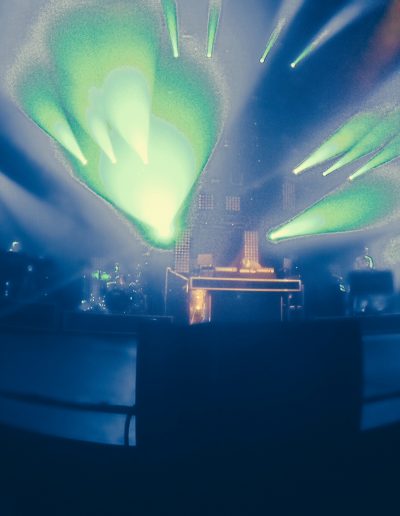 “Here in My Car,” that’s who wrote that song, Gary Newman.  Picking up where Bosnian Rainbows left off, Newman was an even bigger step in the electro grunge direction.  Two synths, guitar, bass, and heavy drumming gave background to clear but powerful vocals.  Atmospheric sounds were delicately placed in between heavy rock drums and bass.  Although the height of his fame was reached in the 80’s, Gary still had it going on, winning over an audience made up primarily of kids who probably weren’t alive during his hey day.

I only got to catch the first song from Godspeed you, but it was almost 20 mins long, so that wasn’t really my fault.  A distorted upright bass and violin started a spacey drone that went on for nearly ten minutes.  Right as I was about to fall asleep a hammer dulcimer, bass, guitar, and drums  kicked in and roused me and the rest of the crowd out of our daze.  This set was extremely experimental, think The Beatle’s acid phase but like on E.  Towards the end of the marathon track the drums grew heavier and heavier and a solid beat finally dropped. This was also the point where I had to run off to Animal Collective, but I’m really curious to see where they would have gone with that, honest… 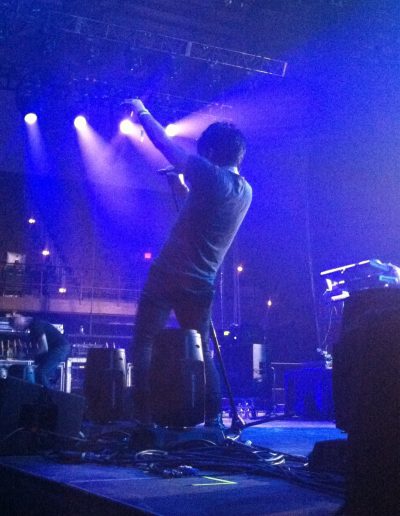 Another band on the outskirts of the EDM card, another massive crowd.   Animal Collective’s spacey-new-aged-electro style coaxed out a plethora of Asheville heads who seemed relieved that there was some non-typical thizz music on the bill.  The set was full on psychedelic, the music, the set design, all of it was well trippy and a nice reprieve from the flash and bass that prevailed throughout the rest of the festival. 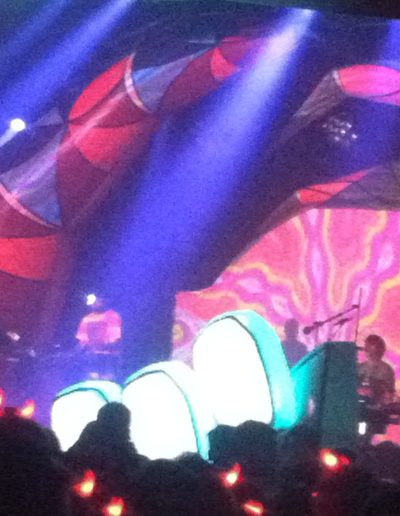 NIN had a light show that reminded me of the movie “Spinal Tap.”  Cubical beams of light highlighted each member of the band as they played a nice combo of slow grunge ballads tinged with almost a touch of punk.  Heavy drums and bass elated a crowd that was definitely excited to get some NIN in Asheville.  Here the audience was a mix of kids who looked like they had no idea what a NIN was, and non-kids who looked like they remembered coming home from middle school and catching NIN on an MTV countdown during grunge’s glory days.  You know, back when MTV played Beavis and Butthead, and yeah, music.

Another show where the bass was so heavy that it made my stomach vibrate.  This wasn’t so much a concert as it was a giant dance party.  The lights were killer (a standard theme throughout the weekend), here they were a large white outline of a face whose lips moved to sing along with the songs. Jesse Ware joined Disclosure on stage for two songs, a big time crowd pleaser.

A drum kit, a piano, and horns separated this performance from a simple dj set.  The lights of course lived up to the name, in fact, they were gorgeous.  It was the last bit of flash that I caught at Mountain Oasis.  The intensity of each and every show took a welcomed tole on my body and my mind.  The only remedy for which was sleep and to not stare at flashing colors for at least twenty four hours. 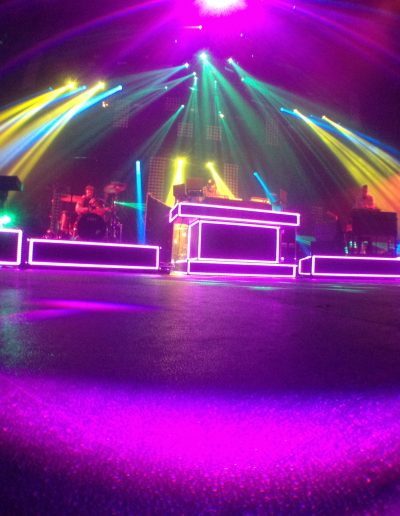 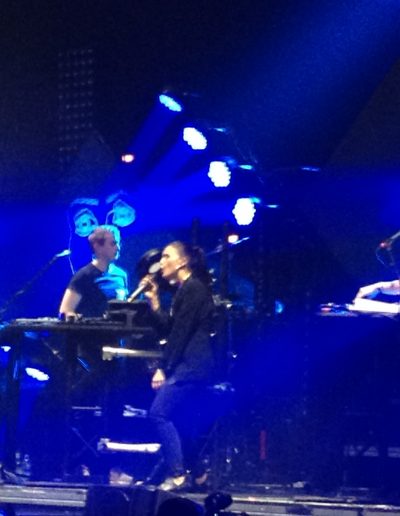 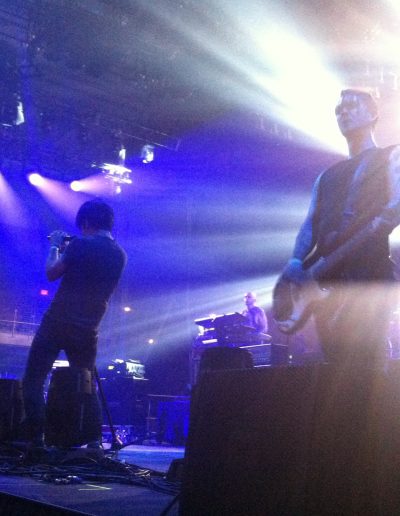 Max Witt is a student in the music program at The University of North Carolina at Asheville.  He is also one of the top ranked catering waters in the Southeast Region.  The image to the left is not Max, but rather the first picture that comes up in Google image search when you put in his name.  However, The real Max Witt doesn’t look half as awesome as the old dude in the photo, so we went with the old dude.