Moogfest, the root of which rhymes with “rogue”, is the namesake of an iconic character in electronic music.  Bob Moog considered himself an engineer, and it is to his credit that we may tweak the nobs on our cheap Casio synths, enjoy a deep dark drone track, or snicker at the nostalgic sounds of the Star Trek theme song.  When I stepped foot from the small plane in Asheville for this past weekend’s music festival, the vibe was different from the town in which I was raised.  It was pubescent, dressed as the walking dead, a huge rabbit, or Mario the plumber, all with ample LED trimming.  It was in a sense, the Asheville you’d always wanted. 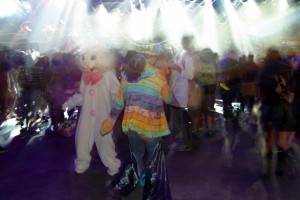 This year there were lots of good acts.  Lots.  And they were rather frontloaded. Bear in Heaven set things off at Thomas Wolfe.  Their sound pulsed through the auditorium like blood through the veins of earlybirds dancing on their seats.  With Jon Philpot’s stylized vocals accompanied by a pounding electric drumset they sounded like they were from Brooklyn. We interviewed these dudes earlier in the day so it was great to see them on the big stage! 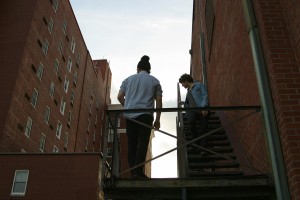 Simultaneously Killer Mike was performing at the Orange Peel, so we had to dip. Killer Mike was big.  Literally he is a very large dude, with a full, stentorian southern sound. He spit some old joints which were excellent, including “Never Scared”, and “Ready, Set, Go” from Pl3dge. Then El-P came on, who produced his most recent record R.A.P. Music, and oh how they ripped. After this show was scarcely over we ran back to the Explore Asheville Arena (surely there is a better name for this venue) to see Nas. Now the last time I saw Nas was in 2010 at Brown University in Rhode Island.  He was not exactly pumped to do this Ivy League show, though he did ask some engaging questions of the crowd including, “Who’s your favorite philosopher?” and “How many African philosopher’s y’all know?” This round at MoogFest however, Nas had a full band backing him and was most certainly in his rap zone and not his anglo-centric grill-zone. He played some standbys from Illmatic, “N.Y. State of Mind”, “Represent”, then tossed in several new joints from Life Is Good, like “Bye Baby” and “Daughters” (one of my personal fav’s). And while he put on a great performance (even if lacking a chain), the scale of the arena and the sound inside the echoe-ridden complex made the show much less accessible than the smaller acts of the weekend. Thus we ran back to the Orange Peel to see El-P perform his own set. Stepping through the backdoor past another costumed bouncer I could hear El-P saying “now you should pump this shit, like they do in the future!” A standout track on his new record Cancer for Cure. (If you like that track peep “Drones Over BKLYN” one he did for Adult Swim). He had a good engaging set, and had props for A-town which I always appreciate.. 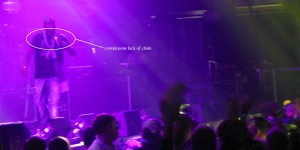 After all this rap we had to break out and hear some guitars. This brought us to Diana Wortham for the Ahleuchatistas. We had interviewed these dudes earlier in the day, so I was stoked to see them perform.  The last time I saw them play was at least five years ago and I was excited to see what they had been up to since. Turns out they have been SHREDDING! There new record Heads Full of Poison is pretty sick, and seeing them do it live was spellbinding. As my friend Mark Rice (who used to drum for Magnolia Electric Co.) said, “they remind me of a quieter Lightning Bolt arguing with Hella over a loop pedal in the middle of an epic Doors jam”. Absolutely the best show of the weekend. And these dudes are some local cats! 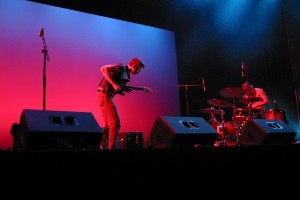 GZA closed things out for a latenight session at the Orange Peel, doing Liquid Swords cover to cover. It was cool to put a face and character with the sound, but in general GZA seemed tired. Indeed his show didn’t start until 1am, so I’ll give him the benefit of the doubt. 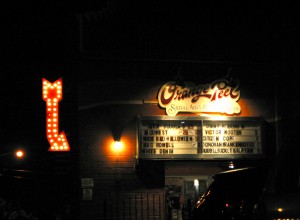 Saturday was another round of nonstop raw shit. The Magnetic Fields set things off. Another band I had not seen live, they came correct with cello, melodica, piano, banjo, and ukele, running through songs from 69 Lovesongs, the Book of Love, and their newest record Love at the Bottom of the Sea. “Andrew In Drag” was hilarious! And a standout track on their newest release.

Santigold kept the party going at the Arena with a fucking RAD show. This was the first time I had seen her live, and I was thoroughly impressed. She killed it with a pair of fly dancers, glowing costumes, and an enviable stage presence. I’d say she was right behind Ahleuchatistas for best in show.

Next we slowed things down with another set not lacking in ambiance at the Diana Wortham Theater. Tim Hecker and Daniel Lopatin composed a suite of arching and atmospheric pieces which kept our interest until the buzz ran low. Whereupon we ran back to Thomas Wolfe for FourTet. Now here is a dude whose music I have listened to with some regularity since college. Yet again, this was my first time seeing him live. And while the performance was fun, and he knew how to make people really pine for a beat, it seemed tailored more to a nightclub in London than to an electronic music festival in A-town. It sounded like a techno set.

So this weekend I learned how to pronounce Moog (mohg’), what a true ripper Killer Mike is, how Nas can kick it even without a chain, how good Santigold dances, how fucking amazing Ahleuchatistas are live, how El-P is exactly the same onstage as he is in the Full Retard video, and how an annual music festival continues to knocks the dust from the theaters of your childhood. 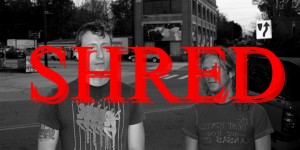