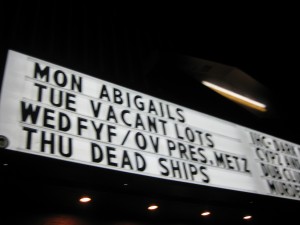 DAYUM. That is how I will start this recant of the Metz show that I caught at The Echo in Los Angeles last night.

I wanted to see if the post-CMJ-hype was legit. Since Echo park is kind of a hike for me I brought my geologist friend as a failsafe plan. Because having a geologist around will always lighten the mood. As it turned out, I did not need him. 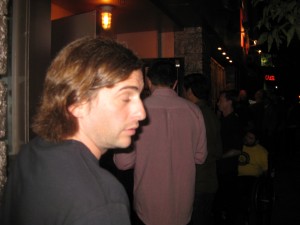 Look at that geologist, doesn’t he look like a good time?

We showed up in the middle of the Batwings Catwings set. The room was semi-full, semi-enthused. The lead singer reminded me of Tia Carrere in Wayne’s world. Wayne’s chick who sings in the band…if you don’t know, you are probably way young, so stream that on a I-Pad, learn something.

They were pretty tight. Home-girl had edge. She screamed hard, and bounced around with affect. I give it a punk-rock salute. The geologist dug it too, and he’s an OG punker. He said “she’s hot,” which meant he dug it. 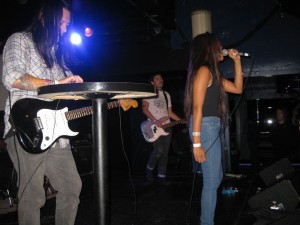 So then Metz came on, and the music-blog reading-crowd came out of the woodwork, or rather, in from the smoking porch where they had just butted their American Spirits. Anyways, holy-yell-a-lot, Metz was legit.
We had speculated earlier in the night on whether or not there would be a mosh-pit. I assumed given the geographical location that there might be a rocking-back-and-forth-from-one-leg-to-another-pit, but I was wrong. Metz handles biznass. 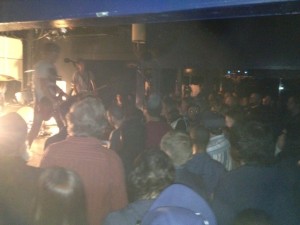 The drummer was ridiculously good. I mean, dude was loud, dude was, BANG BANG BANG, and dude was sick. It was a strong musical backbone, made your head shake. Then on top of that you’ve got quick-ass guitar blended with quick-ass bass, and a lead singer who is sweating buckets and screaming his face off, jumping on the drums and like I said, dayum! 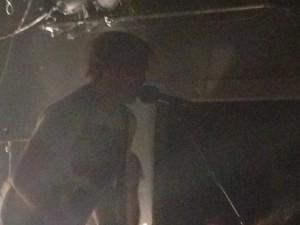 It was a twenty-five, thirty minute set, quick and raging, like the tunes. I figured if they played any longer the singer might have passed out. Which is to say, I dug every minute of it. 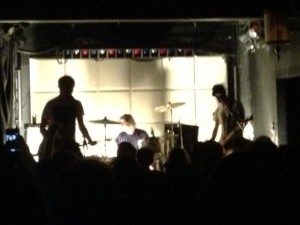 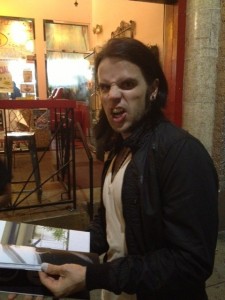 That’s Dave’s post-Metz face. It wore off in the morning.