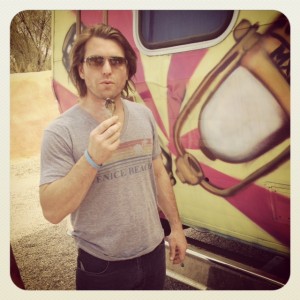 Our very own Perfect Hippie blowing on sage… Doesn’t get much headier, but this list has a few things that are right up there.

Really, the only list that matters. What in our humble opinions were the headiest musical goings down in the year 2012. Albeit, this is a hard collection, I stretched it into fifteen, because man, we keep it heady around here. If I forgot something, please, fill us in, there’s never too much on a most heady list. Ever.

15) Justin Townes Earle’s release of Nothing’s Gonna Change the Way You Feel About Me Now cemented the arrival of the heir to one of the guitar’s long revered champions. Steve Earle’s kid got real up in this 2012 son! Sorry, I watched a lot of Bad Girls Club before I wrote this and they talk about being real a lot.

14) Black Hippie happened – You don’t have to be a hippie to be heady, but you do have to be heady to be a hippie. These dudes “emerged” if you will, this year, and although they didn’t drop a group album, their solo debuts were all heady as fugh, and they mixed hippie culture with that urban street music the kids are listening to, and it’s tight. You know, they rap heady stuff about like being from LA and passing the cronique’, you know “323 shit.”

13) Dr. John got in the studio with Dan Auerbach and did some throwback-ish with Locked Down – Legendary heads get respect on the list. That’s how it goes when you’ve paid your dues. It doesn’t hurt that this album was as heady as fresh patchouli either. Dr. John’s goal with this album, as it’s told, was to come at the man musically for letting his city get-got by the aftermath of Katrina. So to the man, sucks on that jive, you busta ass busta.

12) Leonard Cohen dropped an album at the young age of 78 (Old Ideas) and it’s got dirty old man talk in it – I don’t think I really need to say much more than that, but, “I’m naked and I’m filthy, both of us are guilty,” should really spell it out. Hallelujah, respect the player and the game.

11) Jimmy Cliff got his Rebirth on – With the help of Tim Armstrong from Rancid, Jimmy Cliff brought his old groove back. Fifty years since he first stepped foot into a studio, eight years since he last recorded an album, and damn if he ain’t still the man.

10) Action Bronson was just heady in general – He dropped his mix tape (Rare Chandeliers), which was dope. He consistently makes thoughtful videos and tasteful culinary creations, which is also dope. Yet, what set him apart in headiness from all the other slightly overweight emcees who are skillful with a microphone and a cutting board, was the fact that he has his own G-Pen. He’s G-Pen’s #1 hip-hop-hype-man, nuff said.

9) Jack White’s solo album debut, Blunderbuss – How do you follow up doing a collabo with the Insane Clown Posse? Which obviously, for most, would be viewed as the pinnacle in lifetime heady achievement. For Jack White however, the go to move was to go solo, get a chick band and a dude band to perform with, and drop a record that only gets a 7.8 from Pitchfork, which actually makes it way headier.

8) The Re-Emergence of Cody Chestnutt – Back in the day my boy Fat Bob was always telling me that Cody Chestnutt was the ill-na. Much to my surprise, Fat Bob was right back then, and that sentiment still holds true today. Mr. Chestnutt’s first release in ten years, Landing On A Hundred was recorded in the same Memphis studio where Al Green recorded many of his hits (see: heady). It’s a socially conscious work of art from a man who stepped out of the spotlight a decade ago to fix stuff up with his wife and raise his chilrens… So it seems “you can take the man out of the heady, but you can’t take the heady out of the man.” – Jake Cotler, 2012.

7) Neil Young made an album called Psychedelic Pill – If you are unclear as to why that statement denotes something very heady, go listen to the album’s 27 minute opening track, “Drifting Back” and you’ll probably get it.

6) Bob Dylan’s Tempest comes out 50 years after his debut – Legends are like fine wine, they only get headier with time. This is clearly evidenced by the crew that Dylan rolls with in the “Duquesne Whistle” video (below).

5) Warren Haynes’ Christmas Jam goes live – It was nice turning on the TV and seeing all the Asheville, NC hippies dancing in HD. The lineup was pretty killer too, but the fact that Warren is mainstreaming it on the boob tube is a true heads victory.

4) Gary Clark Jr. makes the scene big time – Who wasn’t this man on stage with this year? Game respects game, so they tell me, and everyone in the game respected GCJ and his album Blak and Blu in 2012. Bonus points because he taught me how to open a beer bottle with a cigarette lighter at Bonnaroo this year. I have since forgotten how, but that’s besides the point.

3) The Rolling Stones put on their spanx and hugged it out – Don’t hate cause you ain’t got moves like Jagger. If you were as cool as them you’d rock out with your shirt off when you were seventy as well.

2) November 6, 2012 happened – A heady day on so many levels. I’m pretty sure much of the music world (Nikki Minaj and Hank Williams Jr. excluded) breathed a heavy sigh of relief this day. An even heavier one in Washington and Colorado.

1) Phish on Tour/at Bonnaroo – Look here, it’s my list, and I’m a do what I want, and I’ll be damned if any of y’all can deny the fact that in any given year, if Phish is touring, they are not the headiest thing going down that year. I’ll put it this way, at Bonnaroo this year they melted faces for like four hours. They played with Kenny Rogers. Eight bagillion glow sticks were thrown. Countless amounts of unmentionables were consumed. People overdosed from spinning in the audience. I met a dude in a dress who offered me a substance called moonrocks… Yet as soon as Phish finished their encore and stepped off the stage I saw their bus pull out. They ain’t linger for the after party. They don’t give a damn about no moon rocks. They are professionals at getting heady, and that’s just how it is.