It’s Been a While, but We Went Back to an Alley in Hollywood

It’s been a long time since we’ve parked in a Hollywood back alley. The last instance that I can recall was a place called Freak City in 2011. That was a particularly filthy alley, which I ended up sleeping in that evening. I woke up and pissed in a bottle and drove back to Venice. There’s lot of memories from that night, some good, some bad, but this was not that night. This was during the day and if heald in contrast to that wild evening past we can observe the evolution of this little project of ours.

During the Freak City episode we were rolling in the old van, which was an unquestionable piece of shit. We didn’t have solar power, so we had to run long extension chords throughout the piss-covered alley and into this strange venue that was owned by an equally strange man, who was neither friendly nor hospitable. On this most recent occasion we were hosted by the very hospitable Red Bull Records, and we had no need to run any cables, because we run off of solar power now, so had there been piss in the alley, we wouldn’t have had to drag our chords through it. That being said, there was no piss in the alley. In fact it was a pretty clean alley, as far as alleys go. 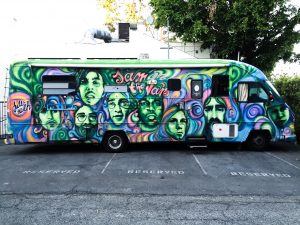 The most beautiful alley in all of Hollyweird…

The Freak City shoot took place at night, and there were a lot of weirdos there. This latest alley occurence started unhealthily early at 8AM. There weren’t any weirdos aside from Spud hanging out, and much to the contrary the only folks standing around watching the sessions were record executives and entertainment industry types. It seems we’ve gentrified to a certain extent. Much like my feelings towards the neighborhood I live in gentrifying, this is both a blessing and a curse.

Perhaps the only similarity in the two alley shoots at question here is that both instances saw us filming the likes of some very talented individuals, that’s been a constant since we began. We only film good music. We’ll only concern ourselves with the new bands here.

First to go was Sara Watkins and Sean Watkins of Nickel Creek fame. Sara brought her fiddle and her brother brought his guitar and they gave us four folk songs, halving the difference in terms of who took the lead. We’ll call it two sessions, but it’s clear these siblings are musically entwined, even if we’re bililng them separately. 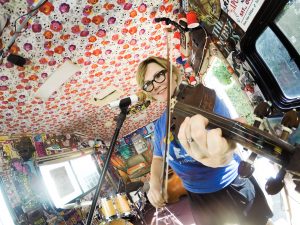 Fiddle me this Ms. Watkins… 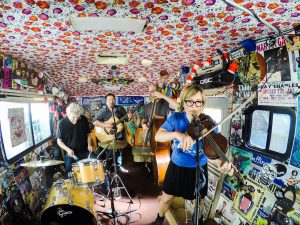 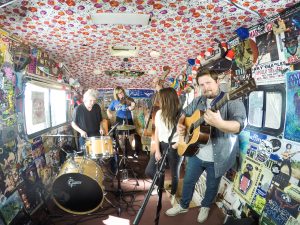 Next up was a duo from Boston that go by the name Aer. They went very simple, a guitar and two mics. Simple can be rather nice on a sunny day, even in an alley. 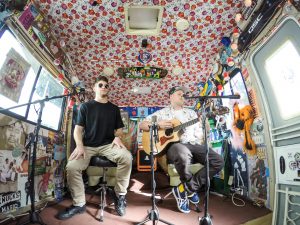 Aer was followed by a band named New Beat Fund. The two groups had been on tour with one another previously, however, in the smallest of small-world scenarios, neither group knew that the other was Jamming in the Van that day. Both groups were pleasantly surprised to encounter one another and we all celebrated by circling up in the most California of ways. If the meaning of that escapes you, well hop on a plane to Cali and take a whiff of the air, let us know what aromas you come up with. 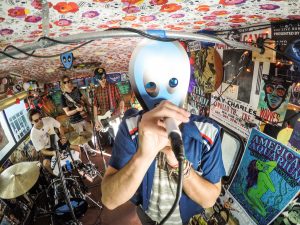 The trippy alien face is New Beat Funds “logo…” Not sure if that means they are trippy aliens, but we dig it. 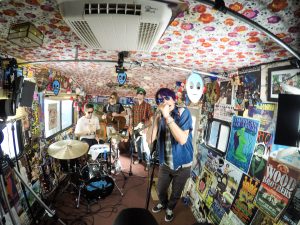 Get to know our MXL Mics. 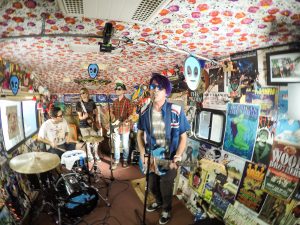 We rounded the day out with up and coming indie act, The Colourist. They’re from the OC. Yep, that OC. If you’re thinking this says something about their music, you’re incorrect. They played us a cover of The Velvet Underground’s “After Hours.” Their female vocalist, Maya, did a brilliant Nico impersonation, and as an admittedly huge Velvet Underground fan, I fully sign off on this rendition. Spud signed off too, a bit too over-enthusiastically. He kept yelling “baby girl can blow!” Which she certainly took the right way, but Jesus Spud, stop telling girls they can blow, that’s not a good look. At any rate, that track is going to be part of a covers project that we’re doing in collaboration with Universal Music to celebrate the 45th anniversary of The Velvet Underground’s self titled release, I am admittedly a bit giddy about it all. 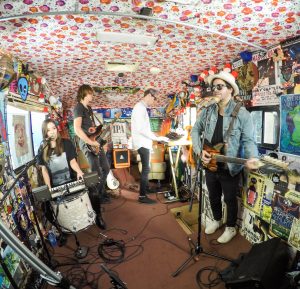 Their band name says The Colourist, their wardrobe says black and white… 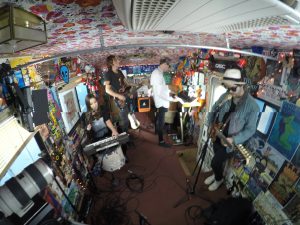 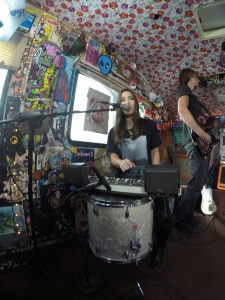 One girl one drum, albeit a big drum. 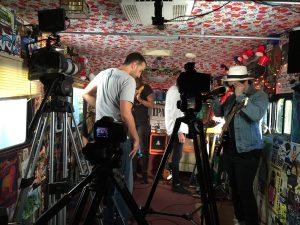 Behind the behind the scenes…

A covers projects done in collaboration with industry standards is another example of things that weren’t going down in the alley three years ago. You see, we’ve grown up quite a bit. I didn’t sleep in the alley this go around. In fact we were wrapped by 4:30 and I was back home to Venice no later than 5:30. While the older alley experience was admittedly more exciting, I’m ok with this new type of story line.