Into the Mountains – Telluride Blues & Brews Part I

Six AM is a crappy time. I can’t recall ever enjoying being up at six AM. This time was no different, and in the future I’ll reference it whenever we decide to “beat the morning traffic out of LA.” No matter the fact that we all got up and got on-board by 6:30 AM, we still didn’t get on our way until about eight thirty, which is right at the height of that mid-week LA morning commuter traffic.

Instead, we sat in a gas station parking lot waiting on a jump because the van’s battery wasn’t in the best of shape, always a good sign when starting out on a 700 mile drive into the thin air of the Rocky Mountains. So we waited, six dudes and three dogs deep at a gas station, for an hour or so. About half way through two of the dogs got a little fresh with one another and we realized that three was just too many. The pitbull did not make the cut. 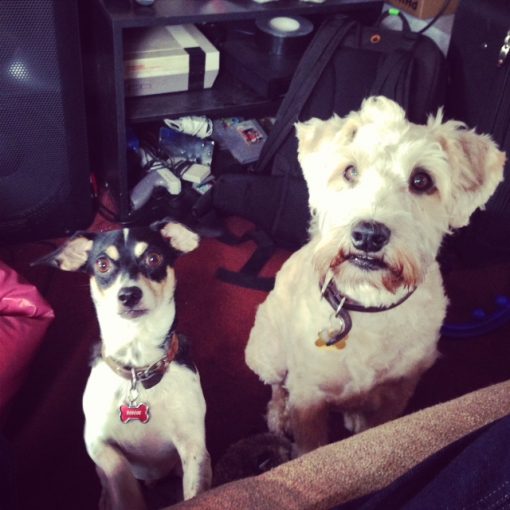 We brought double ding-bats on this trip…

We’ve worn the numbers off of our AAA card over the past two years, but they still take our calls. A little shock to the battery system and we were finally on our way.

With Spud at the helm and our usual roster of crappy movies supplemented by a bag full of candy and some Lagunitas lagers, miles began to fly by. Interspersed between the miles flying by were the countless gas station stops that Spud made, holy crap the man likes pumping gas, never lets us get below half a tank. 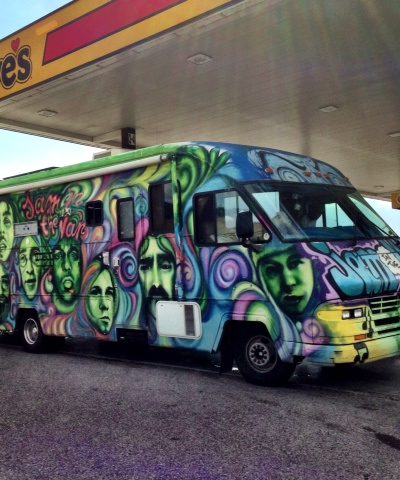 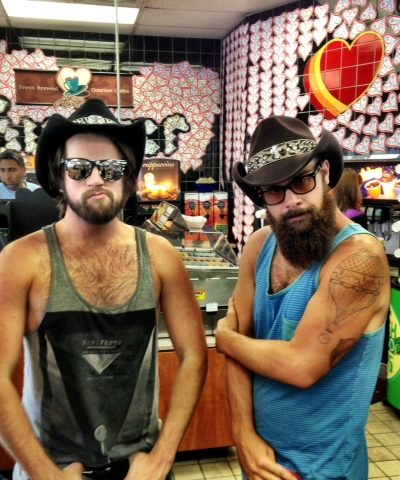 We enjoy them too, sometimes.

Gone went California, Arizona, New Mexico, then as we pushed into thursday we found ourselves in Colorado. Cortez, CO to be exact. This is where we laid our heads to rest. It was about fifty miles down the hill from our final destination, but that last stretch was steep and windy and far longer then the odometer would indicate. 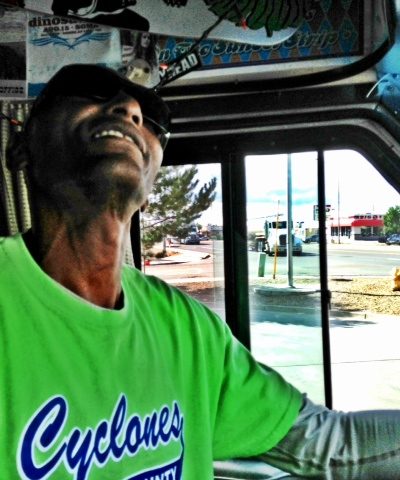 The manager of the Econolodge let us bring our two mutts inside the rooms as “service dogs,” and also said we could take a dip in the pool. Having had no real hiccups other then that early morning nonsense it seemed that all was coming up Jam Van when we shut our eyes. Of course, we never like to breathe easy around these parts. So when we awoke we had no power steering or brake pressure and were once again stuck in a gas station. This one happened to be located next to a WalMart, so we were able to buy glow sticks (find the positive in everything), but our dilemma was far more complicated then a battery jump. We needed a mechanic and we needed one that worked on Jam Vans, and we needed him in the middle of nowhere and we needed him with a bit of hustle.

Before I-Phones there was a method of getting directions and assistance that was known as “asking a human being.” We utilized this method in Cortez, CO to find a mechanic named Charlie who said he’d been working on RV’s since he was a youngin’. He rolled up in a truck with flames painted on the sides, hopped out of the cab spittin’ dip, sized up our situation and said with confidence that he could have us out of there in half an hour. One un-blocked power steering fluid line later and I was slapping some cash in Charlie’s hand with a huge grin on my face. The road can keep slinging the mud, we’ll keep dodging it. 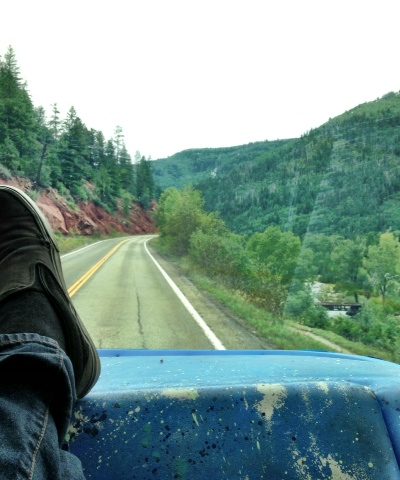 Dodge we did, for about 46 out of that last 50 miles. Then we hit some traffic, because some genius thought it was a good idea to block off the road leading into Telluride on the first day of the music festival. We sat motionless on an incline for what seemed an eternity to us. Our sound guy pissed in two bottles if that gives any indicator of how long we lingered. The van must have gotten just as perturbed, because as the cars in front of us began to roll forward and we followed suit, we heard an exclamation from Spud, felt a strange vibration from the van, and were jerked rudely to a halt.

Of course if you’d been following the news that week you would have seen that Colorado was besieged by torrential rain storms the likes of which the state was in no way prepared for. We had been lucky up to this point and had for the most part avoided the areas where precipitation was heavy. Key phrase “up to this point.” Because as soon as we were stranded on the side of that hill blocking half of the road the sky opened up and the rain she came pourin’ down… 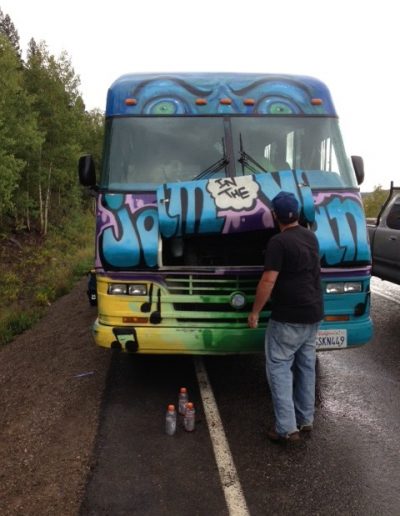 Our not happy place…

Our boy Dove Yeaman (AKA Kings of Leon) was itchin’ to hitch hike, so we let him hop a ride with a dude in a Ford Explorer and they rode down the hill to a gas station that we could literally see from above. Five minutes later they were back with a can of brake fluid, and Spud was under the front tire trying to pour it in the ridiculously hard to reach fluid well.

When you’ve spent most of the day breaking down, you basically bank on bad luck, but the fluid thing worked, go figure. We made it to the festival about eight hours late, right as the rain was at it’s peak for the day, aka the perfect time to set up shop. Fortunately, I was the only one to lose my footing in the mud. Legs went up, butt went down, mud went splat. So I let out a scream of frustration, it had been a long day, I hadn’t eaten yet, my patience for falling in a puddle was pretty thin at the time, but that would truthfully be the last time I felt anything close to frustrated for the next four days. 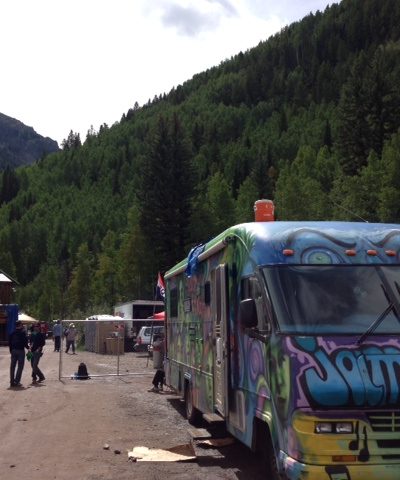 Once we got settled and fed we took a midnight ride up the gondola, looked down over the lights of Telluride and something flipped, we were back in the thick of another adventure and there was about to be music, a whole lot of music… 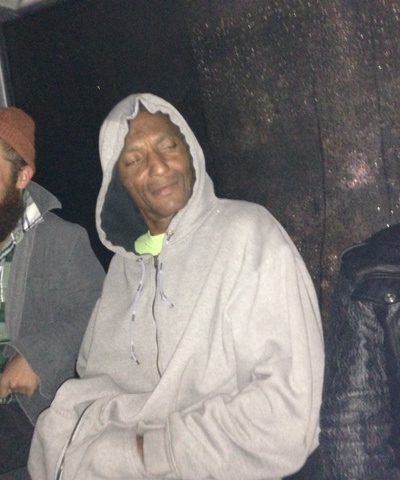 Don’t miss parts II and III of this most epic saga, when we rendezvous with the likes of Gary Clark Jr., ZZ Ward, Rebirth Brass Band, Mickey Hart, and oh so much more, at Telluride Blues and Brews!