Into the Mountains – Telluride Blues and Brews Part IV

All good things gotta end right?  So we arose Sunday morning with a bit of a heavy stone in our guts.  The beautiful views, the kind people, that crisp Colorado air that smelled of all the natural greatness that surrounded us, it was all going to be in our back pages soon enough.  We were going to have to pack up our gear and head back to the smog and bustle of Los Angeles.  Not that we don’t love our home, we fully dig where we reside.  It’s just that when you get a taste of somewhere as nice as Telluride was, you want to let that taste linger for as long as you can. 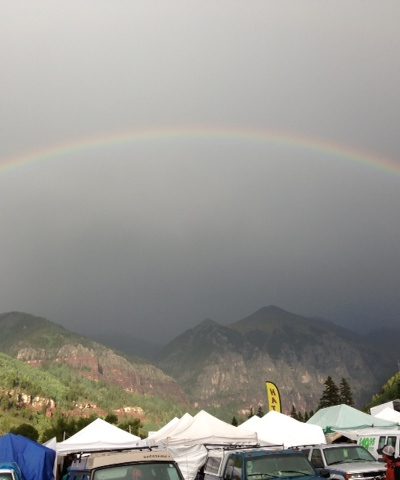 Rainbows are for the heads.

So we got an early start on our final day, meeting up with Preservation Hall Jazz Band for a morning Yurt Session. This band is as iconic as the logos on their bass drum and tuba. While they are in actuality a much larger grouping of musicians we were able to fit four into the Yurt, and four was all they needed to make that sturdy structure sway with cool.  You don’t gotta be young to be hip to the groove, you can do it at any age, and sometimes perhaps it get’s groovier with time. 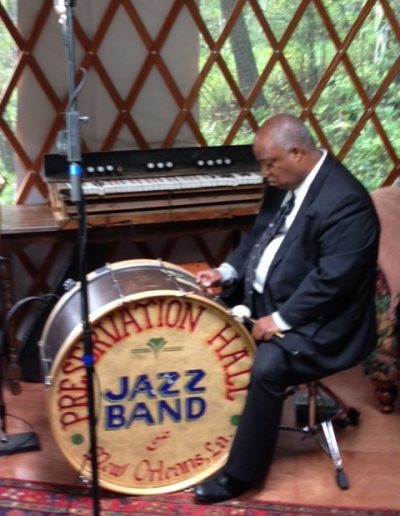 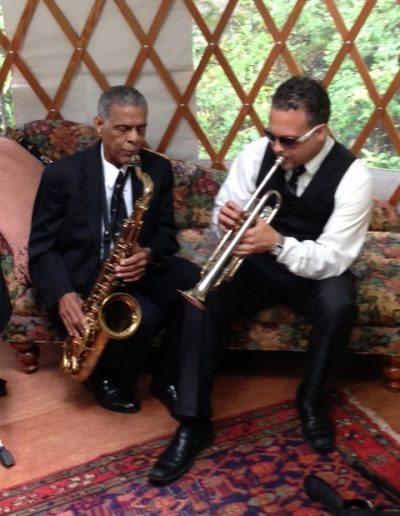 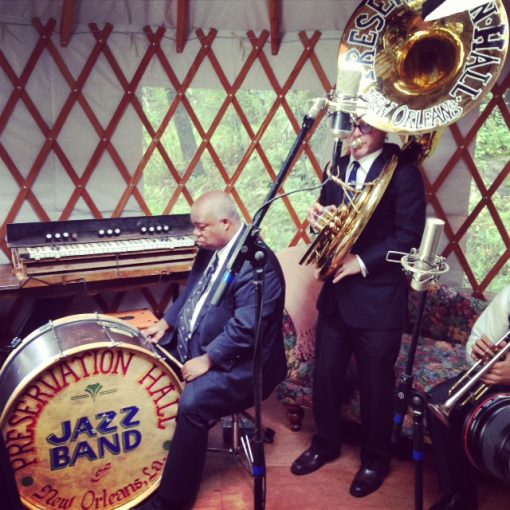 Sunday was by far the rainiest of all the days at the festival.  I was in awe of the folks who’d stuck it out and camped all three nights in the muck.  They were a testament to how great of an event Blues and Brews was.  Any happening that can keep its patrons smiling amidst massive downpours gets a tip of the hat from me.  Throughout the weekend I really didn’t come across much in the way of complaints or frowns from any of the phestival-goers.  I believe they would have come out to the head show in a blizzard. 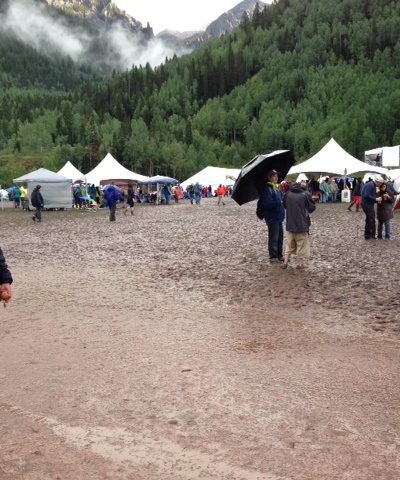 Lucky for us the van is a sheltered environment and we were able to duck in there to keep from getting soaked for most of the day in lead up to our finale.  That would be Anders Osborne making his return to the van.  We’d filmed him once before in front of his house in New Orleans, but that session featured just him and one other guitar player.   This go around he brought his entire band.

We’ll get a new clapboard when we make the first million.

You’d think with all of the places a guy like Anders goes to in any given year, all of the faces he meets and all of the spots he plays his tunes at, he’d maybe be a bit forgetful when it came to names and face recognition.  Yet he remembered each and every one of us from New Orleans, and gave us all a sincere hug. His memories of that day were just as poignant as ours. 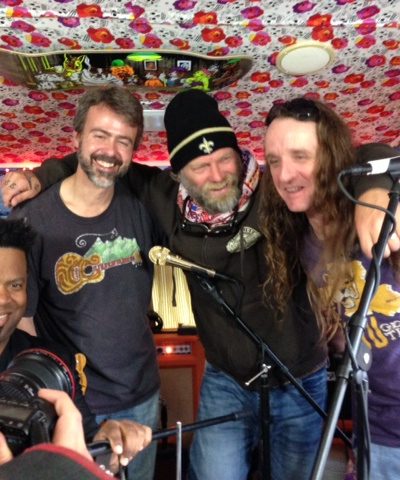 Such a nice dude.

In Telluride he and his band created some new poignant memories, complete with a couple of fart jokes in reaction to a couple of farts, which aren’t generally the best things to let fly inside of a van with about ten guys in it.  Smells aside, Anders is one of our favorite people in music.  He’s beyond genuine and interacts with an unmatchable amount of joy.  While we always have fun shooting Jam in the Van Sessions, we have a special kind of fun when Anders hops inside.  It was a terrific way to put a cap on the weekend. 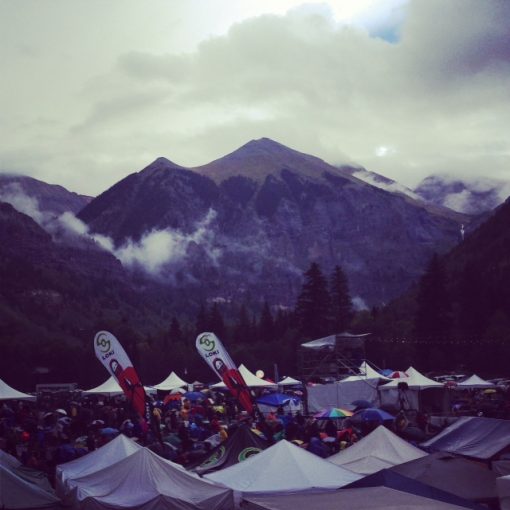 Hate to see you leave, but I love to watch you walk away.

So we closed down shop in the rain, still giddy with all that we’d created over the weekend. We traipsed back to our dwellings with a solid feeling of contentment.  We’d made it into the mountains and we’d be coming back down from them with a whole new feeling of fulfillment.  Yet it wasn’t the things that we’d just accomplished that we were most excited about.  It was the fact that we’d accomplished them, and so we know that we can accomplish a whole lot more.  In that, we weren’t too sad to split town that Monday morning.  We’ll be back.

The road ahead is going to be long, long and heady, and we’re going to make sure that our brakes and power steering are up and running at all times, so that we don’t miss a single damn moment.  See you around the next bend, whoever you may be. 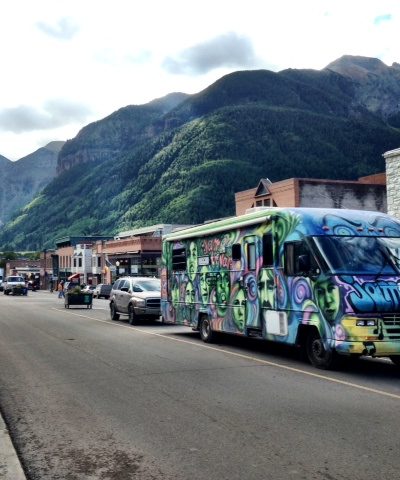 On the streets of T-Ride… 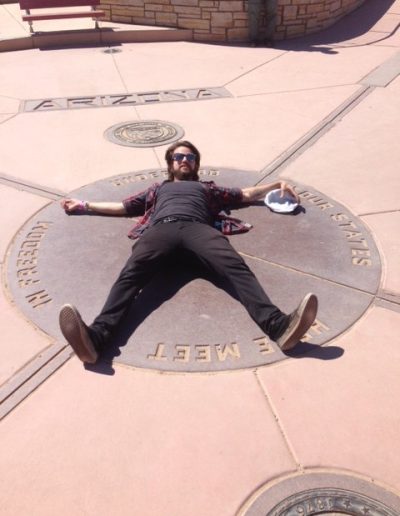 Oh my god is that Kings of Leon at the 4 Corners? 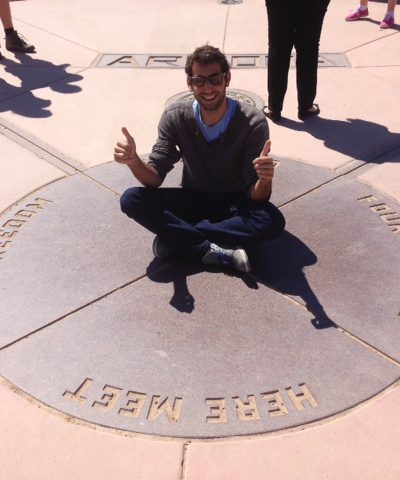