Into the Mountains – Telluride Blues and Brews Part III

When day three of this journey began we were already playing with house money.  We’d had Gary Clark Jr. Jam in the Van, we’d accomplished a long standing dream of ours, and so the trip was already a great success and we still had two entire days of filming ahead of us.

Saturday morning we found ourselves back in the Paste Magazine Yurt.  The rain was coming down again and our morning performers had some pretty big instrument cases to shelter from the wet.

I suppose the thin Colorado air may take it’s hardest toll on newcomers to the atmosphere in the mornings.  Because like ZZ Ward before them, the Rebirth Brass Band dudes did not seem fully excited about playing music in our cozy little yurt.  Perhaps it was the rain, perhaps they were jet-lagged, but regardless, they were as professional as musicians get, and they properly funked through their set without a sign of the morning blues making an appearance on camera. 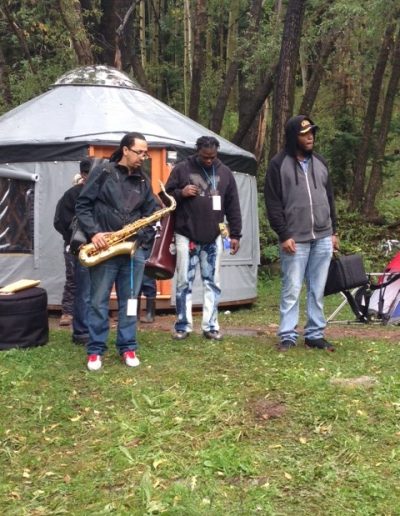 Afterwards it seemed that we might just not have known how to speak their language.  Because Spud got to rappin’ with the Rebirth fellas in that type of speak that you figure only Spud knows what the hell he’s talking about, and the Rebirth gents perked right up and appeared to be quite fluid in Spud jargon.  I’d say that it was ebonics, but it wasn’t.  I can speak that.  This was something entirely different, but I’m pretty sure the gist of it was that Spud wanted a lady friend with a big-butt to have been standing there with him while he was grooving to the Rebirth Yurt Session.  He also said some crap about the Dallas Cowboys, his team, but talking sports with Spud is a whole other Pandora’s Box that I’m not even going to touch on here.  Or ever if I can help it…

We got a little recess after Rebirth to wander around the festival and around town.  They were having a beer tasting as part of the show that day and about 50 craft breweries set up shop in the center of the grounds and poured samples of their brews for the ten thousand folks in attendance.  I’d never seen something like that at a festival before.  I dug it and was also pretty dumbfounded by folks’ appreciation of free booze.  No rain, lightning, tornado, or other natural event was keeping these heads from their suds. They lined up deep to get those glasses full, and I guess the drunker you get the dryer you feel, because the rain didn’t phase them one bit.

Otis Taylor and his crew rolled over to the van at around 4PM.  Otis is kind of a mountain of a man.  He walks in the room and your eyes are on him, because he just commands them.  It’s not that he’s loud or flamboyant or overbearing, it’s just that he’s an impressive man and you can tell he plays the game by his rules.  Also impressive is his music and his flashy band.  Oh, and his awesome OT signature which he was kind enough to tattoo the van with.  At this point our autograph wall is getting pretty awesome.  We’ll sell it to the first bidder who ponies up a cool million.  Send that check and she’s yours. 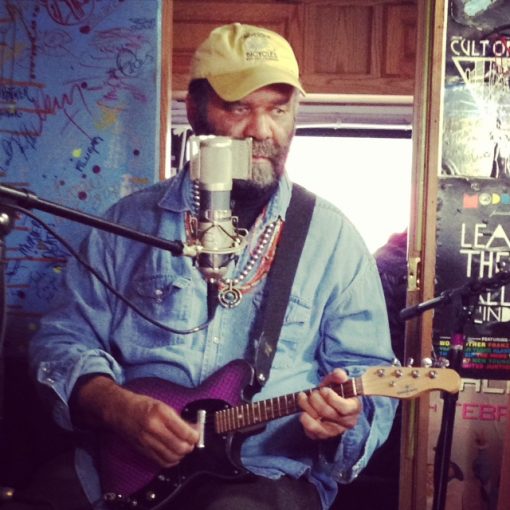 Otis on the inside… 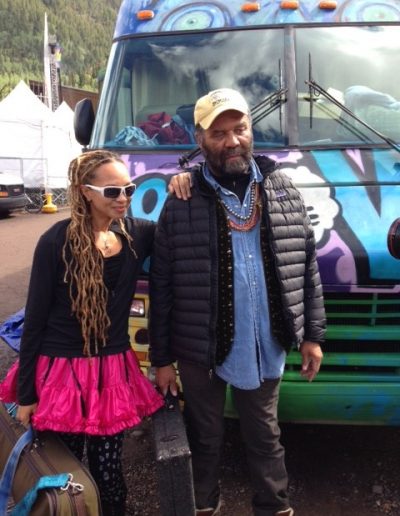 Otis on the outside.

After Otis cleared out his gear we had yet another all time great moment for the Van.  We were visited by head-royalty, Mickey Hart, when the former Grateful Dead drummer came by to sit down in Cuz’s Corner with Spud.  We have Jerry painted on the side of our van, he’s the only artist that was on the first Jam Van and the second Jam Van.  Needless to say, we are Dead heads and this was a jaw dropping moment.

One heck of a memory.

Spud and Mickey got to it before the cameras started rolling.  They chatted like they’d known one another for thirty years.  With topics ranging from acid trips in the desert, to brain waves, to Spud telling Mickey that “through rhythm, you are the blackest white guy I know,” there was not a dry eye in the van at the end of the interview, and that was because we were laughing hard enough to cry.  At one point they were both jumping around yelling “we dancing, we dancing, we dancing,” at which point I had to pinch myself and verify that I was not tripping. 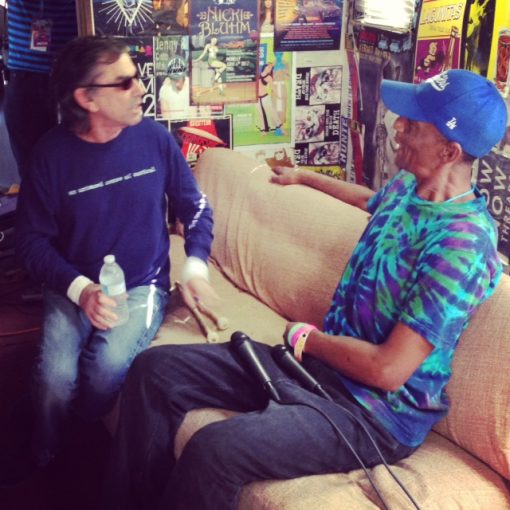 We needed another break to catch our breath and gather ourselves after Mickey Hart.  So we took another ride up the gondola, this time during the day so that we could dig on some of the views and get some non-warped perspective. 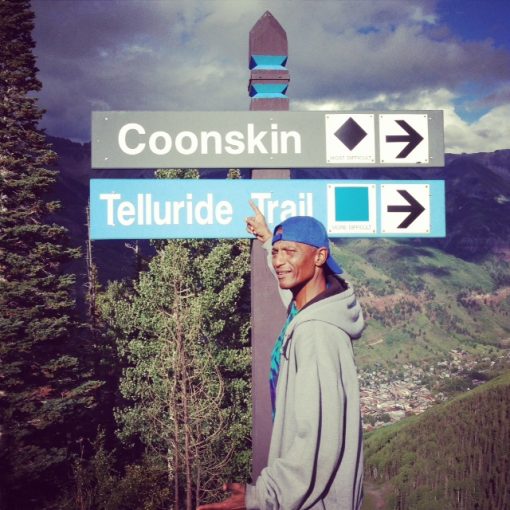 When you’re looking at waterfalls and rainbows from 10K feet above see level there’s only one way to describe it, spectacular.  Nobody fell off the mountain, and we returned right on time to capture our last act of the day, Kim Churchill.

Kim reminds of Xavier Rudd, an Australian fella who plays a mess of instruments at once and is one with his mother earth.  He was seen all weekend trouncing around the grounds with no shoes on, mud growing on him like lichen on a stone.  He’s a world wanderer, and he stumbled into our van with a guitar and a big smile and won us over with his friendliness, then he hugged us farewell and wandered back into the mud. 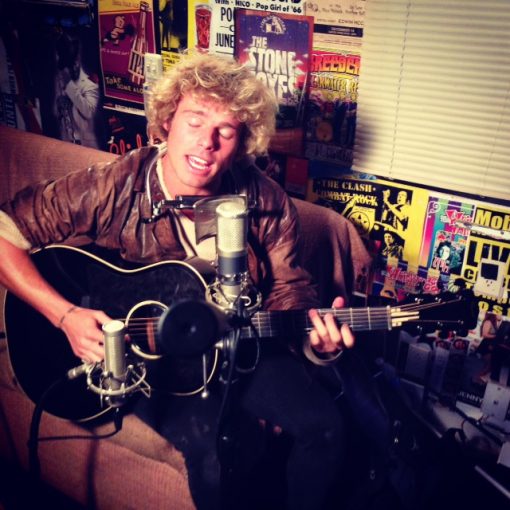 For our evening events we took back to the Telluride streets.  This time sans Spud who claimed he wanted to “rest up,” but I’m pretty sure I scared him off with all the glow sticks we brought out.  You see, Spud hasn’t yet warmed up to our love of all things that glow.  We’ll get him though.  One of these journal entries is going to have a picture of him covered from head to toe in neon glow. For now, he just shakes his head at me in mock-disgust.  Can’t win them all. 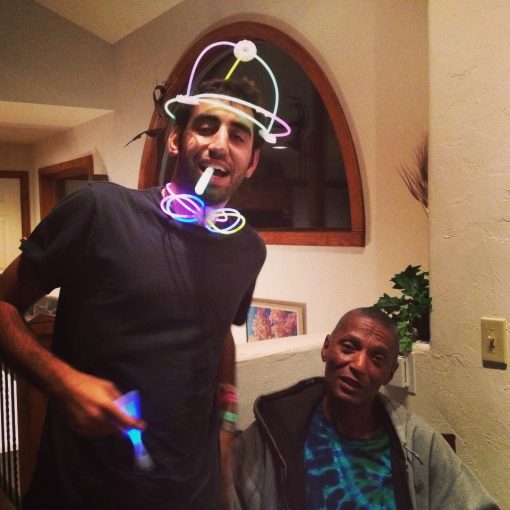 Saturday being the typical phestival marquee night we were forced to make some tough decisions as to who we were going to see for the late night acts.  In the end we went for another ride up the gondola to check out Preservation Hall Jazz Band with special guests Jim James and Karl Denson.  You call it a win when you’re ten thousand feet above sea level watching Jim James smash a microphone stand into the ground with emotion while one of the best jazz bands in the world backs him up.

Some chicks at the show begged me for the glow-tie that I was wearing, they said that they “needed it,” and I am not one to keep someone from something that glows if they need it, so I obliged.  Pay it forward right? Right Spud?! 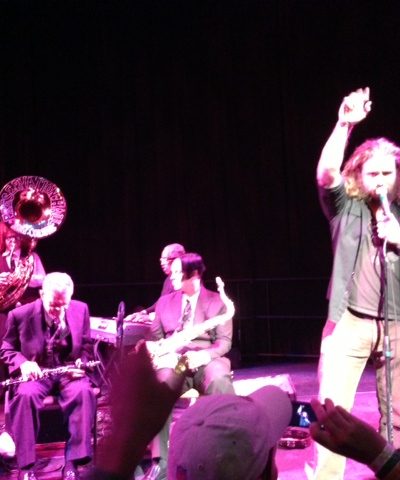 We then rode back down the gondola and walked over to the Telluride Opera House where we caught Anders’ Osborne’s performance that went into the wee hours of the morning.  At one point Jim James appeared in the audience and we forced ourselves to stay awake through all of the encores in the hopes that he’d make his third performance of the night (he’d played the fest’s main stage earlier that day as well).  Alass, he did not, but the hell if it mattered.  Anders Osborne is one of the best guitar players walking on this earth today, and he gave a big old taste of his skills that evening.  Jumping back and forth from old to new material, it sent us to sleep very anxious, because we were seeing him in the van the following day, and if that’s not something to dream about, well I don’t know what is, and so I will end this day’s recant on that somewhat cheesy, but ever truthful statement. 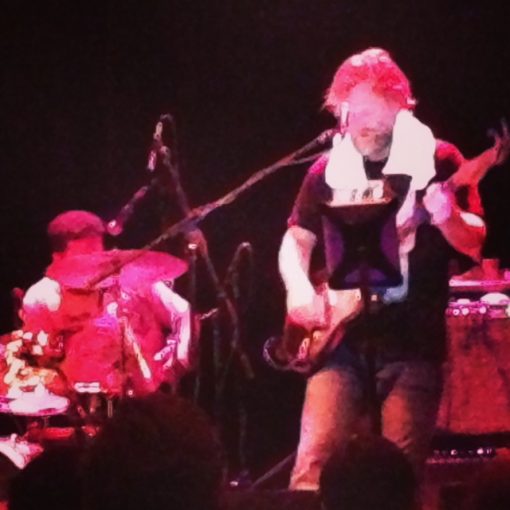 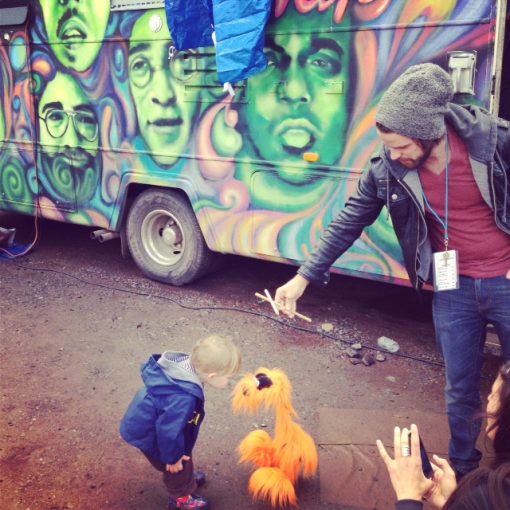 In closing, Jam in the Van is for the children.