Into the Mountains – Telluride Blues and Brews Part II

So I shared a bed with Spud.  It was a king sized, which left plenty of room for the dog to curl up in between us and our feets never came close to touching, but you know, waking up to Spud in his long johns is still an interesting start to a morning. 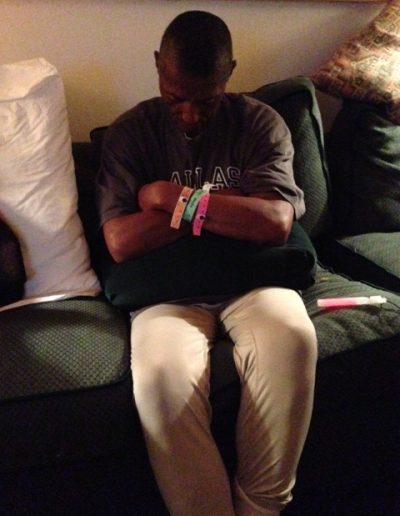 He gets up real early though and likes to go check on the van, tidy up and have a little coffee before he sneaks back to the condo to catch up on CNN.  The man loves to stay current.  So he kept me constantly abreast of the flooding situation that seemed to be occurring everywhere in Colorado except for where we were at.  Not that  it wasn’t raining, it certainly was, there just wasn’t any flooding, only muddy puddles (muddles) peppered with the occasional rainbow.  I believe two members of our crew brought boots with them on the trip, I was not one of them, so fare the well grey Jordan 1’s… 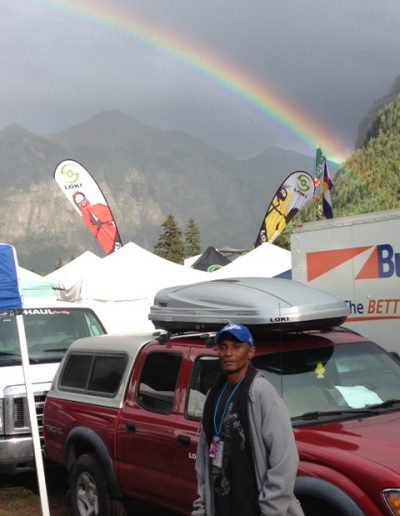 The photographer did not say “Spud, act hard in front of this rainbow.”

As is usually the case with our presence at a festival, once it’s on, it’s on, and it tends not to do much in the way of slowing down until it’s a wrap.  Our day on site began in a yurt, which is a Mongolian tent of sorts. This one happened to be built by a company called Colorado Yurt, which is clearly not located in Mongolia.  It was commissioned by the folks over at Paste Magazine, whom we worked with for Telluride Blues and Brews.  The idea was one very similar to Jam in the Van.  Meet up with bands in a yurt, have them play intimate sessions on camera to live forever on the YouTubes, party like you ain’t got pants on.

First up was Ms. ZZ Ward and her accompanying guitarist.  Two guitars one yurt and you’ve got a sweet, sweet thing going on… ZZ seemed a bit out of it at first, by which I mean she didn’t seem as thrilled as we were to be in the yurt together.  She soon explained that the altitude was messing with her and causing her head to throb with pain.  I, being the chivalrous gentleman that I am decided to go and fetch her some Advil.  This required a short jog over to the first aid tent.  After which I was quite sympathetic towards ZZ’s plight, as my panting surely indicated.  That air is thin, and it don’t matter how prepared for it you think you are, it sneaks up on you. 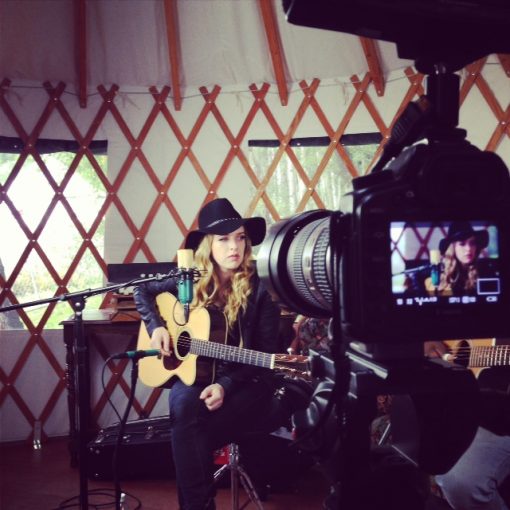 In fact, they were giving musicians oxygen tanks in their tour busses. We didn’t get one in the van, although I’m putting that on the rider for next year.  ZZ recovered from her headache quite nicely, the videos will attest to that.

From there we moved onto the festival’s stage to take in Bright Light Social Hour.  They’re a five piece from Austin, TX who openly mention that they like to genre-jump in their music.  They ain’t lying, as they touch a little bit of everything in their set.  I’d call them rock and roll musicians though, not just based on their long-ass hair either.  They ripped it up pretty good, shreddy type shit, you know…  The weather was perfect for their set and we were standing next to The Black Crowes’ gear cases for the performance, so something felt pretty right about all a that. 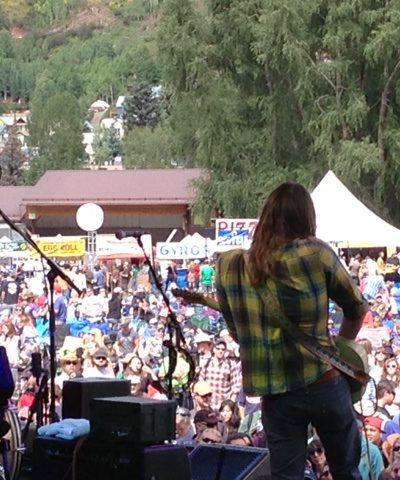 View from the back… 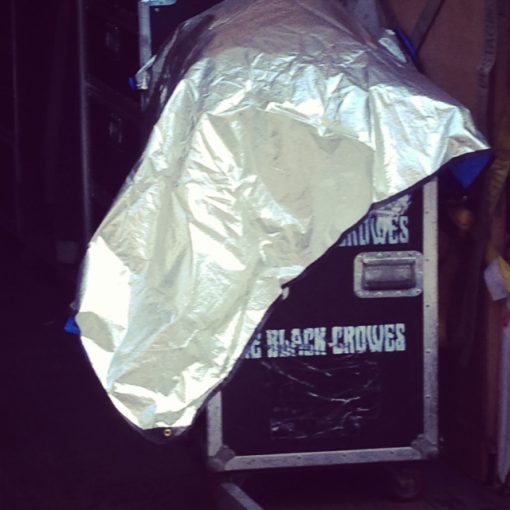 The shit them boxes have seen…

Thirty minutes after the set wrapped up we’d find ourselves even closer to the gents of Bright Light Social Hour.  They were first up in the Van, where they took the volume down a notch, laid down three terrific numbers, and drank a few more then several beers. Them’s is some Texas boys. 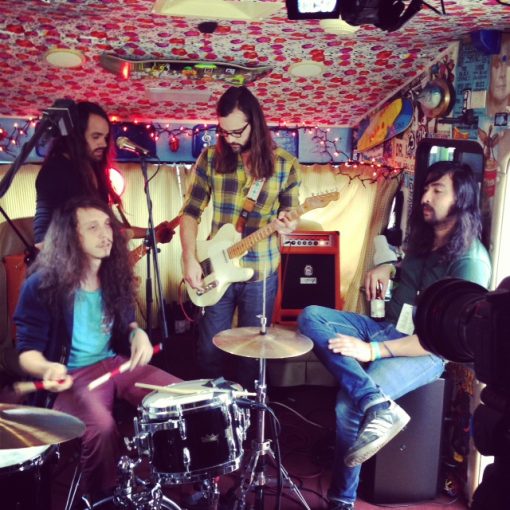 It was back to the main stage from there, where we caught Jam in the Van veteran Allen Stone’s set.  Spud is a huge Allen Stone fan, ever since he said “that ain’t no white boy singin’” at High Sierra Music Festival.  So he inched as close to the performance as he could get, shaking his hands up to the sky, trying to catch a little bit of the soul that Allen was sprinkling down on the crowd. 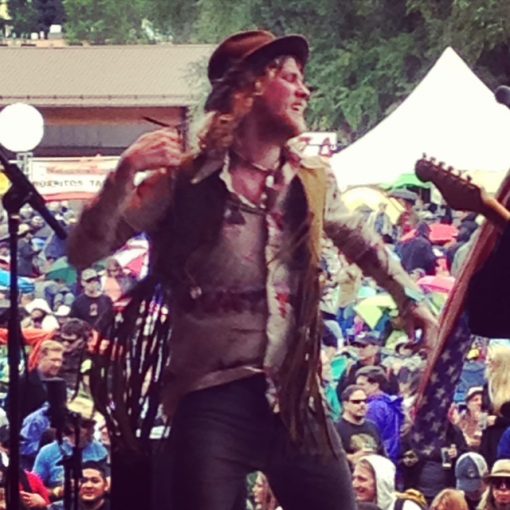 Following Allen’s set we took in a little dinner.  By which I mean the festival served us steak and lobster.  There’s a strong chance we’ll be coming back to Telluride next year.

After our bellies were filled we caught part of Gary Clark Jr.’s set.  Obviously that wasn’t a disappointment.  That mountain backdrop makes for something really unique when you’ve got a guitar-man like Gary Clark playing in front of it.  Using words like majestic is really not my game, but it’s hard to describe this any other way.  So majestic, magical, memorable, all a that is what this was.  At one point I overheard a couple of folks to my left talking about “doing that van thing tomorrow morning at nine-am.”  So I says to them, “hey that van thing is me and we don’t usually do much at 9AM.” 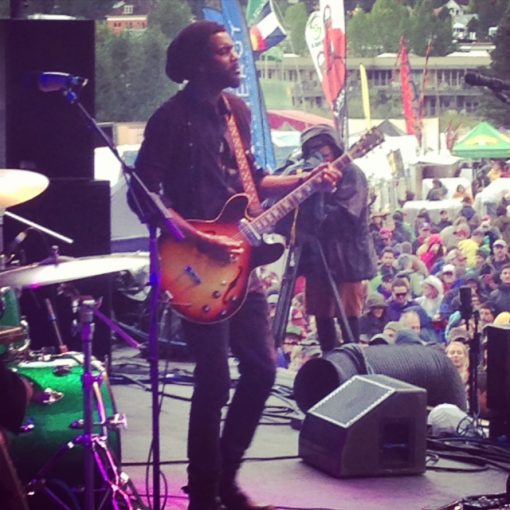 Turns out this was a pretty fortuitous moment.  Had we not had that interaction, Otis Taylor and his band would have shown up the following day at 9AM, instead of at the scheduled 4PM slot. We wouldn’t have been there.  Funny when stuff works out like that. I’ll assume Jerry played a role in this.

After checking out Gary Clark’s set we headed back to the van to prepare ourselves for something that we’d been preparing ourselves to do for about two and a half years.  We’re huge Gary Clark Jr. fans and we’ve chased him around this fine country ever since we built our music machine.  We once had him cornered at Bonnaroo, but he had to shoot sessions for a couple of things called CNN and Billboard, whatever those are, and all we got was some video of him teaching me how to open a beer bottle with a cigarette lighter.  While that was a pretty sweet experience (for Gary of course), we really, really, really, wanted to get some tracks from him.

Telluride is where that finally went down.  He grabbed a bite after his set, because rock stars like steak and lobster too. Then he strolled over to our humble van with his guitar in hand.  It was night time, so we lit this one different then any other session EVER. Which we think will make for some pretty special content.  He played two songs, and when I say he went in on them, I sincerely mean that.  The dude utilized every part of the guitar in closing out “When My Train Pulls in.”  I ain’t never seen anyone pluck on the strings on the head of the guitar during a session before, but he did.

He even remembered teaching me how to open a bottle, which in the scheme of things was pretty cool.  Both of us kind of chuckled on that small world moment, “it’s kinda crazy to think that I’d run into a guy who I showed how to open a beer bottle with a lighter, that’s just so random.”  I agree, and I dig it. 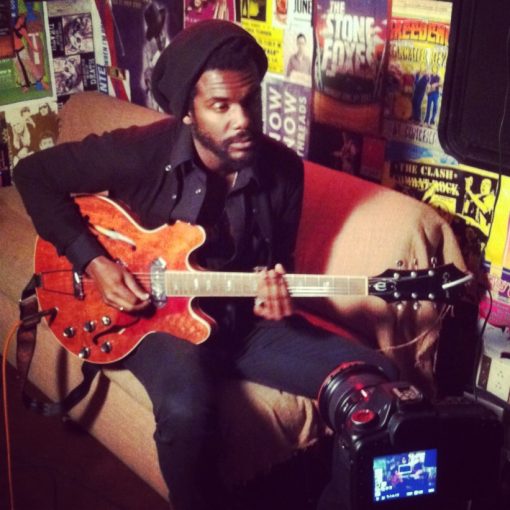 While all of this magic was going on inside of the van there was apparently some madness going down outside.  If you’ve ever been to a Jam in the Van taping you’d now that we stream the session onto a monitor on the outside of the van. So we had a bit of a crowd gathered for Gary’s session, but I guess that crowd was soon dispersed by Johnny-Law.  Some dude had too much of something and was acting a fool backstage, swinging at the police and causing a commotion.  So the police did as police tend to do, they tazed his ass, cuffed him, and created much more of a situation then needed to be created.  They even tried to open the door to the van and kick Gary Clark Jr. out because they said they had to “clear the area.”  That wasn’t happening though, and our boy D-Bell jumped in front of the door and told that sheriff lady she’d have to taze him too, because we were getting that damn session.  So you see the legnths we go to, to provide y’all with the heady good stuff, we’ll take a tazer to the face if the circumstance calls for it.  Luckily it didn’t come to that, and we were able to finish out the day on an extremely high note.

We caught the last hour of The Black Crowes set.  Those dudes are pure rock and roll, and it’s hard to get mad at them, even when they don’t allow anyone back stage, do any press, and walk off without an encore.  They are cool enough to earn the no encore badge, they don’t have to play one if they don’t want to, and you respect them either way.

Then it was back to the condo for a bit of a freshen-up session and a return to the Telluride streets.  You see, every night after the main festival grounds close down, the party continues at the bars and venues around town, where festival performers play special late night shows. 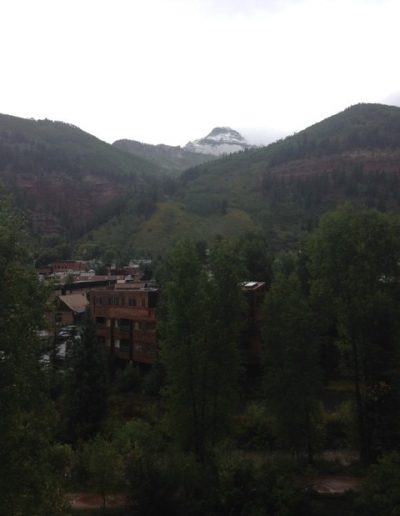 Not a bad view to wake up to every morning.

Our choice for that evening was the combo of ZZ Ward and Allen Stone, because you know, you can’t go wrong with that.  Neither disappointed, and Mr. Stone’s outfit may have been the most outstanding part of the night.  Dude can wear fringe smoother then Davey Crocket… 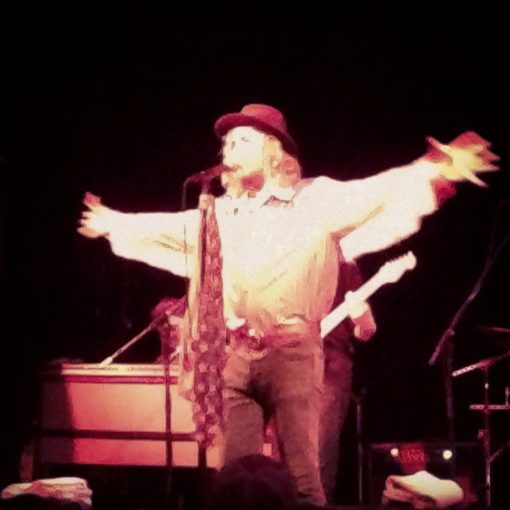