When I’m at a music festival the worst part of my day is the five minutes in the morning during which I roll around in my tent debating the positives and negatives of getting up and finding a bathroom.  This for me is a brutal regimen, whereby my hangover is in conflict with my bowel system, and ultimately concludes in the bowels winning out after what must be at least a few minutes of significant discomfort.  The resolution coming when against my will I wriggle out of the tent, stumble into the sunlight, and shuffle towards a bathroom.  Like I said, this is the worst part of my day, so obviously none of the days are that bad. 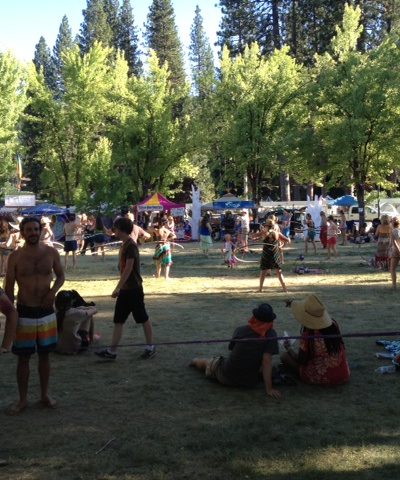 Other low-lights on Friday at High Sierra Music Festival were the massive line at the swimming pool right outside of the festival’s gates (which is awesome, the pool not the line) and the fact that we completely forgot to buy any vegetables to cook along with the abundance of meat that we brought.  Again, not too bad if those are the worst.  There was a river to swim in, and vegetables, who needs vegetables?  We’re men, we eat steak.  So really, just the morning dump walk was the only struggle Friday. 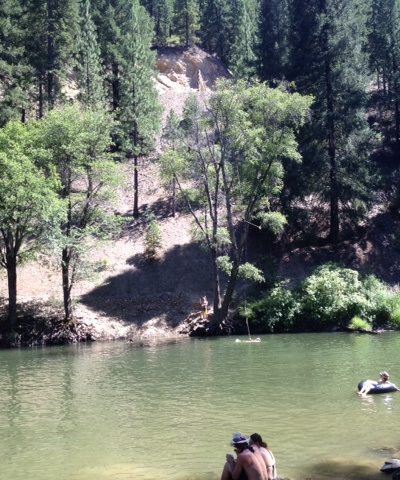 That dirpie* filled river life yo! 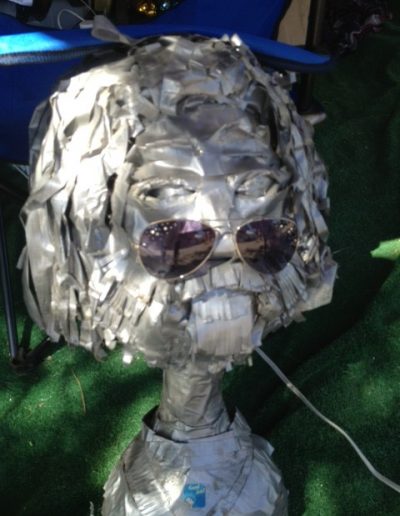 Some head has a lot of time on their hands. 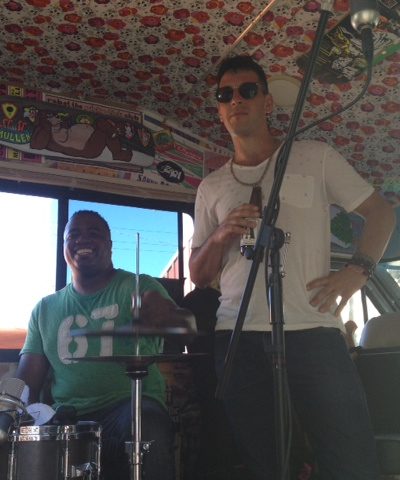 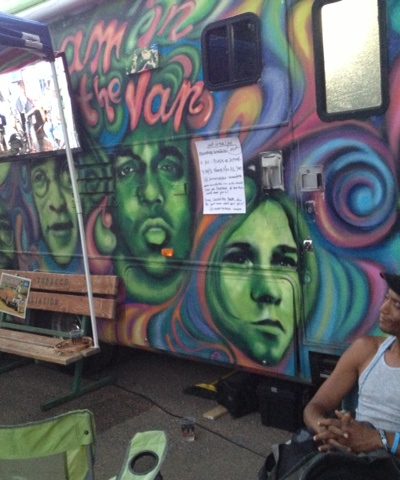 The crowds around the van started getting a bit thicker as well.  People are starting to catch the vibes that we’re throwing out.  Some dudes came up to us stoked because Jam in the Van were their favorite videos on the internet.  Shouts to those guys, and thanks again for the rad stickers you hooked us up with.  This guy hand cut elaborate grateful dead themed stickers with an exacto-knife.  He gave me two sick ones to stick on the van.  I traded him a handful of stickers that we got at the price of 2,000 stickers for $100.00, but they say “heady vibes” on them, so I think it’s a fair trade. 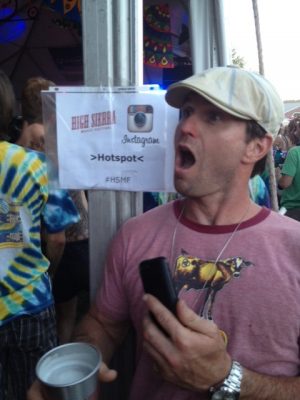 I got to see my first Houndmouth show and it left me significantly bummed that we didn’t get them in the van at either Bonnaroo or High Sierra.  They were all about it during SXSW, but of course, we didn’t make it there this year.  Now apparently they’re busy.  Crazy how fast a band goes from a facebook page to the world… We’ll get’em.  I got faith, and actually, I met dudes later in the weekend at the van and showed them how neon it was from the outside and they kind of gave an interested nod.  They then went back to their partying, but interested nod means we’ll bother them again. 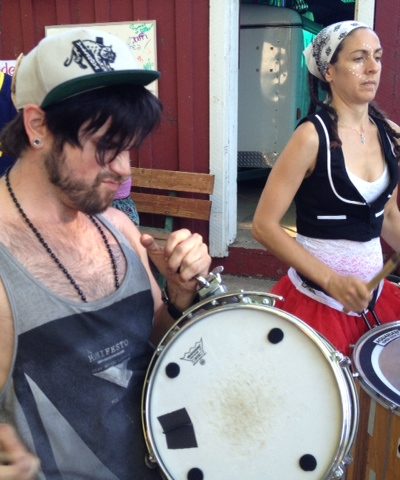 Lord Huron’s evening set also left me a bit miffed about his non-van-performance.  I didn’t realize that a Lord Huron show was such an experience.  The sound was much bigger and the show was much more grandiose then I came expecting. It put away any doubts I had that Lord Huron could be a Friday night phesty headliner, and solidified my choice to skip out on Primus (2D) on account of it not being Primus (3D).  Bring more D’s next time Primus. 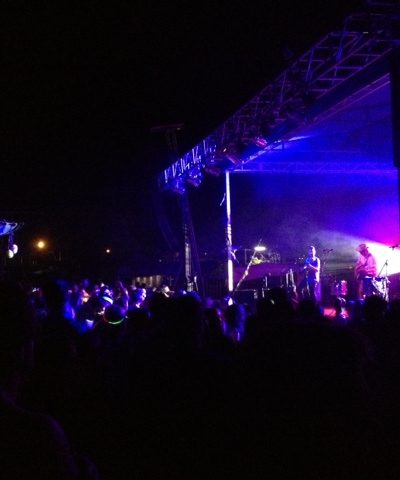 I didn’t make it to any late night shows Friday evening.  I spent my time instead roaming among the madness that surrounds High Sierra.  Heads go hard here and each campsite is more elaborate then the next.  There’s hula hoop and glow stick classes, slack lines and hammocks hitched to every tree, costumes and glow sticks galore.  To quote Spud “man, this just like the Venice Boardwalk only it ain’t got the ocean.”  I’ll addend him, because after 8 years of living in Venice I loathe the boardwalk, and while High Sierra did have it’s fair share of off color folks, they weren’t there to sell me grains of rice with my name on them or to beg me for weed money.

At high sierra they’re all there to have a good time and hear great music.  They don’t put on the costumes to freak a buck out of some mesmerized tourists.  They put on the costumes because they want to.  Because it gets them to whatever happy place they want to be at.  It’s freeing.  High Sierra Music Festival was very freeing, if I may say that without sounding like too much of a douche.  You know, every part of it up until I had to wake up on Saturday morning and dump out all the meat we barbequed the day before.  That was less than freeing. 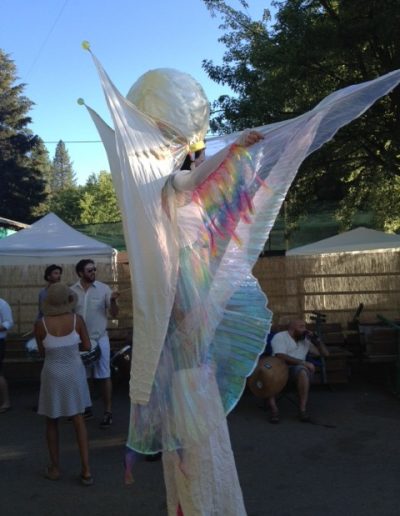 Every time you say you don’t believe in fairies… 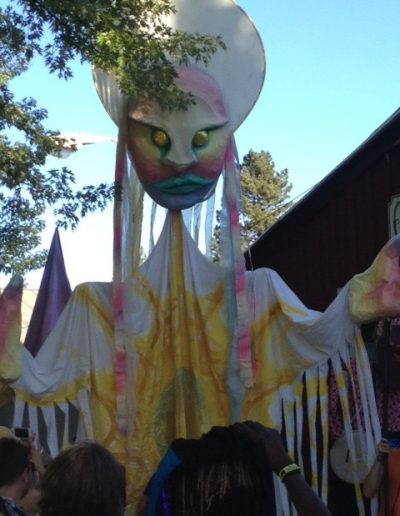 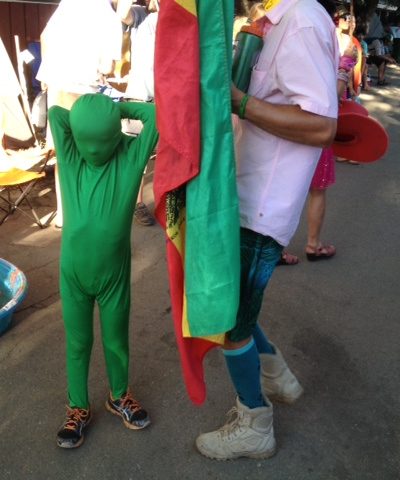 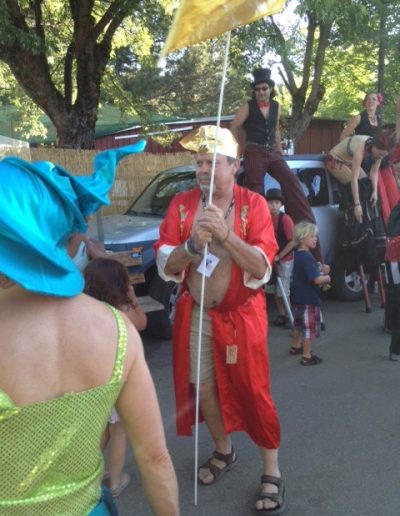 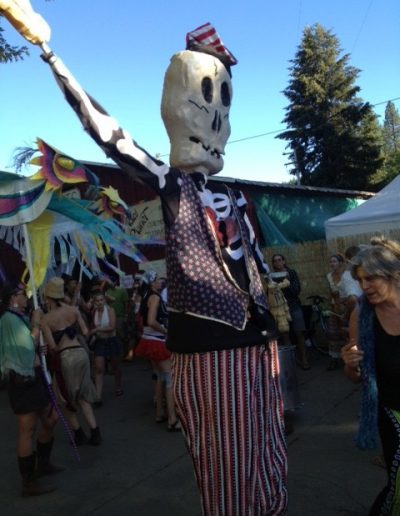 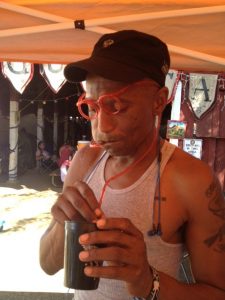