For our first venture to the crunch-fest that is HSMF, we rolled in way past sundown on a Wednesday night, because the road was so slow.  There was no other reason for our late arrival, and if there was it certainly had nothing to do with gas station lot lizards.  We certainly didn’t drill any lot-lizard’s sandals to the wall of the van.  One-lane roads are just a bitch.

Our late arrival forced us to set up camp in the dark.  Well, the late arrival and the fact that for the second trip in a row we forgot to buy batteries for our lanterns.  We have 3 lanterns, 0 batteries that fit them.  Fortunately our campsite for this phesty was in a barn and there was electricity and lights to help us out.  It also meant that if it rained, which it did not, that all of our crap would not get wet, which it did not. 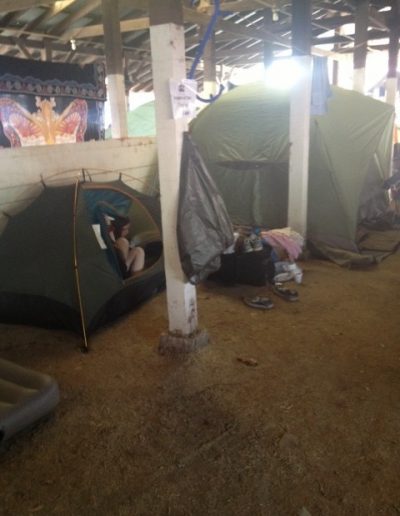 Once the tents were pitched the next thing on our list was to start drinking.  So we did that, and eventually I bumped into our buddy Don from Lagunitas, because all the Lagunitas folks were camping with us.  So Don asked me if I wanted more rum in my drink, and I said yes, and I watched the Highway Poets jam for a little bit on a couple of guitars Yamaha was kind enough to lend us, and that’s all I remember between then and the throbbing headache that I had in the morning.  Don won again.

Mind you, that was a Wednesday night, the phesty had not really even begun yet.  The heads at Lagunitas and at High Sierra as a whole, go hard.

Thursday was the only day that the shower lines were non-existant, so I took a shower on Thursday in preparation for the packed schedule of bands that we were filming during the day.  That’s not to say that the shower lines were ever massive.  Showering wasn’t such a big thing for many High Sierra goers, I think that probably holds true for them even when they aren’t at High Sierra. 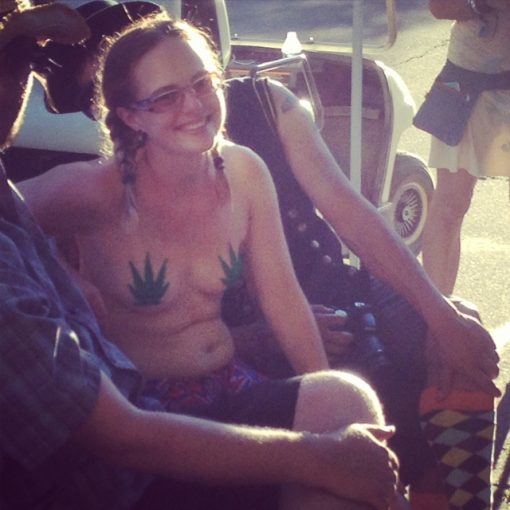 We kicked it at the campsite for most of the day  because at this phestival we were an attraction.  Our speakers were out and our monitor screen was on and we were parked along one of the phesty’s main drags.  They gave us some benches to make bleachers out of and I put up our filming schedules at the beginning of the day for folks to take note of.  They did take note, and they flooded the area in front of the van for every performance.  There was dancing, cheering, hula-hooping, spinning, etc.  It was always day time and thus too light out for glowsticks, but had it been dark there would have been glowsticks, I know this for fact.

Beginnings of a scene… 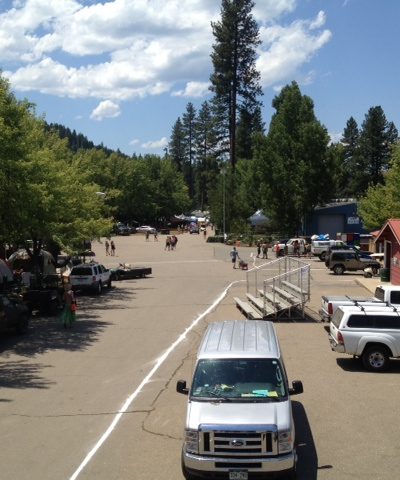 First up on the schedule were two bands whom I had not heard much of prior, Shook Twins and The Melodic.  As is the case with most bands that Jam in the Van, they were both surprisingly good and I found myself downloading their music as soon as I returned from Quincy.  The two other acts for the day were ones that I had certainly heard of before, Allen Stone and Leftover Salmon. 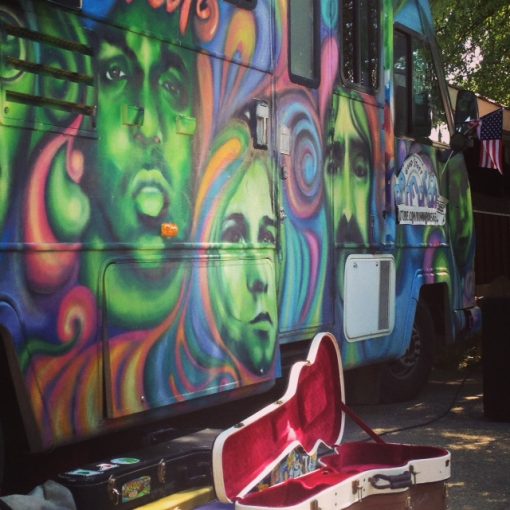 Shook Twins own those guitar cases. 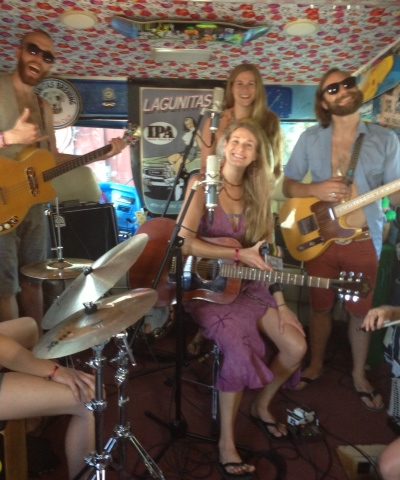 We warned Spud that Allen Stone sang with a lot of soul that might be reminiscent of someone of African American descent, but Spud didn’t believe it.  Then cut to Spud doing his patented half C-Walk dance and saying “oh man, no he ain’t singin’ like that!  Oh man!  That’s crazy.”  You get the gist… 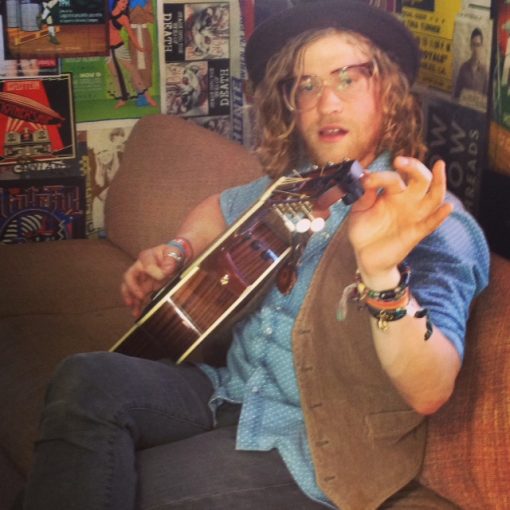 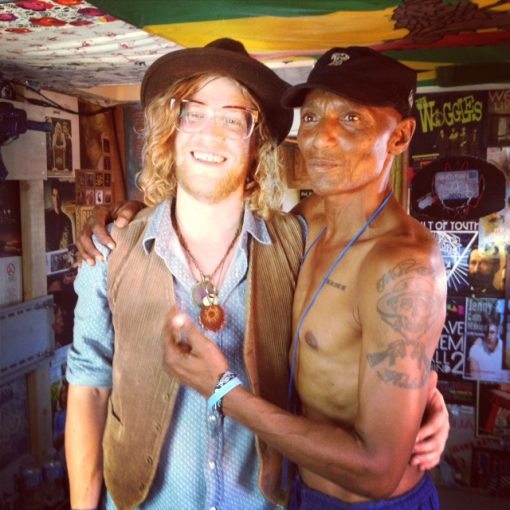 Spud verified that Allen Stone was in fact white.

Leftover Salmon is OG head-fodder, old pros, but they hadn’t ever played in a Jam Van before. So that’s always cool to see how some old heads handle the van. You know, cause the yutes, they’re all fresh, they’re taking it all in, they’re used to the internet and all its quirks.  The old heads though, they’ve seen a lot, so to give them an experience that’s new and different, to get a twinkle out of their eyes, that’s always a good feeling. They played until the damn drum parade came by and ended the set abruptly. 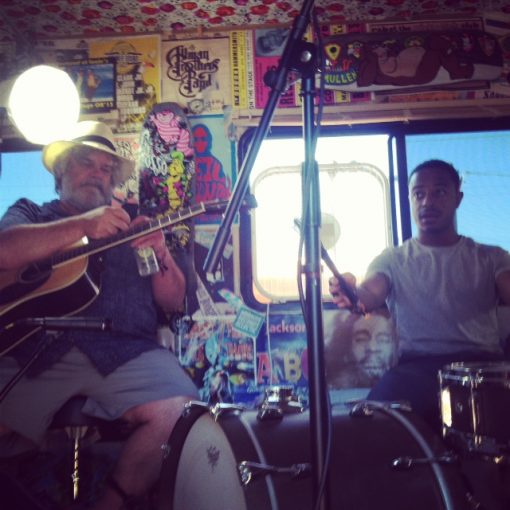 We had no idea that everyday at 7PM a parade started and finished right next to where we were set up. It was cool, they had sweet costumes, and a giant Jerry float, but it was definitely not conducive to filming and recording audio.  So for the rest of the weekend we worked around it, but that first day was a bit miffed. I kind of got into some bad-vibes with a purple faced chubby dude wearing a three-pointed jester’s cap and a drummer in suspenders and clown makeup.  Yes I just said that.   In the morning we all realized that High Sierra was no place for bad vibes, and hugged it out, but at the time they cut our set short and I shot them with Jam in the Van bracelets. An eye for an eye if you will. I did feel bad about that though. 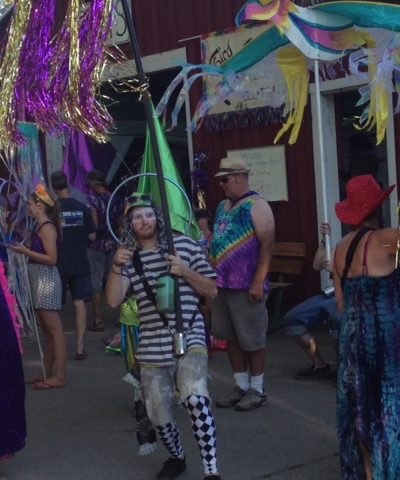 These people have achieved very high levels of head. 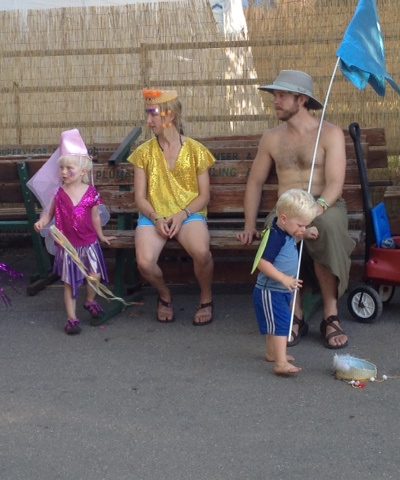 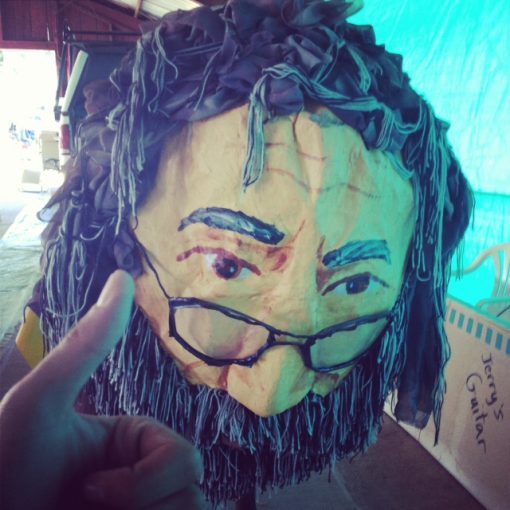 Yes, of course this is heady.

You see, High Sierra Music Festival is the type of place where you hug someone you just met rather than shake their hand. It’s the type of place where people don’t wipe off the mouth of a bottle when you hand it to them. Where staying cool means setting up a baby pool full of dirty water and sitting in it, and has nothing to do with appearance or anything other then your body temperature. Let me analogize the heady-ness of this phesty through a first day experience.

So we’re at the van hanging between sessions and this little dude, maybe 6-7 years old comes over and walks into the van. He starts talking about how he likes drums and how he’s going to be a drummer. He amuses our camera guys for like ten minutes. All the while we’re all thinking “where is little dude’s moms?” Then some heady lady comes over, yells back to her group “hey I found him,” then looks at the boy and goes “duuuude… you’ve got to tell me if you’re going to go off like that man.” So when I say HSMF was heady, and that the people were extra heady, that’s what I’m talking about… 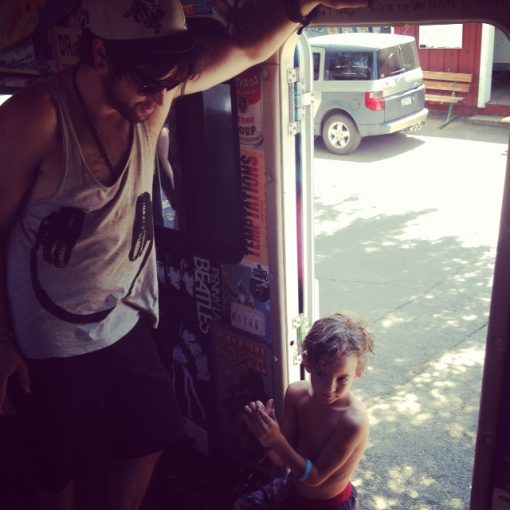 As for the rest of the night, well it featured Robert Plant on the phestival’s main stage.  He did a lot of Zeppelin, but he neglected to even tease towards “Freebird.”  Being as it was July 4th I felt a bit of a let-down.  I tried to speak to Mr. Plant about this (speak meaning yelling “Freebird” at him), but he must not have heard me.  I will have to contact his people to make sure that if we ever cross paths again this type of issue is sorted out. 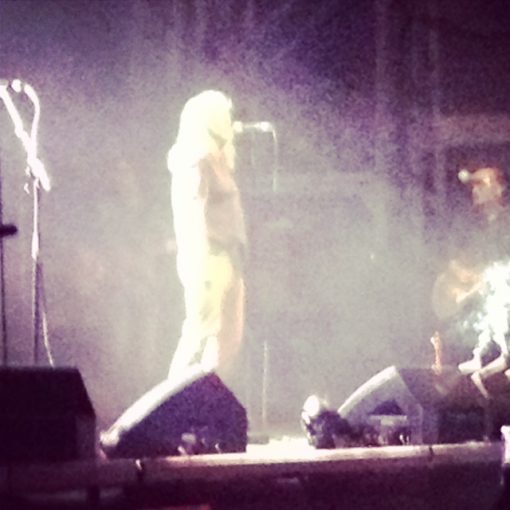 Some dude who didn’t play “Freebird”

After Plant’s encore (which wasn’t “Freebird”) it was off to the High Sierra late night sets, which take place in barns and have different ticketing then the festival proper.  You have to pick which show you want to go to beforehand and get a ticket for that one.  We went with Pimps of Joytime and Orgone.  I want to say I loved it, which I probably did, but I can’t say that I lingered very long.  You see, there was a field towards the main stage where they had a glow-toy testing area, and once I caught wind of that I kind of got tied up for a little while.  Maybe more than  a little while.  They had glow nun-chucks, so um, yeah, I hung there for quite some time and met some dude with LED gloves on.  By “met” I mean that I stared at him doing crazy stuff with his light gloves until I got dizzy. Then I found my tent in a barn and went to sleep.  It was  good day. 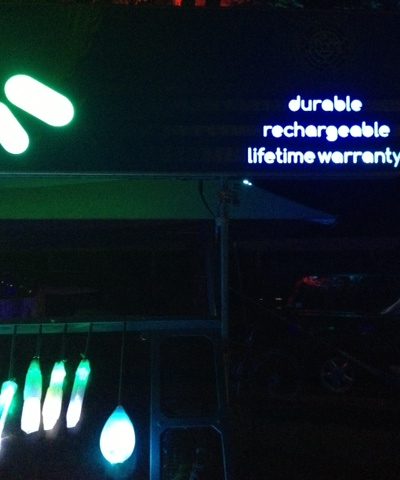 Read the sign, then realize it’s talking about glow-sticks. 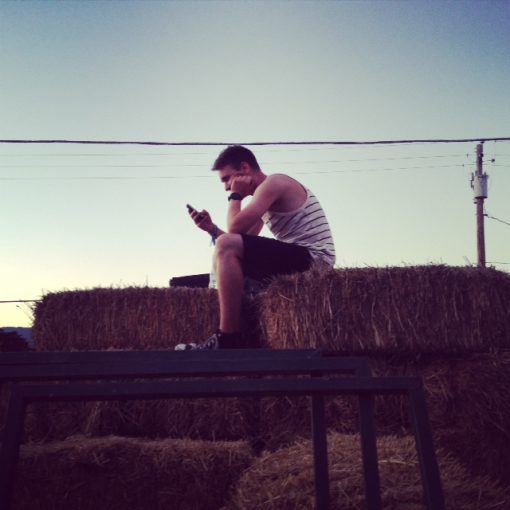 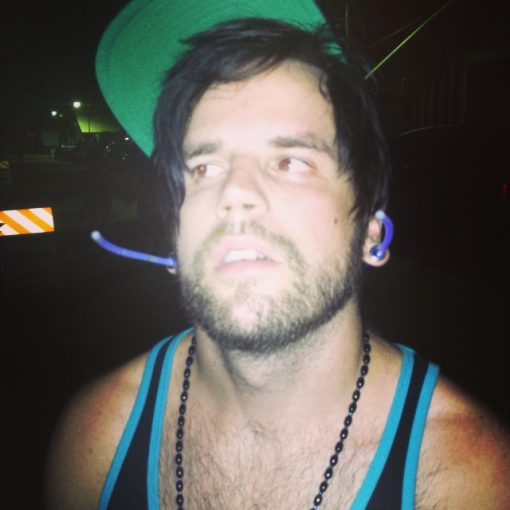