“It comes from a need for wide open vistas, rollicking street parties, laid back lifestyles, and communities that you build yourself.” – The Dustbowl Revival 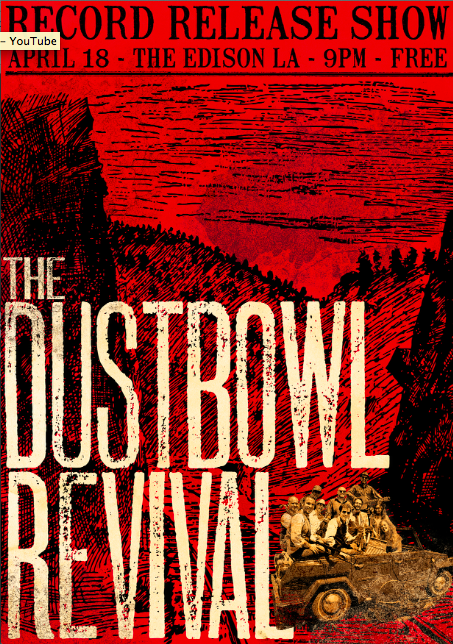 We’ve followed Dustbowl Revival’s Los Angeles based story closely for the past two years. The collective is an intricate web of rotating parts, twenty-seven heads played a role on their new album, Carry Me Home. It keeps their sound fresh, a heady blend of old school bluegrass, gospel, jug-band, swamp-blues, brass, and swing, their shows nor their album are ever lack for energy or spirit. It’s an honest reflection of a band that seems to never sleep. There’s only a handful of days where their name is not present on a concert calendar, and these tireless efforts have helped this collective become one of LA’s premier roots music operations.

In recent months the band has been two-steppin’ away from their LA home-base more consitently, traversing much of the west coast. Their latest full length offering will hopefully be a launching pad for wider national success, as this is a band built for festival runs and long nights of driving towards endless horizons. Carry Me Home plays in the vein of it’s creators, diverse, unrestrained folk-music. The album jives between re-imagined old school covers and Dustbowl’s own original cuts. Ten songs, each one you can dance to in a different way.  Go hear Carry Me Home for the first time at the album release party at The Edison tonight (April 18).