HEADY ALERT – BritWeek at The Echo

So it’s BritWeek in Los Angeles and The Echo is celebrating with some sweet billings.  If you don’t know, BritWeek is “a celebration of all things British in California,” so the bands playing are Brit’ish, duh. Whether or not the taco cart down the street is serving bangers and mash is unconfirmed.

Night one (Friday 4/26) features The Veils, they’re on Rough Trade Records and they get muchos hits on YouTube.  If that isn’t enough for you to make this show your Friday evening plans then you should give them a listen and decide after that.  They’re accompanied by Andy Burrows and Pop Noir.

You can assume that night two (Saturday 4/27) is going to be a fairly crowded event as it’s headlined by New Build, a love child hatched between members of Hot Chip and a member of LCD Soundsystem (yes, the LCD Soundsytem, OMG).  Expect a sweaty room full of hipsters, I’m not trying to sell it short with that, it will no doubt be awesome.  That bill is also packed with other artists, I will leave it to you to Google them.  I trust you will.  Update:  This event got moved because The Rolling Stones scheduled a surprise performance at The Echopl

Night three is Steve Mason with Dark Furs opening. The poster has Beta Band in parentheses so I dunno if that means he’s with the Beta Band or performing their songs, or what, but it’s on the poster, so there.  Update:  Steve Mason not able to make it due to Visa issues.

Night four (Tuesday 4/30) passes the reigns to Chad Valley he will coo to you in a Brittish accent while thizzy beats get all dissonant in the background. You will swoon.

They close it out on Night five (Thursday May 2) with Little Boots, who is hot, apparently has small feet, and will make you dance.

In conclusion, GO TO THE ECHO FOR BRITWEEK DAMMIT! 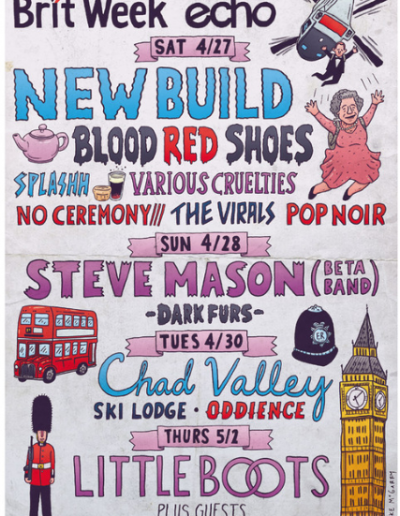