Grace Potter and The Nocturnals-The Wiltern-11/2/12 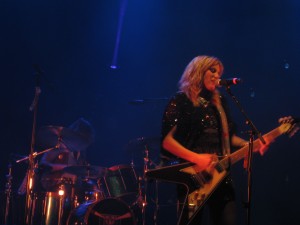 “I love to party in this town,” Grace Potter told the Los Angeles crowd during her headlining gig at the Wiltern last Friday night. It sure seemed like the crowd loved partying with her and her band the Nocturnals too. They provided a bit of soul, a bit of folk, a bit of country and a lot of rock ‘n roll for an excellent evening of live music. Touring in support of their latest album The Lion, The Beast and The Beat, the band took the stage and got things rolling with the new album’s title track which features a drum-pounding tribal chant that Grace enters to before strapping on her Flying V and exploding into a set of new hits, old favorites and some exceptional covers that didn’t let up for more than 90 minutes.

Early on in the show, Grace told the crowd that the night’s setlist was all requests she received from fans on Twitter. Following up the first number with “Nothing But The Water II”, a song she normally saves for later in the set, made it clear that the band continues to switch it up on a nightly basis. Other highlights in the main set included a soulful “Stop the Bus” where Grace exuded the sexuality of Otis Redding while bantering with the crowd, a solo “Nothing But the Water I” in which featured the leading lady all by her lonesome playing electric slide guitar, a very timely cover of “Gimme Shelter” dedicated to the people affected by Hurricane Sandy and, of course, Grace’s outfit, a highlight at every one of her shows.

Grace and the band are at their best when her two guitarists, Scott Tournet and Benny Yurco, are given free reign to take the  tunes into their own realm of psychedelic guitar madness. Yurco, the extrovert, and Tournet, the introvert, tried to impress each other with one-upsmanship all night long, while Matt Burr thumped the drums with the energy and excitement of a 10-year-old on Red Bull. Michael Libramento is the newest Nocturnal. He replaced Catherine Popper on bass at the beginning of the year and though the songs themselves don’t suffer, he hasn’t found his place in the band’s chemistry on stage yet. While the rest of the band is playing off of each other and interacting throughout the course of the evening, Libramento is almost a spectator throwing bass lines at the band from afar.

The show’s encore started off with the new single “Stars”. With the exception of “Apologies.” I prefer Grace’s upbeat numbers compared to her slower stuff. That said, the vocal range she reaches on this song makes it impossible to not be fully engaged when she’s belting it out live in front of you. Next was a cover of Soundgarden’s “Black Hole Sun,” which even brought a smile to Tournet’s (the introvert) face while he was playing the guitar licks and solos. The evening ended with a crowd participating rendition of “Paris (Oh La La),” which had the audience singing the chorus as they filed out the building.

Next time Grace Potter parties in your town…Party with her!
-DBell