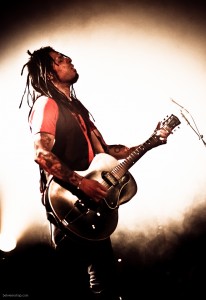 This January guitar virtuoso Eric McFadden will be playing a residency at The Mint in Los Angeles. For five straight Wednesdays starting January 2, Eric will welcome a host of special guests including Nels Cline, Steve Molitz, Mike Watt as well as members of Fishbone, Morris Day and the Time, Edward Sharpe and the Magnetic Zeros, Better Than Ezra and More. 5 night passes are available for $40 through The Mint as are individual tickets for $12 in advance and $15 at the door.

OR YOU CAN WIN 2 TICKETS TO ALL 5 NIGHTS HERE!

All you have to do to enter is send us an email to ShowStories@JamintheVan.com or tweet @JamintheVan and tell us what’s the headiest show or festival you’ve ever been to. We’ll pick a winner around Christmas time and that lucky boy or girl will get their name on the door for five extremely heady evenings at The Mint LA. Dig on what the prize holds in store for the winner: