Cobraside is a Magical Place

When you’re in a city like New York or San Francisco, you walk around and you feel a sense of wonderment, like around the next corner anything could happen, or like, you’re going to stumble upon something great, some hidden gem of a bar or a shop, and it’s going to be like a movie. Ironically, Los Angeles, the city where movies are made, doesn’t really give you that magical sense at all when you’re walking around it. In fact, you rarely ever walk around Los Angeles, it’s not made for that. It’s made for driving. So you sit in your car, and you pass by places that you’ll never stop and get out of the car to see, and people you’ll never stop and get out of the car to meet, and you do that every day here. It’s a bit mind numbing. So when you finally get out of the car at some place that might have a bit of magic in it, and it’s a new discovery, it’s all the more special.

By this point in the adventure we’ve filmed all over this town. From famous venues, to dirty alley ways, we’ve run the gamut. Yet I don’t think there’s been a place yet where I’ve said, “damn, I want to come back here.” That is, until we filmed at Cobraside Distribution. It’s a very unassuming looking building in Glendale. That already puts it as a place that sans the Jam Van, I may never have discovered. Glendale is far from my home in Venice Beach, and I generally couldn’t think of many reasons why I would need to go to there. Now I have one.

When you go around the back of Cobraside (you can enter from the front too, but the back is more fun) you find a parking lot adjacent to a garage with various couches and chairs lining the exterior and interior of the covered space. Once through the garage and a small corridor that connects to the main building you enter upon what for avid music fans is somewhat of an oasis of joy. Shelves upon shelves carefully stocked with records, CDs, and casettes organzized alphabetically ranging from The Beatles to the most obscure of your aural desires. You can pretty much find anything you’re looking for there, in terms of albums. If you can’t, well, odds are it isn’t very good. 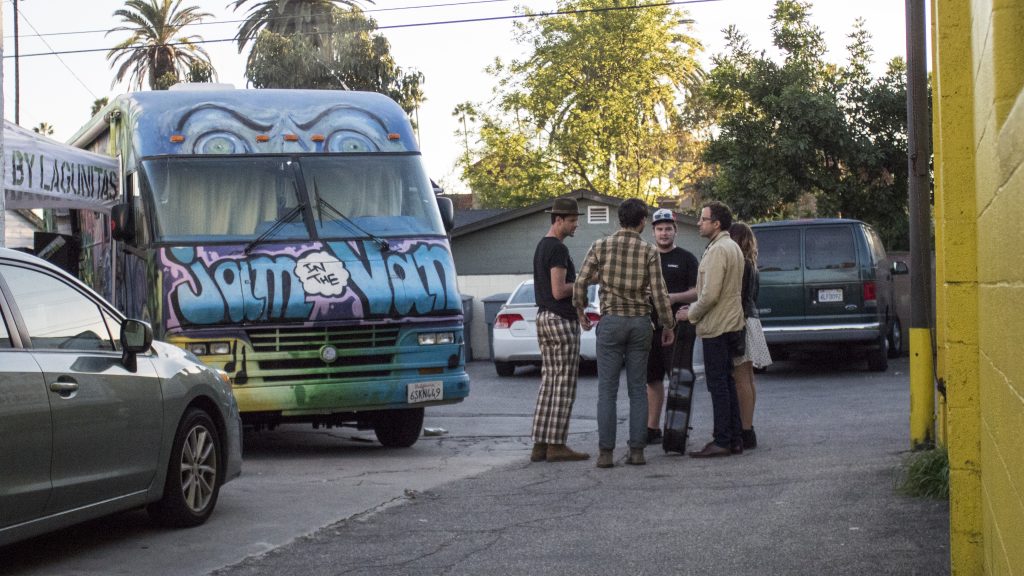 I arrived around noon to find The Van parked appropriately next to Cobraside’s garage our first band, Gateway Drugs, loading in their gear, and Spud in deep conversation with a man who goes by the name of Big Homie. He’s a Pastor who runs a youth outreach program called the Big Homies Project. He also moonlights as a t-shirt screen-printer, which was his reason for being in attendance at that day’s Jam in the Van shoot. We’d ordered a new run of shirts (available in our webstore) from Big Homie, and he was personally delivering them to us. Spud told me that he thinks that me and Big Homie are going to do great things together, so we’ll see what the future holds. As of now, we’ve got some rad t-shirts, which ain’t a bad start. 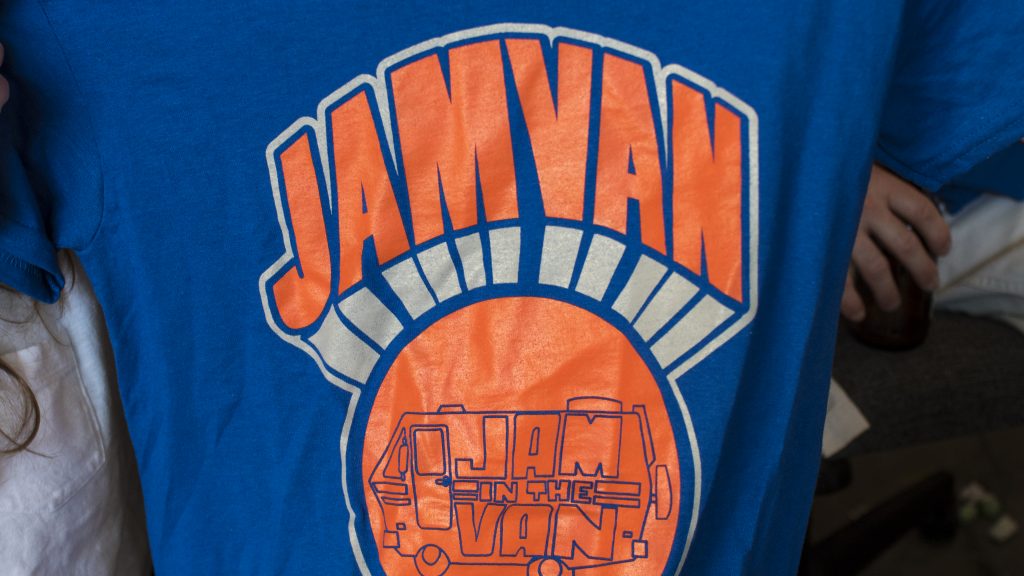 As for Gateway Drugs, they were waiting on a high-hat cymbal… and waiting… and waiting. The longer they waited, the more time I had to wander around in Cobraside looking at records. The way you do it, is when you see an album you like you grab it off of the shelf and you ste it in your pile. Your pile grows and grows, and when you’re ready to pay you tell someone at a desk and they look up your records on the computer and generate an invoice for you. You don’t see the prices of the records until the bill is generated. Can you say dangerous?

That high-hat finally made an appearance, and the show was underway. My pile was about five records high at that point, we’re talking a couple of weeks worth of allowance, so not too bad.  The day however, was young.  Like our buddy Jay the Geologist says, “Gateway drugs is a good name for a band.”  Jay also says that you always “need a good base.”  Which is essentially what starting with a strong band name is, a good base.  So Gateway Drugs has a good base, and judging by their solid session they have a lot more going for them.  It’s solid rock and roll all the way around. 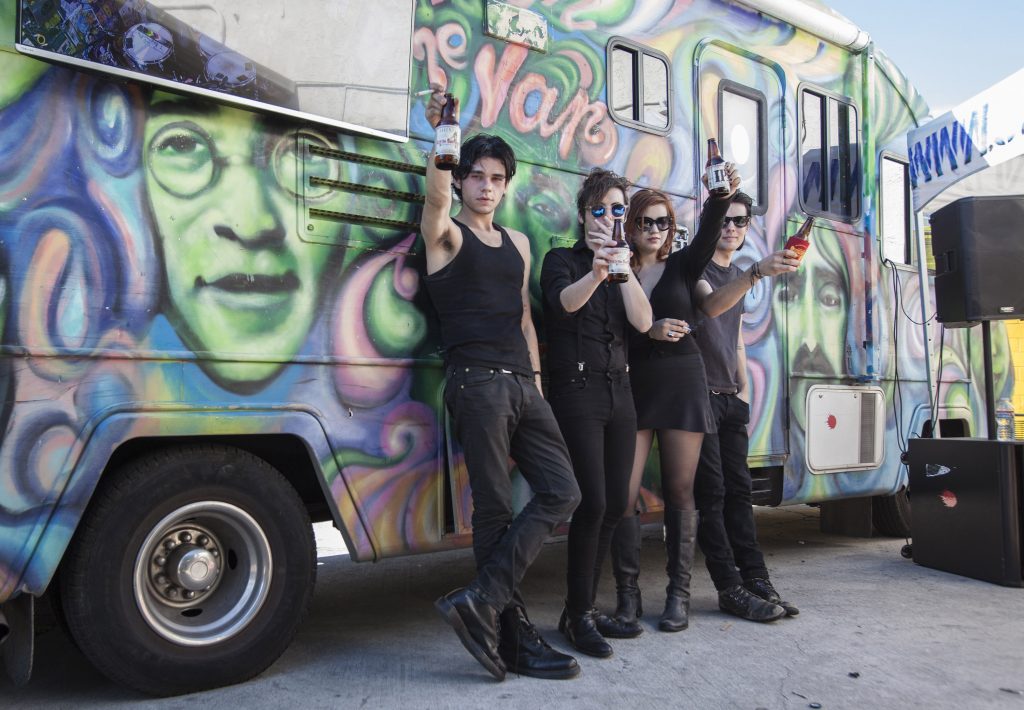 Following Gateway Drugs’ session the fine folks at Cobraside began to heat up a grill and get some burgers and dogs going.  It reminded me of the early days of Jam in the Van, when we used to film in my backyard.  We’d heat up frozen pizzas and french fries, and get a grill going with burgers and dogs, and anyone was welcome to come by and listen to the music and have a snack, albeit not the fanciest of fare.  That was the vibe the Cobraside shoot was giving off, and we were all really digging it.  I was also really digging into the record crates, the stack was at about 7 midway through the day when Xavier Cafeine took the stage. 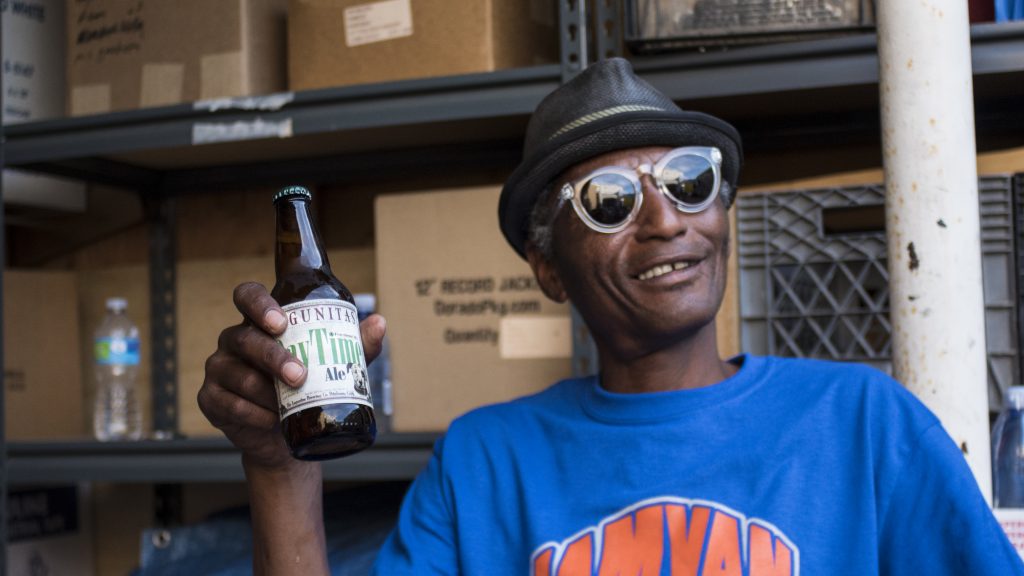 No, that’s not a typo, and yes, it tricked me a couple of times.  Xavier Cafeine, or just Cafeine, spells it with just one “f.”  I don’t know the reasoning, nor do I drink coffee, so I’m not offended by the poetic license.  I noticed MR. Cafeine earlier in the day, although I didn’t know at the time who he was.  He was just a dude in all black, jeans, and a denim jacket, and dark shades, who looked like he was suffering for his art.  Because it was like 90 degrees out that day, and his outfit was clearly more form than function.  Add wearing hot clothes in really hot weather to look rock and roll to the list of things that I won’t ever understand, but hey, if it works for the artist, than it works for me. 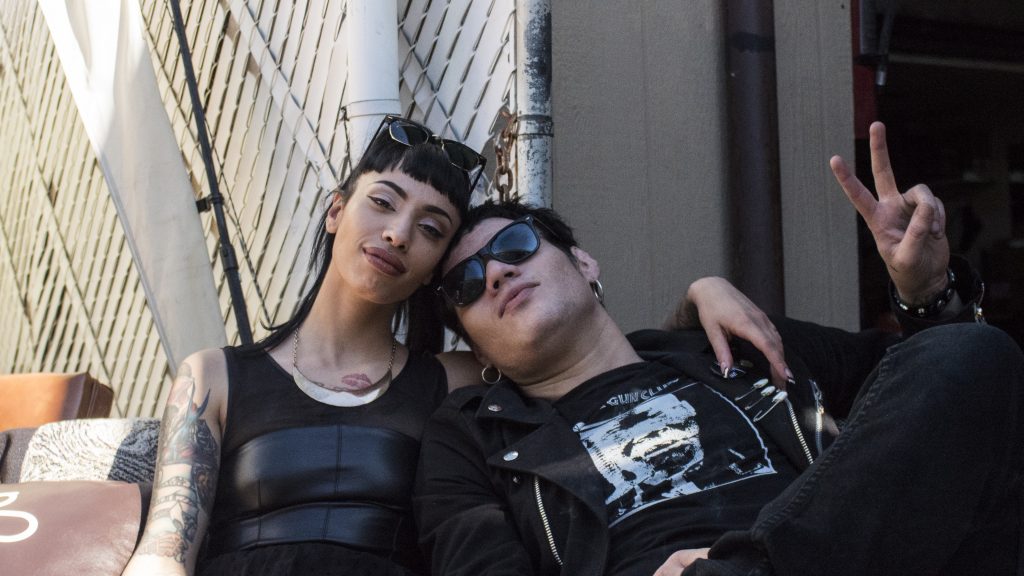 Apparently Xavier had just met the backing band that played support for him earlier that morning.  They’d never played together before.  However, you wouldn’t be able to guess that based off of the session that they played in The Van.  It was tight, and the tunes matched the clothes, to say the least. 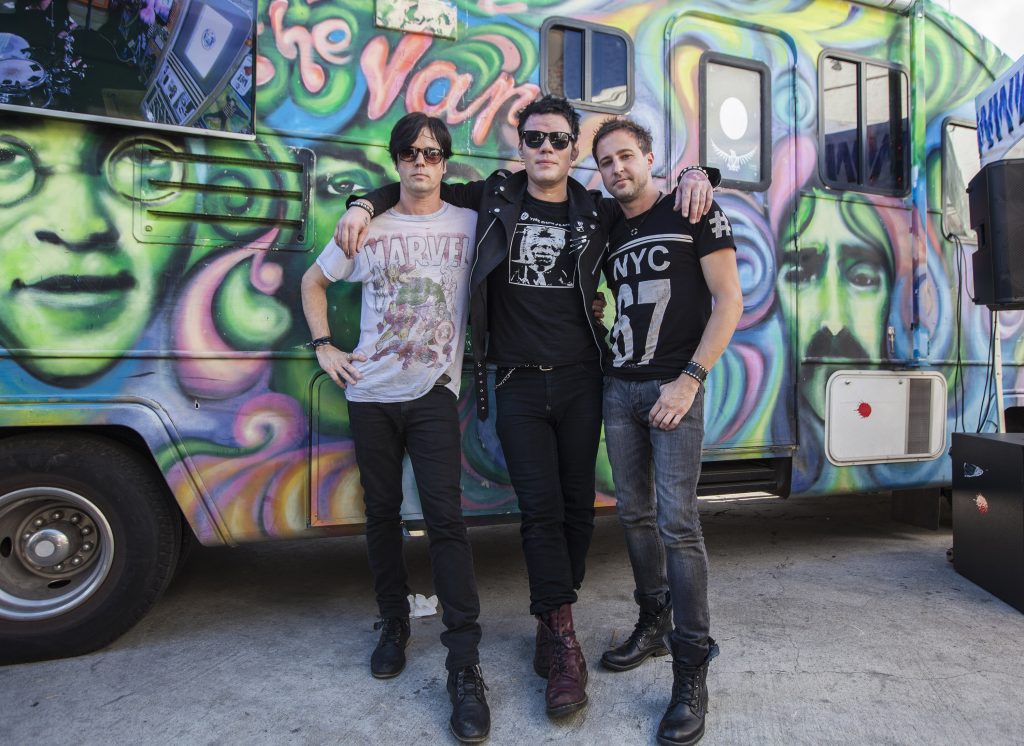 The third band on the docket was Banta.  We’d owed them a session from the debaucle that took place at USC a couple weeks prior.  This time around there were no breakdowns and no re-schedulings.  Everything went off without a hitch.  They played a lovely set, and got to go record surfing inside of Cobraside and do some impressive group-photo-posing.  Nobody has ever done a hand stand during the group shot before.  Chances are we couldn’t have executed that in an allen behind a frat house, so it was probably better that thier shoot got pushed to this day instead. 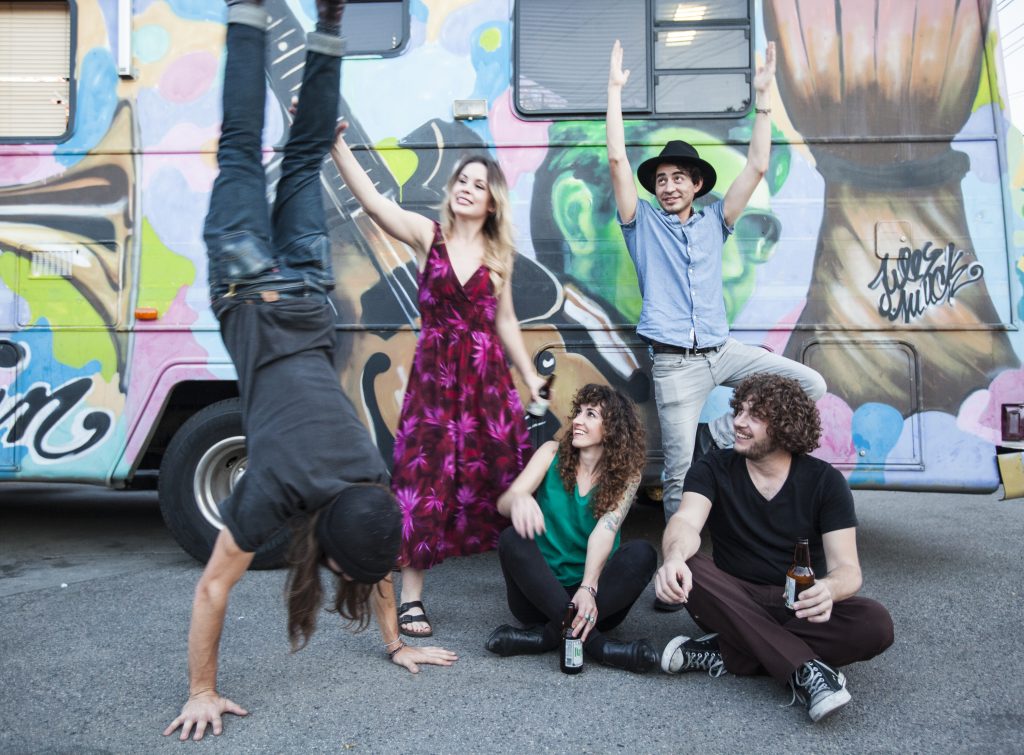 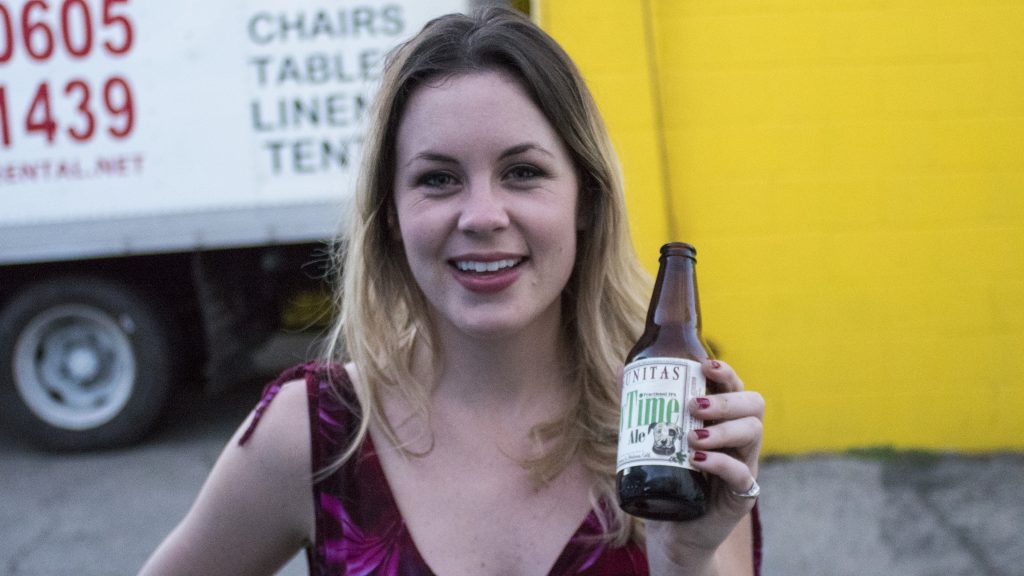 Banta was followed by The Aquadolls, a band we’d learned about via the Burger Records promotion machine.  If you come with a Burger recommendation there’s almost a few certainties.  You play some kind of fuzzy, garage-esque, surfy, poppy, rocky-rolly, type of music.  That music is quality music.  You probably like weed.  I can’t vouch for the last one of those statements in regards to the Aquadolls, but the quality fuzzy rock and roll was a certainty.  I’ll let the fellow’s eyes in the upper left-hand corner of this group collage photo settle the debate on the weed thing. 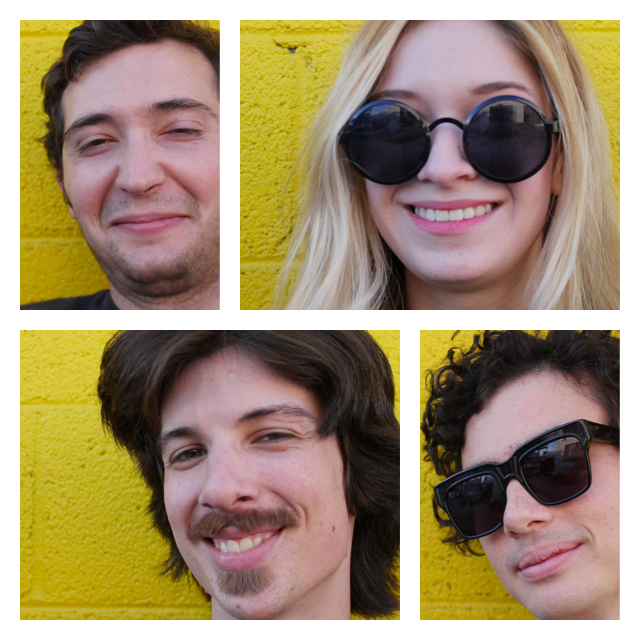 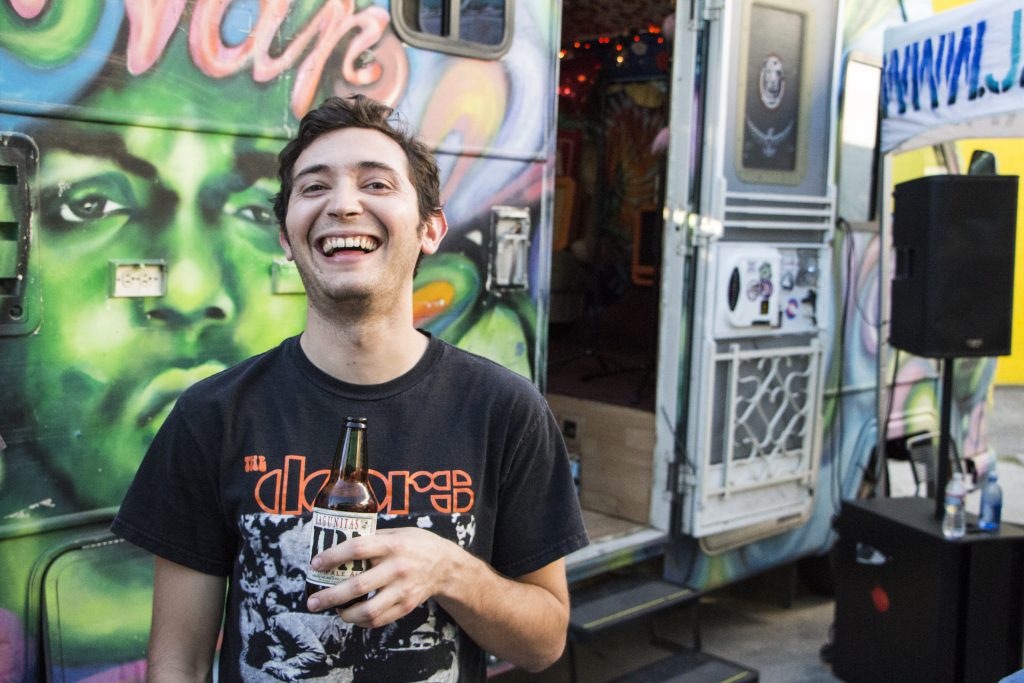 Towards the end of The Aquadolls’ set I figured I should go ahead and settle up with cash register and cut my vinyl pile off at about 13 records.  I would have made it out of there with some solid bargains had it not been for my affinity towards the Grateful Dead.  Those European tour Dead albums are apparently not cheap.  Oh well, you only live once, might as well have cool shit while you do. 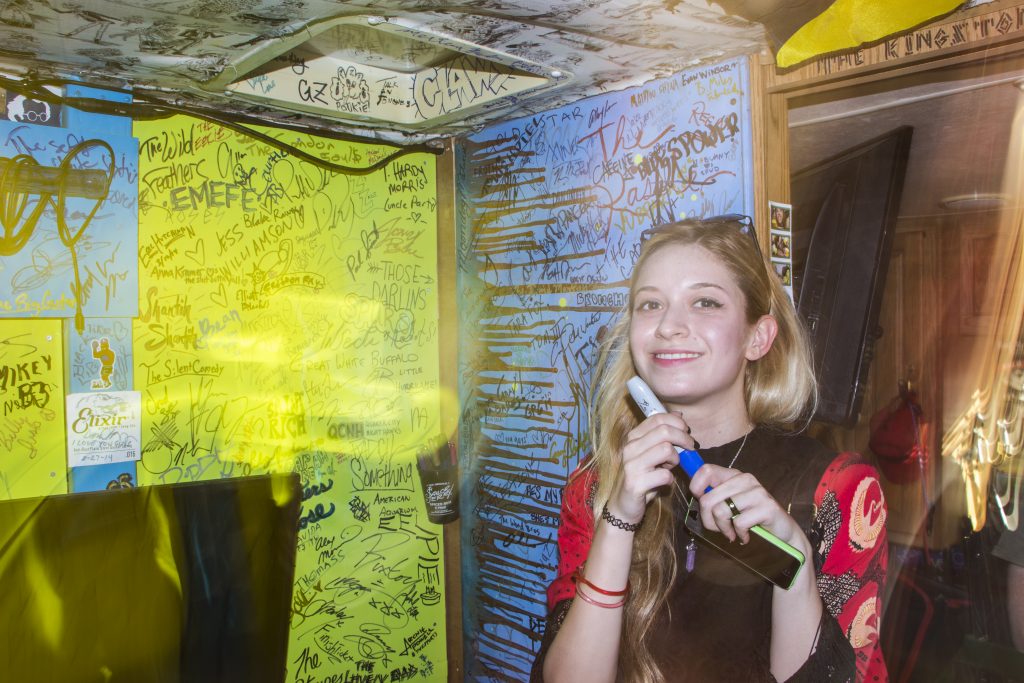 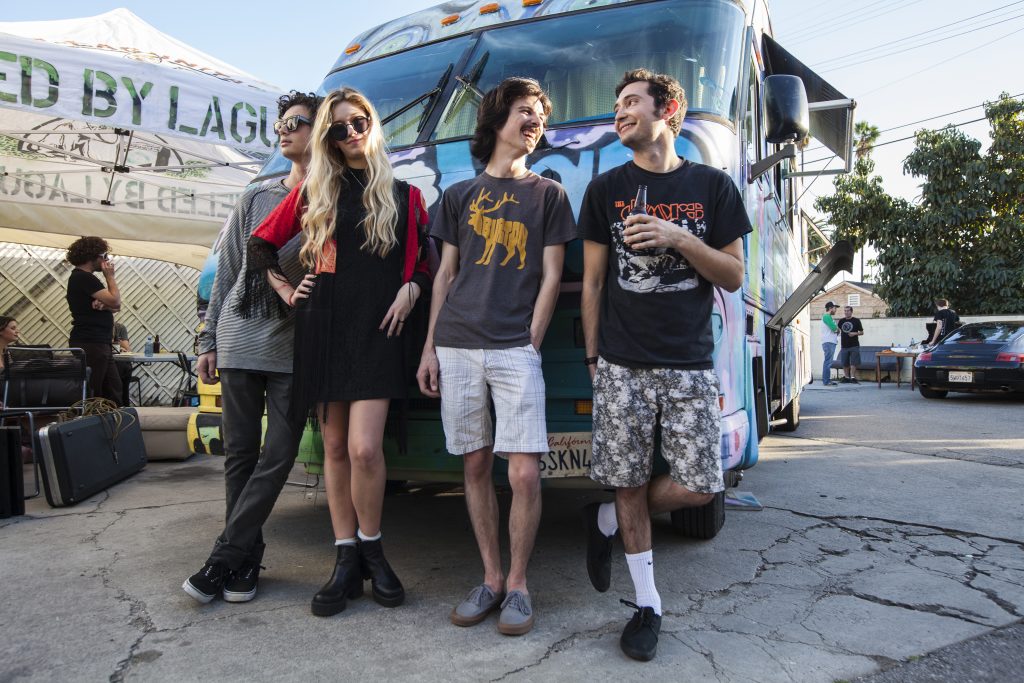 Jesse Harris finished off the day for us with some slower accoustic tunes.  Kind of fitting seeing as it was Valentines Day.  It got me in that emotional mindset to go and be all romantical for my special lady friend.  Which was a necessity, because doing anything but laying on a couch after a long day of Jamming in the Van is pretty tough.  Obligations, are obligations, and so I was obligated to go on my Valentines’ date, and we are now obligated to film at Cobraside as much as we possibly can.  Because they dug it, and we dug it, and I think you’ll all dig it.  You dig? 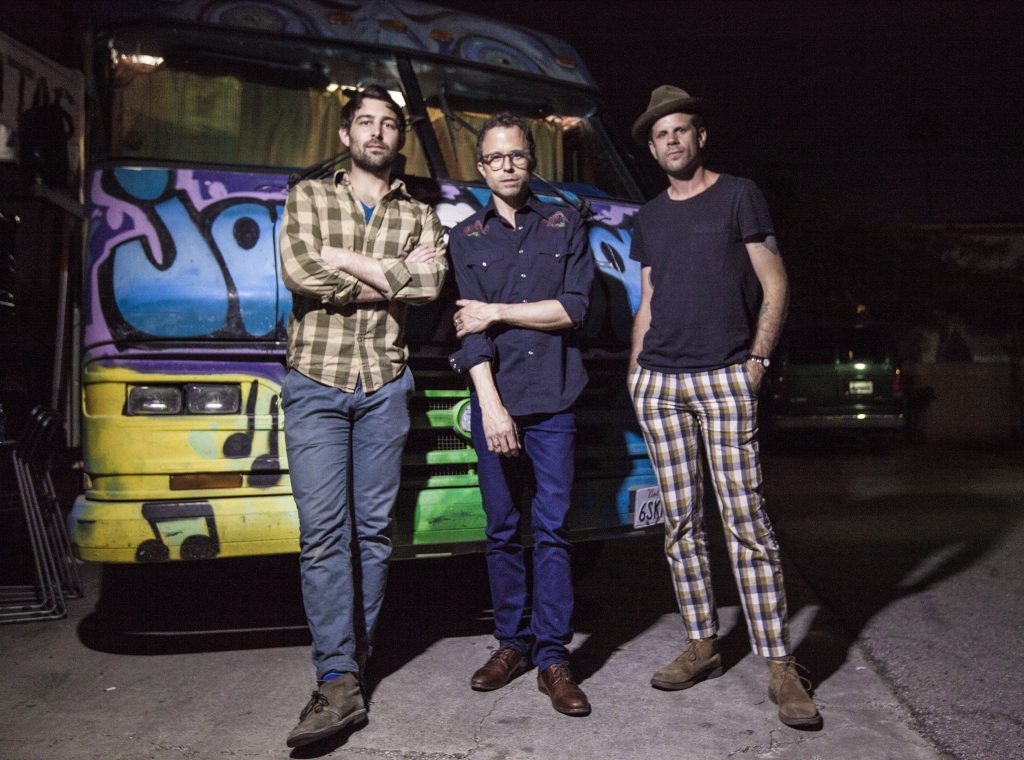 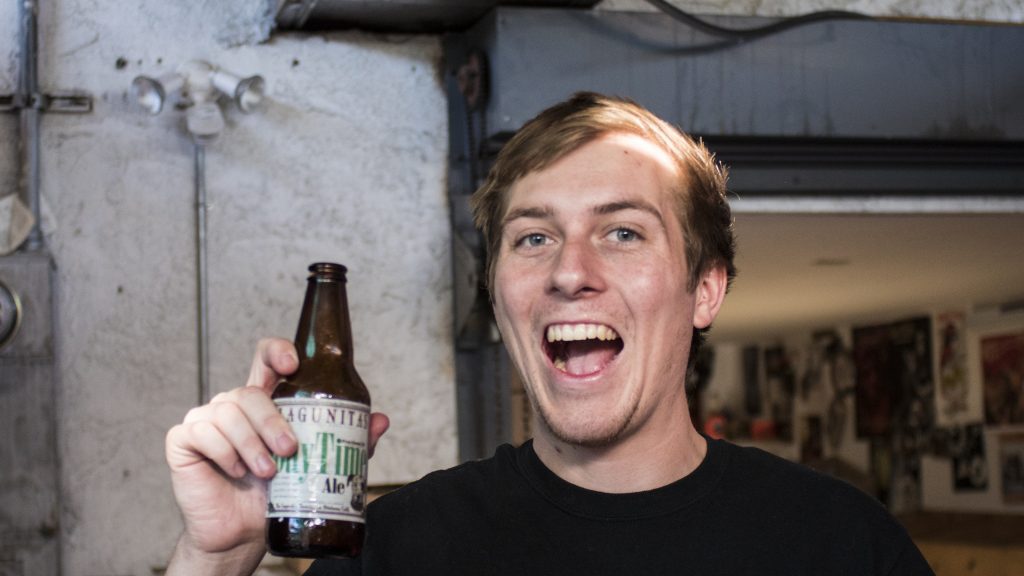 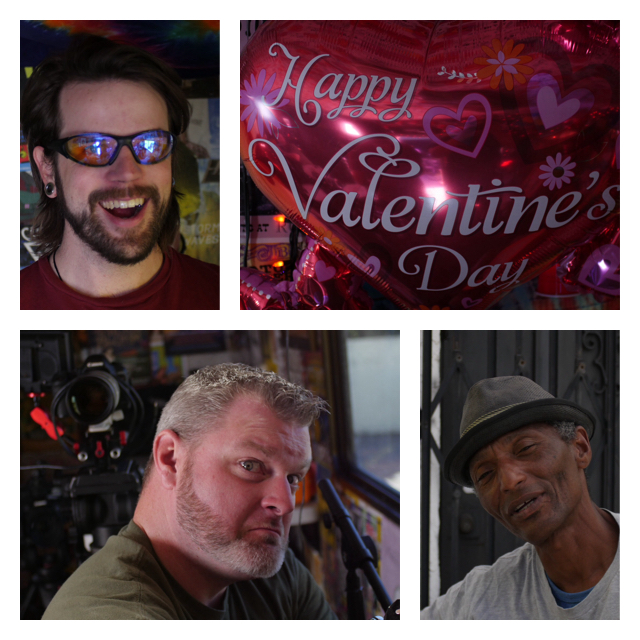 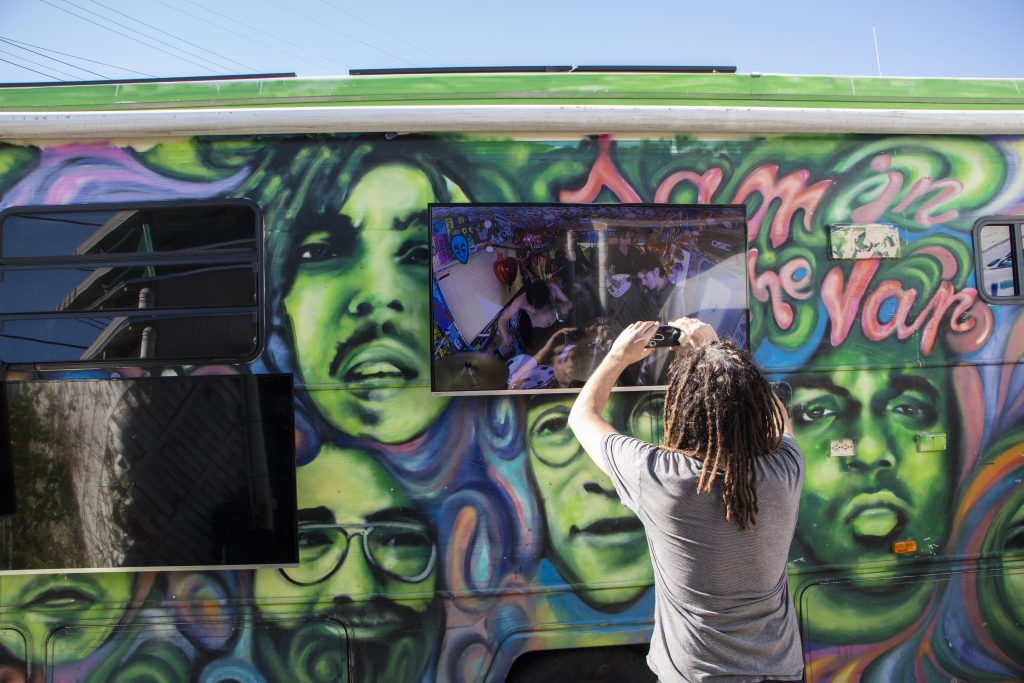 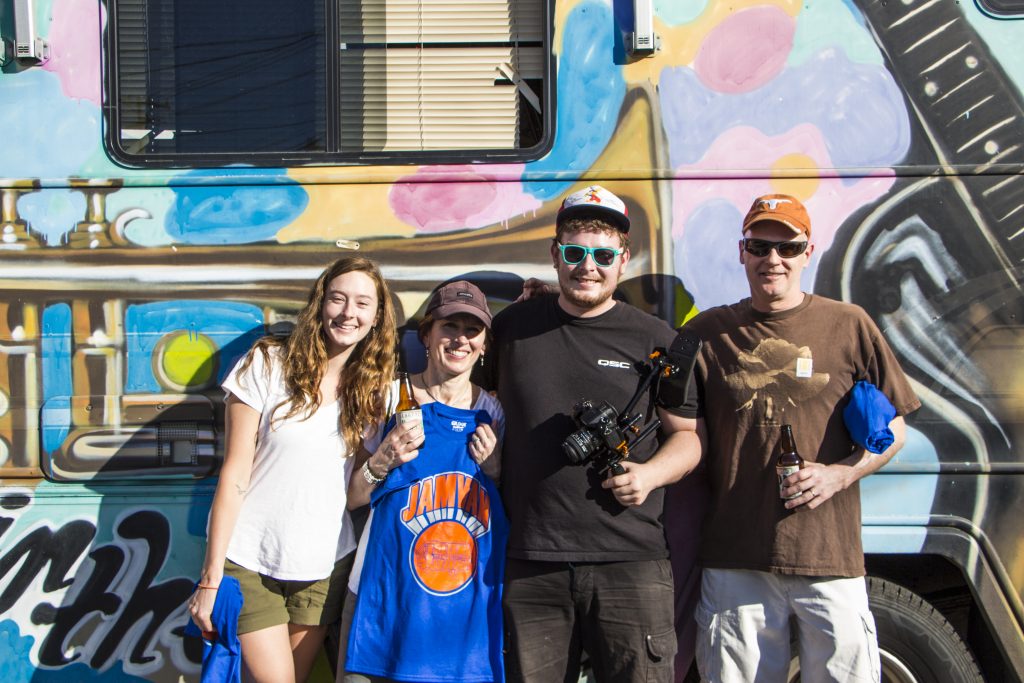 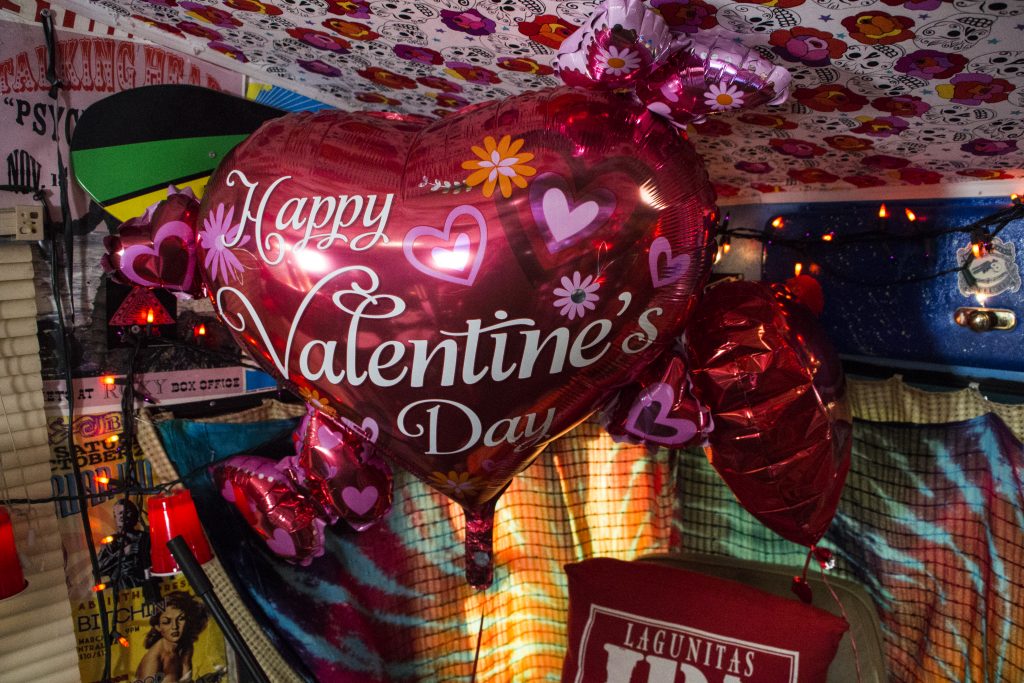 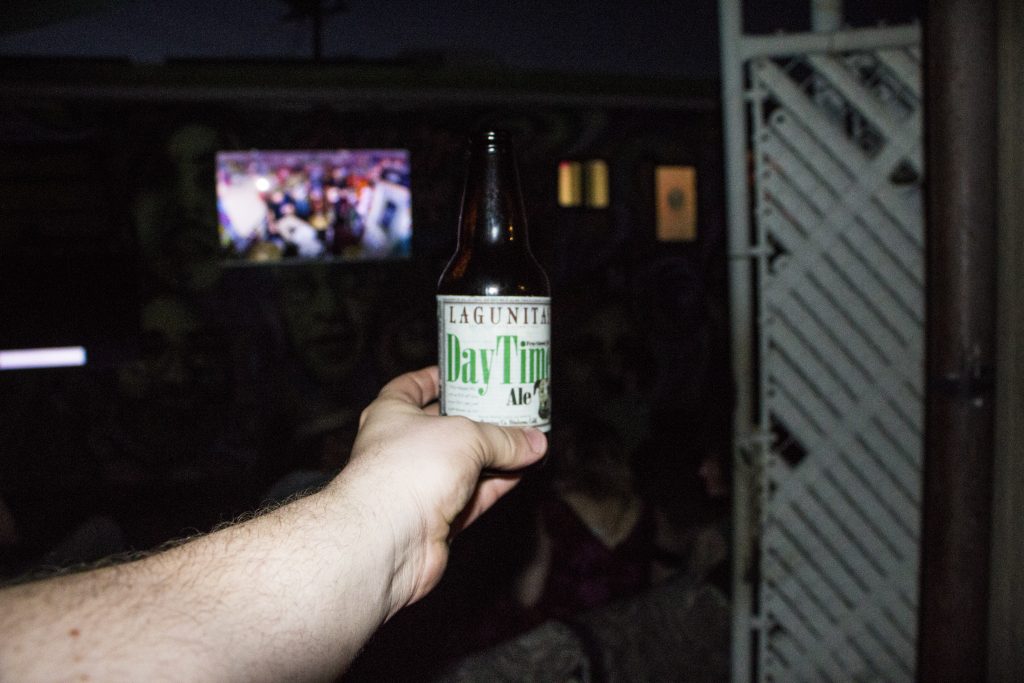