Oh California, you beautiful beast.  Wake up by the waves, go to sleep by the snow.   It goes without saying that this is the place for a Jam Van.  This is the place to set our cruise control and point our helm forward.  It’s inspiring, it’s mountains majesty, spacious skies, amber waves of grain, all laid out in a C shaped tract of land that was taken from the folks who found it first.   I’m not from here, neither is my buddy Dave or my buddy Louie, but we’re here now, and that’s where we had this idea to do this thing, because this is the place where ideas like that catch on like a vine.  Cling to the walls of your head and bloom.  So when we do set sail over this great state, it’s a fine thing to do.  The fact that cops don’t give you as much grief for driving a Technicolor dream bus neither, well, that’s a bonus

So on this run we headed north from our Los Angeles home-base.   Took the 5 Freeway, which albeit is less scenic of a run than tracking the Pacific Coastal Highway, but it gets the job done, and you see and smell a lot of cows along the way.  Once you get past that manure valley, and make it to The Bay Area, you forget the smell, there’s too much good stuff to look at instead.

Bottle Rock is a festival settled in the Napa Valley, aptly named because this is wine country, and the festival itself is full of winery vendors pouring their vino from between $8.00 – $20.00 (The PH tried to find and buy the most expensive glass,  and I think $20.00 was the tops).  There’d been a fear that the festival had been a one and done affair.  Apparently the inaugural event’s promoters hadn’t been the most stand-up of cats, but some really good folks have righted the ship and they put up the Jam Van Signal in the sky and we answered it.  The Jam Van Signal is actually a silhouette of Spud drinking a Lagunitas, in case you were wondering.

They gave us a lovely spot in the backstage area, eye’s distance from the main stage.  We had plenty of room to lay out our bean bags and build a couch out of boxes of Aquahydrate, which was something  new and different, but we keep the intern on his toes.  When he grows up to inevitably be some kind of masterful music executive, it’s going to be shit like this that he’s going to remember.  Building couches out of water boxes at music festivals is the type of shit that makes you great.  Steve Jobs did it.

Since we didn’t have enough water boxes to kill an entire day we stepped away from the festival grounds and took to Napa for the night.  For myself that involved wine, a hot tub and an eight dollar milk shake.  If you are wondering, no milk shake should ever be eight dollars.  Not even if the milk came from a golden cow.  I didn’t want to finish it, but I’m not leaving $4.00 of milkshake over. Anyways, I forget the name of the joint we ate at, but I recommend the $8.00 milk shake.

I opened my eyes upon Friday, which was the first day of the event.  Our first band of the trip were repeat offenders. We’d filmed Moon Taxi once before at Bonnaroo, years in the past. That was on their turf, this go around they were in California, more our jam, if you will. So they brought along reinforcements in the form of Karl Denson. It’s a beautiful thing when we get two acts to mash up in the van. A beautifully heady thing.

Mr. Denson stuck around to jam with his band, Karl Denson’s Tiny Universe. They fit the whole damn solar system in the van, and then some. Spudnik was overjoyed with this session, brother to brother, he had to give Karl Denson a hug.

Now, for those of you who don’t know, Jam in the Van was founded by two Jew-boys and a hillbilly. So, as spokesperson for the Jew-boys, I gotta say, it was an honor to have Matisyahu jam in the van. We didn’t say any blessings, just good old fashioned music. He’s got blonde hair now, but so did my grandpa, so he’s still a chosen head, no doubt.

That wrapped up our first day at Bottle Rock. All that was left was to drink wine and watch The Cure with Spud, he did not know any of the words to the songs, and for what it’s worth, neither did I.

Band number one on day number two was a name that we’d been hearing for the better part of the past year.  The Soft White Sixties have wanted in the van and they’ve been persistent about asking us to get in there and show us what they’ve got.  Our only hesitation had simply been location.  We’d never been in the same place at the same time.  They’re from Nor-Cal, we’re from SoCal, there’s all of those cows in between.  So when we finally caught up to them or them to us, we weren’t surprised by what they did in that van because we knew they were talented musicians who were going to bring some sixties vibed rock into the rig.

The second band on the second day of the second ever Bottle Rock was Kingsborough. They’re from Santa Rosa, CA, which if you don’t know, is kind of like a gateway to The Redwoods. If you still don’t know, that’s kind of like where the heady’s at. Google it, see what comes up. That being said, the band played to their roots. 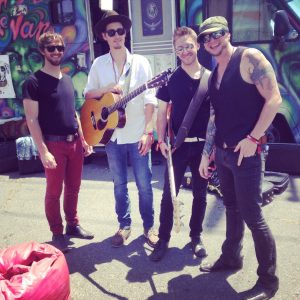 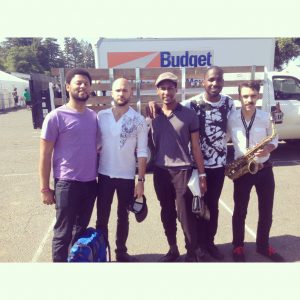 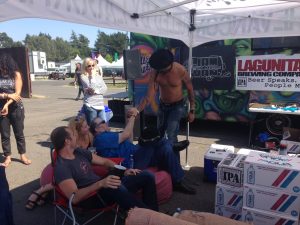 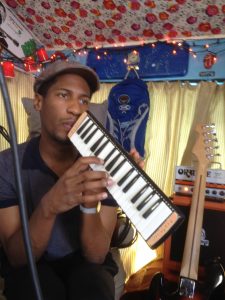 The art of smoove…

Mr. Popper as it turns out is one of the nicest dudes we’ve encountered on our journeys. From what I could tell he likes bean bag chairs, passing funny little cigarettes, and women. Those are all strong things to like, fyi. In other news, Michael Franti is friggin’ HUGE. Did not know that, know it now, I would not fuck with him, although he’s most likely a pacifist.

Mr. Popper hopped in the van shortly thereafter with Blues Traveler, and we all said to ourselves “I hope he plays the songs we want to hear.” He is a man of the people and so he gave the people what they wanted… Once upon a midnight dreary mahfughas… He sat down in Cuz’s Corner after the session and gifted Spud with one of his harmonicas. If you are going to get a gift from John Popper, you want it to be one of his harmonicas. 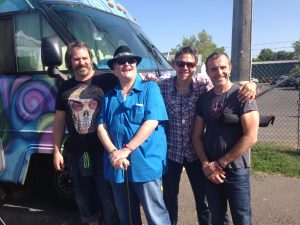 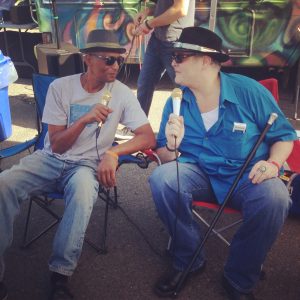 The day concluded with the fellows of Tea Leaf Green. I loved this band in college and I still dig them now. This was the second time we recorded them, the first was at South By Southwest in a convention center off of Sixth Street.  The setting at Bottle Rock was much more appropriate. They still haven’t played “Pretty Jane” for us, but I ain’t asked, and the three cuts they did more than sufficed. 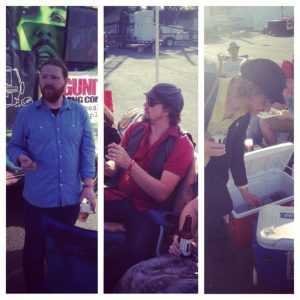 The evening’s main stage performance was highly anticipated. OutKast has been all over the place this summer on their reunion tour, yet we haven’t managed to catch them at a festival yet, so it was high time we did. Holy shit Miss Jackson, those boys can do the hip hops. Sometimes you go to a show and the music’s real good and you appreciate it for that, and sometimes you go to a show and it just blows you away because everyone is dancing, and everyone knows the words, and it’s just fucking fun. Yes, the music was great, but it was just so damn fun. The Perfect Hippie said it the best the other day when I was driving around with him, “there’s so much crappy shit that you read about, it’s so nice to just be in a big field full of happy people and all they care about is having a good time.” Amen hippie. 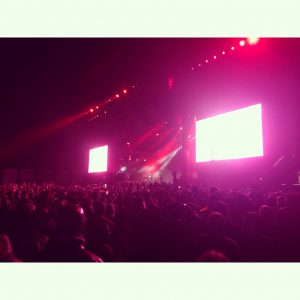 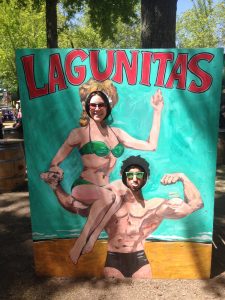 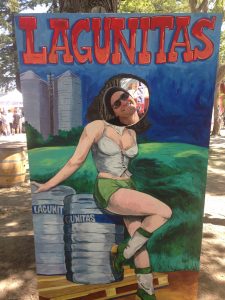 Our final day at Bottle Rock began with another local act, Grass Child. Their lead singer had purple hair and their band was as friendly as can be. They were super appreciative of the session and that’s always appreciated by us. Spud might have dug them the most, and if you’re thinking “well why’s he keep saying what Spud likes, who cares?” That’s kind of a big deal around these parts, or else you gotta listen to him complain all day. Don’t upset the dude behind the wheel. 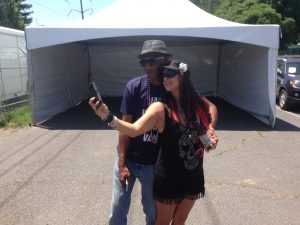 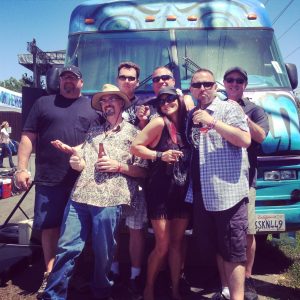 One girl a lot of dudes.

Some scheduling mix-ups gave us a big break in the middle of the day and then around 4 PM we wound up back in the 1990’s when The Spin Doctors showed up. They brought our new friend John Popper with them and he played harmonica on, once again, all the songs you’d hope they would play. As child of the ’90s and the heyday of MTV, I gotta say, Spin Doctors playing “Two Princes” in the van with John Popper was pretty phenomenal. 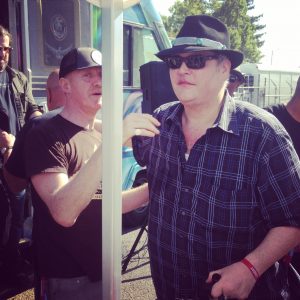 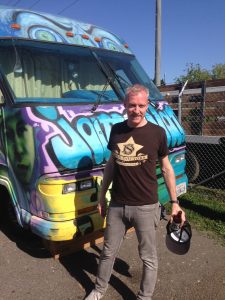 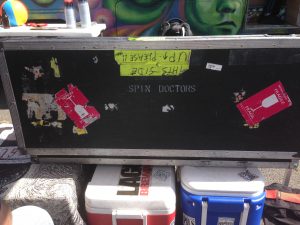 Last up for the day/weekend was The Stone Foxes who at this point we count as Jam in the Van Family. It was great seeing them play the main stage at the festival, and it was even better having them jam for a third time. They’ve got some new parts to the band, but they’re just as heady as ever. Furthermore, anytime a band tells you that you’ve done a lot for them and they’d love to return the favor, it hits home. That being said, they don’t owe us shit. We’ve got about nine amazing songs recorded of them over our three year history and that’s more than we could ask for. 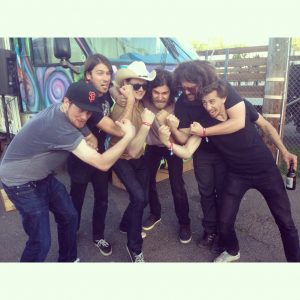 As for Bottle Rock, it was more than we could ask for as well. We’re glad the festival was revived, we’re glad we got to be a part of it and we’re glad we’ll be back next year. We weren’t super glad that the van broke down on the way home, but that’s what mechanics are for, right? As long as it gets us there, we’ll find our way back. 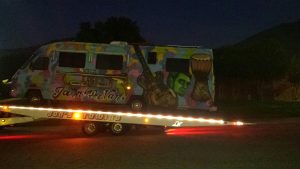 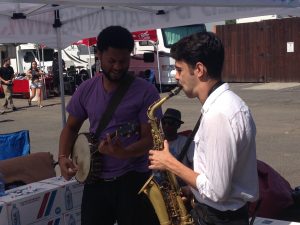 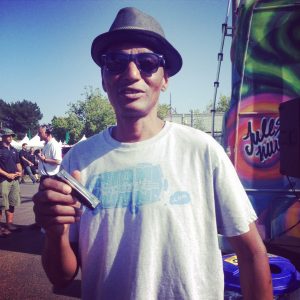 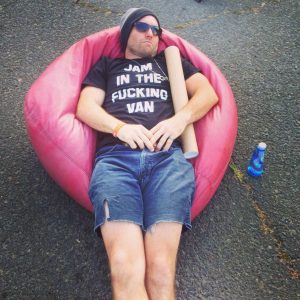