I did not plan on going to Bottle Rock this year, it was a spur of the moment, impulse decision, and I’m glad it happened. The festival’s debut was from my account, a success. I assume the organizers felt the same way as they put tickets for BottleRock 2014 on sale as soon as 2013 ended. Like literally ten minutes afterwards. That probably means that they sold a lot of $400.00 and $600.00 tickets, and that people bought a lot of food tokens and souvenir t-shirts. 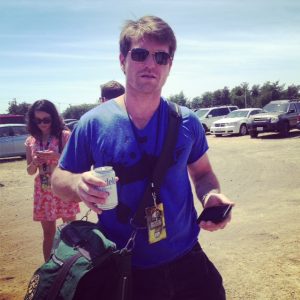 The setting was some sort of fair grounds right next to Downtown Napa, a quaint little town of wine bars and restaurants that was in no way prepared for the mass of people that would descend upon it each night when the festival let out at 10PM.

The food actually might have been the highlight of the fest for me. There were no grease wagons here. Everything came tagged as either organic, local grown, farm raised, gluten free, vegan or the like. I had halibut ceviche during Jane’s Addiction, because you know, festivals are famous for their raw fish dishes. It wasn’t too overpriced, but overpriced just right.

On Friday we found the one late night food-spot in town, a Chinese restaurant called Chop Suey. The food looked about as good as the name, but they were serving beer, and there were a bunch of drunks inside having a good time, so that seemed like a good decision.

We got beer and we got to see a fight so we were right about the good decision. Well, it was more of a hate crime, but a punch was thrown. Some massive skin head in a jacket with an “SS Death Squad” insignia got into it with a little fella who took offense to the brute’s incredibly offensive outerwear. The Neo Nazi in turn took offense to the little fella’s taking offense and punched him in the face. Some other meat-head dragged the SS Officer out of the restaurant and no further damage was done. No yuppies in attendance felt compelled to test their mettle against the offender, and in time folks went back to reveling. Except probably the skin head, who shouldn’t have been in a Chinese restaurant anyways, because I would think that skinheads wouldn’t support that, but who knows, they ain’t bright. 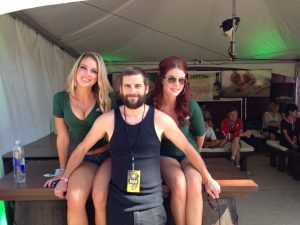 Not the afformentioned SS officer. 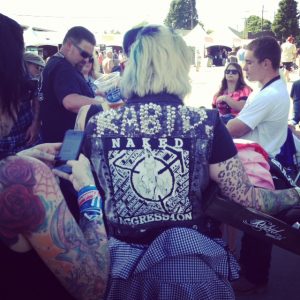 Also not the afformentioned SS officer.

Anyways, there was music at BottleRock as well. It wasn’t all food and drunken idiots. That was just a big part. The other big part were the performances, and the fest made it easy enough to get from stage to stage quickly so that one could catch all of the acts that you wanted to. The top five performances that I took in would be as follows:

1) Allen Stone – Sometimes afternoon sets at festivals are the best. It’s light out, nothing’s hitting you heavy yet and you’re just watching pretty girls dance in the sun. Allen Stone’s jovial afternoon performance was one of these instances. He bounced around the stage, sometimes guitar in hand, sometimes not, all the times soul coming out of his diaphragm. 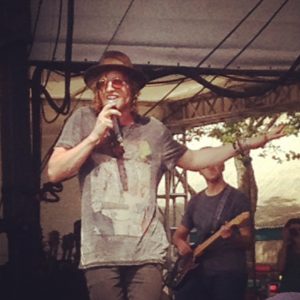 2) Jane’s Addiction – Jane’s Addiction is always a good time, they go hard in the paint. This set went from day into night. I watched it next to Matt Barnes from the Clippers, so now I know that Matt Barnes is a head. Bonus fun points for Perry Farrell being super turnt up and drinking wine out of the bottle. He was pretty vocal about his dislike for that creep who kidnapped the girls in Cleveland. It was his recurring banter, along with telling everyone to treat their woman right, he said that like a lot, it was fun. 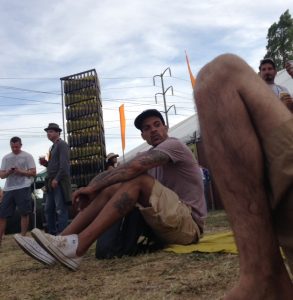 3) Mavis Staples – Mama is a diva and she was gettin’ after it on Sunday afternoon. Highlight was definitely when she had her assistant change her shoes for her in the middle of the set because she wasn’t feeling the first pair. Also can’t be mad when baby girl throws love to Levon Helm and Jeff Tweedy. 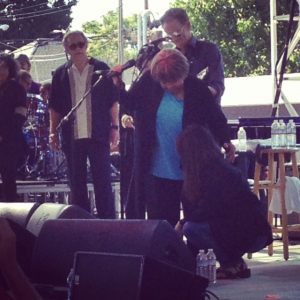 Kneel down and put them shoes on for mama girl!

4) Grouplove – This was just a fun time. They all have different color hair, everyone’s jumping up and down, lots of happy faces, nice work by the Los Angeles unit gone world wide. 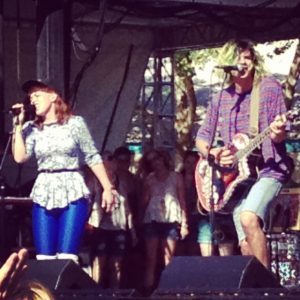 5) Charlie Musselwhite – I guess I’m just a sucker for good harmonica playing and old ladies (aka Doves) gettin’ their jig on. 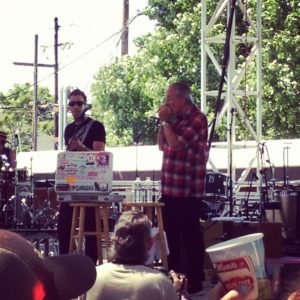 Honorable mentions to The Kings of Leon, Donovan Frankenreiter, and The Wallflowers… 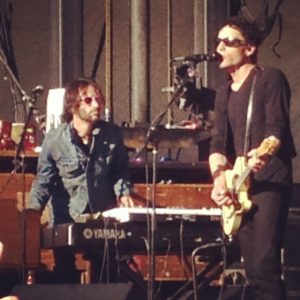 Head-shaker of the fest definitely came from the Bad Religion set. The lead singer wore a red collared shirt to perform and looked like my high school gym teacher, but that wasn’t even the head scractcher. I was more amazed by the fan with the baby on his back who was jumping around and head banging near the speakers the whole time, while his infant son clutched at his already ear-muffed ears. I don’t know if this was an “in agony from the noise” or a “how bad the band was” reaction, but he didn’t look like a stoked to be there baby. I guess there’s an interesting debate to be had about the practice of bringing one’s children to a festival. I’m usually not for it, because I don’t enjoy feeling awkward when I blow smoke in your kid’s face, but hey, I thought my dad smoked cigarettes until I was like 13, so kids will believe whatever you tell them. I think though, the baby at the Bad Religion show, yeah, probably gonna vote no on that.  Also, probably never going to bring my kid to a festival, cause that sounds like a drag, kids suck at partying. 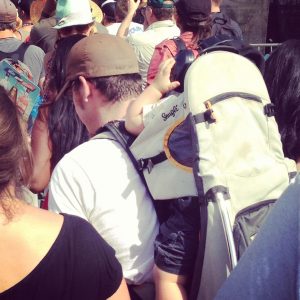 Father of the Year!

Of mentioning is the fact that at BottleRock, and most music festivals, the disparity between the 1% and the 99% is a perfect reflection of that same disparity in say, somewhere like Mumbai. In general the festival was working with a bit of a lack of space, and so the main stage area for the general admission crowd was far too narrow. People were definitely getting to know one another during the Kings of Leon show. It looked very sweaty from my vantage point. They had nowhere to spread out, while an ass-clown like myself was sprawled in the grass next to the stage and NBA player Matt Barnes, who definitely looked bummed out that Further pulled the no-show. 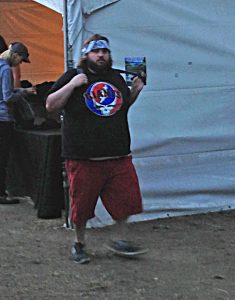 This guy was also bummed that Further pulled the no show… 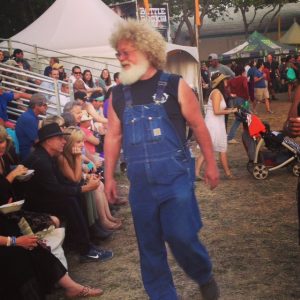 However, Jerry didn’t get the memo that Further wasn’t coming…

It’s like that at all festivals. Special people cut the lines, stand in the best spots for the shows, walk around with fancy passes, get free drinks, while the masses risk dehydration and overheating in favor of massive water lines, exorbitant prices, and crowded viewing areas that tend to smell of damp hippie and spilled beer. This won’t likely change at any point ever, unless the world becomes a happy place where everyone acts like they’re actually the same as everyone else, which they are (ed. note: I heard Jim James say that last part on the radio the other night, about people being the same, wish he had been at that Chinese restaurant in Napa). It doesn’t matter though, festivals will be fun, lines and all, as long as you make them fun. If you’re in a big field listening to music with a bunch of happy people, there’s really no reason to make them anything other than that. Cheers to you Napa, as a first attempt, this was a pretty good one.  Keep the wine flowing and the old ladies dancing and we’ll see you again next year. 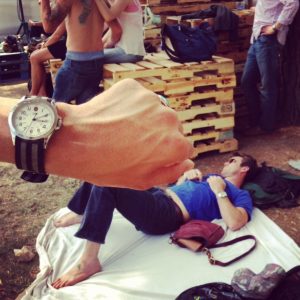 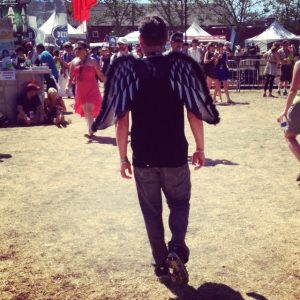 The dark angel of hippies was there… 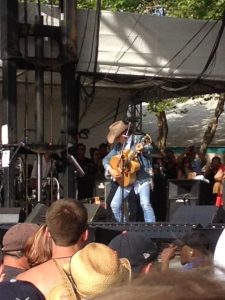 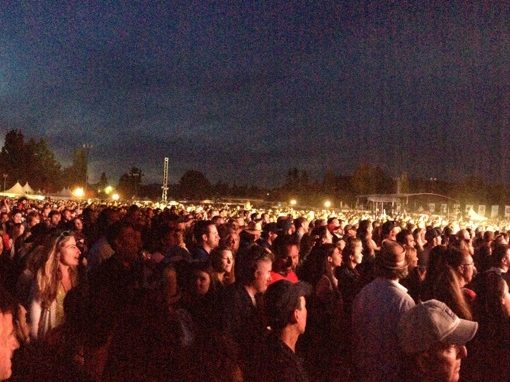 Crowd thickness at Kings of Leon 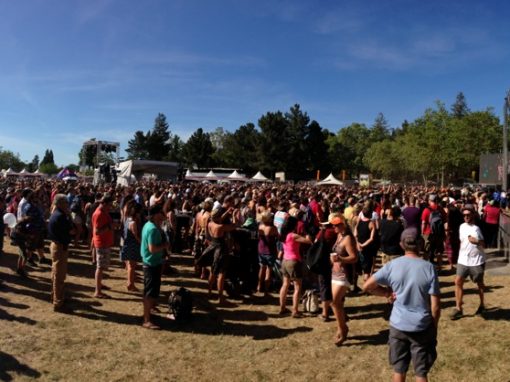 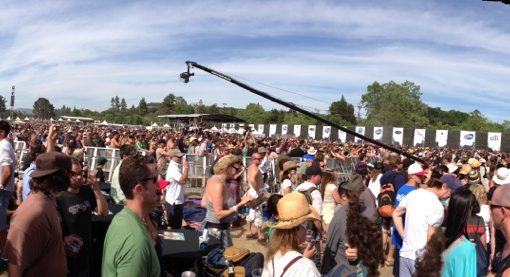 Look closely, do you see a Perfect Hippie digging at his nose?