We had pulled all of those wet tents and crap out of the Jam Van after Bonnaroo. They formed a ground cover over the back of my parents’ driveway for the better part of the three days that we lingered in Asheville. Folding the by then dry tents back into their respective bags was a bit more of a pain then laying them out had been, but they all went back under, bags got packed up, moms got hugged, and like, that beer city was in the tail-lights.

Through the Blue Ridge mountains we traveled. Steady at 60 MPH. This day’s journey was going to end at a roadside motel somewhere in the middle of the Bible-Belt. All the terrain must have looked like something on the other side of the wardrobe to my buddy Dave “Buddhaphest” Bell. He’d never been this deep south before. He was the dude in My Cousin Vinny asking for a grit. I wish we’d have lingered in more places than just truck stops and Waffle Houses on this skip of the trek. Would have been funny to see how those folks took to our technicolor van. Alas, we had somewhere to be, and so when the notion of pushing on until we got to Mobile, AL. came up at about 2AM we considered it. Then we realized that the in-between of where we were and where we were trying to lay our heads for the night was far too sparse a terrain to turn down the prospect of a sighted exit with a Super8 Motel.

We paid for a room this time. Didn’t swim. Just crashed and bounced come check out hour.

We crossed over that legit bridge into New Orleans around like, 5 PM if I recall correct. Arrived at the spot we were supposed to crash at around six. I had to pee straight off, so I didn’t really take inventory of my surroundings other than giving some hippie chick who greeted us a hug and asking if I could use her john.
After my leak I started to notice things.

Like how what I thought was a person on the couch in the foyer was really a manikin wearing sunglasses that had holographic marijuana leaves on them. Like how there was a fair sized iguana roaming about the house. “That’s Waffle, he’s a free man,” the hippie chick, told me. She asked if we were hungry and said that she’d made pork chops. I kid you not, these pork chops looked five weeks old. I called Kings of Leon to verify that the congealed substance that I was looking at was actually a food that someone had offered us to actually put inside of ourselves via our mouths. He confirmed.

You see we’d met our host via an OH (Old Head) music photographer whom the Buddhaphest has known for years. We had run into dude along with our buddy Craig backstage at The Roo. He promised to find us somewhere to crash in New Orleans. He made good on that promise.

This was certainly a place. It was not a clean place, it was not a safe place, it was not a place that I would take a shower in, or eat pork chops in, but it was certainly a place. Home-girl certainly was nice enough, meant well, told us she was in some horror-porn flick (Horn?) called Attack of the Cock Faced Killer. Said she filmed her scene in that very house on the very bed that we had sat on and talked to her upon. She was very open and friendly and introduced us to two of her friends. An “actress” with pink hair and a “hand-balancer” with blue hair. While this all seemed very down the rabbit hole-ish, the house more than likely had strands of Hepatitis and TB floating about, after about five minutes parked in her neighborhood the van got tagged with a Sharpie, and the hippie girl said that her roommates were addicts who stole stuff. So Beez told us we couldn’t stay there. Gorilla and I were down.

So we only lingered at that charming domicile for slightly over an hour. Sitting in the Jam Van waiting on the return of Brandon “SuperGood” Dorsky. When he arrived we split. Found our way into the New Orleans night.

Oh how I love the stink of those streets. Sweaty people with to-go cups from bars splashing into the cracks of cobblestones and pavement dotted with trash bags and minstrels, one as common as the other, sometimes both as stinky, but the minstrels far better a problem.

That night it was Tipitinas Uptown for us. The hippie chick from earlier was working the SnowBall stand outside. A SnowBall being like a SnowCone only it makes you drunk and you aren’t allowed to call it a SnowCone. I discovered that if I yelled absurdities at the hippie chick and demanded that she make me a SnowBall that she would undoubtedly do so. She made considerably fresher SnowBalls than pork-chops.
It was Free Friday at Tipitinas and the crowd was ripe with all sorts. The tourists who were told by a concierge that this would be a happening spot, the pastel clad fellows from the fraternity rows at the several New Orleans campuses and the girls that follow them, the slightly dusty musician looking types, the slightly clean looking musician types, the heads, the dreads, all sorts. All dancing, some arm in arm, others eye to eye, all fast and wild with the music.

They had to be, had to be full of energy, else the Stooges Brass Band, who was the headliner that night, wouldn’t be able to do what they did. How could they perform like that, repeatedly, night after night, if they didn’t receive equal energy back from the crowds that they played to? They couldn’t. It has to be a recycling of energy, which is only possible if the musicians are, simply put, good. The way they had these people dancing, you could not question whether or not this band knew how to do their hustle.

By closing time, drenched and disheveled bodies stumbled out of the sweat-stanked music hall, a good majority baring goofy smiles to match their ragged appearance. That is how a party should end.

Needless to say, none of us cuddled with an iguana named Waffle that evening. Beez had a buddy from college with a floor to crash on. That seemed to be the better option.

Track for the Day: The E. Normus Trio covering “I’m So Lonesome I Could Cry” by Hank Williams. Find it on their Soundcloud page. 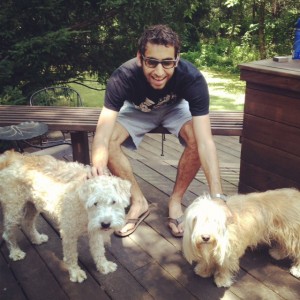 The RZA was not stoked about getting in the van and leaving the Betty Hound’s plush life. 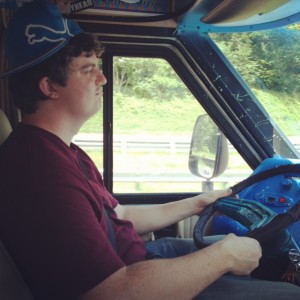 When you turn the hat sideways it means you’re about to Tokyo Drift. 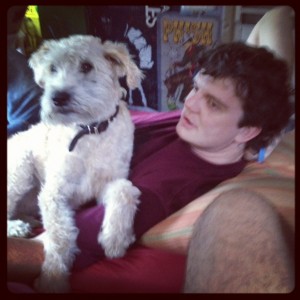 Sorry to disturb your spooning. Carry-on. 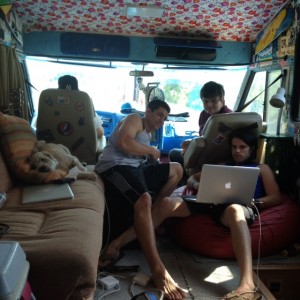 RZA seems interested in the first Bonnaroo video that Kings of Leon cut. 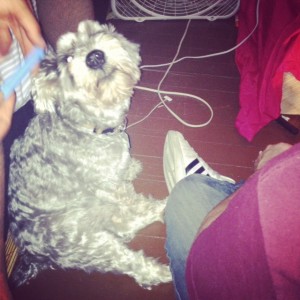 The hippie chick also owned this dude. His name was Cosmo. He seemed to have a better grasp of what was going on around him than she did. 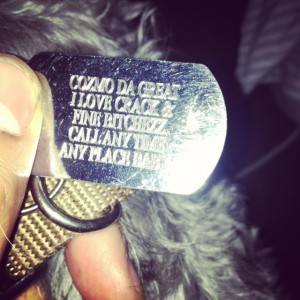 See, I told you his name was Cosmo. 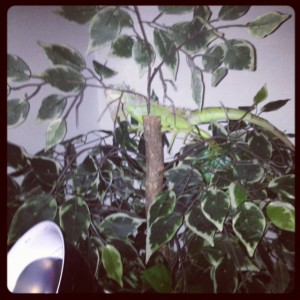 The conversations had between Cosmo the dog and Waffle the iguana… oh if only I could hear those. 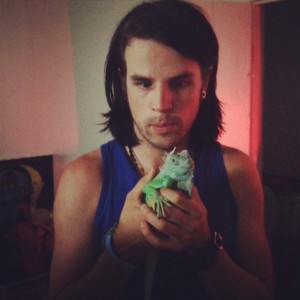 Both contemplating their next move and how they’d gotten where they were. 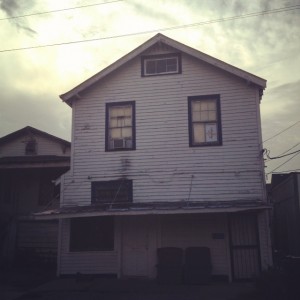