If you show up at Anders Osborne’s house on a Sunday morning and he’s out jogging, you wait. Even if the rain starts coming and you ain’t had a thing to eat yet, you wave to his kid who is cautiously scoping out your operation, and you smile, and you wait. You shoot the shit with his manager a while, you walk the dog, find yourself some ice-cream, a soda, and wait. You call mom, tell her you’re alive. Lay on the warm New Orleans pavement, which has already dried off the rain with heat, close your eyes a moment, open ‘em up because you hear a gruff and friendly voice. Sun shining in through slits you see his hair that’s caught between a dirty blonde and an aging grey.

Anders was accompanied by a man named Billy Iuso that day. Billy had hit us up on the Facebook months prior and continued to correspond as our project grew. It was pretty trippy that he kept-up, found us, and showed up to jam with Anders Osborne. I mean, hell, who knows how Billy first came across the videos, but then he ended up knowing Anders Osborne, and just randomly being there? I mean, the correspondence was “hey are you guys in NOLA.”
“Yes.”
“I’ll see y’all at Anders’, he asked me to come jam.” Ok…

Anders’ manager had already brought out the three guitars that he was going to shuffle through during his set. So when he’d showered off from his jog all he had to do was shake our hands, smile, hop-in, and tell some stories.

He referenced his torrid past often. It would be hard to hide it. You can’t wash off what you’ve been through. So Anders seems to wear it with an artistic pride. He lived through it, he ain’t dead yet, so he’s singing about it. His manager ran him a glass of water from the house before he sang “Mind of a Junkie,” it was hot, he was covered in sweat, and he was telling the most poignant story that he’d told so far that afternoon.

I’ve still got that cup somewhere. I found it before we left, thought about running it back to his house. I mean, dude was a genuinely nice guy. He gave hugs goodbye, took a picture with a Buddhaphest who was cheesing so hard, all blushy and excited. Yet, hugs aside, I figured he’s got a bunch of cups, and I’ve only got the one cup that used to be Anders Osbornes’. So I kept it. Sorry dude.

Track for the Day: 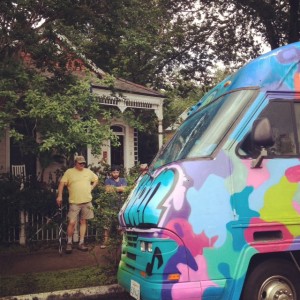 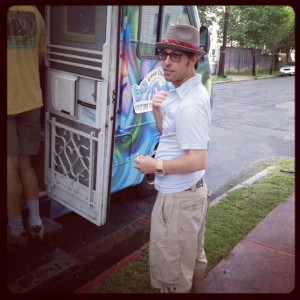 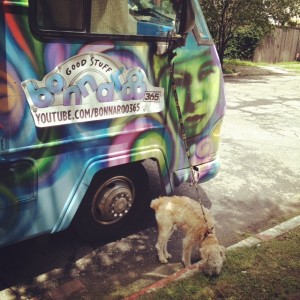 I was gonna leave him tied there like in the National Lampoons movie, but he talked me out of it. 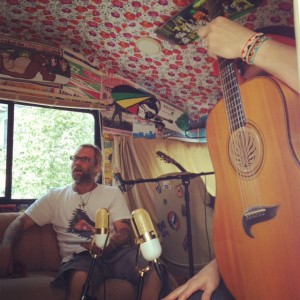 This is what Anders Osborne looks like fresh off a morning jog. 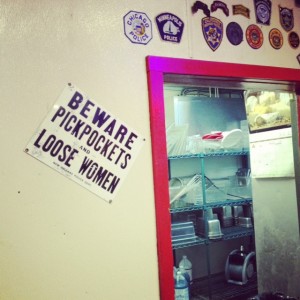