It was a hot morning rain. The type you don’t really mind walking in, except you’re still sticky from Tipitinas the night before and you could really stand a shower and a fresh pair of chonies. At least that’s where my head was at as I carefully staggered my way down the Van’s two stairs and into the New Orleans morning. I met up with Gorilla who was finding his way from another quarters. We found where everyone else was shacked up, did the clean ourselves routine and took our ride down to Frenchmen St.

We parked out front of the Blue Nile, a real legit spot. George Porter was doing it later that evening, he’s there every Saturday evening, that’s what I mean by real legit spot. The Backbeat Foundation set us up there, and lined up some phenomenal talent for the Van to swallow.

First on the day was a girl out of NOLA goes by the name of Sasha Masakowski. She’s seventeen, and she turns heads, and that’s not messed up of me to say, because, just go to her website, Facebook, check her Van session when it drops, see if your head doesn’t turn. She wore a pastel yellow sun-dress I believe, and it was real crisp looking against the dirt and drunk of Frenchmen St., even at that early hour of the day. The whole city has a bit of filth to it, and so then you’ve got these real beautiful parts that burst up everywhere and a lot of them are music, and these pretty little bursts of color just light that town up. Sasha Masakowski sprinkled a bit of that on us that Saturday.

As she serenaded inside the Van, George Porter rolled up to drop his equipment off at the venue and started chatting with the members of the Stooges Brass Band who looked like they might have just crawled out of bed, found their way to some grub, and sopped up the night before when they’d sweated up Tipitinas.

The Stooges had a show to make in Baton Rouge later that night, so we had to hustle them in there right when Sasha finished. Now mind you, that’s a lot of dudes, a lot of brass, a lot of drum, a lot of funk. We fit it all in the Van, and we fit the entire size of their sound in there too. The performance came replete with old ladies dancing in the street and telling the band they were “Creamalicious,” because they made her a tad moist. Her definition, not mine.

Then, cool as cool can appear, a pretty large dude with some pretty large dreads, dark shades, and a purple shirt with the image of a skeleton torso on it sauntered up carrying a saxophone. This was Khris Royal. He played third in the Van. If you like Jazz, if you like smoky rooms, and dark-lit hallways, and dancing to a rhythm that can change on instant, then I suggest you look him up. It’ll probably be intense for you too if you ever catch him playing.
Here’s a hint, he’s out there with George Porter a lot of Saturday nights in New Orleans.

That’s how we spent ours. Or at least the first part of ours. It was a long day, chilling on a couch on the side of Frenchmen isn’t as relaxing as it might seem. It’s hectic. The RZA got into a fight with a Chihuahua whose street musician owner threatened to kill us both. He is yet to make good on the threat. Then later in the evening my stressed out pooch bit the hell out of a drunkard who snuck up on him. Now RZA was just trying to catch some post-supper shut-eye on the sidewalk. He didn’t realize that the drunk was excited to run into the same guys who earlier in the day had let him mix together a concoction of their Jagermeister, vodka, and rum into a small glass flask. RZA had no idea that the dude was so exuberant because he saw that the same cooler of liquor still existed. I ended up giving him a bottle for the bite. Little guy doesn’t really pack much of a punch when he snaps, he just does it to be a putz.

Anyways, he got put on lockdown in the van, and we wandered from Porter, to some spot up a thin staircase where a middle aged woman was spinning some incredibly funky business in a red-lit lounge. I got lost in a funk trance for as long as I could stand, stumbled out with Gorilla and Kings of Leon, found ourselves some street chicken, and then closed the eyes. New Orleans can be hard on them.

Track for the Day: “Lectric Chair” by Sasha Masakowski. 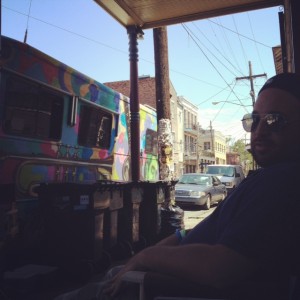 Brandon “SuperGood” Dorsky later admitted to having head-lock envy when he saw this dude pass by. 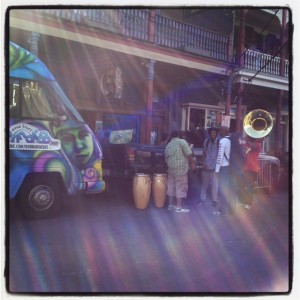 A bunch a Stooges, a bunch of instruments, one Van. 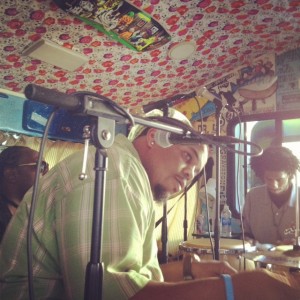 See, we just had to have everyone bend down to fit…