On this day we at Jam in the Van camp woke up to the gnarly riffs of Pujol in the Jam Van. Y’all need to dig on dude. I did not know of him until this year’s Roo, and now that I’ve experienced the sight that is his fingers crushing down on the frets of his guitar, I can in full confidence say that dude shreds hard. If you enjoy things of that nature, then check him.

At some point while Pujol played the van a group of “bandish” looking fellas came over to our area and asked if they could steal some of our shade. I said we’ll do you one better and offered them a cold beer and some bean bag chairs to relax. Give it about five minutes of shootin’ the proverbial with the guys and we come to find out that not only do they have an affinity for Coors, but they were actually the jam band ALO. So when you’ve got a jam band sitting outside of a Jam Van, well, that’s kind of a no brainer. You jam.

So that was our first ever impromptu session, and it was so excellent that ALO is going to be the first set we put out through our partner Bonnaroo365. It’s coming within’ days, so stay tuned on that.

Towards the end of ALO’s set the funky sounds coming from the main stage called to me and I had to go check out some of Charles’ Bradley’s performance. Dude wore an all gold jump-suit and a humungous smile for the entire show. When his time on the What Stage concluded he went out on the catwalk and hugged every fan he could get his hands on. That’s all you need to know if you’re wondering whether or not Charles’ Bradley’s set was good.

When I returned to the van I found none other than Gary Clark Jr. hanging out under our shade. Side-note, our spot had some quality sitting space and shelter from the sun, and our backdrop was so colorful that a lot of artists and publications chose to use it as their rest-areas and filming areas. To date we’ve seen ourselves in the pages of Relix publications, RollingStone, and on CNN, let us know if you see the Jam Van anywhere else. Anyways, back to the start of this paragraph, Gary Clark Jr. was chillin’ and I was in need of a beer, and since I only drink gluten free beers because the others tend to mess my stomach up, and that’s not a good look at the Roo, I was in need of a bottle opener, and the only opener we had was locked in the van where ALO was filming. So I had to try my beer with a cigarette lighter, a trick I had not yet mastered.

Mr. Clark watched me struggle with the lighter method for a minute or so before he took it up on himself to step in and teach me how to actually open the bottle with a lighter rather than aimlessly hacking at it. The lesson lasted about five minutes, at one point a nice dude from the Big Hassle Media camp came over to give me a pretty sweet bottle opener, because he said he couldn’t watch the torture anymore, but Gary said nah, “this is a teaching moment,” and I eventually popped that sucker off and enjoyed a lukewarm Gluten free beer with Mr. Clark.

Of what I saw that day in the fields, a lot of traces early… Traces of Flogging Molly, traces of Santigold, traces of Childish Gambino both performing onstage and making himself a panini backstage. I missed most of the goings on at the all-day-thrash-stage (self-dubbed). However, the Geologist was there from start to finish. He hung with some old and crusty roadie and reported that Bad Brains was bad-ass, Danzig was gnar and that Glenn Danzig got into a sweet fight with some dude backstage, stormed off, but still returned to perform his Misfits set, and all of it satisfied the Geologist’s inner metal-punk-roadie. Although I was betting that he would slip off with the Danzig Legacy crew at the end of the night and tour with them, he proved me wrong and made it back to us safely, beard un-harmed, a little bit sweaty.

After a re-charge at the tent I went and remembered the 1990’s and early 2000’s with The Red Hot Chili Peppers. I know they’ve been around steady since those years, and they played stuff from their new/newer albums as well, but it still was like a nostalgia situation for myself. I dunno if it was a great set, the consensus from Roo-goers seems to be that it wasn’t, but they played the hits, and their hits are fun, and man, I had a good-ass-time.

However, I have to give this particular Bonnaroo Saturday to Questlove. His set with the roots was as good as their classic Roots Live album, and the best Roots show I’ve ever seen. They played for an hour and a half on the main stage, and then Questlove and other members of the group reappeared later in the night in the form of a Superjam that also featured members of P-Funk, and the surprise appearance of R&B faded-hero D’Angelo. They covered Hendrix, Zepplin, Sly, The Beatles, The Band, Bootsy Collins, Johnny Watson, P-Funk, and man, it was friggin legitimately funky. Respect to the Roo for making that happen.

At some point during the UberJam the Gorilla, Kings of Leon, and Chach ran off to get a good spot to watch Skrillex from… They apparently stood right in front for that insanity. I viewed it from decently close, but still far enough back to maintain my sanity. Of that mess I will say that I anxiously await seeing what type of long term side effects those three fools are going to retain from having sat too damn close to that screen.

About an hour or so of Skrillex and my body started sayin’ “dude, enough.” I tried to make it to the GZA set, and physically I was there, for like, fifteen minutes. Sitting on the ground outside with the Buddhaphest. Thizz heads spinning and tossing glowy stuff to the back of me, GZA tuning up in front of me, and then slowly but surely droplets of rain trickling down from above me. A drizzle at first, refreshing, somewhat captivating when put into the context of the setting, the dancing, and the music, but then at the same time, I know the Manchester skies. A drizzle don’t stay a drizzle.

So to the tent young man, go to sleep dreaming dry thoughts, try to disregard the fact that the vinyl lining of your shelter is leaking, and hope that you don’t have to go to the porto-potty in the middle of the night. One day to go, sky shinin’ down like water.

Track for the Day: “Love You Right” off of Cherub’s debut release, Man of the Hour. 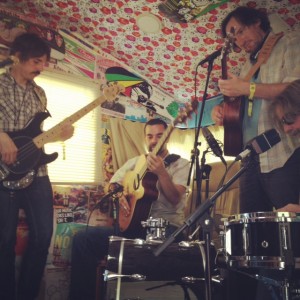 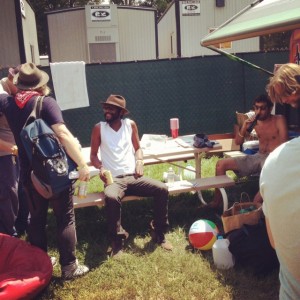 Solid Bonnaroo hat Gary Clark Jr. is rocking. Very practical. The sun is a mean sucka out there. 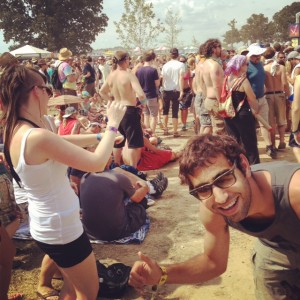 How about The Skrillex man? Just out there chillin’ in the general population the day of his show. What a chill bro. 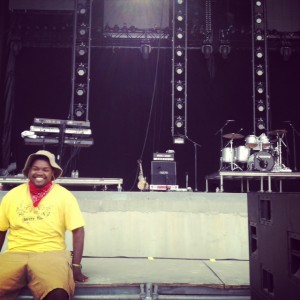 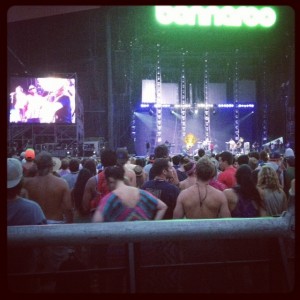 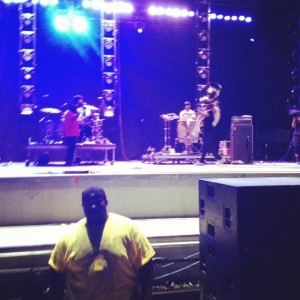 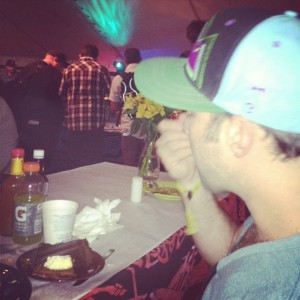 Look at this guy right here, this guy, he had himself double cake cause it was Saturday. What a guy.