I would start this post with a recount of where we woke up, but that would imply that we went to sleep. No, it was more of like a steady stream of jolting in and out of consciousness, mostly provoked by the Geologist running over rumble strips. He was on the 12AM to 5AM driving shift, finally calling it quits when, as he put it, his eyes “stopped seein’ right.”

California was long in the rearview mirror, Arizona had come and gone as well. By the time the sun dawned on us we were in the land of New Mexico, a place where every passenger in an RV must be wearing a seat-belt regardless of whether or not they are in the front or back-cabin. We did little exploration as to how this law would be applied if your RV has no seat-belts and only bean-bag chairs. Instead, we spent our time worrying about other things, like the correct height to put up our Jam Van basketball hoop so that we could play horse while driving. Not the safest call on our part, but hey, we were getting a little cabin feverish, as we were still on steady-haul-ass-mode to get us to Manchester by 9AM on Wednesday June 5. That meant no lingering-stops, no showers, just a bunch of stinky dudes entertaining themselves on the open road.

So we played horse, the “would you rather game,” drank a lot of spirits, had a lot of laughs, re-secured the art wall of the van to the actual van when it started blowing off in a massive thunder storm (ed. note: true story, almost lost the wall), and then by about dinner time, when we’d driven quite a bit further than we had expected to by that point in time and exhausted pretty much all of our entertainment options we decided to step out and have a little bit of excitement.

That came in the form of a magical place called the Big Texan Steakhouse in Amarillo, TX. The billboards for the Big Texan started about 200 Miles away. Their main point of advertisement was a 72 oz. steak challenge. While they would have had us simply at the giant cow statue that stood out front of the restaurant, the glutton challenge sealed the deal.

So at about ten minutes to closing time eight of us strolled into this Disney World-esque eatery, dirty and disheveled and thrust our chosen champion up onto their steak-eating contest stage. Our boy Beez who doubles as our Sound Guy and post-production whizz put on a hat of a different type this night. Setting in to tackle 4.5 Lbs of pure Texas beef, three fried shrimp, a baked potato, and a roll. They announced him to the restaurant, turned on a scoreboard timer that gave him an hour to complete the task, and live streamed the whole thing on their website. In the end Beez walked away with a T-shirt that said “I tried the big steak challenge and failed,” a water bottle shaped like a boot, and a slight stomach ache.

Now those of you saying to yourselves that this task would be impossible to complete for any man, woman, or obeast, well, I’ll tell you there was a dude named Nathan who sat across from Beez and took that whole sucker down with time to spare. At first I thought the guy was there by himself and that was pretty weird. Then we found out he was there with his mother in law, and that didn’t really change the fact that it was weird. But dude could down some meat, and he could tell a pretty funny story about some less than PG stuff, and he also had a ganrly scar that lead us to believe that his non-PG stories were probably pretty true. So anyways, people can eat 72 oz. of steak in under an hour, just not our boy Beez. Or rather, not our boy Beez “after eating a big ass sandwich” earlier in the day.

So we left the Big Texan, Yeaman at the wheel for the night shift, some questionably toxic energy drink as his co-pilot. He along with another satisfactorily creepy round of the “Would You Rather” game got us to Oklahoma at around 4AM, at which point we pulled into a rest area and fit ourselves like Legos onto the floor, couch, bean bags and bed so that we could finally catch a little well deserved shut-eye.

Track for the Day: “Red Heart” from the Album Into Your Lungs by Hey Rosetta. 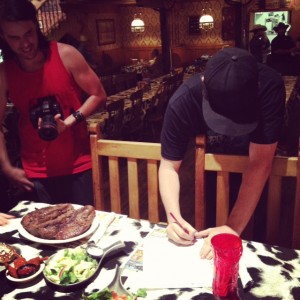 You had to sign a liability waiver to eat this piece of meat... #America. 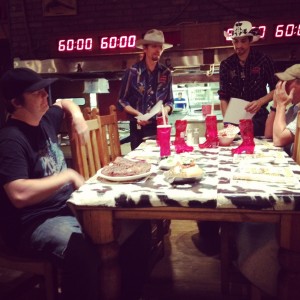 At this point it seems Beez felt quite confident, yet his opponent was praying... Maybe you'll take it a bit more seriously next time Beez... Oh, there will be a next time. 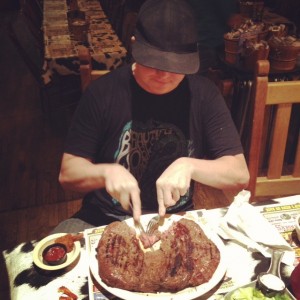 Still feeling confident here... "When I had about a quarter of it, and I was on pace, I was feeling good." - Beez before the fall... 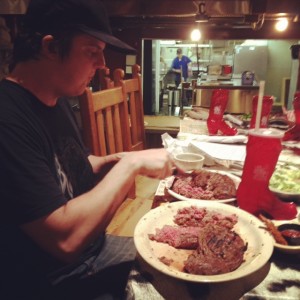 He sent some back to be cook a bit more, a strategy play. 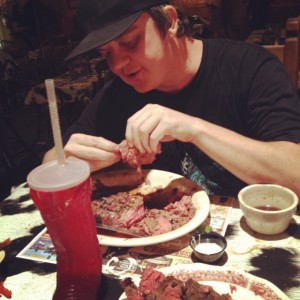 Right about here is where he went back and had his last shrimp and the rest of his salad, he was real excited about those shrimp. 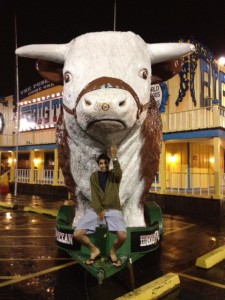 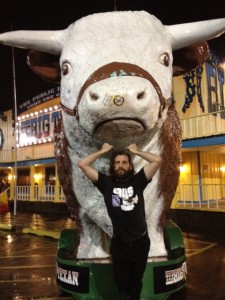 The last image in my head from The Big Texan... #Uncomfortable.