Our first stop en route home came in Indianapolis, where Morty tried his hand at being both the restaurant guy and the hotel guy.  It didn’t work out well, as he booked us a place called the Baymont Inn outside of the city.  The room literally smelled like fart and the shower flooded the bathroom.  I think Ethan beat me in Madden which was also not cool, but also as exciting as Indianapolis got on this run. 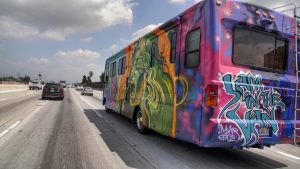 Back on the road…

The following day we decided to appease Ethan and ride through his home state of Missouri.  He took us to what I believe was his second favorite St. Louis BBQ spot (it was OK, better than Arkansas), and made us look at some stadiums, and that was St. Louis.

The real excitement was, believe it or not, in Springfield, MO.  I think that’s where Ethan grew up, I zone him out a lot. Either way, he has a pack of locals that still speak to him in Springfield.  Those locals set us up in a pretty solid hotel (see better than the Baymont sweets Indianapolis) and took us to a bar to get pretty drunk and eat hamburgers.  I won a cross dressing weasel out of the claw machine and Morty slammed Ethan’s finger in the cab door which caused Ethan to let out the most hilarious of screams (to me).  We met some dirty cabbies and got a driving tour of Springfield, in the words of Ethan (for lack of better ones), “it was badass.”

I believe for the entire trip we had averaged getting up and out of a hotel around 12PM.  However, for some reason, on the morning after we get plastered enough to slam each-other’s hands in cab doors, Ethan wakes us up a 8AM to have breakfast with his dad.  While the company was great, eight AM was not, but we got an early start which allowed us to be in Oklahoma around lunch time.  Which was coincidentally the exact time that I got a text from our buddy Kyle who makes our t-shirts and is always down for a good time.  He lives in Oklahoma, and as luck would have it, we were about ten minutes away from him.  He took us for some tacos.  Some people took pictures of the van, RZA took a dump.  Running into a buddy randomly in Oklahoma was good. It’s a small fucking world. 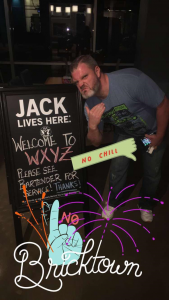 Don’t mess with Ethan in Oklahoma…

Amarillo, TX that night was not good.  If anybody knows why it’s always hard to find a hotel vacancy in Amarillo, TX, I’m all ears.  There are so many piece of shit hotels there and so few rooms available.  Every damn time.  We tried a solid ten before we ended up at a rat trap of a Days Inn.  RZA immediately dropped a load in the middle of our room, which was about right given the circumstances.  We were out of Texas quite speedily the following day. Also, assume from here out that Ethan cheats at Madden.

Of other video game chronicles, had we wanted to, rather than chronicling this ride by state, we could do it by episodes of Halo on XBox.  That’s because Morty played every damn one as we drove through that tunnel of the USA.  All four of them, beat every mission, killed every alien, saved the whole world.  It seemed like a pretty big achievement to us when it was all said and done with.  It’s still a big achievement.

New Mexico was next, so Morty got to ride through his homeland and take us to his old late night burger spot, but at mid-day.  It underwhelmed in a variety of ways and overwhelmed in just as many.  My favorite touch was the bug zapper in the far right corner of the dining room.  It reminded me of summer camp, because not many other places keep bug zappers in the dining room, it’s not a great look.   I always loved summer camp…  We had aspirations of staying in Flagstaff that night but we actually made such good time that Ethan wanted to push it to Kingman, AZ, and alas, Morty didn’t get to have a second float around at the Flagstaff crystal store.

The next stretch of drive was highlighted by the failure of our awning to remain fastened to the side of the Jam Van. It chose to do so right at the onset of what looked to be a fairly large storm. Morty and I had not ascended from the hole that we’d been wading through for days so to speak, and so I made the executive decision to cut the canvas part of the awning off with my pocket knife, as figuring out how to get the material to go back into a neat roll on the side of the road in New Mexico in a storm was not happening at that moment. So Ethan cut the tether. 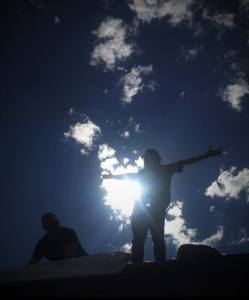 Morty Christ holding back the storm.

The only other highlight from that segment came late into the night as we approached our resting place for the evening. We were shuttling through some of our favorite (for various reasons) Jam in the Van sessions, when we landed on Joe Sumner, pop star Sting’s son. Joe had a pretty cool session, save for one thing, he played a song that clearly depicts some fucked up non-consensual stuff. So essentially what I’m saying, is that Ethan, Morty and myself were cruising down the freeway listening to a song about rape and it was pretty weird. That was just a moment, I don’t know if it means anything…

In much the same vein, I’m not sure who picked the hotel in Kingman, AZ, it was I believe the second one that we tried.  It was the right one for sure. A rare gem in between nowhere and California.  A tribute to some of the original cool.  Elvis, Sammy Davis Jr., Sinatra, a ’57 Chevy displayed out front.  The hotel bar, unfortunately closed, was a adorned with pictures of gals in poodle skirts drinking soda pop amongst the same pillars of the generation that had greeted us out front.  The hotel tried its best to make the courtyard feel like a cabana bar.  Their best fell far short in that effort but was pretty perfect for where we were.

Morty, RZA, and I were all pretty filthy.  Morty had been saving up a unique level of stink since Cleveland and RZA had long since been lost to doggie dread locks. I was pretty much hobbling and also out of clean underwear.  On the other hand, Ethan’s clothes and toiletries were still as neatly folded and stored in his small rectangle suitcases in much the same way they had been when we first set off. 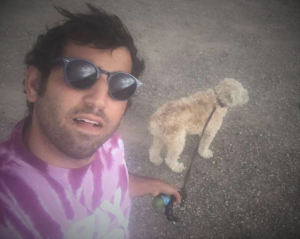 The night featured an equally low-res level of excitement. By that I mean we ordered pizza and played video games and it was fantastic.  There comes a point in a trip where that’s all you need to do.

Morning came, we had breakfast in the retro diner beside a table with two guys who looked like they were on the other end of their trip.  They asked us if we worked in sound recording.  I’m not sure how they knew.  Perhaps Ethan was wearing a gear company shirt or perhaps we were talking about recording, but they knew from something.  We gave them a little bit of info, but I think we probably lacked enthusiasm.  It was the downswing…

Breakfast concluded and we trudged back to our room to grab our things.  On our way we passed the maintenance crew preparing their cart for the day.  They were debating ways in which they were going to repaint a room.  It didn’t seem like they had an exciting time ahead of them. I guess this was my last poignant memory from the ride. Take from that what you want to.

The last stretch of drive was as all final approaches are. Part of you is excited to be home. Part of you is sad to be done. We hit our LA parking spot, said good time, good job, see you later, and that was another one done.

I tried to catch an Uber home but I ended up getting kicked out because the driver was not a super chill dude. Jack, who’d already been back at work for a couple of days gave me a lift. That’s how it ended.

I guess I owe a revisit to the thesis search I was getting at in paragraph one of part one of this entry. Something to the tune of me not being sure how to recap this past year of our little experiment. We are growing, and with growth comes change. We’re not a big dog, but we can’t go backwards. So much of our success is now determined by numbers. I, being someone who has never been good at math, find this at times to be difficult to cope with. I think the positive to take here is that what amount we’ve pole-vaulted as a result of our fire-sale on our DIY upbringing, has allowed us to possibly move past that window of necessity. By this I mean, I think we learned where we made mistakes and where we did some good and we’re at a point where we are able to make sure we focus on the good from here out. 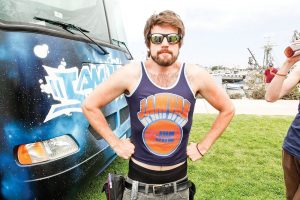 At it’s base, Jam in the Van is a good thing. We find music and we share it, it’s very simple. It has also always been meant to be a good time. Where we take this from here is up to us. Whatever means it took to share this music, I don’t think they’ve outweighed the good that we’ve put back onto the airwaves or the fun we’ve had. No part of making this Jam Van go across the country and record music in some amazing places was easy.

We’ve worked quite impressively hard at this, which leads me to believe that it’s a worthy cause. If that wasn’t the case then I don’t think you’d find so many dedicated and talented individuals putting their time and energy towards its success. Nor do I think that we’d have thirty-five million views on YouTube.

The ends justify the means. We made some sell-out videos, but we also made some great ones. I think even at our worst we’re using our imagination and creativity and helping inspire that in others, and looking around the world lately, those things are probably going to be more important than ever pretty soon…

So once again we rode around this country, that is every minute beating on our heads with horrible news and videos and sound-bites. We found really good music out there. People still give a shit about good stuff. Be it in New Mexico, North Carolina, Oklahoma, Ohio, or anywhere else, music is always good stuff…

That’s all to say, best of luck out there in this current mess. We find it best to turn your speakers up loud. All things are better when paired with music… Keep it Heady. 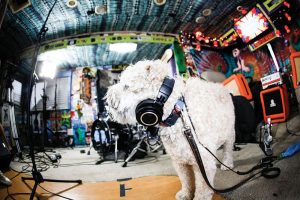 Catch up on all the videos from our Feast to the Beat 2016 cross-country road trip by checking out the playlist!