A Couch Trippin’ We Will Go…

If there’s one thing that we can say about our friends at The Lagunitas Brewing Company (there’s more than one thing for sure), it’s that they know how to throw a good party.  So when they told us that they’d be throwing a leg of their Couch Trippin’ extravaganza in our neck of the woods, Los Angeles, we didn’t even blink before saying “we’re there dudes!”

Last year we had a bit of a mess parking at the Austin Couch Trippin’ event, so this year we didn’t take any chances and showed up first thing in the morning to reserve our parking spot up on the sidewalk next to the venue, Mac Senett Studios.  Most all of our favorite Lagunitas characters were already on the grounds preparing the insides of the venue for the shindig.  Not that East LA is at any shortage for bearded people roaming the streets, but there were a few extras in the area that day, men and woman.

Lagunitas had two bands booked for the evening to play their show inside, but one of them was a bit too cool for the Jam Van (according to nobody but himself) and since one band does not a day of Jamming in the Van make, we had to call in some reinforcements of our own.  Enter The Suffers, an eleven piece soul unit complete with horns, bongos, and a lead singer who get’s the “girl can blow!” tag from our resident politically incorrect statesman, Spud.  He actually didn’t say that this time, but I know he was thinking it. 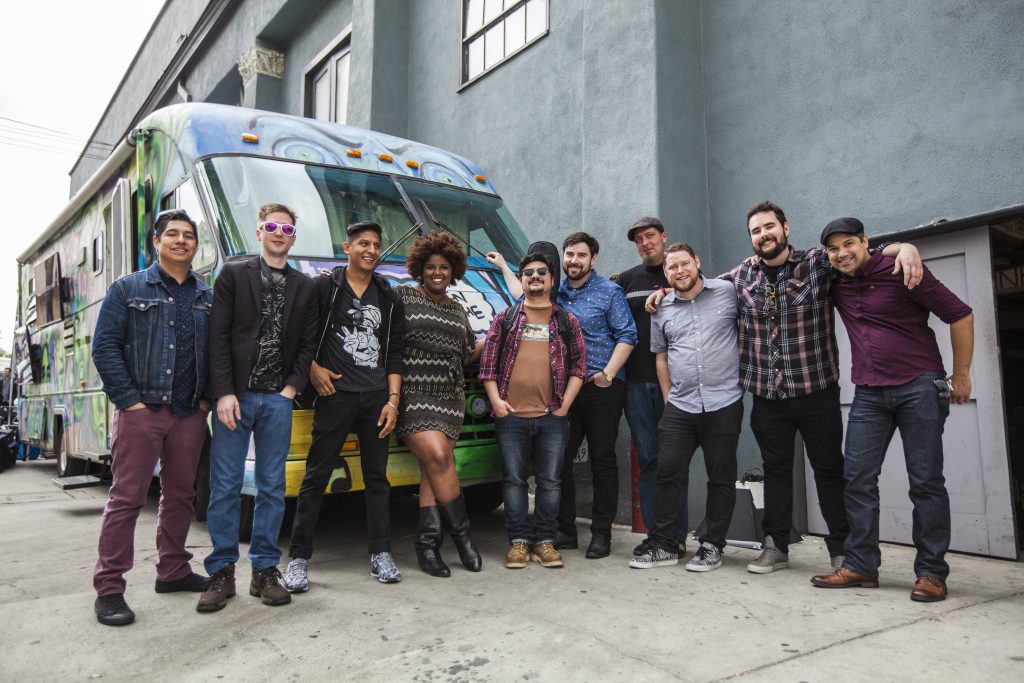 The Suffers were one hell of a way to get going in the morning.  Much better than coffee.  Although, I guess it was like noon, so not technically morning, but this is California, we operate on a different clock and calendar.  So starting off with the 11 piece means that it all goes downhill from there.  At this point, eleven ain’t even a challenge.  The Suffers thought it would be, but ha, we showed them.  They came out all smiles and hugs like they just had the time of their lives.  Which, hey, they might have.

The next group to arrive was Christian Letts, whose music you may be familiar with, as he is responsible for the writing on much of the Edward Sharp and the Magnetic Zeros’ catalog as well as the lead guitarist from that band.  Christian was at the van to perform songs from his solo project, but he made it clear, while sitting down in Cuz’s Corner with Spud that he wasn’t going solo, and that he’s still very much a part of the Magnetic Zeros and very proud of the work that he’s done with that band.  Nevertheless, his solo project, Letts, was jus as melodic and enjoyable as his work with the Magnetic Zeros.  The band performed three songs and on one of them the background vocal mics lost their power source and completely dropped out of the recording.  The band didn’t seem too upset about it and decided to proceed with the rest of the session instead of doing a re-take.  Luckily, through the magic of the Jam Van, we were able to turn up the levels on our room mics that we built into the ceiling of The Van and as my sound guy Sean says, it kind of gave it a unique echo.  The Van has that magic about it, whereby things that shouldn’t work out usually turn out ok.

While Letts was doing his thing a group of bros started sidling up to The Van.  Not to judge, but they looked like they were taking a break from their bong and somehow stumbled upon the Jam Van and thought “hey bro, trippy.”  Well, it turns out that they were our next band to jam that day, GRMLN.  It seems like people are really trying to make this no vowels thing a thing.  I don’t know who started it, why they started it, when they started it, but they started it and a whole bunch of bands have followed it.  There seems to be no correlation between whether your band has vowels in its name and whether your band is good.  Some voweless bands are good, some are bad.  GRMLN falls into the good category.  I’m going to chalk their no-vowel thing up to my earlier comment about them taking a break from their bong.  I think they may just be a bit lazy and having to write those extra letters seemed a daunting task given the alternative of not having to write them. 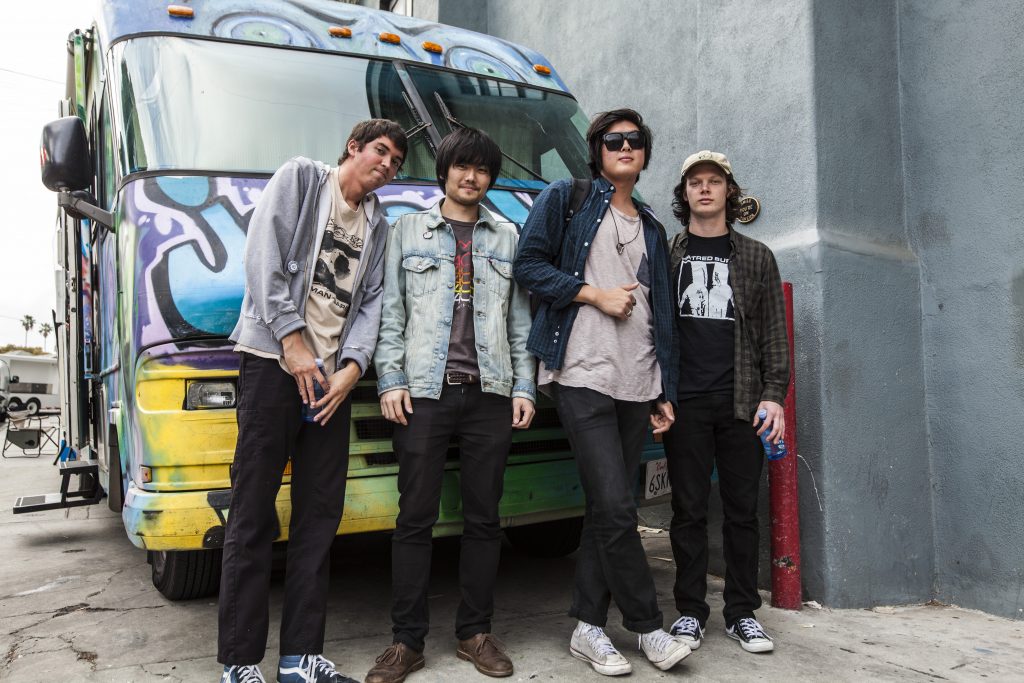 Our fourth band on the day had vowels in their name, Paper Pilots.  If they didn’t have vowels they’d be PPR PLTS and I don’t think it would really work.  They were a last minute addition to our lineup for the day when another band dropped out.  It’s nice to know that we’re at a level where people are so interested in playing in The Van that we can hit them up with very little notice and they drop whatever it is they had going on to come and get in our RV.  It was a Friday, so who knows what they had going on.  I usually wash both my dog and cat on Fridays, so I feel like they made a big sacrifice.  At any rate, I’m glad they did, it was an impressive session.  Some bands just have that ability to craft catchy songs that stick on your hums.  They dropped one that had everyone humming about being an arrow or some shit.  That’s a skill, making people remember your song and sing gibberish to themselves all day, that’s a skill. 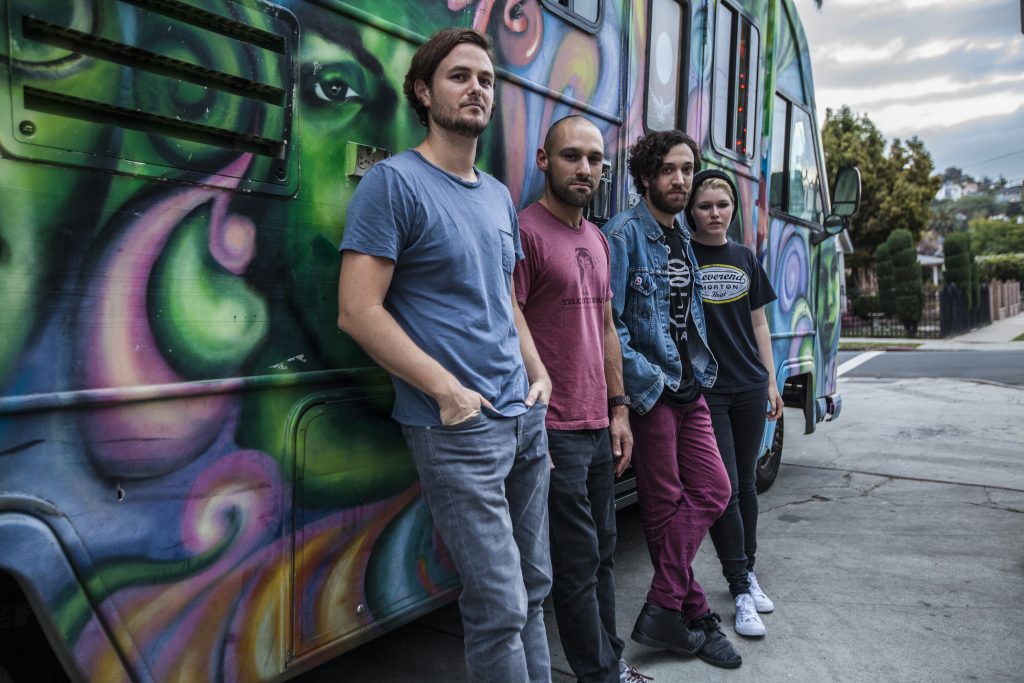 By the time Paper Pilots wrapped up the beginnings of a queue was forming full of eager bodies excited to get inside the venue for the Lagunitas event.  The line started at the front entrance to the studio, and slowly began winding its way down the block and around the corner.  By the time our next performer was ready to hop in the line had fully engulfed the block and looped completely around the building.  In short, it was a big ass line.  Lucky for us, when you close the Jam Van door the outside world dissappears.  So Sunny and the Sunsets were able to perform without notice of the massive grouping of thirsty people right outside.  Sonny gave us one song and then a, shall we say, half-enthused interview, during which he and Spud discussed amongst other thing, Sunsets, musical categorizing, and beer.  Then Sonny was off to perform inside for that anxious group of folks who were growing more wrestless by the minute. 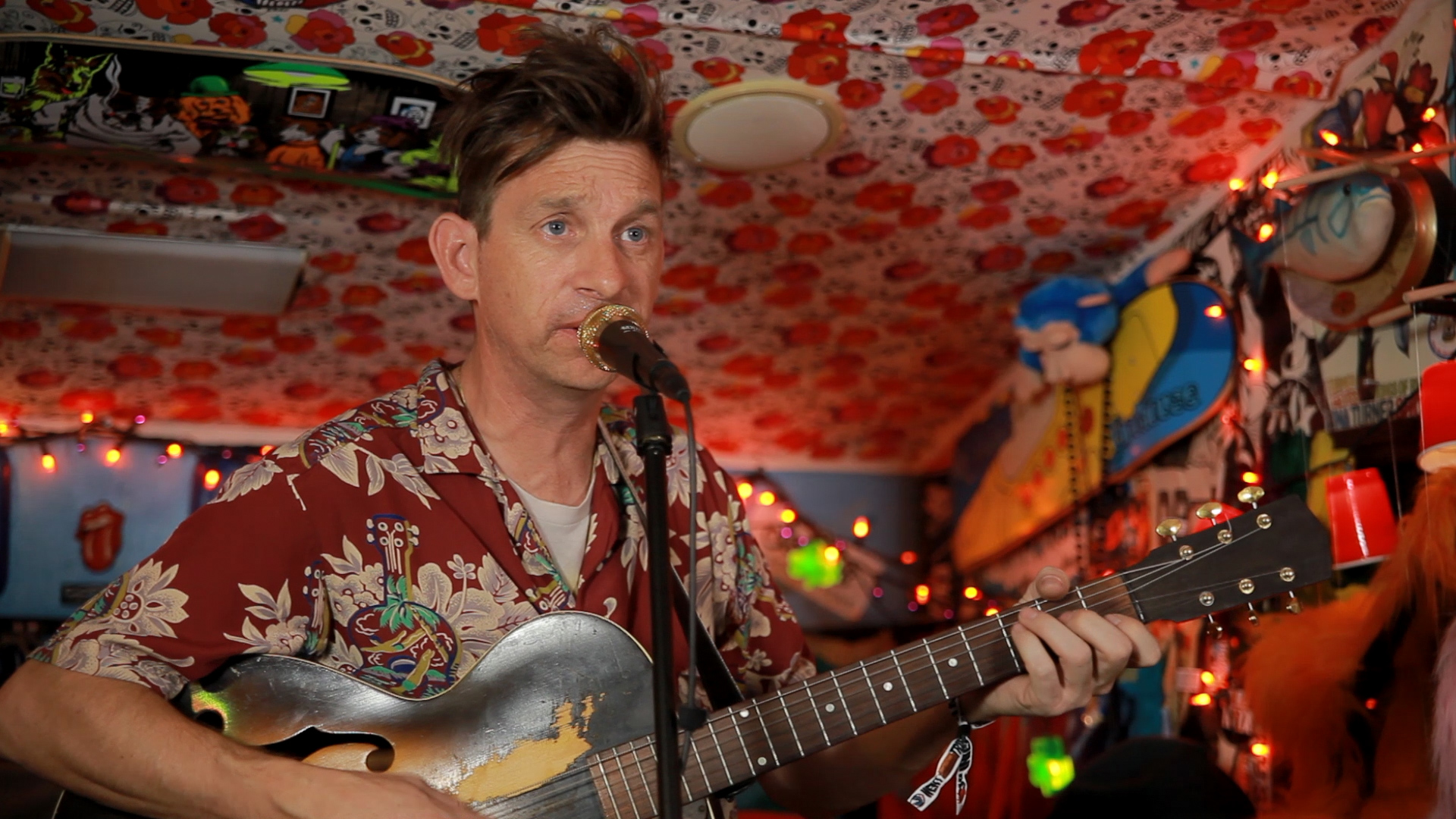 So wrestless in fact that the venue asked us to move The Van with much haste, so that it wouldn’t block the queue and cause it to swing out further onto the outskirts of the sidewalk.  That apparently is some kind of code violation, we know this because the Fire Marshall was in attendance and made it abundantly clear.  This was mostly a bummer for Spud, because additional parking for a smart car was literally nowhere to be found, so re-parking The Van was completely out of the question, and he had to high tail it back home to Upland.  This is a recurring theme now, where Spud gets black-balled from Lagunitas’ Couch Trippin’ events as a result of bad luck.  We’ll try again next year Spud-O.