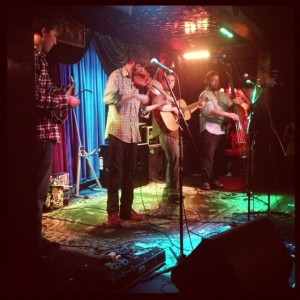 Now the Mint is admittedly not just any small room, and Head for the Hills are not actors, at least that I know. Yet their concert brought the same type of intimacy that you get when you see some thespian types transforming through their craft without hesitation in a really off Broadway type situation.

That’s what this show was like. It was four dudes who look like dudes you know from work or something, on a dimly lit stage, in a famous little room, getting lost in their own world through a guitar, a mandolin, a bass, and a fiddle.

I’d pegged this band as one to check out when I heard the track “My Angelie” on the internets. They played that cut around the eleven PM hour, an extended version, fingers flying over strings, Adam Kinghorn breathing out the words like lines in a play.

“Far from here there is a place where life is as it was, where living well means laying low, beneath the stars above.”

That song made the night for me. I mean, everything was swell, but headiness peaked on that one, close the curtain, take a bow. They didn’t, but, you know, they could have. 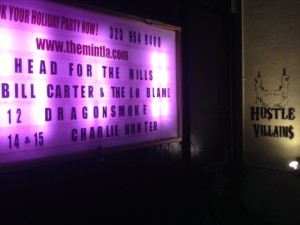 A lot of action going down at The Mint this month.