The What’s up on the What’s Been… 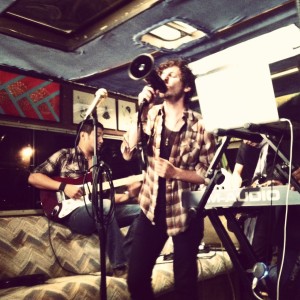 Mind the Gap becomes the first band to utilize a megaphone in the Jam Van.

For starters, we’re done with most of our maintenance.  New tranny (huh huh, yeah), new inverter (which allows us to record anywhere with no need for a plug), new mics, new computer, new paint job (Janice Joplin, Keith Richards, and of course Jerry Bear all Mucked on), as well as a new interior paint job courtesy of Zina Rubiner (aka Gorilla’s sister), which has rendered the van, including our Billy Big Mouth Bass toy quite neon by all accounts.  Neon is a good thing, no doubt.   Oh, and we’ve got new footage too…

In the last week we filmed The Far West, Communist Daughter, The Honey Island Swamp Band, and Mind the Gap.  Each band offered a sound unlike anything that’s come through the van prior, and each laid down sessions that are sure to impress.  The shoots went pretty smoothly, and aside from encountering an obese hobo with a yarmulke rambling to himself, there was really nothing out of the ordinary that went down outside of the Central S.A.P.C. and The Mint when we shot these bands.  Nothing out of the norm at all, just a bunch of bands playing music in a green RV.

I believe we’ll start churning those new cuts out sooner than later, all in heavy anticipation of our SXSW debut.  We’re now a mere month away, and I don’t think it’s really settled in yet as to how big of an adventure this is going to be.

The furthest we’ve taken baby girl out for a drive is to Pasadena.  Texas is several miles further from Venice Beach than Pasadena is, so, it’s a whole lot of “we’ll see what happens” about to take place.  What is for certain is that if and when we arrive in Austin, we will be docked in the convention center and we will be filming sessions every day of the festival. We’ve already lined up some great acts, and the list keeps getting better, it’s all very exciiiiite.

In closing, I’m sure you’re extremely anxious for my thoughts on the Grammys (ed. note: scoff your face).  Well, I’ll be brief, as I really only have two comments.  First, the fact that Chris Brown won is pretty wild.  I guess it’s cool that we forgive people and stuff.  I mean, I don’t think one should be crucified for making a mistake when they are young, lord knows I made at least thirty.  However, maybe he should have done something redeeming before he got to take the stage during “music’s biggest night” with his skinny jeans dangling off his ass, no? It would be one thing if his song was impressive, but if it’s auto-tuned singing you’re gonna have me listening to, you best-believe I’m wanting T-Pain in a top hat, not “Team Breezy” and some dudes dressed like rainbow colored flying squirrels bouncing around on an over-sized Lego set.  At least he was humble in his acceptance speech.  I think he thanked God and Team Breezy, which seems to cover most of the necessary bases.  If I win a Grammy I’ll probably make a similar acceptance.  Only I’ll just thank Young Jeezy, which should cover both of those two with just the one.

Second, and last, after seeing her performance last night, I am now more assured than ever that I want to marry Taylor Swift, I hope she concurs.

That’s all I’ve got. Happy Monday.

Track for the Day:  Whitney.  Sing it in the shower.  You know you want to.

– The hook-up from Brother Ali… (via Hip Hop DX)

– Come sleepover in the van next... (via Sleepover Shows)

– These guys always bring the rock... (via Stereogum)